Houston: US President Donald Trump’s campaign to subvert the will of voters and reverse his reelection loss to Democrat Joe Biden is taking hold among state and local Republicans even as it marches toward imminent failure — a demonstration of Trump’s power to bend the GOP to his will even as he leaves office.

Dozens of state lawmakers, elected officials and party leaders in recent weeks have endorsed and advanced Trump’s false claims, and in some cases called for undemocratic actions to reverse results. None of the moves have had an impact on the election results — and even Republican governors have certified Biden’s win. Still, activists say they see the so-called “stop the steal” campaign as the animating force behind the next wave of Trump-era conservative politics. 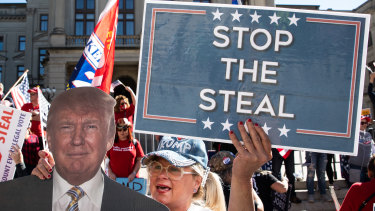 Demonstrators gather during a “Stop The Steal” rally outside of the Georgia State Capitol in Atlanta on Saturday.Credit:Bloomberg

“I definitely see a brand new movement taking shape,” said Monica Boyer, a former lobbyist in Indiana and early national voice of the tea party movement. “Was this election stolen? I don’t know. But people have the right to know.”

Signs of the power of that burgeoning political force have been building: In Pennsylvania, 64 Republican lawmakers — including leadership — have signed a statement urging members of Congress to block the state's electoral votes from being cast for Biden.

In Texas, the state's Republican attorney general has filed a lawsuit to the US Supreme Court demanding that other states' Electoral College votes be invalidated.

Even in liberal Massachusetts, five GOP candidates who lost their races filed a federal lawsuit on Monday trying to decertify the state’s election results, recycling claims about irregularities and voting machines.

Meanwhile, lawmakers in Michigan, Arizona and Georgia all hosted meetings with Trump lawyer Rudy Giuliani where they allowed hours-long airing of grievances over the election as the states certified results for Biden.

To be sure, such efforts have done more to build political support than overturn results. Trump and his allies have lost more than 40 times in federal and state courts. Tuesday is “Safe Harbor Day,” the federal deadline for Congress to accept the electoral votes that will be cast next week and sent to the Capitol for counting on January 6. Biden has already secured the 270 electors needed to win.

The president reached out twice last week to Pennsylvania House Speaker Bryan Cutler, a Republican, to press the state’s legislature to replace the electors for Biden with those loyal to Trump. Cutler told him state law prevented such a move, according to a spokesman. 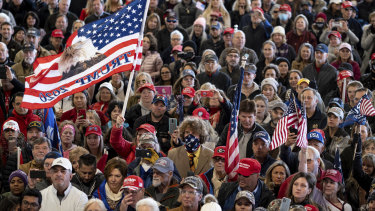 Supporters listen to speakers during the “Stop the Steal” rally with attorneys Lin Wood and Sidney Powell in Alpharetta, Georgia.Credit:AP

Still, Trump has succeeded in using his unfounded grievances to build political power. The president has already raised more than $US170 million ($229 million) since losing to Biden, requesting donations for an “election defence fund.” Most of that will become seed money for his post-presidency political career, going to a Trump-founded political action committee called Save America.

The president has shown he's willing to attack state Republicans who don't back his cause. Trump tweeted Monday that Georgia Lieutenant Governor Geoff Duncan, who had worried publicly about the spread of election misinformation, was “too dumb or corrupt to recognise massive evidence of fraud" and said he should be replaced.

Duncan replied Tuesday: “Thank you for 4 years of conservative leadership,” adding that Trump had proven that a “business minded outsider can be effective in DC.”

Some Republican groups, including state GOP committees, have grabbed hold of the Trump team's claims with both hands.

The Arizona Republican Party late on Monday appeared to ask supporters to consider dying to keep Trump in office. The state party's official Twitter account retweeted conservative activist Ali Alexander's pledge that he was “willing to give my life for this fight."

“He is. Are you?” the Arizona GOP added.

Some Republicans have spoken out against Trump's fight to subvert the results.

“It’s completely unacceptable and it’s not going to work and the president should give up trying to get legislatures to overturn the results of the elections in their respective states,” US Senator Pat Toomey of Pennsylvania told the Philadelphia Inquirer. Toomey has said he does not plan to run for reelection in 2022.

Many of those seeking a political future in the Republican Party have been far more careful in their criticism. Georgia Senator Kelly Loeffler this week repeatedly refused to acknowledge Biden's win, as she hopes to persuade Trump supporters to support her in her January runoff election.

Texas Attorney General Ken Paxton, a Trump ally, filed his lawsuit as he is under investigation by the FBI for allegedly using his office to help a wealthy donor, and while the president is said to be considering a slew of pardons and commutations before he leaves office.

Legal experts dismissed the filing as a long shot. The lawsuit repeats numerous false, disproven and unsupported allegations of illegal mail-in balloting and voting in Georgia, Michigan, Pennsylvania and Wisconsin.

Dale Carpenter, a law professor at Southern Methodist University in Dallas, noted that Texas typically files federal cases with a coalition of other states but in this case was alone. Texas Solicitor General Kyle Hawkins did not sign the petition, which is also rare for a state filing to the US Supreme Court.

“I do not believe this effort will be successful. In fact, I’m certain it will not be,” Carpenter said. “But the fact that it was even attempted is an indicator of some degree of erosion of our norms of politics.”

Trump celebrated the lawsuit Tuesday, tweeting thanks to Texas for "COURAGE & BRILLIANCE!”