A THIRD of ‘clinically vulnerable’ people admit they did not stick to Government’s shielding advice during coronavirus crisis, official survey reveals

More than a third of ‘clinically vulnerable’ people ordered to shield themselves by the Government admit they did not follow the rules to the letter.

Data from the Official for National Statistics show more than a million people most at risk of dying of Covid-19 left their homes or had visitors during Britain’s crisis.

The Government urged certain groups of people, including cancer patients, organ transplant recipients, and those with lung diseases, not to leave their homes during the peak of Britain’s outbreak.

Rules have been slightly relaxed now for those groups, but they remain the most at risk in the country and have been left out of rules allowing social ‘bubbles’.

The ONS report showed that 33 per cent of people in the shielding group said they were ‘mostly’ following the rules, compared to 67 per cent who said they definitely were.

Its survey also revealed that the shielding policy – intended to protect the most vulnerable members of society – hit some people’s mental health. 35 per cent of people, equal to some 785,000, said their mental health had worsened as a result of being stuck at home during the pandemic. 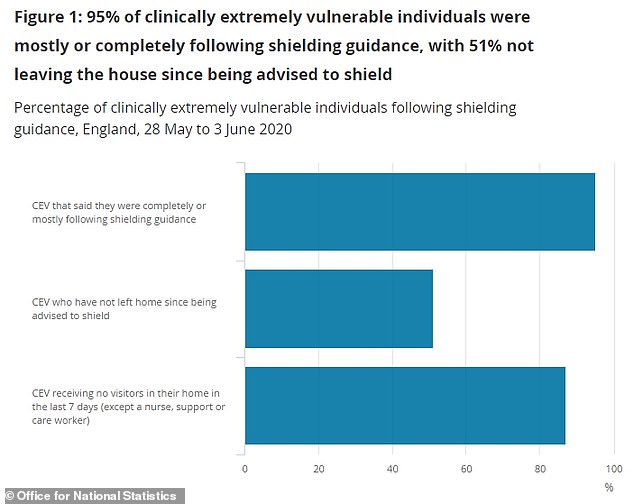 Only half of people in the shielding group said they had stayed at home completely, as they were advised to do, since the shielding guidance was issued

Tim Gibbs, a statistician at the ONS said: ‘More than 2.2million people were advised by the government to shield during the coronavirus (Covid-19) pandemic as they had been classified by the NHS as clinically extremely vulnerable.

‘While it is difficult to pinpoint the exact number of people who were completely shielding, 62 per cent reported that they were fully following official advice.’

The ONS admitted that it was likely the true number of people following the advice was even lower.

Almost half of the 4,149 people questioned in the survey – 49 per cent of them – said they had left the house at least once while they were supposed to be shielding.

The Government’s advice urged people to stay at home at all costs unless it was an emergency – they were asked to order their shopping online, forgo having visitors and ask people to drop things off for them.

A further 13 per cent of people in the shielding group, however, admitted they had received visitors who were not medical professionals.

WHAT IS SHIELDING AND WHO WAS TOLD TO DO IT?

Shielding is the highest level of isolating that people were advised to do at the peak of the UK’s coronavirus crisis.

It was recommended for people considered ‘clinically extremely vulnerable’ to Covid-19 because they have a serious illness or disability.

People who are shielding should stay in their homes and gardens at all times, unless it is an emergency, and have food and other supplies delivered to their door.

The advice has now relaxed a bit and people who are shielding can go out in public for exercise, for example, but should maintain strict social distancing and not get close to anyone from outside of their household.

People in the shielding group have been urged not to take part in the creation of social ‘bubbles’, which allow single-person households to join up with another household and interact as if they live together.

The shielding group includes these people:

The ONS report added: ‘Both behaviours are not consistent with shielding and would suggest that less than 62 per cent of people are completely following shielding guidance.’

Exercise was the top reason people left home while they were shielding, the ONS survey results showed, with 53 per cent of people giving that reason.

Appointments with doctors or at a hospital came second, accounting for 26 per cent of journeys, while almost a quarter (24 per cent) said they had gone shopping.

People’s mental health took a turn for the worse during the worst days of Britain’s epidemic, the survey showed.

More than a third of people who were shielding (35 per cent) – equal to about 785,000 in the population – said their mental health had worsened during lockdown.

Worsening mental health was a bigger problem among women than men – 40 per cent said their health had got worse, compared to 28 per cent of males.

And younger people were worse affected than the elderly, with 46 per cent of under-50s saying their mental health was worse, compared to 23 per cent of over-75s.

A separate report by the ONS today revealed that anxiety has surged across the population at large, with married couples worst affected.

People in marriages or civil partnerships who have reported they are suffering from ‘high’ levels of anxiety more than doubled in the first month of Britain’s shutdown.

Almost one in five (19 per cent) of people in long-term official relationships reported feeling this way in the final quarter of 2019.

One in four of these couples reported balancing work and homeschooling, compared to one in 10 of those who were single, separated or divorced.

Between 3 April and 10 May 2020 a higher percentage of those who are married or in a civil partnership also said that homeschooling was negatively affecting their well-being (8 per cent) when compared with all other marital status groups (2 per cent).

Pensioners aged over 75 were also twice as likely to be highly stressed as those aged 16-24, the ONS found, with part of the blame being attributed to reporting of their higher risk of serious illness and death from coronavirus, and also their higher levels of loneliness. 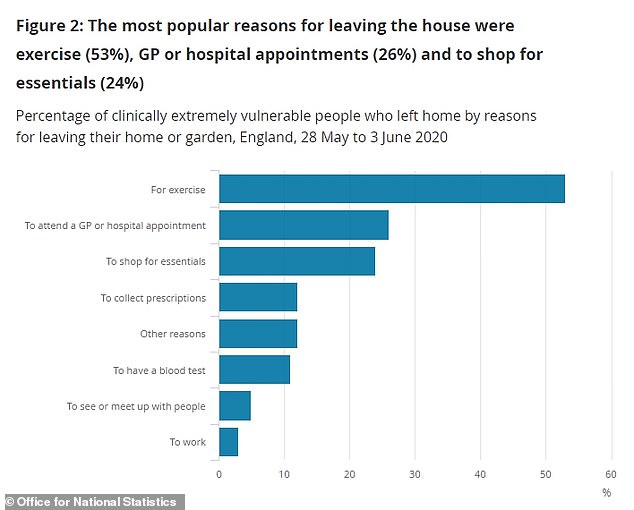 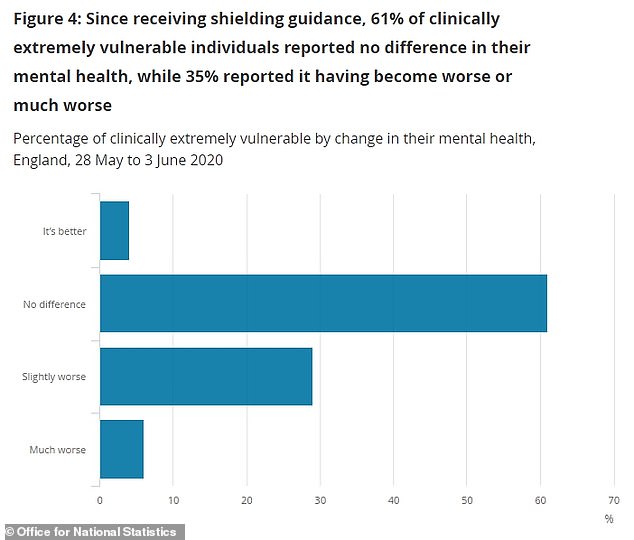 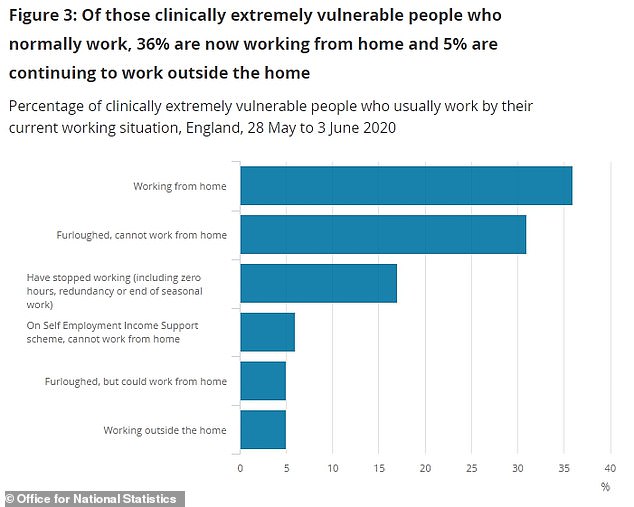 Both of these groups, married couples and pensioners, reported the lowest anxiety levels pre-pandemic.

Professor Simon Wessely, a psychiatrist at King’s College London, said: ‘It’s no surprise that people have become more anxious during the pandemic, but the size of the increase is very troubling.

‘The greatest increase is in those who are married or in partnerships, which is the opposite of what we normally see.

‘This may reflect issues around either home schooling, or home working, or both.

‘Another issue across the board is loneliness – which is not just about living alone, but that our need for rewarding social contact is not being met.

‘This is the wicked nature of a pandemic – it creates intense anxiety, but the measures that we need to control it, which centre on supressing our ability to interact socially, make it more difficult to manage that anxiety.’

Related News:
TV and Movies
Death in Paradise: What happened to Ruby Patterson?
This Country's Daisy May Cooper is unrecognisable from Kerry Mucklowe after very glam makeover
Robert Irwin Says Walking Sister Bindi Down the Aisle Was the 'Most Incredible Moment' of His Life
The Chase's Shaun Wallace hits back at 'nightmare' contestant after dig about 'gaps in his knowledge'
One Year After Its Big Sundance Premiere, ‘Palm Springs’ Is Still Changing Cristin Milioti’s Career
Recent Posts
This website uses cookies to improve your user experience and to provide you with advertisements that are relevant to your interests. By continuing to browse the site you are agreeing to our use of cookies.Ok