‘A weird sensation’: The bittersweet taste of finals success for Tigers superfans

He is excited, but frustrated. Nervous, but "flat". His yellow and black heart is ablaze. So is a confounding sense of loss.

Richmond is in another preliminary final and Richard Alford, a self-confessed Tigers nutter, so desperately wants to be "jumping around, grouse, what a sensation!". 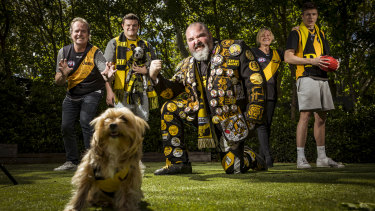 He wants to be among his fellow cheer squad members planning and building the banner for next week's game.

He wants to be folding his wondrous Richmond jacket, covered with badges and patched with all the club's premierships, into a travel bag and booking flights to Adelaide.

Instead, he's on the tools this week painting houses – for what else can he do?

It is the bittersweet taste of finals success – the joy of winning and fear of missing out – for Victorian-based superfans who, depending on Victoria's COVID-19 numbers, may not even be able to watch the Gabba grand final in the company of mates.

"I really want them to win [this week] so we can have a chance at going back-to-back," Mr Alford says. "But some part of me can't bear to miss the grand final. It's just a weird sensation, you know?"

It helps the emotional processing that his client this weekend is the Silk family – multi-generation Richmond tragics all the way to the pet dogs, Marley and Dusty.

Such has their bond developed since Mr Alford began doing odd jobs on their Malvern home about year ago, he was invited to the Silks' home to watch Richmond games during Melbourne's brief respite between restrictions.

"We keep finding jobs just to get him back," family patriarch Luke Silk says.

Mr Silk is working through his own feelings, but says the footy season, and Richmond's success, has been a godsend in an otherwise awful year. 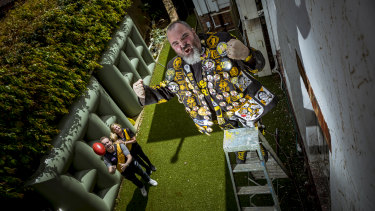 Richard Alford struck up a friendship with the Silk family, also mad Tigers fans, when he began working on their home about a year ago. He was given some time off the painting job on Saturday to speak with The Sunday Age.Credit:Chris Hopkins

"The AFL has helped us, being down here, by at least getting games scheduled."

Mr Silk's 22-year-old son Hunter, starved of footy team success most his life, cannot get enough of Richmond winning, no matter where it might be.

"It’s a weird thing, but it’s still good," he says. "You can’t complain – four prelims in four years – whereas growing up I was like ‘why do I go for Richmond? Why does Hawthorn always win?’ And now we are that team.

"It’s a different experience this year. At the games I’m always with my friends. This time around I’m watching with my family. It's still exciting."

Should the Tigers win the grand final, as many pundits expect them to do, there will no Swan Street madness like last year and 2017.

There will be no lining up at Punt Road on Sunday to celebrate among the players and the cup.

Mr Alford wonders if he can, in good faith, fill that space reserved on his leg – right next to 1980, 2017 and 2019 – for the tattooed signatures of captain Trent Cotchin and coach Damien Hardwick if he cannot taste the finals live.

But as Richmond march further through the finals, and after a mate suggested he listen to an interview with AFL legend Kevin Sheedy, his attitude is catching up to his passion.

"I was asked these questions a while ago and I was a bit negative on it," he says.

"But Sheedy said when the war was on, a lot of players had to go and fight. There were younger players and a lot of the stars weren’t there.

"They still played and if you won the flag, those flags were special.

"I thought about that and you know what? It’s true. Winning the flag this year will probably mean more than any other time winning the flag because you’ve had to do it the hard way.

"Whoever wins it this year, my hat’s off to them. But that won't make it any easier if we can't be there."