An unemployment statistic that goes uncounted: the long-term unemployed

Betty Patterson of Lakeland, Florida lost her job as a cashier at Dollar General in April 2020, and has struggled to find ever work since.

While relying on unemployment benefits, she managed to find temporary work for the US Census and then as a poll worker during the election, but like an increasing number of Americans who lost their job at the start of the pandemic, she still remains unemployed.

“I have to go sit in line in my car for at least three hours every Friday at the local church for food,” Patterson said. “If it wasn’t for the unemployment benefits I have received our family would have been living with no power or food. I fear for what’s going to happen to us if someone up in Washington DC doesn’t help us with another stimulus.”

Millions of people across the US continue to face unemployment, as the number of jobs in the US remains at more than 10m fewer than prior to the pandemic in February 2020.

More than 25 million workers in the US are suffering from the coronavirus economic downturn, including those on unemployment, workers designated as having left the labor force due to the pandemic, and workers who are still facing cuts to work hours and pay because of coronavirus.

As a massive jobs deficit faces the US, long-term unemployment among Americans who have been out of work 27 weeks or longer is growing, with an increase of 1.2 million people in October to 3.6 million Americans. 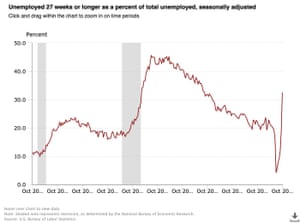 “Long-term unemployment doesn’t count into the unemployment rate,” said Michele Evermore, senior policy analyst with the National Employment Law Project, as the 6.9 % unemployment rate touted as a success by the Trump administration doesn’t include those considered out of the labor force or under employed. “We’ve seen in the last two months the two biggest increases in long term unemployment in history.”

Sarah Diemert has been furloughed from her job as a bartender in Bellevue, Washington since 14 March, and her furlough date was extended initially to July, then October, and now she isn’t set to return to work until 31 December, though another furlough extension is possible and her latest furlough notice mentioned the possibility of layoffs.

“Unfortunately, I live in one of the most expensive zip codes in the country, have no savings, and was already living paycheck to paycheck,” said Diemert. “I’m not at all able to afford rent. My rent is about $1,800 and I went from making $1,200 a week to $425 a week without the federal extended benefits. I’ve been reading the news every day hoping for a relief bill to be passed or at least an eviction moratorium. It feels like we’re being forgotten.”

Benefits for the unemployed are set to expire at the end of the year, which will force many of the unemployed to lose all benefits unless Congress takes action to extend expanded unemployment benefit programs into 2021.

Those on unemployment have already been struggling as more temporary job losses are becoming permanent. Since federal extended unemployment benefits expired on 26 July, the US Labor Department cites benefits have only paid on average 39% of workers’ prior paychecks.

Carlita Redrick lost her job as a hairstylist in Andersen, Indiana when the coronavirus shutdowns began in March, and has been unable to return to work because her son has chronic asthma. A single mother of two, Redrick is currently struggling to survive on just $54 a week in unemployment benefits. She has tried to resolve her low benefits with the state unemployment office to no avail all while working with her two children who are attending school virtually.

“Right now we are barely getting by,” said Redrick. “The kids need winter clothes soon. I hope they pass something soon. It’s been hard.”

Michele Schumer of Pinellas Park, Florida has been unemployed from her job as a server since March. She has only received $125 per week since the expanded unemployment benefits expired. A single mother with a 13-year-old-child, Schumer is currently living in a motel and struggling to make ends meet.

“I lost my home and my car in September. I applied for work everywhere I could. I’m at such a loss,” she said. “I barely scraped some change together this morning just to buy milk and chicken for dinner.”