Victorian Premier Daniel Andrews says he will back a Qantas proposal for states to give at least 24 hours notice before closing borders in an effort to avoid people being locked out of their home state.

The commitment is a minor victory in a push by Qantas and others in the travel and tourism sector to restore Australians’ confidence in travelling interstate, with the fear of being caught on the wrong side of a snap border closure holding back the devastated industry’s pandemic recovery. 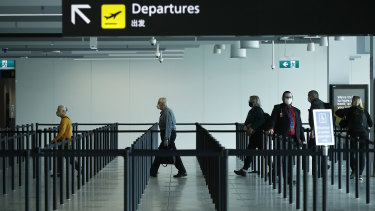 Passengers checking in at a near-empty Melbourne Airport in November. The travel industry says it can’t recovery from COVID-19 without certainty on state borders. Credit:Getty Images

Mr Andrews said on Tuesday he had spoken to Qantas chief executive Alan Joyce about a national framework to govern how to get people home if and when state borders close again.

Thousands of Victorians were stranded in NSW when Victoria shut its northern border on New Year’s Day with only eight hours notice in response to the northern beaches COVID-19 outbreak.

“[Mr Joyce’s] commitment was to put on extra planes in order to get people home. If we gave them 24 hours, rather than a shorter time period, his commitment as a business was that they would put extra flights on,” Mr Andrews said.

“But they can only do the planning for that and commit to that and be accountable for that if they know they’ll get 24 hours notice across the whole country. For our part, I said I’m more than happy to try and do that.” 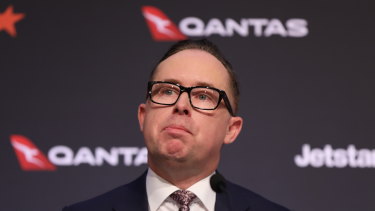 Qantas boss Alan Joyce says there will be no justification for state border closures after April. Credit:Dominic Lorrimer

Mr Andrews said he would back the framework at Friday’s national cabinet meeting, but did not rule out closing Victoria’s border in future if the Chief Health Officer recommended it.

“But to the maximum extent practical, if we can all sign up to that 24-hour notice period, that makes sense to me,” he said at a press conference.

Travel operators and the business lobby had been pushing for a commitment from states to keep borders open permanently once frontline health workers, the elderly and other vulnerable Australians were vaccinated, with Mr Joyce saying last week there was “no reason” why they should close again after April.

While NSW Premier Gladys Berejiklian had pushed for borders to stay open where possible, Victoria, Queensland and WA were quick to shut the door to interstate travellers in response to COVID-19 outbreaks and had not committed to keeping borders open during the vaccine rollout.

West Australian Premier Mark McGowan said on Tuesday he wanted to keep some border restrictions in place beyond COVID-19, citing a drop in drug trafficking during the state of emergency. Mr McGowan said he was exploring the legality of keeping the state’s G2G entry pass system even after the pandemic.

“The bulk of our industry hasn’t returned and won’t really return until people can have faith they can move into another state and not be caught on the hop in a hard lock down,” he said

In early February, the peak industry body’s tourism operation and accommodation members reported forward bookings were down 40 per cent year on year.

Melbourne Airport chief executive Lyell Strambi backed the vaccination of frontline workers and vulnerable Australians as the point to keep borders open and have confidence in tackling future outbreaks with testing and tracing.

“Australians want to travel to see family, do business and holiday, but the community needs greater certainty around borders to have the confidence to book and travel,” he said. “The lack of confidence is impacting thousands of businesses throughout Australia who rely on tourism, conferences and events and ultimately costing the community and the economy.”

At the end of each day, we’ll send you the most important breaking news headlines, evening entertainment ideas and a long read to enjoy.  Sign up to The Sydney Morning Herald’s newsletter here, The Age’s here, Brisbane Times’ here, and WAtoday’s here.