A previous version of this article erroneously contained an image of Melbourne lawyer Martin Amad, who was not the lawyer involved in Mr Gatto's defamation proceedings and was in no way responsible for any error. Mr Amad has a reputation as being a skilled lawyer. The image of Mr Amad and Mr Gatto was erroneously taken from a historical proceeding where Mr Amad represented Mr Gatto in relation to firearm charges. The Age sincerely apologises to Mr Amad for erroneously publishing his image in connection with Mr Gatto's defamation proceeding.

Melbourne underworld figure Mick Gatto is not amused, while his legal team have good reason to be nervous.

The Supreme Court of Victoria has ruled that a defamation trial due to start next week between Mr Gatto and the Australian Broadcasting Corporation will not be heard before a jury, but by a judge alone, after his lawyers bungled the paperwork. 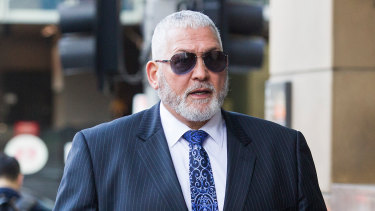 Mick Gatto would prefer that jury hears his defamation case against the ABC.Credit:Paul Jeffers

The former Carlton Crew boss will be the first witness called at the trial on July 22.

Mr Gatto launched legal action in April last year over claims the ABC story had falsely accused him of threatening to kill gangland lawyer turned police informer Nicola Gobbo, according to a statement of claim filed in the Supreme Court of Victoria.

The statement of claim accuses ABC investigative reporters Nino Bucci and Sarah Farnsworth of suggesting that Mr Gatto was a "hitman", "one of Australia's most violent criminals" and "responsible for the murders of Victor Peirce and Frank Benvenuto". 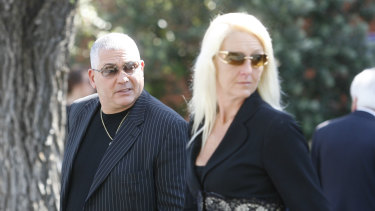 Mick Gatto with Nicola Gobbo photographed at a funeral in 2008.Credit:Angela Wylie

"Mr Gatto has been held up to public ridicule and contempt, and has been seriously injured in his feelings and reputation," it is alleged in court documents.

Melbourne's most persuasive debt collector has already reached a significant financial settlement with the Daily Mail Australia over a similar online story last year, but was keen to have his civil case against the ABC decided by six jurors if it proceeded to trial.

Mr Gatto's faith in the jury system is based on personal experience.

The last time he appeared before 12 of his peers was in 2005, when he was famously acquitted of the shooting murder of reputed underworld hitman Andrew "Benji" Veniamin at a Carlton pizza restaurant.

As he walked free after 15 months on remand, Mr Gatto told a mob of supporters outside the Supreme Court: "Thank God for the jury system, thank God for [his lawyer] Robert Richter, a top barrister."

He would later get Mr Richter's name tattooed on his chest.

While the initial writ filed by Mr Gatto's lawyers on the ABC on April 5, 2019 indicated his preference for trial by judge and jury of six, subsequent correspondence to the ABC's lawyers had erroneously consented to trial by judge alone.

A sworn affidavit by Mr Gatto's solicitor Adam Lopez of Lennon Lawyers concedes that a series of mistakes had been made by himself and his secretary.

"Regrettably, the incorrect reference to a "trial by judge alone" in the various versions of the consent orders was not noticed by either the Plaintiff (Mr Gatto) or his solicitors or his Counsel," Mr Lopez said in the affidavit.

On July 3, Mr Lopez requested the Supreme Court adjourn the trial next week and allow the case to be heard by a judge and jury at a future date. At present, juries have been indefinitely suspended for all Supreme Court civil trials because of the recent spike in COVID-19 infections.

"It is respectfully submitted that the Plaintiff ought not be punished for the unfortunate and regrettable errors of his legal practitioners," Mr Lopez said in the affidavit.

Lawyers for the ABC opposed the application and indicated they were keen to proceed with the trial.

Justice Andrew Keogh dismissed the request by Mr Gatto's legal team for a jury trial, which he said would lead to unreasonable delays.

"The fact that the major issues in dispute will necessarily be determined by the trial judge is a significant consideration,'' Justice Keogh said in his decision.

Mr Gatto, who declined to comment when contacted by The Sunday Age, must now persuade a judge that he has been defamed and that the reporting by the ABC was inaccurate and unfair.

Mr Lopez did not respond to requests for comment.