A Covid app update that would have helped contract tracing teams retrace the steps of those who test positive is believed to have been blocked by Apple and Google for breaching privacy rules.

The software was due to receive an update from April 8, in time for today’s lockdown easing and the introduction of free rapid coronavirus testing for everyone in England.

So far, the NHS app for England and Wales has allowed people to check into indoor places such as bars and restaurants by scanning a QR code, but the data stayed on their phone.

Should a venue be identified as a potential virus hotspot, every device is then sent this data, allowing the app to crosscheck with the owner’s own log of locations and alert them if they might have been exposed.

But the new version of the app planned to automate the process more, instead asking users permission to upload their venue history to a central hub if they test positive.

The Department of Health and Social Care (DHSC) said this would be done in a ‘privacy-protecting’ way and allow venue alerts to be generated more quickly, improving the ability to identify where outbreaks are occurring.

But this goes against the rules set by Apple and Google, which explicitly state that their joint Exposure Notifications System used within the app must ‘not share location data from the user’s device with the Public Health Authority, Apple, or Google’. 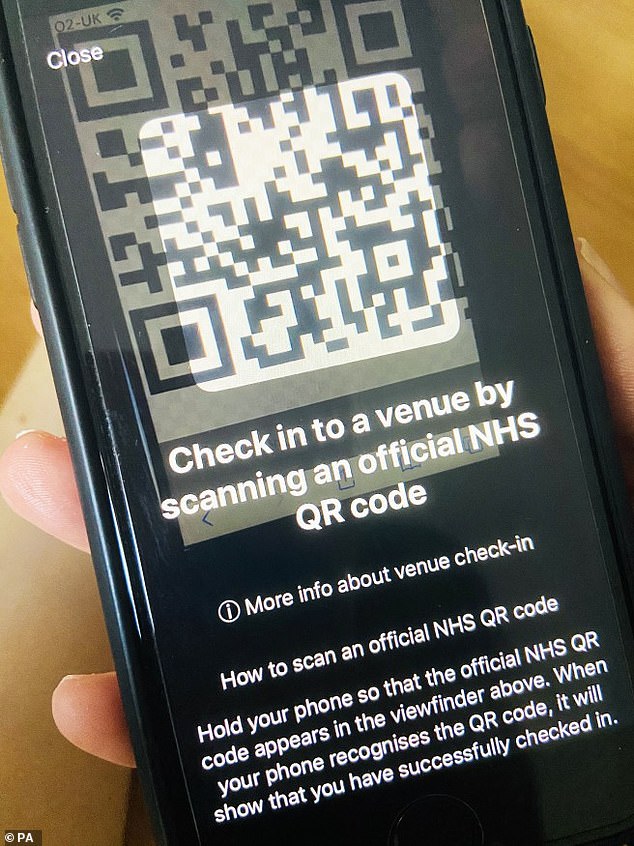 So far, the NHS app for England and Wales has allowed people to check into indoor places such as bars and restaurants by scanning a QR code, but the data stayed on their phone.

The NHS Covid app has looked at adding vaccination status.

Amid calls for No10 to bring in vaccine passports, developers claim to have explored options that would let users upload their vaccination status.

Thousands of pubs, bars and restaurants asked users to check-in with the app during the summer.

Senior ministers have urged Boris Johnson to consider vaccination certificates in order to help breathe life back into the crippled economy.

Downing Street has insisted ministers have ‘no plans’ to use the test and trace app to make people prove they have taken the vaccine.

But a source close to the project told The Times: ‘We would be negligent if we would not look into integration of vaccination data into the app.’

When approached about the matter, DHSC confirmed the update has been delayed but refused to say whether it had been blocked by Apple and Google for breaching their privacy terms.

‘The NHS Covid-19 app is a key tool in our pandemic response,’ a spokesperson said.

‘As venues begin to open up we encourage everyone who can to use the enhanced venue check-in process, which includes advising users to book a test if they attend venues where multiple people have tested positive.

‘The deployment of the functionality of the NHS Covid-19 App to enable users to upload their venue history has been delayed.

‘This does not impact the functionality of the app and we remain in discussions with our partners to provide beneficial updates to the app which protect the public.’

Changes that force every individual within a party to check in using the app or leave their contact details with the venue owner will continue, instead of allowing just one member of the party to check in as before.

Scotland, which runs its own app, appears to have got around the issue by launching a separate check-in app in December, leaving the original Protect Scotland app to focus on detecting other positive users that individuals come into close contact with.