Commentator Peta Credlin’s performances at Daniel Andrews’ daily coronavirus press conferences are a mixture of overt political partisanship interlaced with some good journalism. For people concerned about journalistic ethics, it is an unsettling combination. 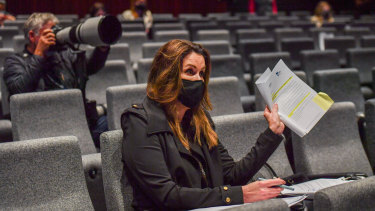 Credlin is a political operative, first and foremost. Formerly chief of staff to the Liberal ex-prime minister Tony Abbott, she is now part of the shrill chorus of right-wing pundits who appear after dark on Rupert Murdoch’s Sky News pay television channel.

The night-time line-up on Sky doesn’t make the slightest pretence at practising journalism. It is a provincial imitation of Murdoch’s Fox News in the US, devoted to promoting extreme, anti-scientific and often offensive views that reflect a reactionary ideology.

None of this makes Credlin ineligible to attend press conferences, however.

The question here is not whether she is a journalist. Clearly she is not. She is an ideological warrior and celebrity pundit. The question is whether what she does at these coronavirus press conferences is journalism.

That is a more complex question.

Sometimes at these press conferences she is the ideological warrior.

An example was a question about an announcement Credlin said Andrews had made on March 27 about hotel quarantine security being placed in the hands of private security firms.

Andrews replied that her facts were wrong, and went on to raise a question about her motives. He was not going to stand there, he said, and have false statements put to him so often that they might be made true by repetition.

This was a political response by Andrews provoked by what was clearly a politically motivated intervention on Credlin’s part.

Overt political partisanship breaks one of the promises that news journalism makes to society: that it is a method for seeking accurate information which, in news coverage, will be gathered and presented impartially.

However, Credlin is also capable of doing good journalism. She comes to the conferences equipped with background information, evidently acquired from thorough preparatory reading and a knowledge of public policy processes, and asks probing questions.

A good example was her questioning of Andrews about the provision of telephone records to the hotel quarantine inquiry. She asked a specific and important question about records of inbound telephone calls to the former chief commissioner of police, Graham Ashton.

Andrews replied that if the inquiry asked for these records, they would be provided.

Within a short period of time, the inquiry had indeed asked for them, and the secretary of the Department of Premier and Cabinet, Chris Eccles, had resigned, saying his records showed he had made a call to Ashton which he could not recall having made when he gave evidence to the inquiry.

Whether Credlin’s questioning had anything to do with this sequence of events is beside the point. What it showed was that she had a keen appreciation of a very important issue that had not otherwise been brought to light.

However, a problem also arises from the way Credlin deals with the inquiry in her Sky News segment.

For this purpose she has on occasion recruited some of the more outlandish screamers from Sky at night – Rowan Dean, Mark Latham, Alan Jones – and used them to generate a series of attacks of Andrews in highly partisan terms.

These have nothing whatever to do with journalism. They are just partisan tirades. The news content Credlin has elicited at the press conference, which surely deserves to be treated according to accepted standards of journalistic ethics, is instead used to fuel these attacks.

For at least the past 70 years, it has been an axiom of professional journalism that news reporting and commentary should be kept separate. In well-run newsrooms, this is still observed.

It is true that the line between the two never quite achieves what William Blake called “the hard and wiry line of rectitude”, but in good newsrooms it is clear enough for audiences to be able to distinguish news reportage from commentary.

This is another promise journalism makes to society.

Credlin’s presence at the Andrews press conference must be tolerated in the interests of a free press, but it changes the dynamics of those occasions by introducing a politically inspired combativeness that is otherwise absent.

And any journalistic good it does is tainted by the breaking of those professional promises and by its association with Sky at night, the antithesis of what journalism is about.

Denis Muller is a Senior Research Fellow in the Centre for Advancing Journalism at the University of Melbourne and a one-time associate editor of The Age.