London: The federal government has accused Europe of “arguing semantics” over vaccine exports and criticised Brussels for not responding to an urgent request for 1 million doses to be diverted to coronavirus-ravaged Papua New Guinea.

Canberra is locked in a rolling dispute with the European Commission over the fate of millions of doses which should have been shipped to Australia for the early stages of its vaccination rollout. 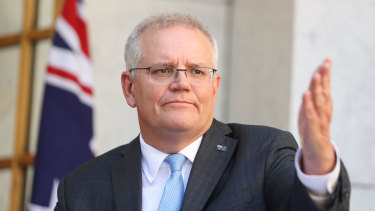 In a new statement released on Wednesday morning, a federal government spokesman said the European Commission had made it clear that further deliveries would never be approved.

“AstraZeneca has not been able to secure an export licence from Europe to send the remaining doses, and they know they would never be approved by the European Commission,” the spokesman said.

“The European Commission itself has confirmed their export control regime has blocked the export of a number of those doses, including a shipment of 250,000 doses, and they also requested we withdraw other export permit applications.” 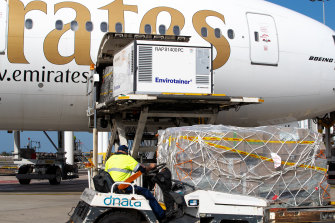 Some 300,000 doses of the Oxford-AstraZeneca vaccine arrive at Sydney International airport on February 28.Credit:Getty Images

This is the first time the Morrison government has publicly claimed that Europe asked for export approvals to be withdrawn.

The spokesman also rejected an overnight statement from the European Commission which noted it had only formally blocked 250,000 doses bound for Australia.

“The European Commission is arguing semantics but at the end of the day, all we want is what Australians have ordered so we can get more vaccines in arms,” the government spokesman said.

The Morrison government is also angry with the European Commission for not replying to a request to ship lifesaving vaccines to PNG to help ease a rapidly worsening outbreak.

Warning the PNG outbreak could morph into a health crisis for the region, Morrison last month asked European leaders to redirect one million of Australia’s 3.1 million un-supplied doses to PNG.

European Commission President Ursula von der Leyen is yet to send a reply to Morrison’s written plea nearly three weeks after it was sent.

Australian officials have been lobbying their EU counterparts to have the 1 million doses released to PNG but are pessimistic about their chances.

The European Commission is understood to have questioned why Australia would want Europe to send AstraZeneca vaccines to PNG when Australia has domestic production capacity at a factory in Melbourne.

Australia has given PNG 8000 doses for frontline health workers but sending more doses could be politically difficult given Canberra’s rollout is already behind schedule.

“If Europe is unable or unwilling to provide to Papua New Guinea 1 million of the vaccine doses contracted to Australia, they should be up front and declare so now,” he said.

“It’s been more than two weeks and we are yet to receive a response, and given the speed and scale of the outbreak in PNG, time is of the essence.”

The EU’s own rules state that shipments bound for low and middle-income countries like PNG should not be blocked.

However AstraZeneca may not even have enough doses to send to Australia as first promised given it is having trouble ramping up production. The company had planned to supply 180 million doses to the EU in the second quarter but will only deliver 40 million in that time.