AstraZeneca Covid vaccine: Everything you need to know amid blood clot fears

THE VACCINE programme in the UK has changed course once more due to blood clot fears.

Officials said those under 40 will be offered an alternative to the Oxford/AstraZeneca Covid-19 vaccine which has been linked with rare blood clotting events. 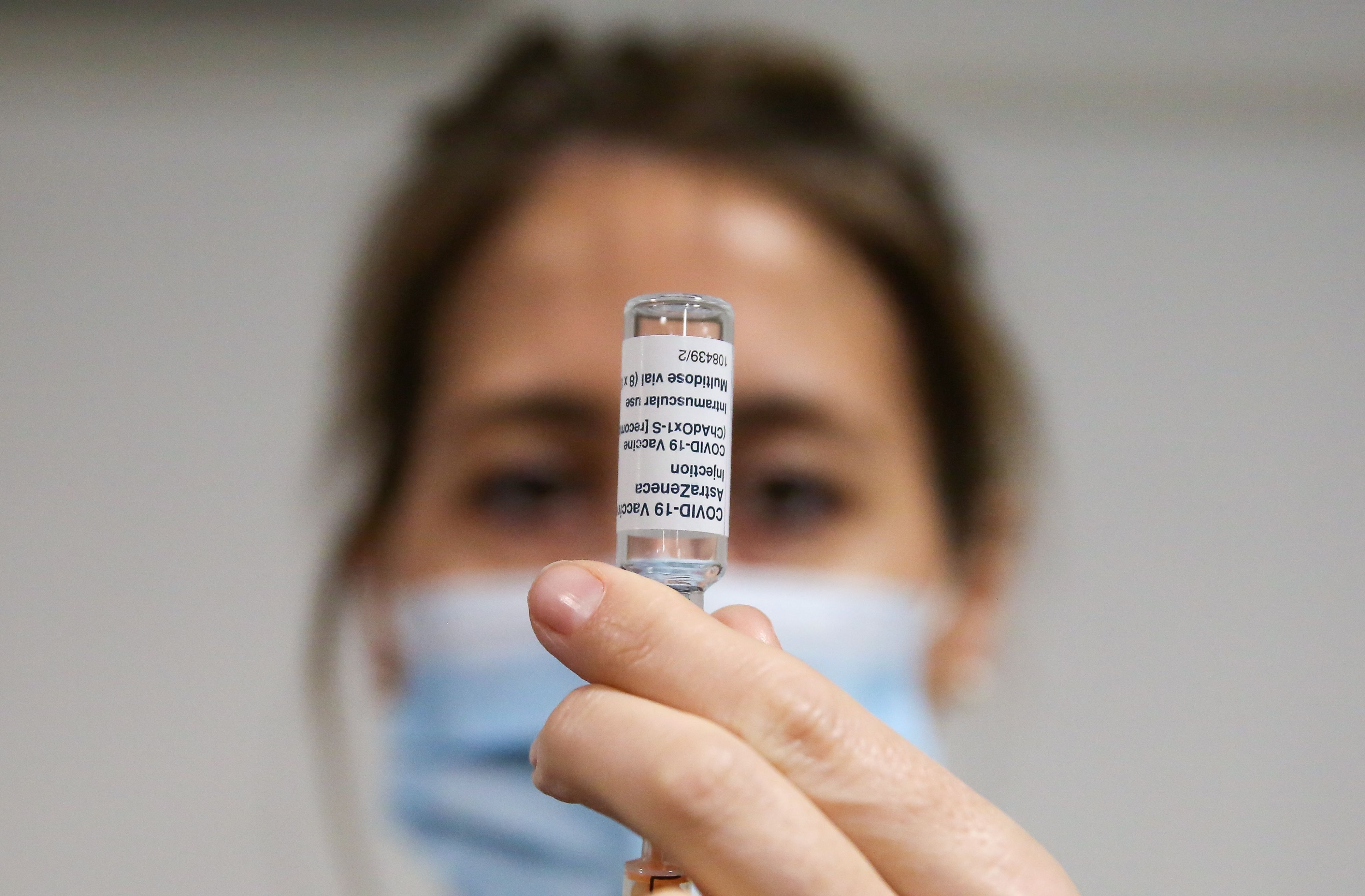 Unusual blood clots appear to affect younger people more often, although have been seen in people aged between 18 and 93.

Despite the change in guidance today, the JCVI, which advises the government on vaccine use, says there are no fresh safety concerns.

The UK medicine regulator the MRHA has also said the benefits of the vaccine continue to outweigh any risks for the vast majority of people.

But MHRA chief executive Dr June Raine said: “The balance of benefits and risks is very favourable for older people but is more finely balanced for younger people and we advise that this evolving evidence should be taken into account when considering the use of the vaccine, as JCVI has done.”

Here is everything you need to know:

What blood clots have been found and how many?

The MHRA have been looking at blood clots in major veins that unusually occur with low blood platelets (called thrombocytopenia).

As of April 28, there have been 242 cases. The MHRA gives a weekly update on figures here.

The cases are out of 28.5 million first and second doses of the AstraZeneca vaccine, making it extremely rare.

The MHRA said the overall incidence of blood clots with low platelets after a first dose is put at 10.5 per million doses, and about one in a million for a second dose.

There have been 49 deaths, meaning the odds of someone getting a fatal blood clot is 2.1 per million.

The same kind of blood clotting cases have been seen in Europe.

And there are cases in the US after having the Johnson & Johnson vaccine – which uses the same technology as the AZ jab but is not being used in Europe or the UK.

What are the signs to look out for?

The MHRA has outlined the symptoms associated with the rare blood clotting events.

These signs should be watched for at any point from around four days to four weeks after vaccination.

And anyone experiencing them should seek prompt medical attention.

Does the AstraZeneca Covid vaccine cause blood clots?

After intense scientific work, the link between the AZ vaccine and blood clots has gotten stronger, but is still not conclusive.

Therefore precautionary measures have been taken while investigations carry on.

The MHRA weekly summary of vaccine side effects says: “On the basis of this ongoing scientific review, it has been concluded that the evidence of a link with COVID-19 Vaccine AstraZeneca is stronger, but more work is still needed.” 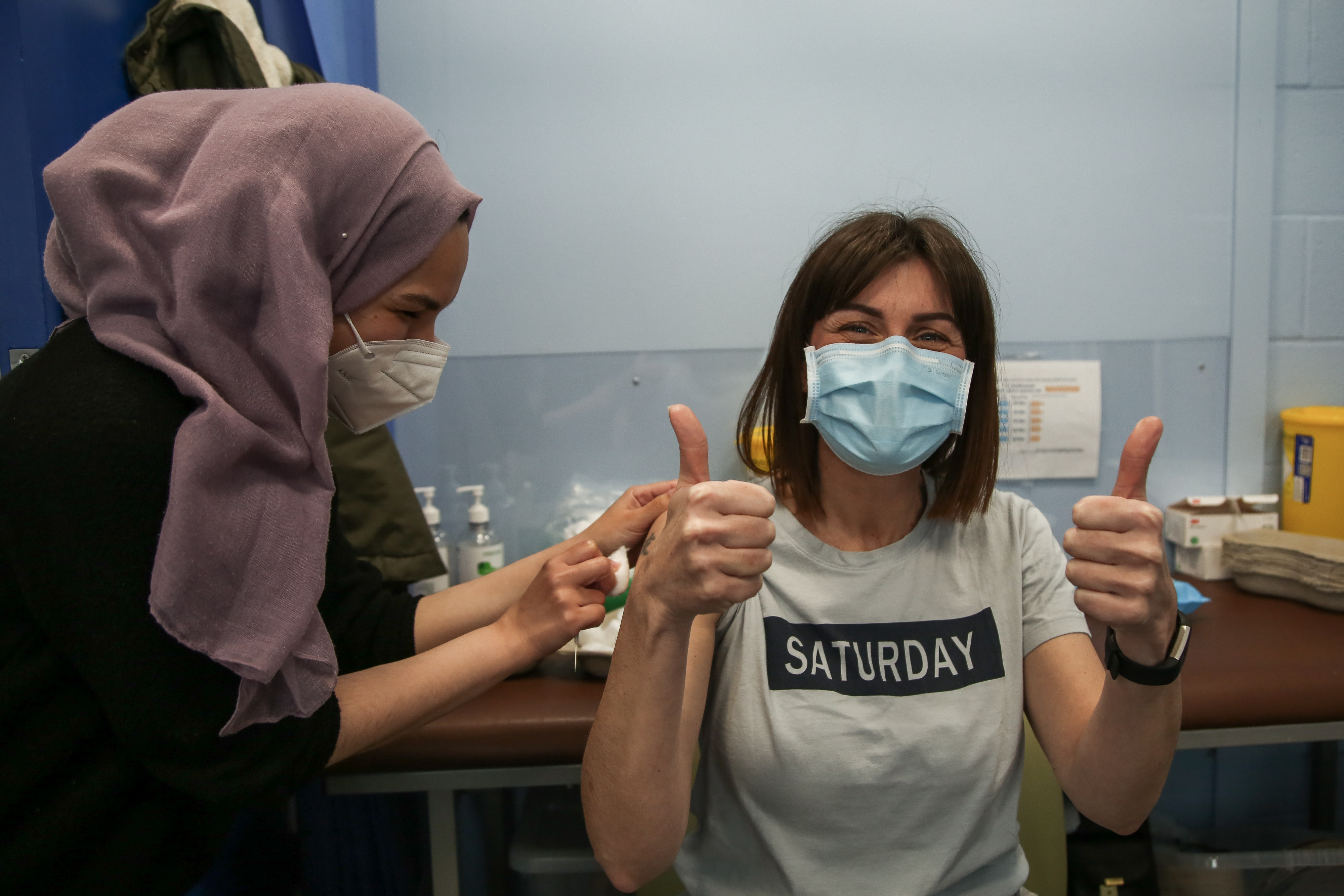 European regulators have been more concrete in their findings.

Speaking at the EMA briefing on April 7, Dr Sabine Straus, EMA safety committee chairwoman, said: “Our conclusion is that these clotting disorders are very rare side effects of the vaccine."

The “unusual” blood clotting should be listed as a “possible side effect of the vaccine”, the EMA's safety committee decided.

How does the jab cause blood clots?

Experts said it seems that an immune response to the vaccine could explain the blood clotting events.

Dr Sue Pavord, Chair of the Expert Haematology Group, said experts have only been able to investigate the cases over around six weeks.

But she added: “The condition is an immune reaction to the vaccine which triggers the production of platelet factor 4 antibodies that can cause intense activation of the blood clotting system, causing formation of blood clots in veins and arteries, and most commonly the venous channels draining blood from the brain.

“The presentations can be dramatic and the mortality rate of those developing this condition is currently 19 per cent.

“The EHP is working daily to support clinicians treating these cases and to review the most effective management strategies.”

Sir Munir Pirmohamed, chairman of the Committee on Human Medicines, said at the MHRA briefing: “The early evidence suggests that this constellation of symptoms is caused by an immune response against platelets which allows the platelets to then lead to clotting in different parts of the body.

“But what we don’t have clearly is the link between the vaccine and how the immune response becomes activated against the platelets.”

Experts say the blood clotting is similar to a condition suffered by patients treated with a blood-thinning medicine.

Scientists who studied cases in Europe said the shot may cause the body to activate its own platelets – blood cells which form clots to stop bleeding.

Who is at risk?

Young people are more likely to have had a rare blood clot after the AZ jab, but the MHRA has not revealed how many cases have occurred in each age bracket.

It says the average age of a brain blood clot was 47 and of any other clot in a major vein was 55.

She told the briefing: “It’s something that we at the MHRA are monitoring very carefully indeed. 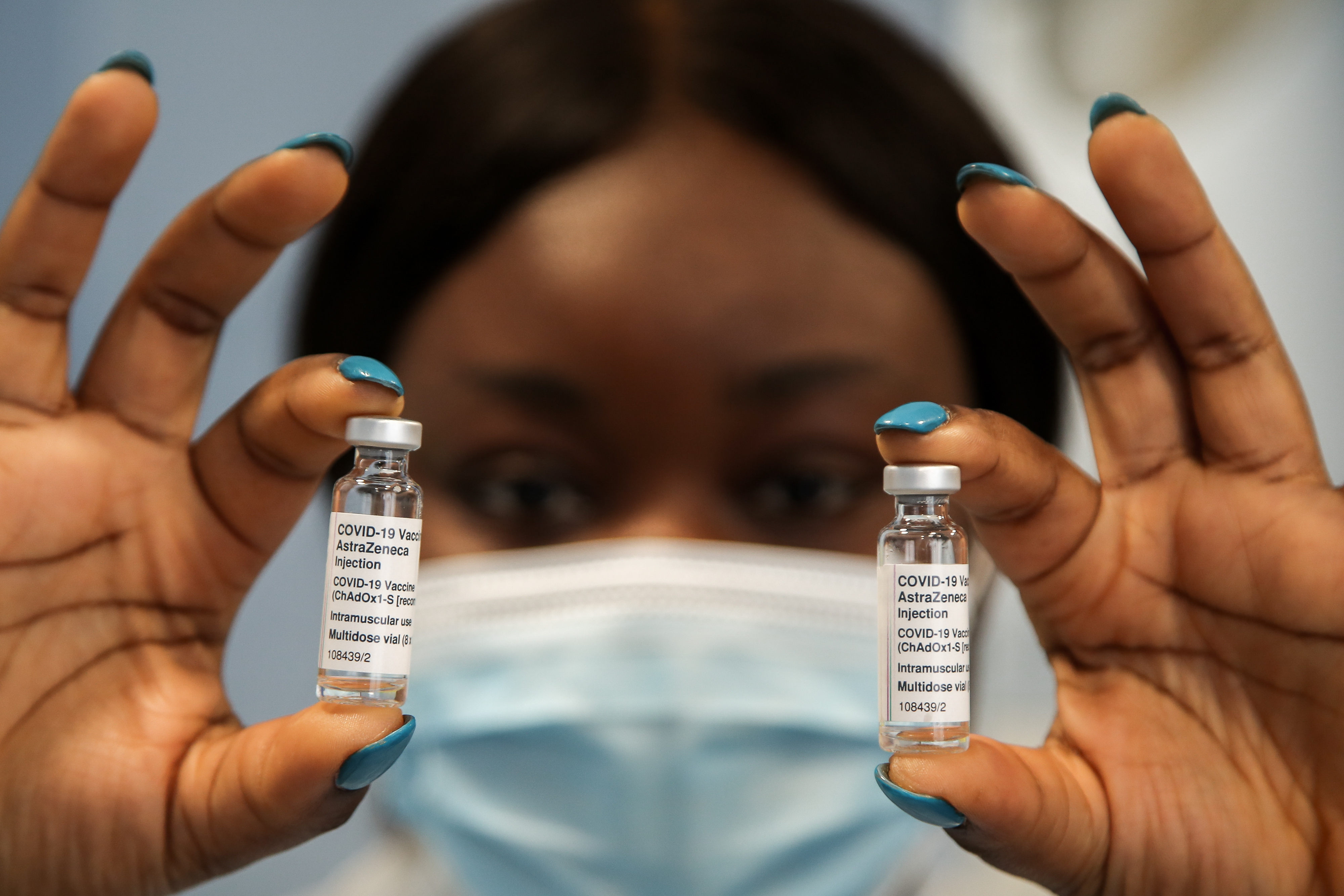 “As you probably recall, we initially thought that an apparent difference… was due to the way that the vaccine was deployed.

“But we now know there is a very small difference emerging, and that is something we’re looking into very carefully indeed so that the appropriate advice can be given.

“But there are two key points there – one is that these are extremely rare, and (the other is) that any difference we’re looking at now is a small difference and one that we need to thoroughly investigate.”

Previously experts have said that despite women presenting more in absolute figures, this does not mean they are more at risk.

Dr Pavord said: “Some of the most dramatic presentations have been in young women and hence the JCVI’s previous recommendation to offer alternative vaccines to men and women under 30 years old.”

Should we be worried?

Prof Van-Tam previously used a nautical analogy to describe the “course correction” in the vaccination programme.

He said it was “quite normal” and “business as usual” for medics to alter their preferences on how to treat patients.

“This is a massive beast that we are driving along at enormous pace with enormous success, this vaccine programme,” he said. 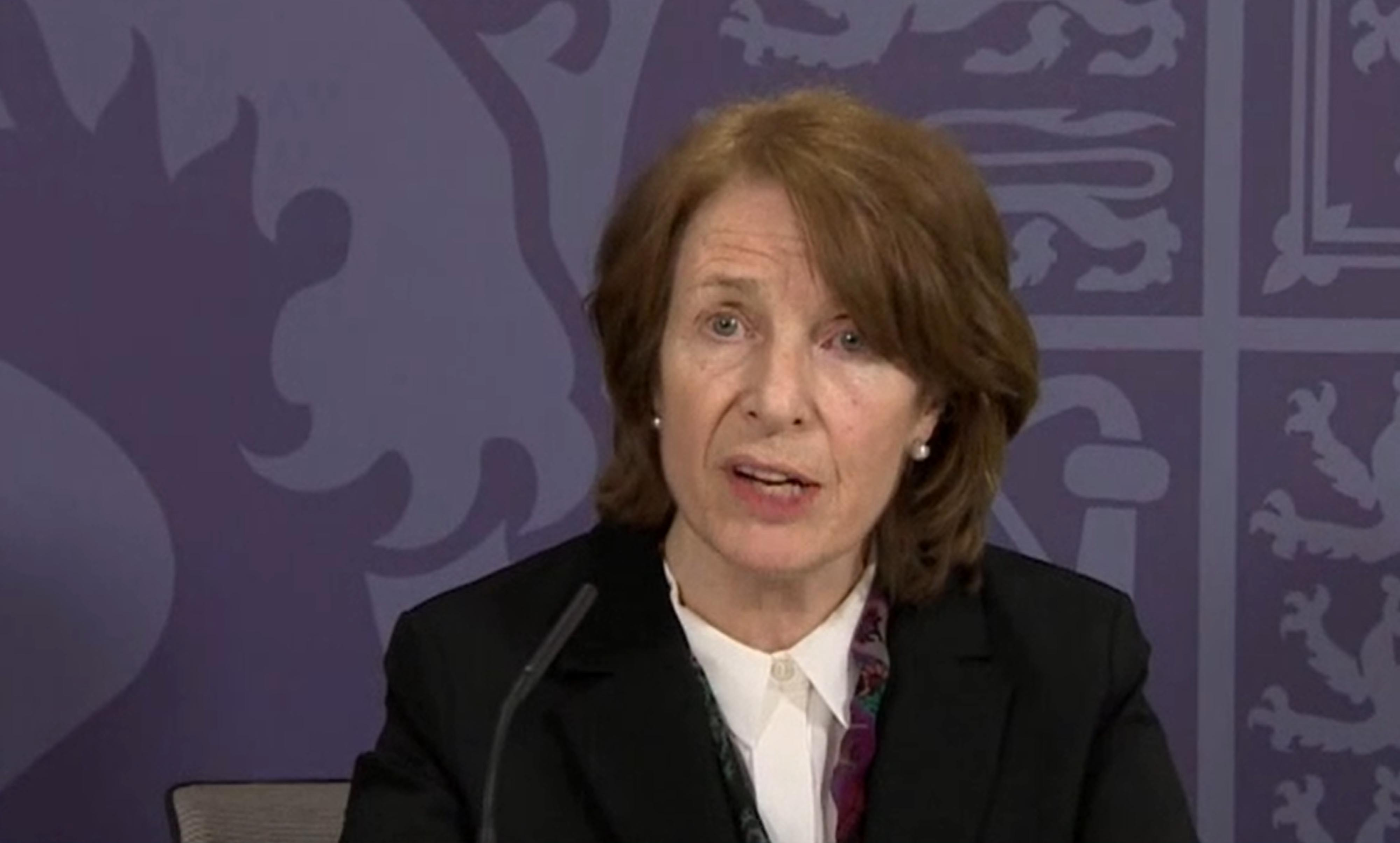 “If you sail a massive liner across the Atlantic then it’s not really reasonable that you aren’t going to have to make at least one course correction during that voyage.”

One official compared the risk of blood clots after the AZ vaccine to the contraceptive pill – which has been used for decades.

Dr Peter Arlett, head of data analytics at the European Medicines Agency (EMA), told a Brussels briefing: “If we treat 10,000 women with a combined hormonal contraceptive for a year, we will see four excess blood clots in that year.

“So that just gives a benchmark of another medicine given to a healthy population which causes a side effect which occurs rarely but that we need to take into consideration.”

Various studies have put into context the risk of getting a blood clot after catching Covid, which is up to ten times higher.

Should I get my second dose?

Health experts have said those who have had a first dose of AstraZeneca and not suffered a clot should have a second dose of the same jab, irrespective of their age.

Prof Jonathan Ball, molecular virology, University of Nottingham, said: "Serious adverse effects have mainly been reported after receiving the first dose of the AZ vaccine, so if you have already had your first dose then it’s important that you still have your second dose to get good levels of immunity.”

A government spokesperson said: “Everybody who has already had a first dose of the Oxford/AstraZeneca vaccine should receive a second dose of the same jab, irrespective of age, except for the very small number of people who experienced blood clots with low platelet counts following their first vaccination.

“When people are called forward, they should get their jab. Vaccines are the best way out of this pandemic and provide strong protection against Covid-19.”

There are a variety of things that can cause deep vein thrombosis (DVT) – when you get a blood clot (a sticky mass of blood cells) in a vein that is deep below the skin.