NSW’s Deputy Premier and others to isolate until next month

NSW Deputy Premier John Barilaro was on the Today show a short while ago.

He is isolating in Sydney and confirmed he has tested negative after learning he was a close contact of state agriculture minister Adam Marshall. Mr Barilaro says he will stay in isolation until Tuesday, July 6 and many of his colleagues are “in exactly the same boat”. 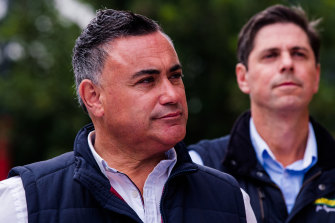 “What I’ve heard is about 90 tests at the parliament yesterday, no positive cases,” the NSW Deputy Premier said.

“So that’s good news at this stage. But, you know, with this variant, it’s possible you could have a positive test on your second or third attempt. I’ll get retested on the 29th [of this month] and then retested on July 4.”

NSW politicians and their employees were thrown into a spin yesterday after Mr Marshall revealed he had tested positive. NSW Health Minister Brad Hazzard was among those isolating.

Mr Barilaro said it was lucky politicians were isolating before they returned home to their respective electorates for the winter break.

“Of course we have plenty of test sites and we have our hospital system in place in the regions but [this virus] is one that we don’t want in rural and regional NSW,” he said.

“Yesterday there were a number of regional MPs, National Party MPs, that were meant to be travelling back home. I made it clear yesterday that no one is to travel home until we get advice from [NSW] Health.” 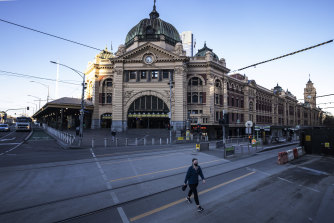 Melbourne’s Flinders Street Station has been listed as a potential exposure site.Credit:Getty

The trains the COVID-positive patient took between all three stations are considered tier 2 sites, meaning people who were on the same service at the same time should get tested urgently and isolate until they receive a negative result.

A number of shops have also been added to the list of exposure sites, including a Woolworths in Burwood East, in Melbourne’s eastern suburbs, and a shopping centre, fruit shop and Asian grocery in Forest Hill (also in Melbourne’s east).

This morning’s headlines at a glance

What a week it’s been. Let’s jump straight into what you need to know.