Bee keepers are warning that a trademark stoush over the right to use the word “manuka” could set a damaging precedent if a New Zealand tribunal bans Australian producers from marketing their products under that term. 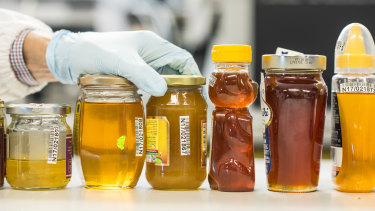 The New Zealand government is attempting to prevent Australian beekeepers from marketing their products as “manuka”.Credit:Wolter Peeters

The New Zealand government has thrown its weight behind the bid with a $5.7 million grant to the MHAS, with $1.4 million going directly to the legal dispute.

“The project is to ensure that the term ‘manuka honey’ is protected around the world for all NZer, as a term representing manuka honey from New Zealand,” the government said in its description of the project. “The location is where manuka honey is produced, extracted, packed or sold.”

The Intellectual Property Office of New Zealand ruled in 2018 that the MHAS could apply for the certification trademark because “the fact that honey is labelled as honey from the nectar of a well-known native tree, which is identified by a Maori name, is capable of indicating that the honey has a particular geographical origin”.

The MHAS is arguing that the word “manuka” is the cultural property of the Maori and the Australian industry is misappropriating it.

Australia Manuka Honey Association chairman Paul Callander said that if successful, the trademark would set the local industry back a decade and cause significant job losses in the sector. Already the industry had noticed an increase in the shelf price of Australian-made manuka products, which he attributed to jitters in the retail sector.

“It is pretty much unheard of for a sovereign government to financially support a private trademark action as New Zealand is doing in the case of manuka honey,” Mr Callander said. “This essentially removes the dispute from the private realm to the public, and we believe in those circumstances it is critical for the Australian government to also become involved.”

“It’s not about the Maori, it’s about financial gain.”

Tom Walters, a Maori tribal leader who sits on the board of the Australian Manuka Honey Association, said the word “manuka” was only a Maori word when it had a macron over the first “a”, and that any suggestion to the contrary was an attempt to confuse the issue. He wants to see more collaboration between the New Zealand and Australian manuka honey producers and stop adulterated products entering the marketplace.

Manuka honey is produced from the nectar of Leptospermum scoparium, which is indigenous to Australia and New Zealand and has become valuable due to its purported medicinal qualities. The term “manuka” has been used in Australia since the late 19th century.

It is used in medicine for wound and burn dressings, but studies are less conclusive about whether it has health benefits when taken orally.

The application is due to be considered in August.