Australians urged to ditch rubbish habits picked up in lockdown

Australians' love of home-delivered food and online shopping during COVID-19 lockdowns has generated an alarming 20 per cent increase in household rubbish, placing extra pressure on a sector already struggling to adapt to Chinese import bans on waste.

Accompanying the rise in household garbage was a 100-fold increase in medical waste – overwhelmingly personal protective equipment – in the Victorian aged care sector. 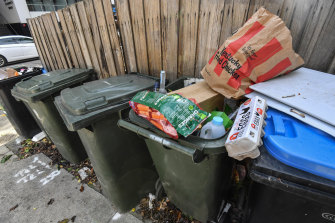 An Infrastructure Australia report released on Wednesday has mapped the impacts of the pandemic on the country's infrastructure sectors, showing the nation has managed the crisis well and demonstrated a resilience beyond many other Organisation for Economic Co-operation and Development nations.

This, Infrastructure Australia said, was because infrastructure services and networks were able to reconfigure quickly and deliver services in different ways.

While some behavioural shifts adopted during lockdown have been positive – including the renaissance of regional areas, increased flexibility and resilience in working habits, and a growth in digital innovation – the report's authors have urged state and federal governments to prioritise problematic habits Australians adopted in 2020.

The crisis in waste was made worse by an increase in the use of personal protective gear and people "contaminating" their recyclables with rubbish, said Peter Colacino, Infrastructure Australia's chief of policy and research. 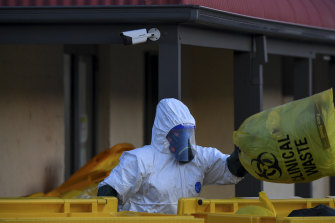 "While we're generally a pretty compliant bunch – you know, we've all been happy to wear masks and stay at home etc – we're actually not great at sorting our waste.

"So we've got this issue with more waste being created at home, and that waste being a low-quality waste stream, and the cost or the value of recycled materials is decreasing during COVID, and all of that creates a really difficult set of policy environments for waste policy generally."

Another challenge is a renewed reliance on cars, as commuters concerned about infection risks shun public transport.

About one-third of surveyed Victorians told researchers they intended to use their cars more in future, while second-hand car registrations in NSW grew by about 35 per cent above baseline levels. 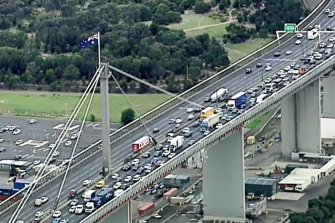 Melburnians poured out of the city as restrictions were eased in November.Credit:Nine News

"We think it's really important that the continued investment in transport infrastructure occurs," Mr Colacino said. "I think everyone appreciates we've seen infrastructure be a big focus of government stimulus action. And that's something that we think is appropriate and right."

He said this must be matched by a strong focus on encouraging public transport use, and active forms of transport such as cycling and walking.

"People are likely to return to work in their car, even if they take that journey less frequently. And what we've seen already is road congestion above pre-COVID levels."

However, amid growing scepticism about using public transport, Melburnians enthusiastically took to cycling, with the city recording a 270 per cent increase in the number of riders on bike paths between November 2019 and April 2020.

During lockdown 12 per cent of Victorians who responded to the survey moved home – mostly from urban areas to country and regional centres – the report found, placing greater burdens on the infrastructure capabilities of country towns and regional centres.

"This caused an immediate increase in capital city rental vacancies, while demand increased in regional and coastal towns," she said.

"The longevity of these changes is uncertain. However, the impacts are likely to persist for some time as Australians continue to seek more affordable housing outside of the inner-metro areas. If this trend continues, we could see reduced demand for urban transport and increased pressure on
broadband networks in regional centres."

The research showed that Australia has become more local and decentralised in response to pressures presented by the pandemic, with commercial energy consumption down and household consumption up.

"We estimate that around 4 million employees have been working from home since March 2020,
representing 30 per cent of the total workforce, with a third of those workers wishing to remain remote," Ms Madew said.

"This accelerated trend has led to widespread office vacancies, greater strain on the broadband
network, greater energy and water consumption in residential areas and increased local activity,
including local traffic congestion and demand for green space."

A spokeswoman for the Victorian government said: "While the pandemic has had some short-term impact on population movement to the regions, at this stage there's not expected to be any major changes to long-term projections for Victoria.

"We’re providing $7.5 million to support councils in their strategic planning, so our regional and rural towns maintain their character but are also well prepared for growth."