Frustrated shoppers blamed aliens after their car key fobs stopped working outside a Tesco in Hertfordshire.

Police say they received around 100 reports in three days from people using the supermarket in Royston, Hampshire.

The drivers were locked out of their cars with communications watchdog Ofcom now investigating.

Hertfordshire Police admitted they didn’t know the cause of the issues, though they added it ‘was not being treated as malicious intent’.

Frustrated shoppers took to social media to speculate about the cause of the problem, with one woman joking about aliens and another about ‘there being a full moon tonight’.

There were around 100 reports of key fob issues in three days from people using the Tesco supermarket car park in Royston, Hampshire

One person wrote: ‘I thought it was some kind of alien phenomena. My fob wouldn’t work – some lady couldn’t stop her alarm going off and there was at least 3 other car alarms going off.’

Police also urged people ‘not to panic’ if they could not access their cars at the site and said to report difficulties to the supermarket.

In a Facebook post, police said: ‘We have received a number of calls from members of the public who have not been able to access their vehicles in the car park of Tesco in Old North Road, Royston.

‘For reasons yet unknown, there appears to be an issue in this area with key fobs not functioning correctly.

This afternoon, PC Taranvir Gill has attended the Tesco branch with Ofcom, who are the UK’s communications regulator and conducted a survey.

An investigation is now underway, led by Ofcom with the support of PC Gill, with the manager of Tesco aware of the ongoing work. 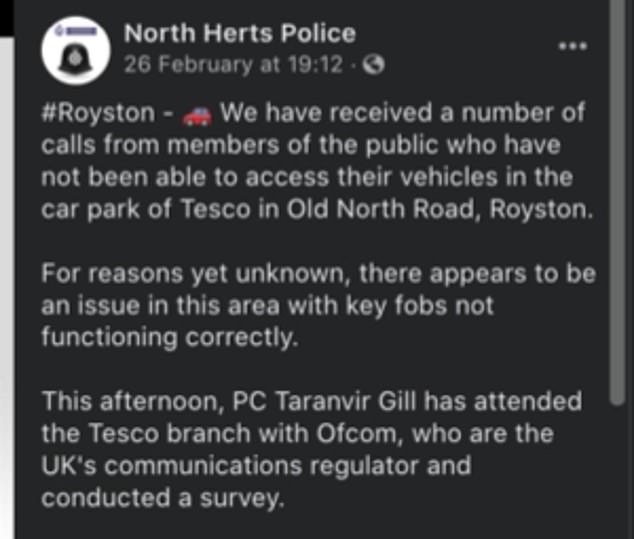 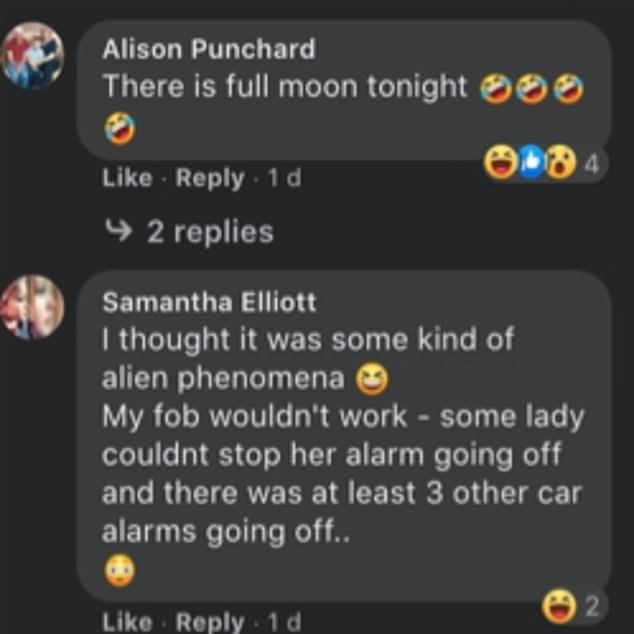 PC Gill said, ‘We wish to reassure residents that we are fully aware of the issues affecting intermittent access to vehicles in this car park.

‘If you have any problems accessing your vehicle, please do not panic. We would ask that in the first instance, you go to the Tesco customer service desk and ask to speak to the on-duty manager to make them aware you are having difficulties getting into your vehicle as they are aware of the process to follow.

‘They have the contact details for Ofcom, who are fully up-to-speed with this issue. The Ofcom reference number is 1138558.

‘In the meantime, if you have any questions or concerns about this, please feel free to email me at [email protected]’