Beatrice poses with new husband Edoardo and grandparents after wedding

Smiling with pride, the Queen and Prince Philip may have been required to keep their distance from newlyweds Princess Beatrice and Edoardo Mapelli Mozzi – but a Royal relationship has rarely been closer.

Beatrice married on Friday wearing both a tiara and vintage dress generously lent to her by her grandmother, deeply conscious that the 31-year-old was missing out on a traditional large wedding.

Instead, the hastily arranged ceremony was attended only by close friends and family following the cancellation of a larger wedding in May due to lockdown.

The princess was adamant her beloved grandparents should have the opportunity to see her exchange her vows with Edo, 37 – Government guidelines permitting – so chose the Chapel of All Saints on the Windsor estate, where the Queen, 94, often attends services.

It was the first Royal wedding behind closed doors for 235 years and the first ‘public’ engagement for the Duke of Edinburgh in a year. The 99-year-old last appeared at Lady Gabriella Windsor’s wedding last May. 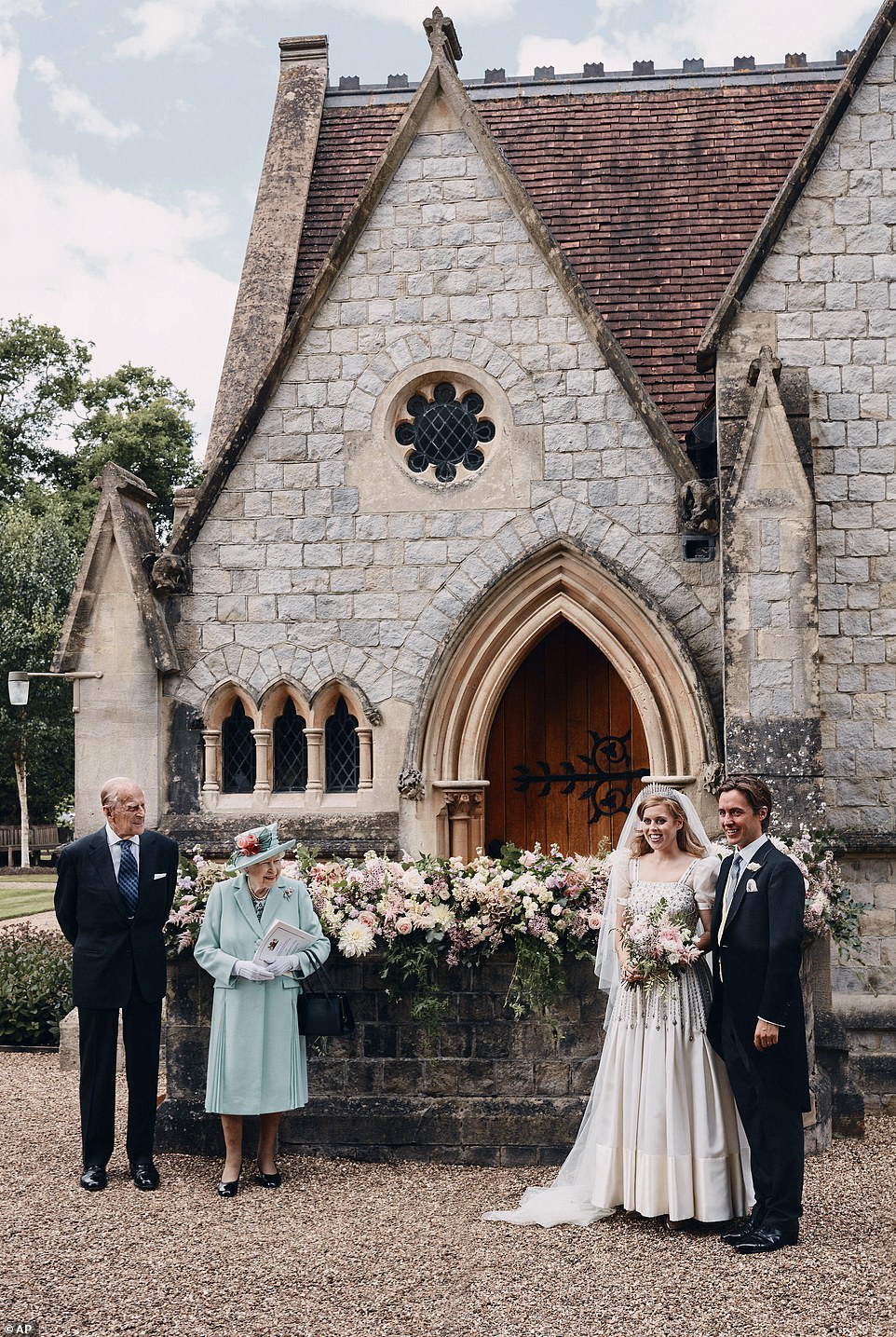 Queen Elizabeth II and Prince Philip stand alongside Princess Beatrice and Edoardo Mapelli Mozzi outside The Royal Chapel of All Saints at Royal Lodge, Windsor, after their wedding on July 18, 2020 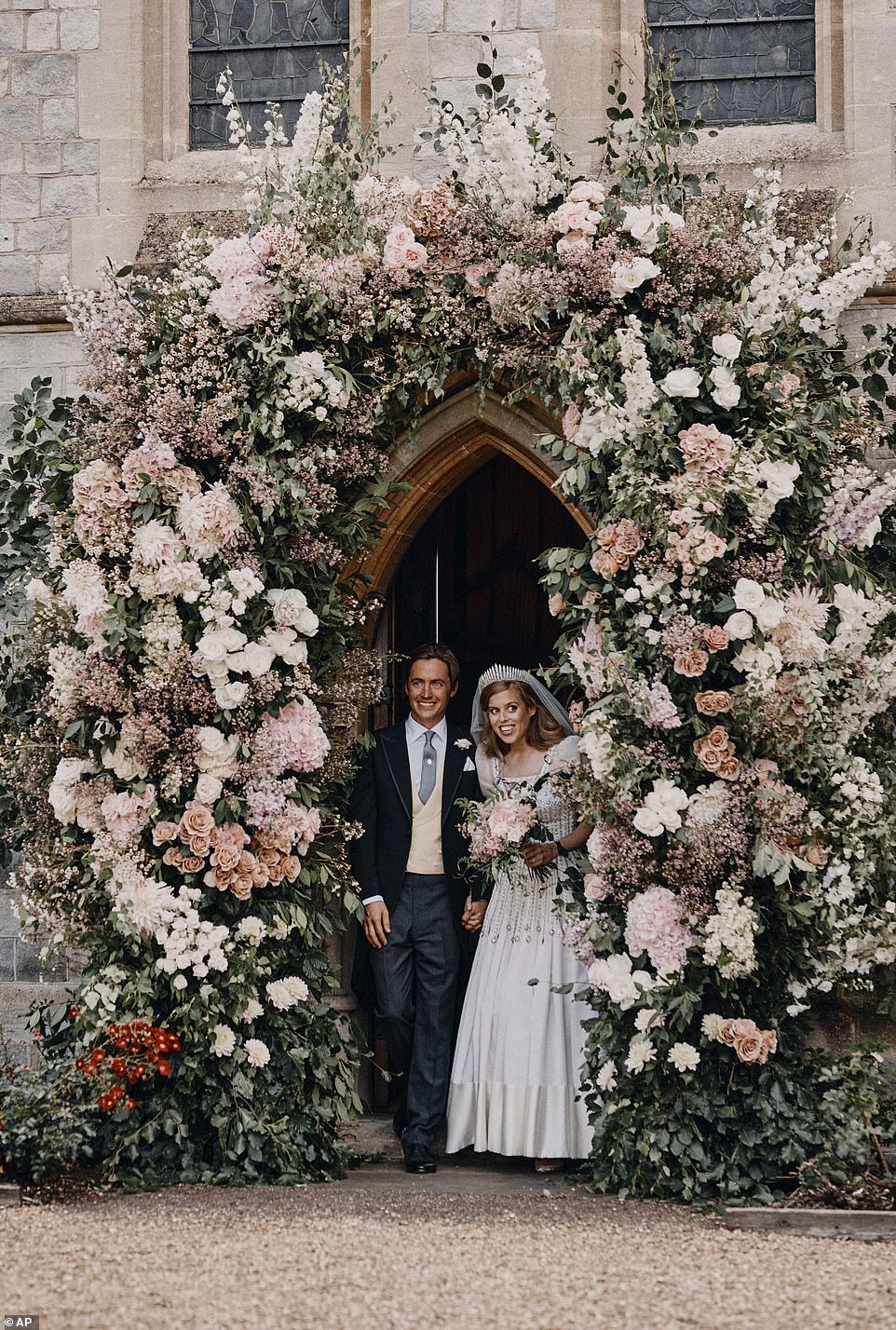 Princess Beatrice and Edoardo Mapelli Mozzi stand in the doorway of The Royal Chapel of All Saints at Royal Lodge, Windsor, after their wedding on July 18, 2020

The wedding bridged three Royal generations – with Princess Beatrice becoming a stepmother to Edo’s son Wolfie, four, who acted as both best man and page boy alongside his two young cousins. Beatrice’s sister Eugenie, 30, was maid of honour.

A small party was held afterwards at Royal Lodge, Prince Andrew and Sarah, Duchess of York’s Windsor home, with many of the 20 guests staying overnight – some in glamping pods outdoors.

The photographs were released yesterday to ensure that they did not overshadow the ceremony on Friday to confer a knighthood on Captain Tom Moore, the former Army officer who raised £33 million for charity in a sponsored walk leading up to his 100th birthday in April.

The Queen lent Princess Beatrice the tiara that she wore at her own wedding and a vintage gown first worn to a glitzy film premiere almost 60 years ago.

In an astonishing double display of generosity, unmatched for any previous Royal bride, the monarch made every effort to ensure that her granddaughter’s wedding to Edoardo Mapelli Mozzi was an occasion for the couple to remember.

It was an acknowledgement not only that lockdown had denied Beatrice the wedding-day fanfare enjoyed by her sister Eugenie and cousins William and Harry, but also of the distress of seeing her father’s reputation wrecked by his links to paedophile Jeffrey Epstein. 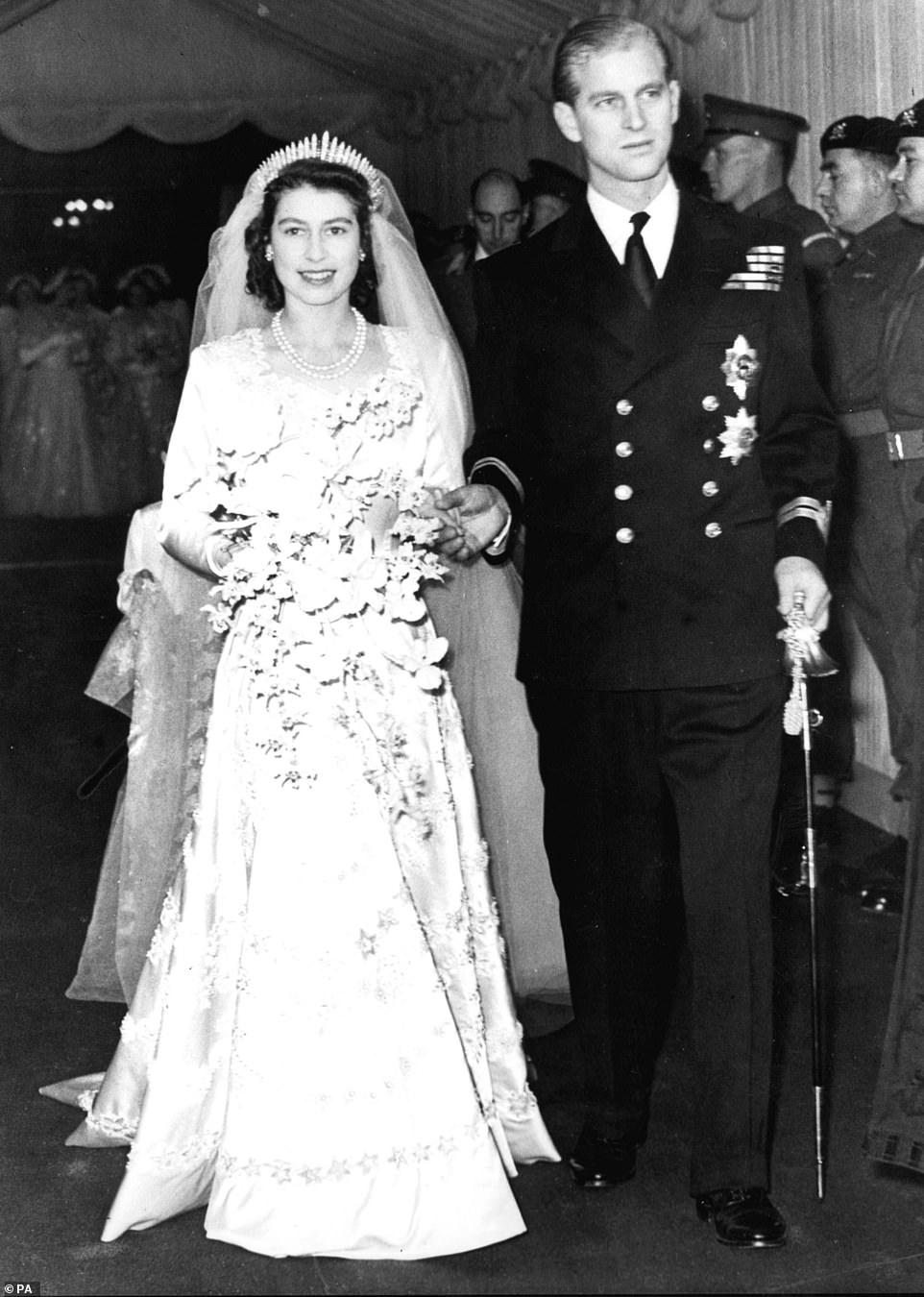 The Queen alongside the Duke of Edinburgh as they leave Westminster Abbey after their marriage on November 20, 1947. The Queen is wearing the same tiara that was worn by Princess Beatrice at her wedding to Edoardo Mapelli Mozzi on Friday 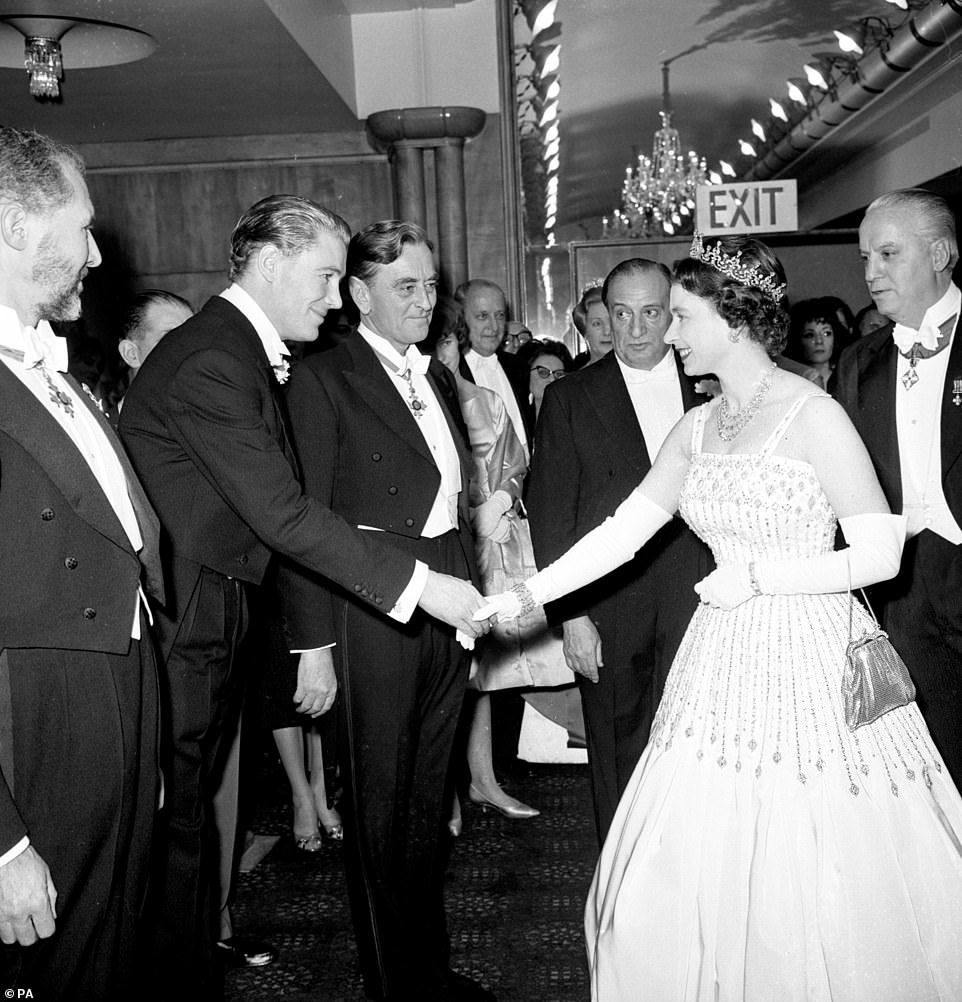 Queen Elizabeth II arriving at the Odeon in London’s Leicester Square for the Lawrence of Arabia film premiere on December 10, 1962. The Queen is wearing the same Peau De Soie taffeta dress by Norman Hartnell that was worn by Beatrice on Friday

Some have speculated that concerns over social distancing is why the wedding was held in secret so as to avoid crowds of well-wishers gathering nearby and potentially breaching government guidelines.

Family friends insisted the secretive nature of the wedding was not down to Andrew, who is noticeably absent from the official photographs, and his issues over the Epstein scandal.

The FBI wants to question him over his close friendship with the convicted paedophile, who killed himself while awaiting trial on further charges last summer.

Pressure on Andrew, 60, intensified following the arrest in the US of his close friend, Epstein’s ex-girlfriend Ghislaine Maxwell.

However, the sources said the secrecy was explained by Beatrice and Edo’s desire for a quiet, private ceremony and the fact they did not want to overshadow Sir Tom’s knighting at Windsor.

But Dario Mapelli Mozzi, Edo’s cousin once removed, told the Mail: ‘We heard it was postponed to next year but that was clearly to keep it secret. Maybe they did it now to be sure that the Queen would be there. 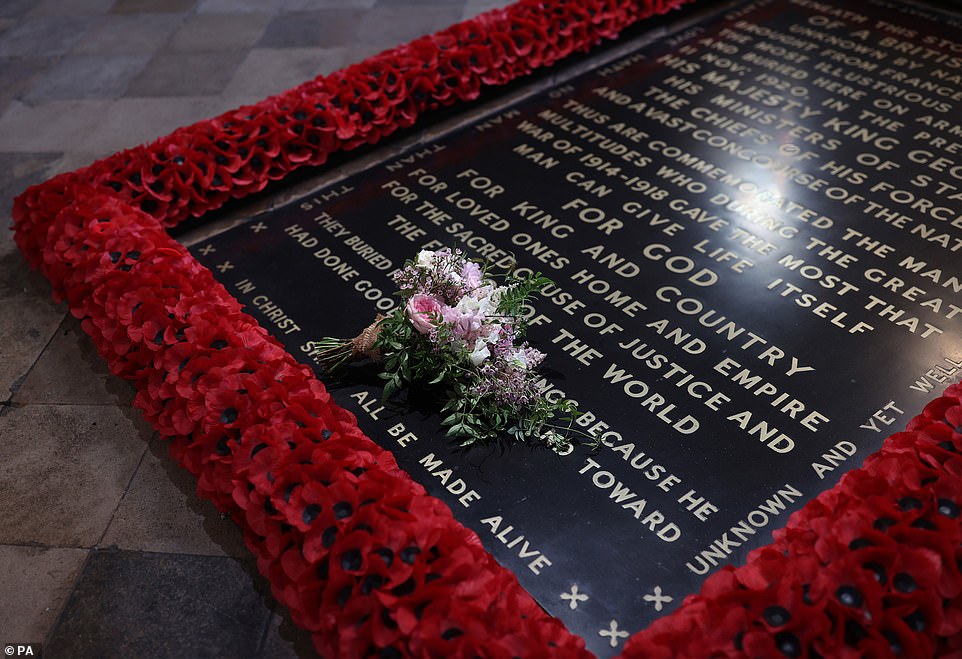 Princess Beatrice’s wedding bouquet in Westminster Abbey in London which, like those of other Royal brides, is traditionally placed on the Tomb of the Unknown Warrior.

‘Or perhaps because of the problems with her father they didn’t want to go overboard with publicity in case anyone criticised them.’

The wedding may have lacked pomp and pizzazz but it had intimacy, with 20 guests witnessing the couple exchange their vows.

Edo’s four-year-old son Wolfie served as both best man and page boy, while his niece Coco Yeomans, five, was a bridesmaid alongside her pageboy brother Freddie, three.

The party-loving Yorks ensured a high-spirited reception, featuring speciality cocktails, bespoke catering, an exquisitely decorated Indian-style tent, a bouncy castle and glamping pods for overnight guests. Beatrice was said to be ‘thrilled and super-excited’, telling a friend: ‘It’s been such a whirlwind.’

HOW THE MUMS LEAPT INTO ACTION

Sarah Ferguson and Edo’s mum Nicola Williams-Ellis leapt into action as soon as the Government hinted last month that weddings would soon be permitted again.

During lockdown, Beatrice had been staying with Edo and her future mother-in-law in the £2 million Cotswold house Nicola shares with sculptor husband David, Edo’s stepfather. 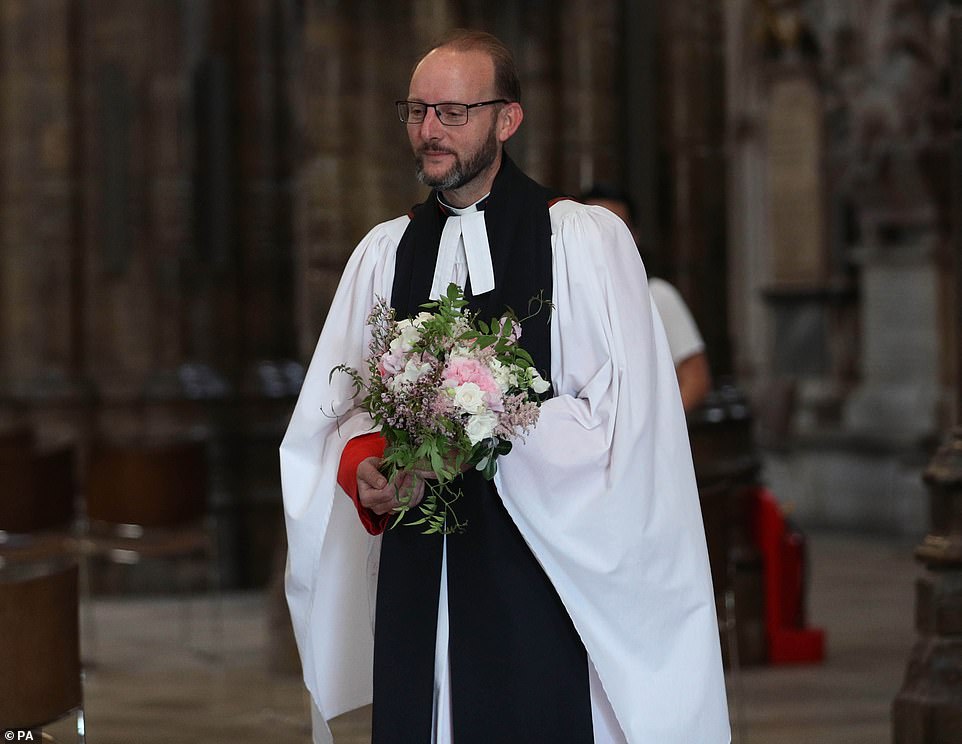 The young couple were ‘desperately sad’ that plans for a wedding at St James’s Chapel Royal in May with 150 guests and a reception at Buckingham Palace had to be cancelled, and resolved to marry ‘whenever possible’.

But they had only three weeks to organise caterers and florists, and for the Queen’s dresser Angela Kelly to help remodel and refit the 1960s Norman Hartnell evening gown to serve as a wedding dress.

Meanwhile, Canon Paul Wright, sub-dean of the Chapel Royal, and Canon Martin Poll, the Queen’s domestic chaplain, who officiated on Friday, hurriedly arranged the special wedding licence from the Archbishop of Canterbury.

Edo’s sister Natalia, 38, and her husband Tod Yeomans, 36, arrived with their two children Coco and Freddie on Thursday afternoon for a quick rehearsal. 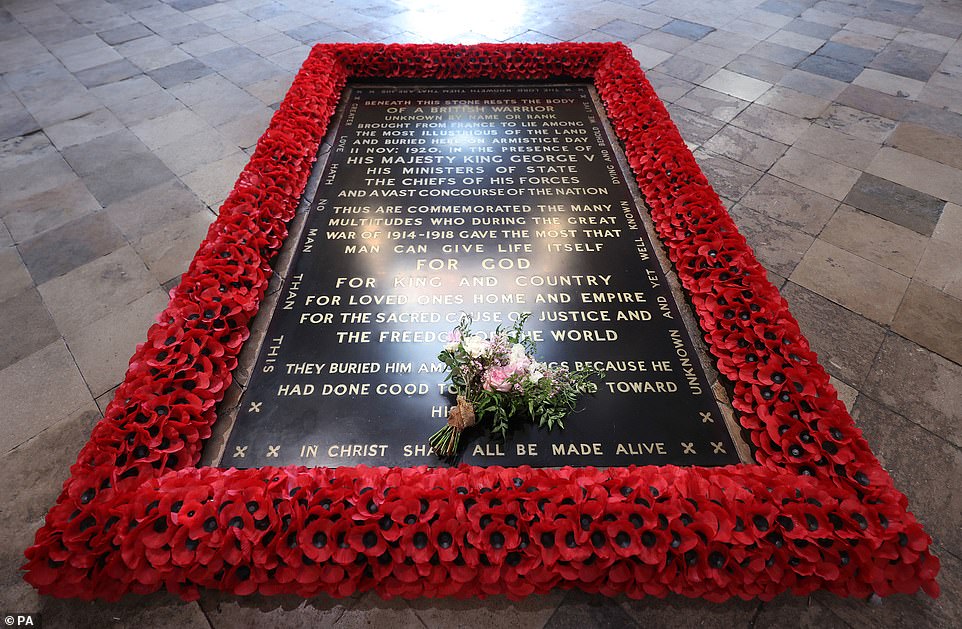 Beatrice and Edo broke with tradition by spending the night before the wedding together.

The secluded Chapel of All Saints is opposite Royal Lodge, so Prince Andrew walked the bride to the church and down the aisle. The Queen and Prince Philip had slipped in a through a side entrance, thus maintaining social distancing.

The church was decorated with pink and white delphiniums, roses, waxflower and hydrangeas from Windsor Great Park.

Sarah Ferguson and Mrs Williams-Ellis read the bride andgroom’s favourite poems: I Carry You In My Heart by E E Cummings and Shakespeare’s Sonnet 116.

There was no singing, but a selection of music was played together with the National Anthem.

Later, wedding photographs were taken, including two released to the media yesterday. Neither features Andrew.

The wedding breakfast was in a blue-and-white themed open-sided luxury Indian tent at Royal Lodge.

Andrew and Edo gave speeches and the newlyweds enjoyed their first night together as man and wife in a special glamping pod.

Edo and Bea are not thought to have any immediate honeymoon plans and hope to celebrate their wedding later in the year with a ‘huge party’.

A friend said: ‘They are just delighted they could marry in front of their family and closest friends.

It was particularly special that the Queen and Duke could come.’

He was wearing a rugby-style jersey emblazoned with the Order of the Garter motto: Honi soit qui maly pense – meaning ‘May he be shamed who thinks badly of it’.