BEIJING is back in coronavirus lockdown with the army rounding up locals after a highly contagious “mutant strain” shut down travel, it is claimed.

The country has gone into “wartime mode” amid fears of a second wave of the deadly disease, with panic shutting down travel in capital. 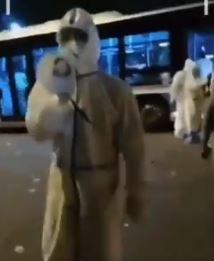 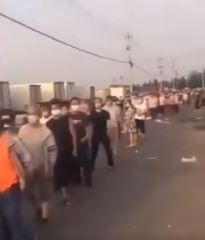 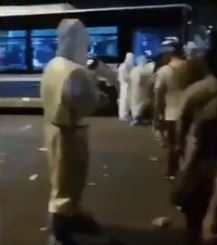 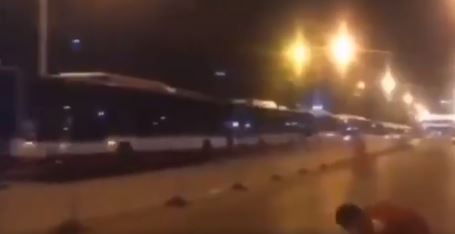 Footage shared by activist Jennifer Zeng shows people lining up to pack onto buses as officials in hazmat suits shout orders through megaphones.

Seven hotels were requisitioned as quarantine sites with people rounded up in an all-day operation after another outbreak in the city, she claims.

In a chilling echo of Wuhan’s deadly outbreak, many of the recent cases have been linked to a wholesale market, forcing the lockdown of neighbouring areas, say officials.

The sudden spike has been blamed on a more contagious strain of the bug than the one that ravaged Wuhan at the beginning of the pandemic, according to Yang Zhanqiu, a deputy director at the pathogen biology department at Wuhan University.

Beijing health officials said gene sequencing showed the virus strain causing the new outbreak was related to that in Europe.

It's the first time in eight weeks that Beijing has reported locally transmitted infections.

The 40 new cases diagnosed on June 16 included 27 in Beijing, bringing the city’s total to 106 since last Friday.

"Right now we have to take strict measures to stop the spread of Covid-19." 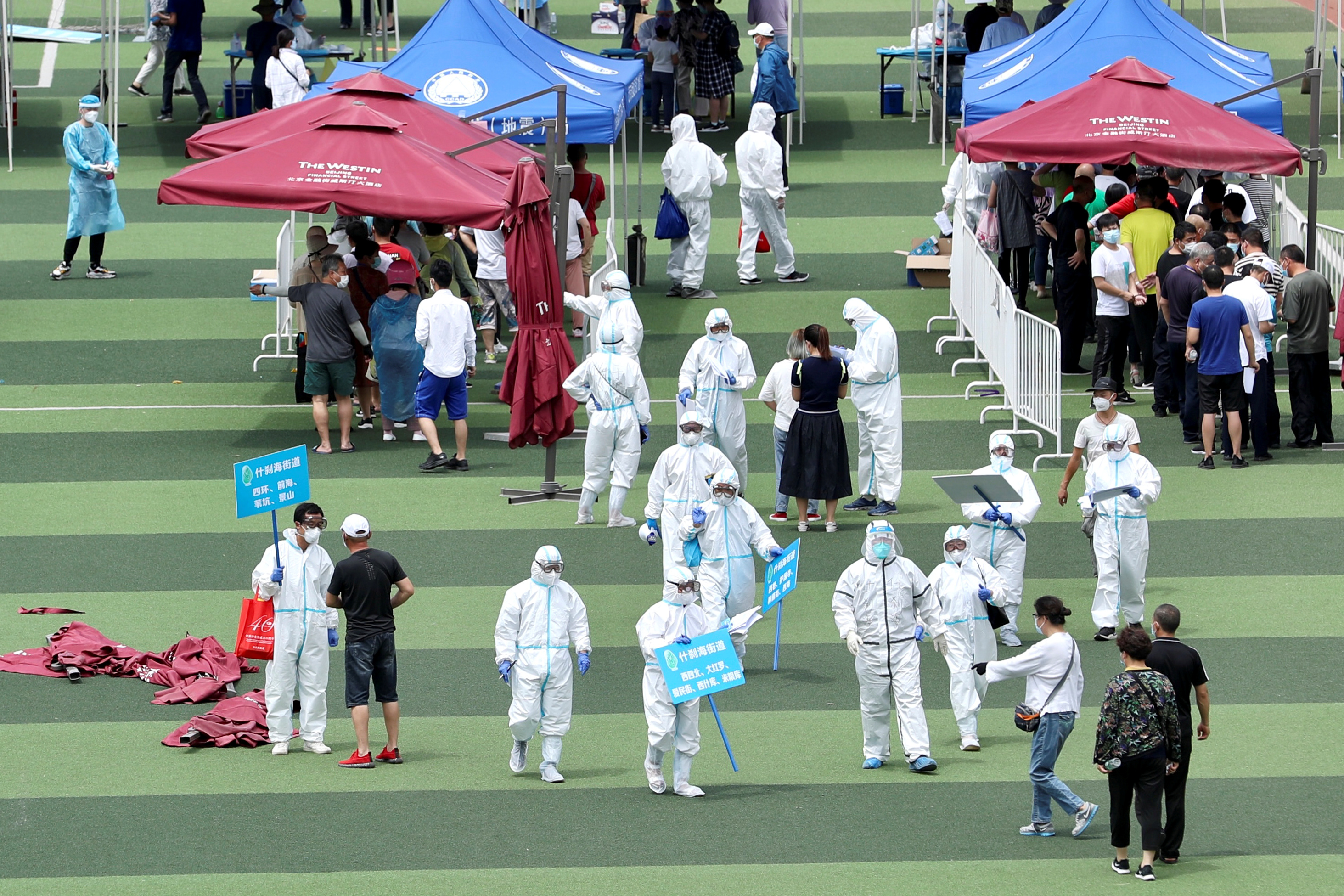 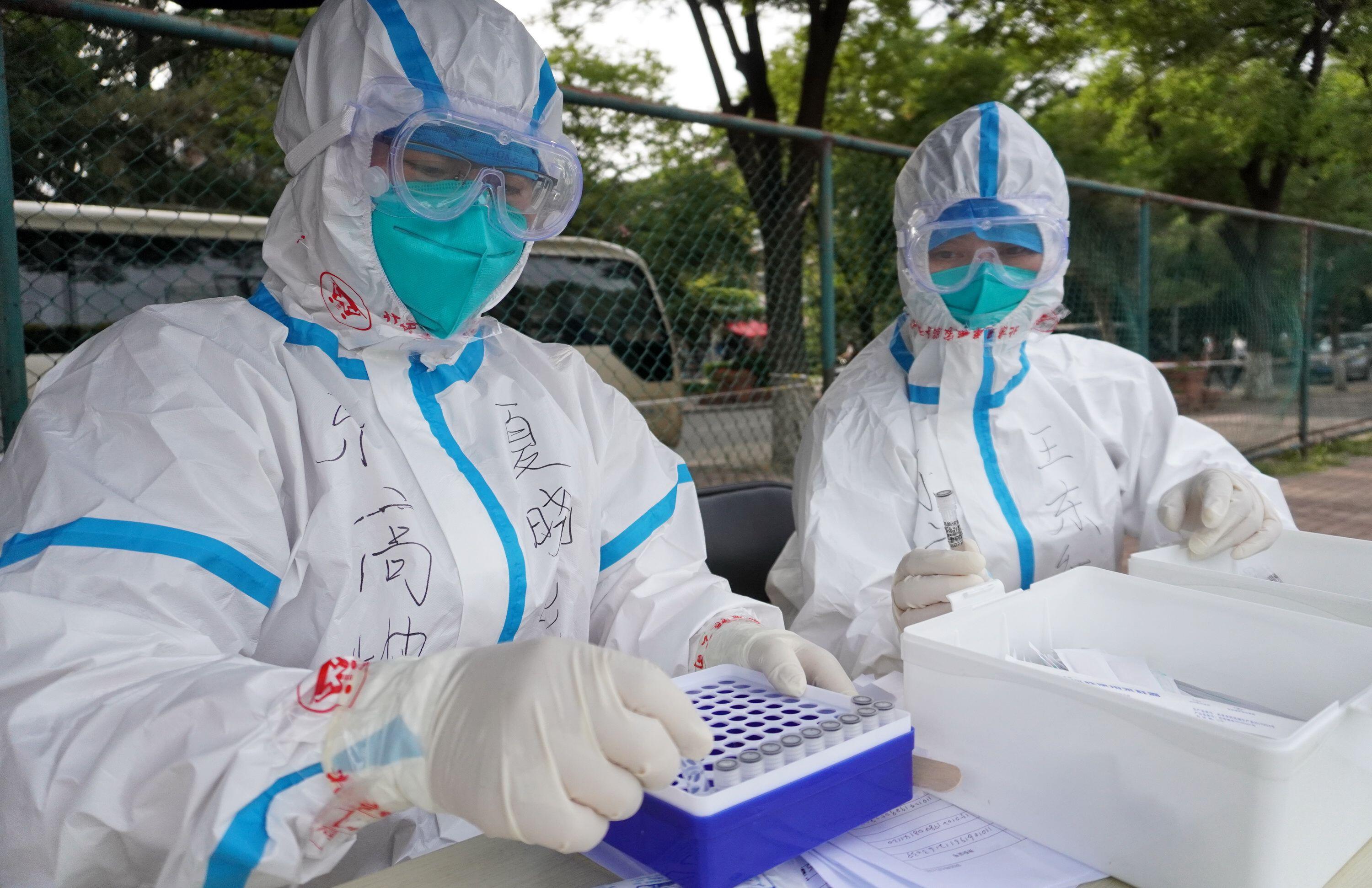 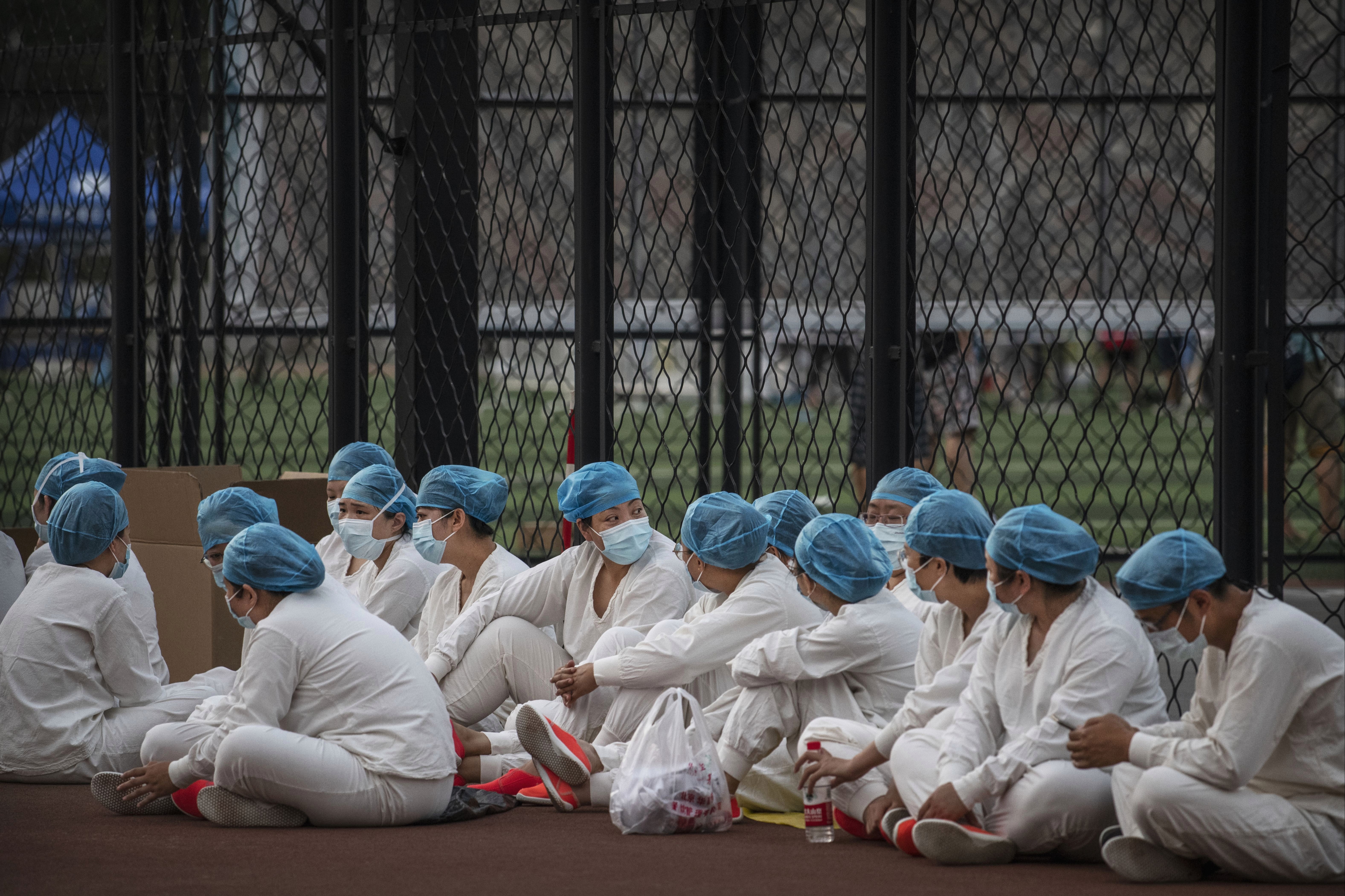 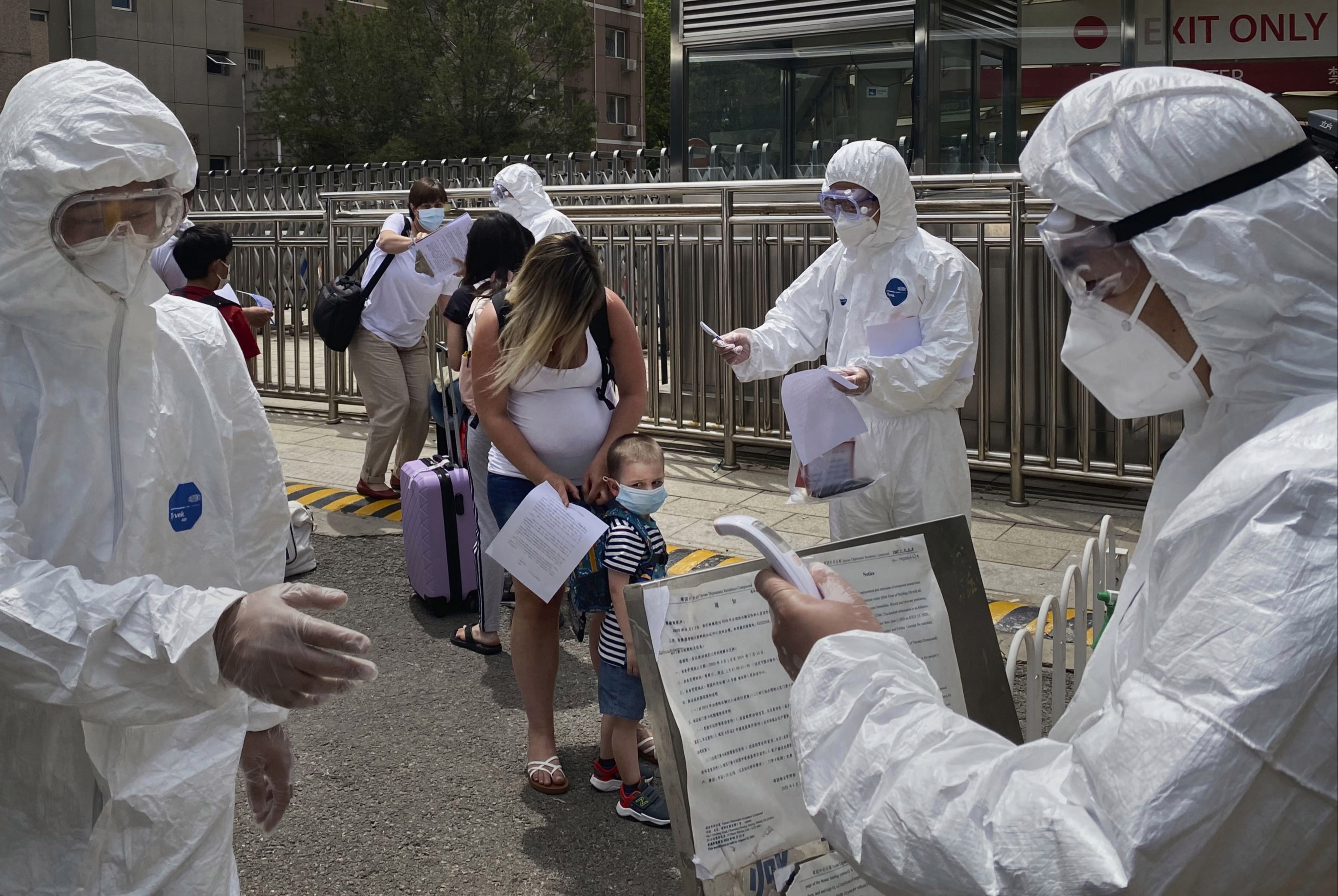 China’s top epidemiologist, Wu Zunyou, told media the next three days will be crucial in controlling the latest outbreak.

"Those who are infected might show symptoms in the coming two days.

"If the number of reported cases does not increase much, it can be said the epidemic has basically stabilised,” he told state broadcaster CCTV.

"Will there be the third and fourth, similar outbreaks in the market?”

Many of the recent cases have been linked to Beijing’s Xinfadi wholesale market, which sells most of the capital's fruit and veg. Thousands of tonnes of vegetables, fruits and meat change hands each day.

China increased testing and lockdown measures across swathes of the capital today to control its largest coronavirus outbreak in more than two months.

Authorities have been undertaking a mammoth task, testing market workers, shoppers visiting the market in the past two weeks and anyone else who came into contact with either group. 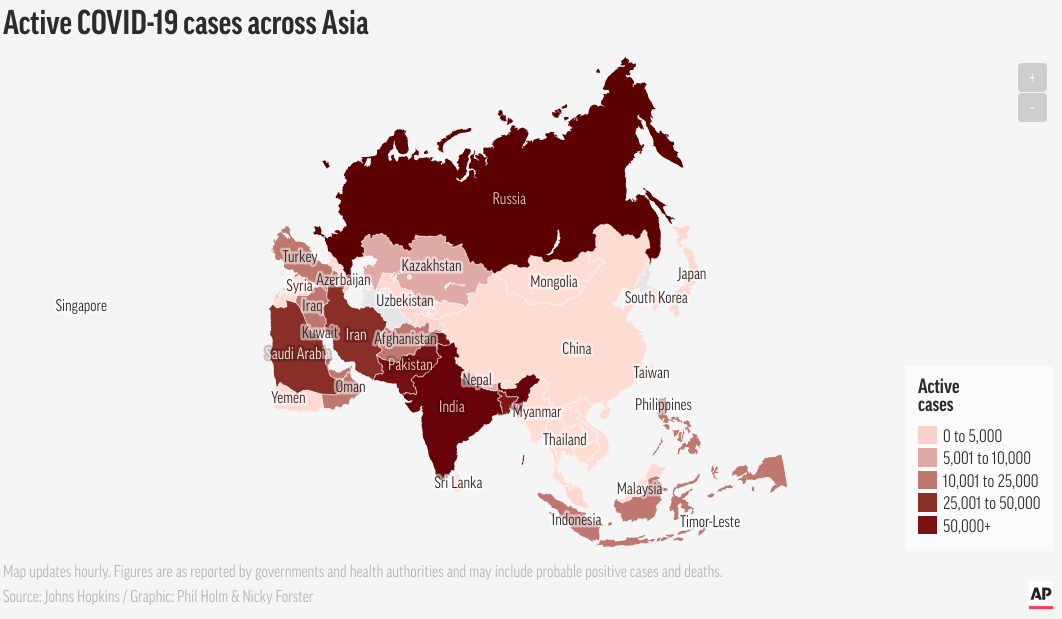 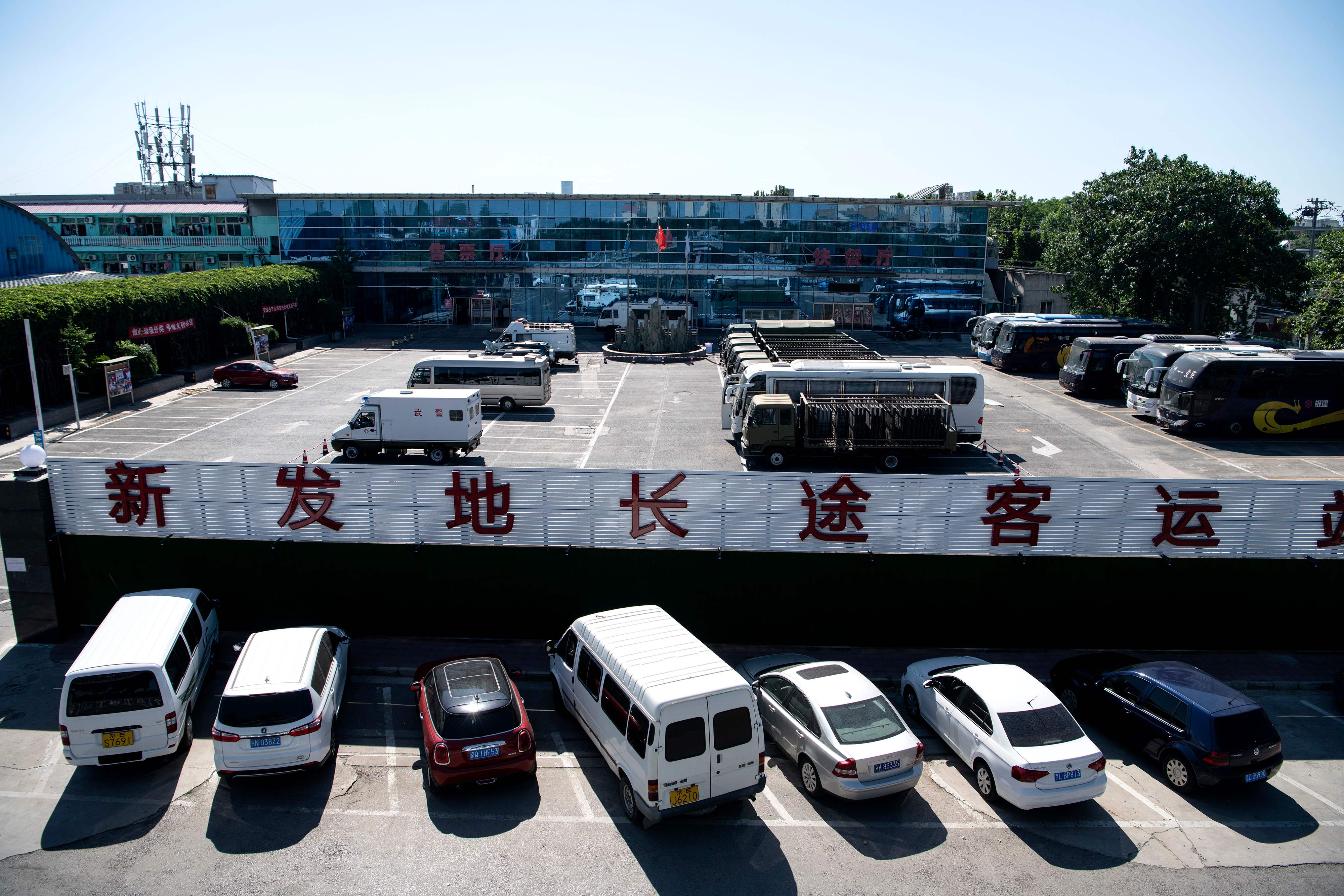 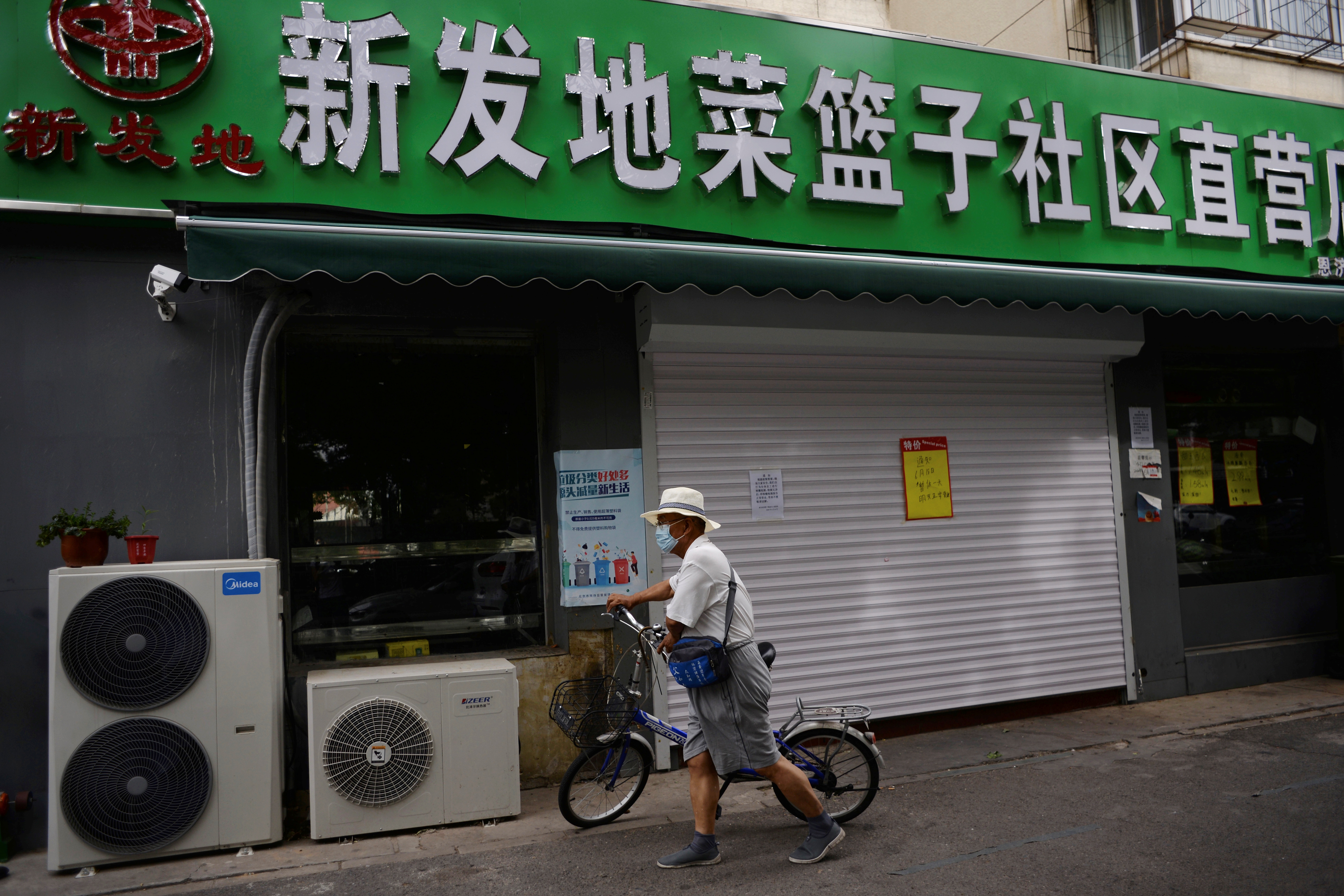 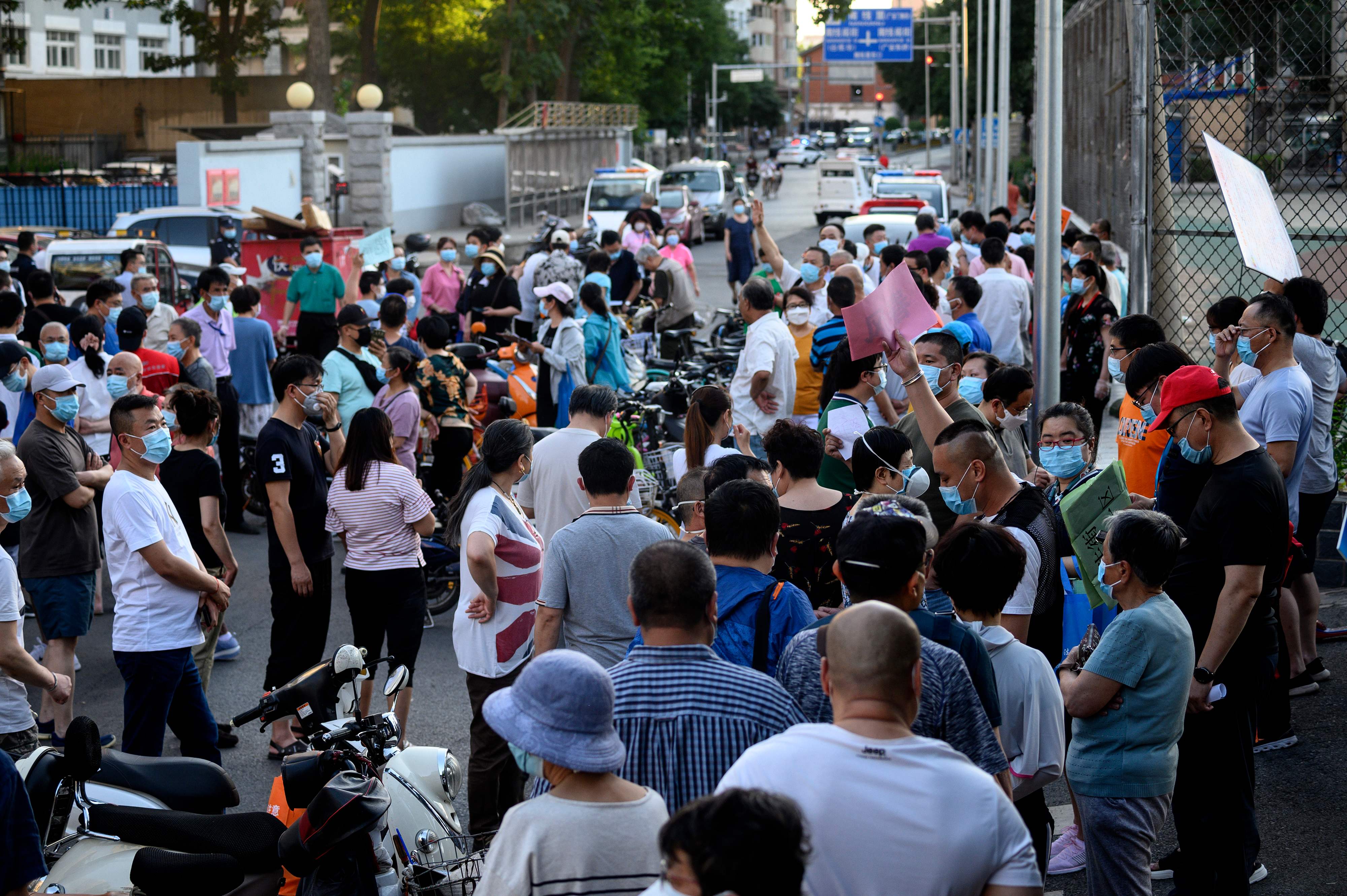 Fresh meat and seafood in the city and elsewhere in China was also being inspected on the unlikely chance that was how the virus spread.

Residential communities around Xinfadi wholesale market have been put under lockdown, along with the area around a second market, where three cases were confirmed.

Authorities are also barring residents of areas at high risk from leaving Beijing and those who have already left must report to local health officials as soon as possible for testing.

Taxis and car-hailing services have been banned from taking people out of the city. 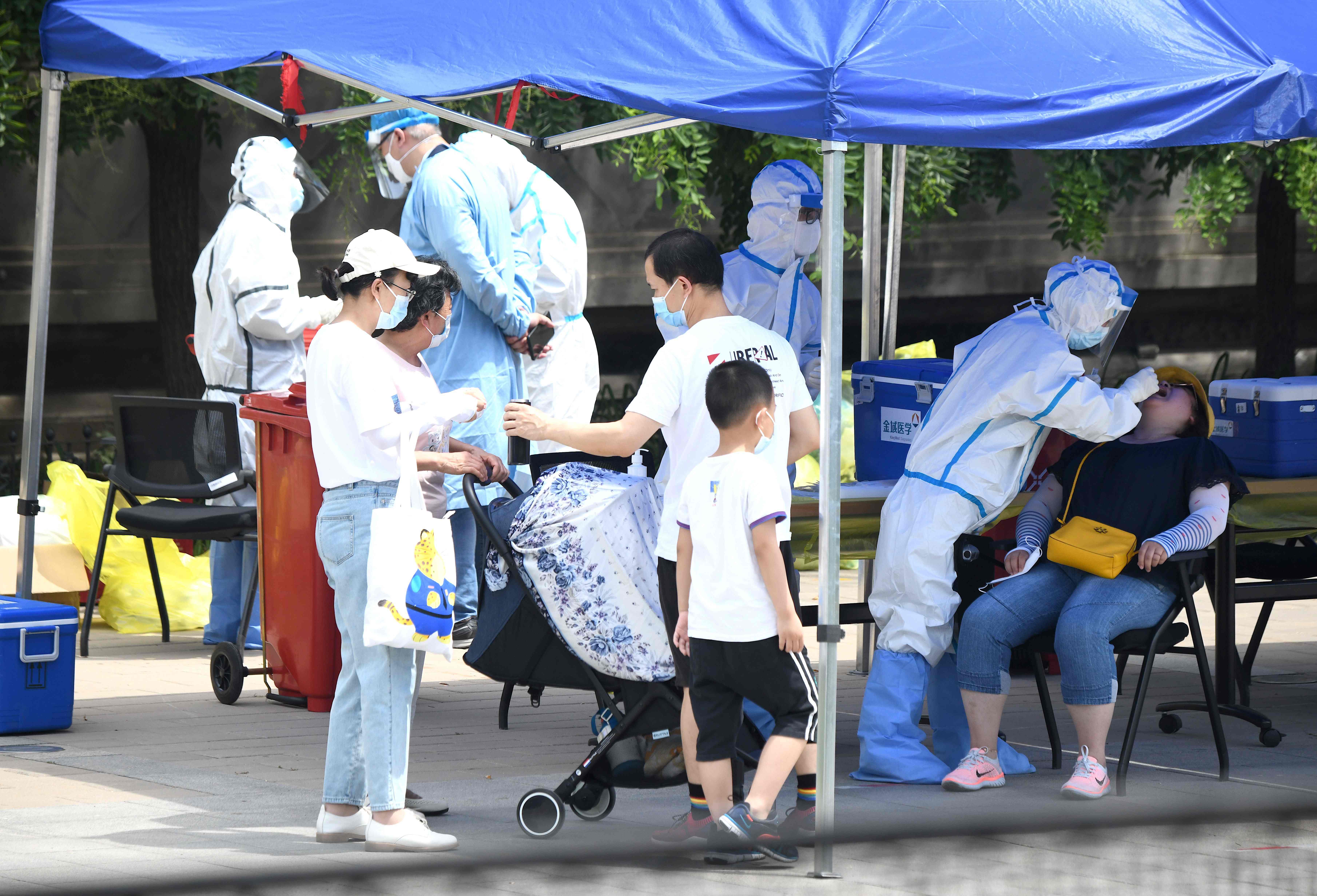 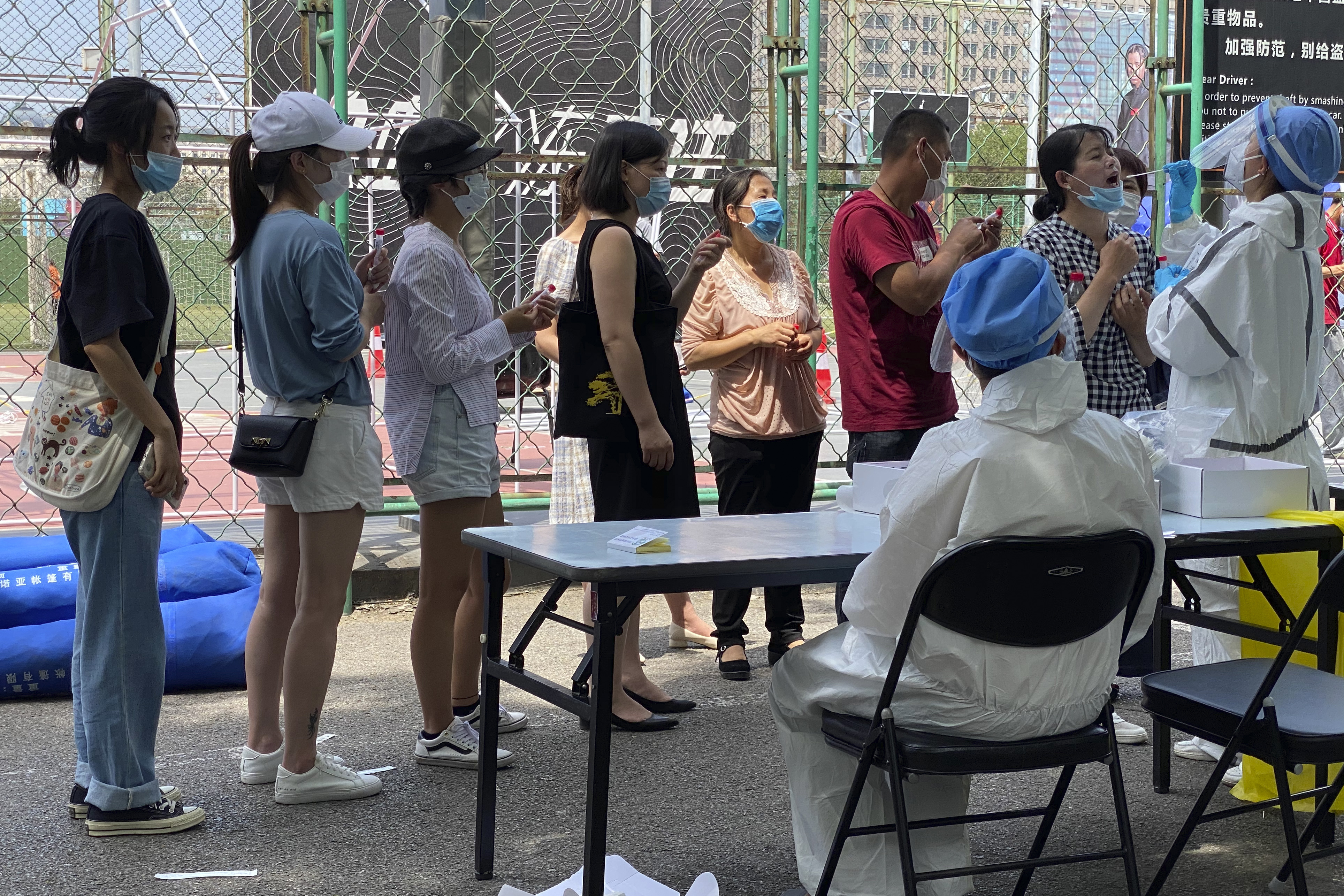 The number of passengers on buses, trains and subways will also be limited and it is mandatory to wear protective face masks.

China’s financial hub of Shanghai demanded some travellers from Beijing be quarantined for two weeks.

Wang Jiahe, 22, a local university student, said: "I’m so worried for Shanghai – just look at the new cases in Beijing.

"There is so much daily air and road traffic (between the cities)."

The stakes are high for Shanghai, which has been invited to host two Formula One races this season. US airlines are also poised to resumes flights to the financial hub.

Concerned about contagion risks, many provinces have imposed quarantine requirements on visitors from Beijing.

The most serious flare-up in China since February is stoking fears of a second wave of the respiratory disease which emerged in the central city of Wuhan late last year and has now infected more than eight million people worldwide.

Reuters reports that Beijing has gone into a “wartime” mode, with neighbourhoods having 24-hour security checkpoints, closing schools and banning wedding banquets.

Overnight, some parts of Beijing including the city’s old-style hutong neighbourhoods were fenced up.

One man told the news agency: “It’s a big neighbourhood with lots of office workers, so it is extremely inconvenient for a lot of people.”

Officials were relying on people to identify themselves as having visited Xinfadi market 9km away, residents added.

“How can you hope for people to be honest enough to voluntarily report their links with Xinfadi?” asked a male Huaxiang resident surnamed Yuan.

“Since we’re in a ‘wartime’ mode, the local authorities should test everyone.”

China has reported a total of 4,634 deaths from the virus among 83,181 confirmed cases.

The spike in infections emerged just as European nations were opening their borders to tourists for the first time in months.

The outbreak may disrupt plans to restart China Super League soccer matches as early as next month.

Coaches and players for Beijing Guoan, the city’s top team have been tested and given a week off because their training camp is in the same district as the source of the latest outbreak, local media reported.

China had relaxed most of its controls after the ruling Communist Party declared victory over the virus in March.

Beijing has now suspended Monday’s planned restart of some primary schools and reversed the relaxation of some social isolation measures.