Belarus opposition leader 'is being questioned by police'

The Belarus opposition leader, who was snatched by masked men on Monday and nearly deported, is being questioned by police.

Maria Kolesnikova is now in custody after being abducted on Monday and is being held in Mink prison as part of a national security probe.

The 38-year-old was driven to the border in the dead of night but she tore up her passport to foil authorities trying to deport her to Ukraine.

She has now returned to the capital Minsk and is being held in a pre-trial detention centre amid the ruthless crackdown by President Alexander Lukashenko.

Her lawyer Lyudmila Kozak described the allegations as an ‘absurd’ attempt to silence those who think differently according to Spiegel.

Ms Kozak said she was also ‘threatened with physical violence after her abduction by masked people in Minsk’ and was ‘bruised from the violent action’. 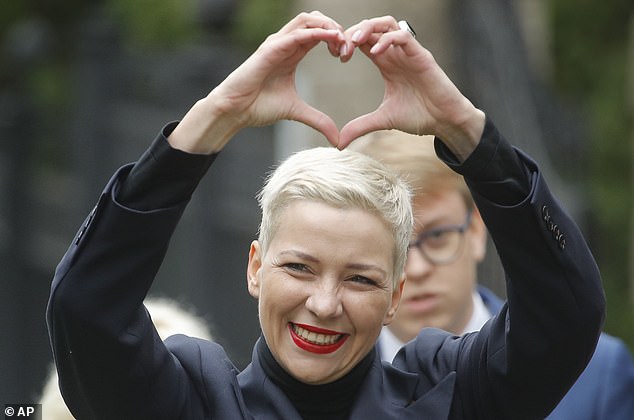 Opposition leader Maria Kolesnikova, who was snatched on Monday and nearly deported, is being held in Mink prison and has been ‘threatened with physical violence’

She said: ‘Maria feels good and brave despite the stress she has experienced in the past two days.’

If Ms Kolesnikova is convicted, she could spend up to five years in prison.

Solidarity rallies took place in Minsk on Wednesday, during which people demanded her release.

Fellow opposition politician Maxim Znak is the latest government critic to be snatched from his office by masked men wearing plain clothes.

He has been detained alongside Kolesnikova, authorities have confirmed.

The country’s Investigative Committee, which probes major crime, said in a statement that the two were being held as a probe continued into ‘calls urging action aimed at harming national security’.

Znak, a former lawyer, 39, was one of the last remaining members of the country’s opposition Coordination Council still at large.

Mass protests against Lukashenko have rocked his government since a disputed election on August 9. 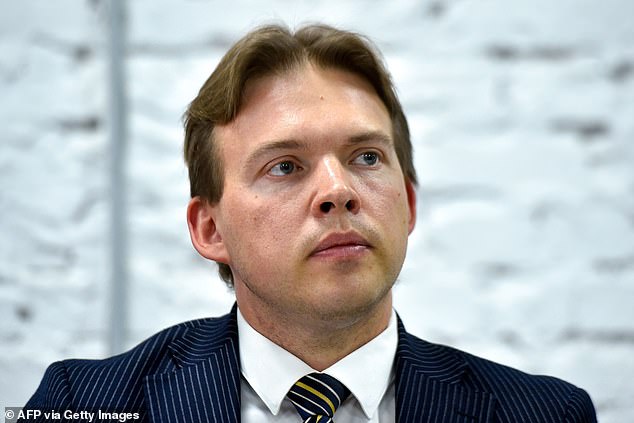 Maxim Znak has been taken from his office by masked men wearing plain clothes, his allies have claimed

But on Wednesday, he did not rule out calling early elections but said it was too soon to set a date amid the ugly scenes.

Znak, who previously worked as a lawyer for jailed presidential hopeful Viktor Babaryko, had been due to participate in a video call on Wednesday but did not show up, instead sending the word ‘masks’ to the group.

A witness reported seeing Znak being led down the street near his offices by several men in civilian clothes and wearing masks and he has since been detained.

Znak’s lawyer was cited as saying that his client’s flat was also being searched by the state investigative committee and that he was subject to legal proceedings.

Znak was the last member of the Coordination Council still active inside Belarus, other than Nobel prize-winning author Svetlana Alexievich, who has acted as a figurehead for the movement.

All the rest have fled or been forced abroad or been detained in a crackdown by Lukashenko’s security forces as he seeks to maintain his 26-year grip on power in the former Soviet republic.

Unprecedented demonstrations broke out after Lukashenko claimed to have defeated political novice Svetlana Tikhanovskaya and won re-election with 80 percent of the vote in the August 9 ballot. 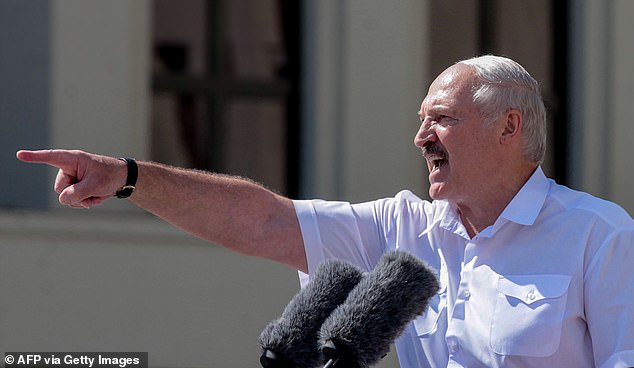 In an interview with Russian state media broadcast on Wednesday, Lukashenko said: ‘I am inclined to conduct an early presidential election. I do not rule this out.

‘I am saying this for the first time,’ he noted.

The opposition has urged Lukashenko to acknowledge defeat and step down so that fresh elections can be held according to international standards.

On Saturday night, Olga Kovalkova, an activist and confidant of opposition candidate Svetlana Tikhanovskaya, was ejected from the country by security forces.

She said agents of the Belarusian State Security Committee, or KGB, put her into a car, where she was told to lie on the floor, unaware where they were taking her. 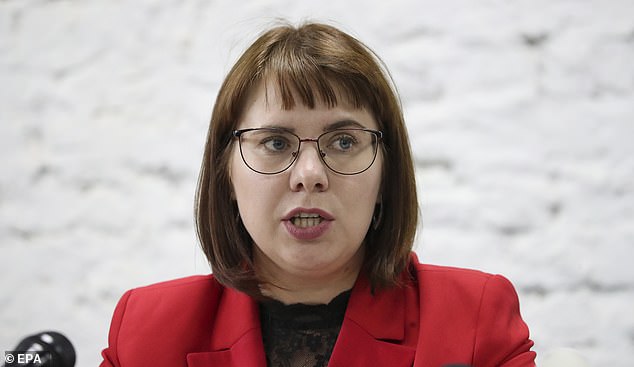 On Saturday night, Olga Kovalkova (pictured), an activist and confidant of opposition candidate Svetlana Tikhanovskaya, was ejected from the country by security forces

She was dropped off in no-man’s land between the Belarus and Poland border, and Polish border guards asked a bus driver headed for Poland to take her on board.

The Coordination Council said: ‘On the night of September 5, the Belarusian special services took Olga Kovalkova, a confidant of Svetlana Tikhanovskaya, to the Belarusian-Polish border and released her to a no-man’s land.’

She had been offered the choice of leaving the country or remaining behind bars with further prison terms.

On Monday, Kolesnikova was detained in the capital of Minsk along with two other council members.

They were driven early on Tuesday morning to the border, where authorities told them to cross into Ukraine.

When they arrived in a no-man’s land between the countries, Kolesnikova ripped her passport into small pieces to make it impossible for the authorities to expel her. She remained in custody on the Belarusian side of the border after the incident.

‘She was shouting that she won’t go anywhere,’ Rodnenkov said at a news conference in Kyiv.

‘Sitting in the car, she saw her passport on a front seat and tore it into many small fragments, crumpled them and threw them out of the window. After that, she opened the back door and walked back to the Belarusian border.’

He said that ‘Maria is in great shape, full of energy and spirits, as always.’

Anton Bychkovsky, spokesman for Belarus’ Border Guard Committee, confirmed she is in the custody of Belarusian authorities but refused to give any details of what happened on the border.

Border police made the extraordinary claim that Kolesnikova was ‘pushed out’ of a speeding BMW as it raced to escape the guards. 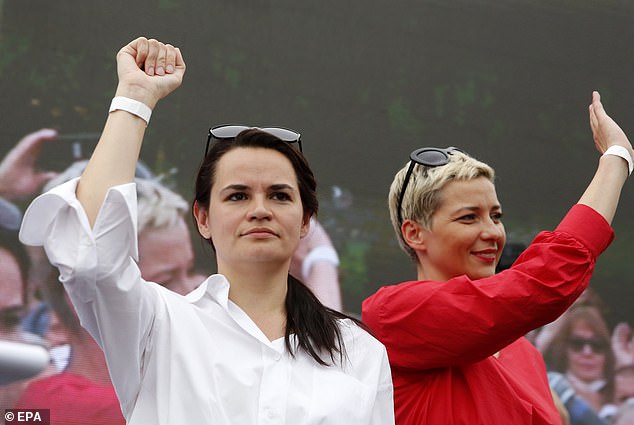 The Coordination Council was set up to ensure a peaceful transfer of power after main opposition candidate Svetlana Tikhanovskaya rejected Lukashenko’s claim to have been re-elected to a sixth term in the August election.

The disputed election has sparked the biggest anti-government demonstrations of Lukashenko’s 26-year rule, with tens of thousands taking to the streets for weeks to demand he resign.

Lukashenko’s security services have hit back with waves of arrests, deadly violence against protesters and a campaign of intimidation and expulsion against opposition leaders. 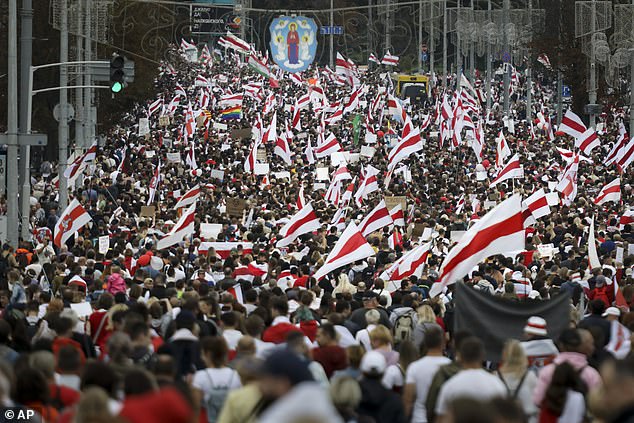 The disputed election has led to mass protests in Minsk, pictured here on Sunday with people waving opposition flags

The 66-year-old former state farm director has rejected criticism from the United States and the European Union, which said the election was neither free nor fair and shrugged off their demands to open a dialogue with the opposition.

In Washington, Secretary of State Mike Pompeo said in a statement the US and its allies are considering additional sanctions targeted at Belarus, and he expressed concern about the attempt expulsion of Kalesnikava.

‘We commend the courage of Ms. Kolesnikova and of the Belarusian people in peacefully asserting their right to pick their leaders in free and fair elections in the face of unjustified violence and repression by the Belarusian authorities, which included brazen beatings of peaceful marchers in broad daylight and hundreds of detentions September 6, as well as increasing reports of abductions,’ Pompeo said.

Sviatlana Tsikhanouskaya, the main opposition challenger to Lukashenko, left for Lithuania a day after the election under pressure from authorities.

Addressing the Council of Europe’s Parliamentary Assembly on Tuesday, Tsikhanuskaya called for international sanctions against Lukashenko and other government officials.

‘We need international pressure on this regime, on this one individual, desperately clinging onto power,’ she said.

Tsikhanouskaya stated that Lukashenko doesn’t have any legitimacy after stealing the vote, warning other countries against deals with the Belarusian government.

‘He does not represent Belarus anymore,’ she said.

In separate comments about the attempt to expel Kolesnikova, Tsikhanouskaya praised her as a ‘real hero,’ and said that ‘such actions are incapable of breaking the will of the people or their desire to change their country’s future.’ 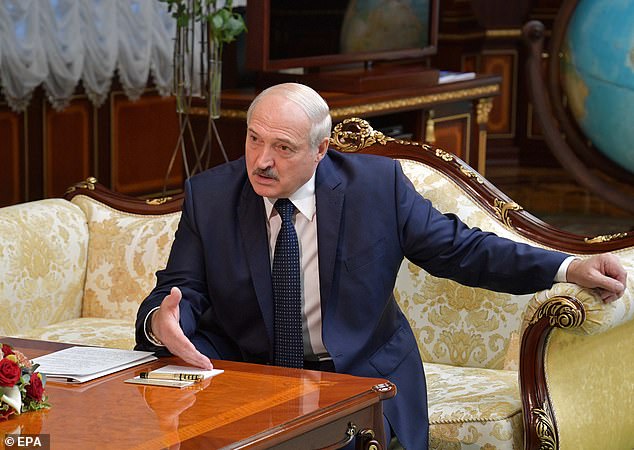 Kolesnikova, a 38-year-old flute player who led a popular arts center, entered politics just before the election. She led the campaign headquarters of a top potential challenger to Lukashenko, and when he was barred from running and jailed on charges widely seen as political, she joined Tsikhanouskaya’s campaign.

Despite the pressure on opposition activists, daily protests have continued and crowds have swelled on the weekends. An estimated 100,000 attended a rally Sunday, despite heavy rain.

Speaking in an interview, Lukashenko said it’s ‘tragic’ for him to face massive protests, but insisted that he has retained the support of most of the country.

Speaking on Russian state media outlet Russia-24, Lukashenko was quoted by one of the journalists present as saying: ‘I may have stayed [in power] a little too long. 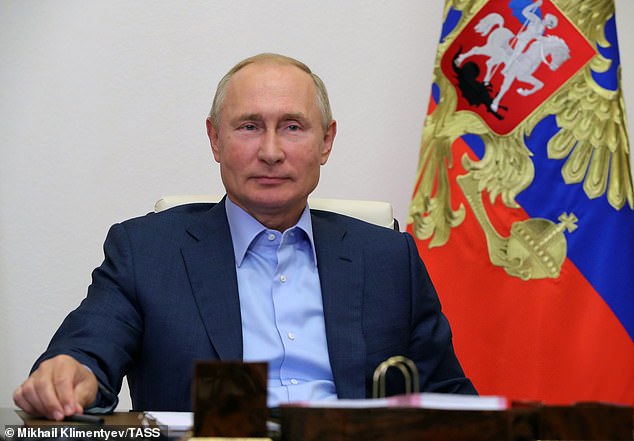 ‘But only I can really protect Belarusians now.’

Another reported that the President said: ‘I’m not gonna leave just like that. I’ve built up Belarus for a quarter-century, I won’t just give it up. Besides, if I leave, my supporters will be slaughtered.’

‘You know what we have come to with the establishment and leadership? If Belarus falls today, Russia will be next,’ Lukashenko added.

Amid Western criticism, Lukashenko has relied on support from Moscow, his main sponsor and ally.

Russian President Vladimir Putin has said he stands ready to send police to Belarus on Lukashenko’s request if rallies turn violent but there is no need for that yet.

It comes as Belarus’s leading opposition figure Svetlana Tikhanovskaya on Wednesday called on Russians not to believe propaganda trying to ‘poison’ ties between the two peoples and thanked those backing Belarusians’ ‘fight for freedom’.

Tikhanovskaya’s first major address to Russians came after President Alexander Lukashenko gave a wide-ranging interview to a group of journalists from Russian state media on Tuesday.

‘It is very important not to damage ties between the two countries,’ 37-year-old Tikhanovskaya said in the video address from EU member Lithuania, where she has taken shelter after being forced out of the country.

‘Let’s not allow propaganda to poison ties between two friendly peoples, and unscrupulous politicians to damage the interests of both Belarus and Russia,’ she said.

She said that a month-long protest movement in Belarus was not aimed at Russia and thanked independent Russian journalists for coverage of the demonstrations.

‘We… are very grateful to the Russians who support the Belarusian people’s fight for freedom,’ she said.

Unprecedented demonstrations broke out in Belarus after Lukashenko, who has ruled the ex-Soviet state for 26 years, claimed to have defeated Tikhanovskaya and won re-election with 80 percent of the vote on August 9.

Lukashenko has refused to quit and his security forces have detained thousands of protesters, many of whom accused police of beatings and torture.

Several people have died during the crackdown.

No date has been set, but Lukashenko is preparing to travel to Moscow for talks with Russian President Vladimir Putin.

Lukashenko gave the interview to Russian journalists including Margarita Simonyan, editor-in-chief of Kremlin-controlled channel RT, in which he warned that if his government falls, ‘Russia will be next’.

Anti-Kremlin placards could be seen at a huge protest march that took place in Minsk on Sunday.