A Belgian biotech firm claims it has developed a foolproof coronavirus antibody test that is 100 per cent accurate.

Liege-based ZenTech said it had started making tens of thousands of its  government-certified tests a week.

Zentech plans to roll them out in Belgium first before scaling up manufacturing to three million per month so the tests can be used in other European countries.

The devices detect if someone has previously had coronavirus and has since recovered, even if they are unaware they were infected. Results take 15 minutes.

Scientists say they are crucial for countries coming out of lockdown because they can tell who is likely to have immunity to the virus.

The announcement will raise hopes for antibody testing in the UK, where the Government has struggles to one reliable enough for mass-use.

Britain says it will not consider rolling out any antibody test that is less than 98 per cent accurate.

There are two different types of antibody tests – one which is done at home and takes a few minutes, and another which is posted to a lab to be analysed.

Both versions of the test are carried out using a finger pricker to extract a blood sample. Zentech’s test is not suitable for home-use. 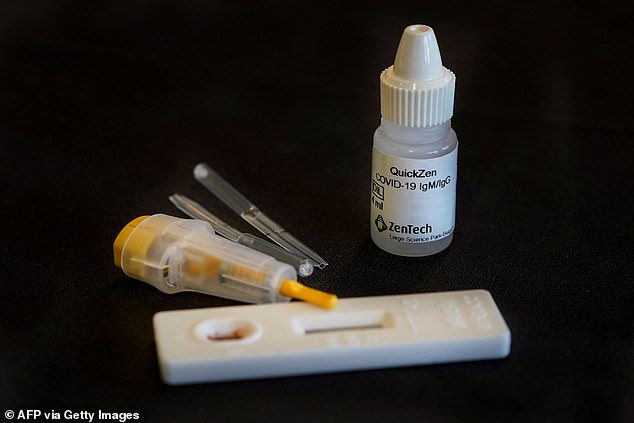 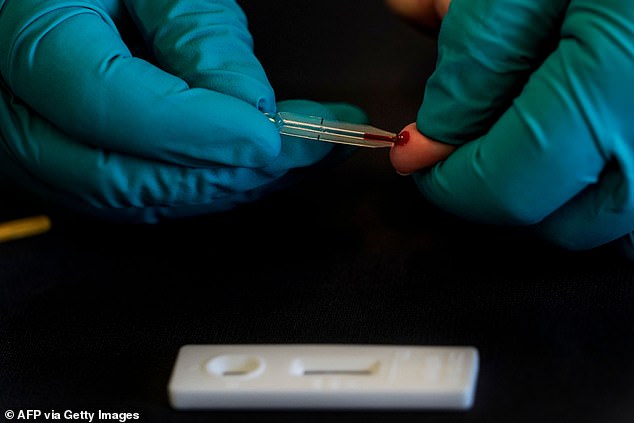 The company, based in Liege, said it had started making tens of thousands of its government-certified tests a week 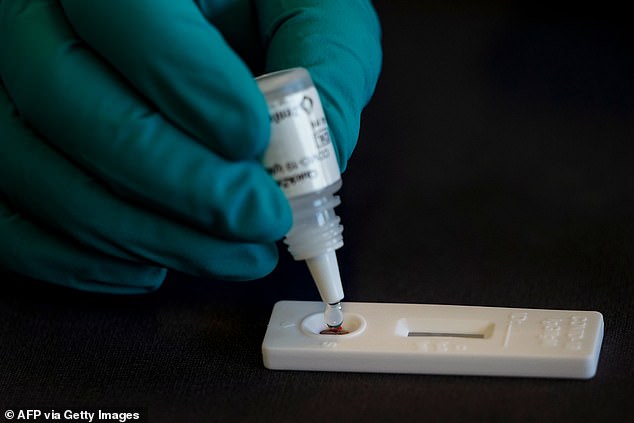 Founder and CEO, Jean-Claude Havaux, said: ‘[The tests’] sensitivity is 100 per cent – meaning all patients who have COVID-19 antibodies, we see them with our test.

An antibody test is one which tests whether someone’s immune system is equipped to fight a specific disease or infection.

When someone gets infected with a virus their immune system must work out how to fight it off and produce substances called antibodies.

These are extremely specific and are usually only able to tackle one strain of one virus. They are produced in a way which makes them able to latch onto that specific virus and destroy it.

For example, if someone catches COVID-19, they will develop COVID-19 antibodies for their body to use to fight it off.

The body then stores versions of these antibodies in the immune system so that if it comes into contact with that same virus again it will be able to fight it off straight away and probably avoid someone feeling any symptoms at all.

To test for these antibodies, medics or scientists can take a fluid sample from someone – usually blood – and mix it with part of the virus to see if there is a reaction between the two.

If there is a reaction, it means someone has the antibodies and their body knows how to fight off the infection – they are immune. If there is no reaction it means they have not had it yet.

‘We don’t want, and don’t intend for, these tests to be used by just anybody. It’s not a pregnancy test. It’s really pretty complicated to carry out and to interpret the results.’

He emphasised that the test kits were only for medical professionals, first in Belgium and then later in other countries in the EU and beyond.

Antibody tests are seen as a crucial tool for determining who has had COVID-19 – especially non-symptomatic carriers – and could therefore be immune to it.

Such tests could pave the way to allowing people to return to work as countries mull easing widespread lockdown measures.

That could be especially important for healthcare workers on the front line of the  pandemic.

As a result, labs in several countries are racing to roll out huge numbers of reliable testing kits.

But the World Health Organization has warned that while reliable testing is welcome, the presence of COVID-19 antibodies is not proof that an individual is immune.

Even if there was immunity, it says, it is unknown how long it might last.

Dr Pascale Huynen, clinic head of the microbiology unit in Liege’s university hospital – which confirmed ZenTech’s test was reliable to 97 per cent – echoed the WHO.

‘Nobody knows if the (COVID-19) antibodies are protective,’ she said.

She added that scientists also do not know how long immunity could last, or whether the new coronavirus might mutate around any initial immunity, as happens with the flu.

ZenTech’s test, she said, simply indicates whether a patient has ‘come into contact’ with COVID-19 with a positive or negative result. It does not show the level of antibody response. 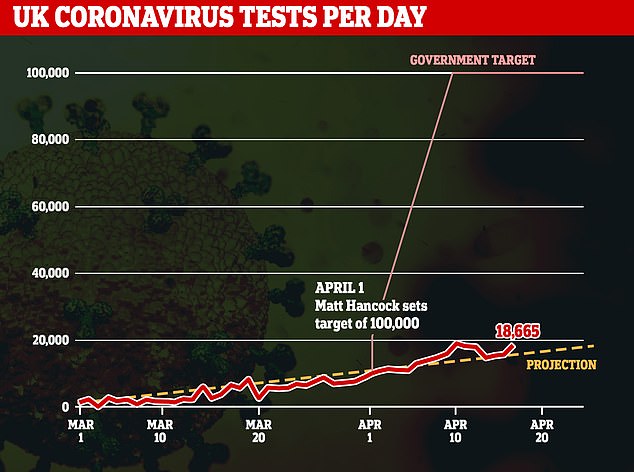 Pressure is mounting on the Government to introduce antibody tests as the UK looks to ease lockdown. Health Secretary Matt Hancock promised 100,000 tests would be carried out a day by the end of April – but Britain isn’t even managing a quarter of that

Britain paid two Chinese companies an estimated £16 million for two million coronavirus antibody tests which officials then found were not accurate enough to be rolled out.

The UK, along with every other country in the world, is still trying to find a test which can be mass produced which shows if someone has had the disease and now has immunity to it.

The government pounced on an early offer of potential tests produced in China with the New York Times reporting officials agreed to pay approximately $20 million to secure the home testing kits.

However, when the antibody tests were put through their paces they were found not to be sufficiently accurate and as a result could not be used.

Officials are now scrambling to try to get the money back.

Downing Street today did not deny the claims but the Prime Minister’s Official Spokesman said he was not aware of the specific $20 million figure.

The spokesman said: ‘Where tests are shown not to have any prospect of working then we will seek to recover as much of the costs as we can.’

Officials have previously insisted that they had only purchased the minimum number of antibody test needed to conduct initial trials with full orders contingent on the kits actually working.

But that in itself is useful for determining the spread of the virus in a population, and for patients who have not received a nasal swab tests that detect whether a person is in the infectious phase, thought to last around two weeks.

Pressure will now begin mounting on the UK Government to look into the tests. Minister promised weeks ago that antibody tests would be rolled out en-masse.

Britons were told they would be able to buy them from Amazon or Boots.

But none have so far proved to be reliable enough for the public.

The Medicines and Healthcare products Regulatory Agency says no test under 98 per cent accurate is safe for mass-use.

However some scientists say that even imperfect tests which lack sensitivity can be used to estimate the true scale of infection.

Eleanor Riley, professor of Immunology at the University of Edinburgh, told The Guardian: ‘Antibody tests – even if they lack some sensitivity – can be used to estimate what proportion of the population has already been exposed to the virus.

‘This is really helpful in telling us whether there is likely to be widespread immunity in the population and thus how likely there is to be a second wave of infections (and how big that wave might be), once the social-distancing measures are relaxed.’

There have only been 4,800 antibody tests carried out on COVID-19 patients in the UK. They are being trialled at the Defence Science and Technology Laboratory at Porton Down, near Salisbury.

By comparison, Germany is trialling the tests on tens of thousands of its population.

Later it announced it had placed provisional orders for 17.5 million tests from nine firms including some based in the UK.

Among them were two tests made by Chinese companies. Britain paid an estimated £16 million for them.

But the deals were on the condition that they could pass reliability tests by scientists at Oxford University.

Researchers at the prestigious university did not approve any of them, meaning it could now be months before they are used in the UK, if at all.

The tests were said to give ‘false positive’ results too often, meaning they incorrectly tells people they are immune.

This might give people false confidence that they can’t catch the bug and put them at risk of infection.

After being stung by the faulty Chinese antibody tests, the UK Government is said to now be looking for ‘home grown’ devices made by British firms.

But UK-based manufacturers are struggling to access blood samples of infected patients to trial their devices on. Essex-based Biosure said there was ‘a national shortage’ of samples.

It is now calling for blood donations from members of the public who were either diagnosed with, or were suspected of having, the virus.

A spokesperson told MailOnline: ‘We have discovered there is no current UK based bio-bank for confirmed positive COVID-19 blood samples.

‘We recognise the Government is under immense pressure with this global crisis, so for swift action we need to call to the nation for urgent support.

‘We are asking people to fill in an on-line questionnaire so we can build a database of people who have been diagnosed with COVID-19 and who would, if needed, be prepared to provide a small sample of their blood.

‘People who fit the criteria will be contacted and sent a collection kit though the post, so that a blood sample could be self-collected at home and posted back for inclusion in our validations.’