New York: A new study of blood specimens collected from 24,000 Americans found evidence that COVID-19 likely was present in the US as early as Christmas Eve 2019.

The new retrospective research, published online Tuesday by the journal Clinical Infectious Diseases, found that nine people spread across Illinois, Massachusetts, Wisconsin, Pennsylvania and Mississippi had detectable COVID-19 antibodies in their bloodstreams when they participated in the government’s All of Us Research Program early last year. 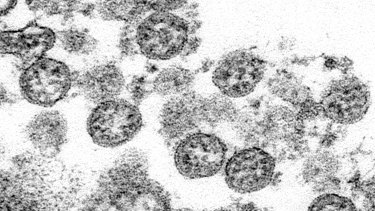 Image of coronavirus particles from what was believed to be the first US case of COVID-19. A new analysis suggests the coronavirus popped up in the US in December 2019, weeks before cases were first recognised by health officials. Credit:AP

The positive specimen collected from one Illinois-based patient on January 7, 2020, suggests “the virus may have been present in Illinois as early as December 24, 2019,” a full month before Illinois confirmed its first official case of COVID-19 on January 24, 2019, the study found.

The disclosure comes as coronavirus deaths surpass 600,000 in the US.

Participants who reported antibodies against SARS-CoV-2 were likely exposed to the virus at least several weeks before their sample was taken as the antibodies do not appear until about two weeks of infection, the researchers said.

Of the seven samples, three were from Illinois, where the first confirmed coronavirus case was reported on January 24, while the remaining four states had one case each. Samples from participants in Illinois were collected on January 7 and Massachusetts on January 8.

The data suggests the virus was in the US states far from the initial hotspots and areas that were considered its points of entry into the country, the study said.

“Data suggest that more rapid and widespread implementation of testing could have allowed us to better realise the spread might have been worse than initially thought, perhaps influencing our level of response,” said Michael Breen, director of infectious diseases and ophthalmology at GlobalData.

The data backs a Centres for Disease Control and Prevention study that suggested the virus may have been circulating in the United States well before the first COVID-19 case was diagnosed on January 19, 2020.

“This study allows us to uncover more information about the beginning of the US epidemic,” said Josh Denny, a co-author of the study that was published in the journal Clinical Infectious Diseases.

The United States has so far reported 33.6 million cases, according to a Reuters tally.