Bodies of 12 beheaded expats are found after ISIS massacre

The bodies of 12 beheaded expats have been found after an ISIS massacre in a Mozambique town where a British worker was killed in a desperate escape bid.

The nationalities of the 12 people found ‘tied up and beheaded’ in the northern town of Palma cannot yet be confirmed, a local police commander said.

Their bodies were found near to natural gas projects worth £43.6billion.

They are all believed to be foreigners because they are white, Commander Pedro da Silva said.

Standing near to an area of disturbed earth where he said he buried the bodies himself, Commander Silva told state broadcaster TVM: ‘They were tied up and beheaded here.’

The latest attack comes less than a month after dozens of innocent people were killed when Islamist insurgents launched a raid in Palma on March 24, including 50-year-old Briton Philip Mawer. 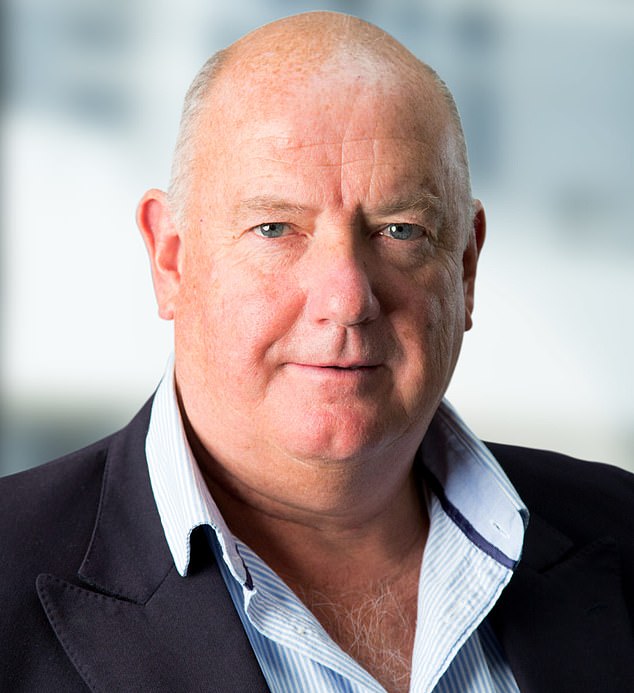 The latest attack comes less than a month after dozens of innocent people were killed when Islamist insurgents launched a raid in Palma on March 24, including 50-year-old Briton Philip Mawer (pictured) 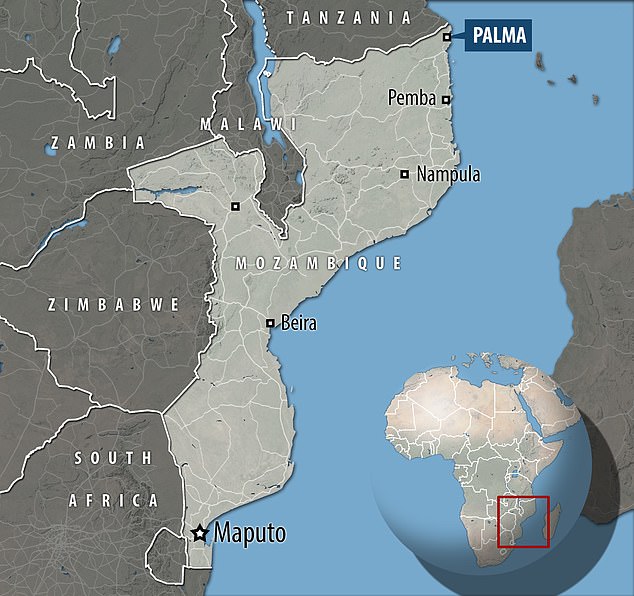 The nationalities of the 12 people found ‘tied up and beheaded’ in the northern town of Palma (pictured) cannot yet be confirmed, a local police commander said 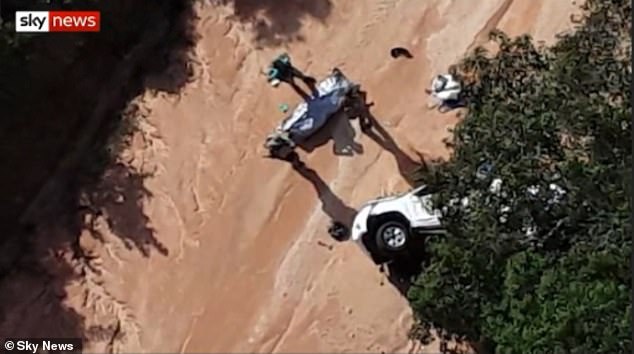 A body matching Mr Mawer’s description was pulled from the wreckage of a car destroyed in the attack.

It is believed he was fleeing from the siege by ISIS-linked insurgents at the Amarula Hotel.

He was working for RA International, a Dubai-based firm that provides living quarters and other logistics for expatriate workers.

The rise of ISIS in Mozambique

Mozambique is a majority Christian country, with Muslims comprising around a fifth of its population.

A religious movement, Ansar al-Sunna, first appeared in 2015 in the north of the country, formed by followers of radical Kenyan cleric Aboud Rogo Mohammed who has been linked to the 1998 US embassy bombings.

The group attracted disaffected young men who resented a lack of opportunities in an area of rich natural resources.

But in 2017, the group starting launching attacks and became known locally as al-Shabab, although they do not have any known connection to Somalia’s jihadist rebels of that name.

Militants started posting photos on the encrypted messaging service Telegram posing in front of the ISIS flag and praising its then leader Abu Bakr al-Baghdadi.

Islamic State then confirmed that jihadis in Mozambique had joined its Central Africa Province division (ISCAP), along with militants in the Democratic Republic of Congo.

ISIS have since claimed responsibility for many of the attacks carried out in Mozambique, including brutal beheadings and massacres, often posting photos of the victims online.

In an official ISIS news bulletin in June last year, leaders taunted the West and African nations for failing to stop the insurgency in Mozambique, and said its interest there is financial with the country’s huge coal and gas reserves.

The militants still refer to themselves as al-Shabab but they are now strongly considered to be an arm of ISIS, which was confirmed by US officials in December.

As part of ISCAP, al-Shabab is part of ISIS’s formal structure and the jihadi group in the Congo allegedly helps fund its Mozambican counterparts.

Attacks have become increasingly sophisticated, using new and advanced weapons which indicate the group’s involvement in the militant network.

The rebels are mainly active in Cabo Delgado province and their attacks became much more frequent and deadly in the past year as they look to hold strategic towns.

In August, they captured the port town of Mocímboa da Praia and nearby villages, one of the first territory gains by ISIS in months.

The terrorist group then declared Mocímboa da Praia the capital of ISCAP.

The insurgents are fighting against Western and Christian values as they seek to install a radical form of Islam and Sharia law in the country, targeting civilians as security forces struggle to quell their uprising.

Their attacks have left an estimated 2,600 dead and caused 670,000 to flee their homes, creating a humanitarian crisis.

US special forces arrived in Mozambique this month to train marines in counterinsurgency.

Horrifying images from the March 24 massacre showed bodies scattered across roads and people fleeing from the slaughter.

Regional leaders from countries including South Africa, Zimbabwe and Botswana met in Mozambique’s capital Maputo on Thursday to consider a response to the latest bout of violence.

‘The mission will come to assess the dimensions of the threat and to see what means to employ, so that these means are proportionate,’ she said.

A communique issued after Thursday’s meeting referred to a ‘technical deployment’ to Mozambique and said further meetings of regional bloc SADC would be convened.

The government has said dozens died in the latest assault that began on March 24, and aid groups believe tens of thousands have been displaced.

But the full scale of the casualties and displacement remains unclear.

National police spokesman Orlando Mudumane said he could not confirm details of the most-recent attack – but said they were investigating.

The army claims Palma is now secure, after soldiers cleared one final part of the town.

On Monday, previously-unseen pictures of the March 24 attack in Palma were released.

In shocking pictures obtained by Sky News, the scale and violence of the attack by the Islamic State-affiliated local al-Shabaab group is becoming more clear.

The aerial footage shows corpses of those brutally murdered by the insurgents after being pulled from their lorries by the killers in the African nation.

Smoke is shown rising from the town’s buildings after the ISIS militants rampaged through its streets, killing people that crossed their path.

People can be seen running towards rescue helicopters as they desperately flee the key industrial town that was overrun by an estimated 100 fighters.

One picture, taken from the air, shows people hoping to be rescued stand by ‘Help’ and ‘SOS’ written in stones and white bed sheets on the ground.

According to eyewitness reports, the gunmen ruthlessly attacked nearby villages before their main assault on Palma, and even ambushed a convoy of foreigners trying to escape the violence.

Thousands have fled the town of some 75,000 people where dozens were killed, according to an early government toll, and French energy giant Total has abandoned a site where a multi-billion-dollar gas project is under way.

Bulama Bukarti, a sub-Saharan terror analyst with the Tony Blair Institute for Global Change, told The Guardian that the March 24 attack was the first time foreign nationals had been targeted by the ISIS-backed group.

He also noted the sophistication of the attack – with the insurgents targeting banks and warehouses for food and money – mimicked actions seen by other Islamist groups in Africa.

It is believed that the insurgents infiltrated the town before launching an attack from the inside.

A ship, believed to be carrying supplies, was grounded on the shore near the town and used by the insurgents to re-stock as the attack continued.

A body matching the description of missing Briton Mr Mawer was found on Thursday last week, according to his employers.

In a statement on behalf of his family, RA International said: ‘It appears that Philip died while trying to escape from the siege by ISIS-linked insurgents of the Amarula Hotel.’ 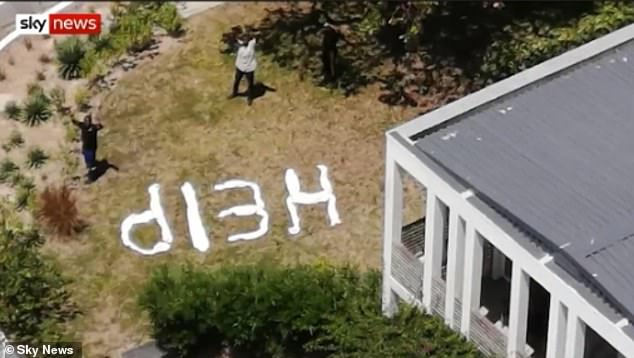 One picture, taken from the air, shows people hoping to be rescued having spelled out ‘Help’ and ‘SOS’ with stones and white bed sheets as the insurgents made their way through the town

Mawer, a contractor from Somerset, had not been seen or heard from since gunmen ambushed a convoy of vehicles fleeing a hotel.

His family described him as a ‘much-loved son, brother, uncle and friend’ while RA international called him ‘an ebullient, outgoing character’.

Mercenary pilots recovered the body from the wreckage of a car destroyed in the attack, according to The Times.

The mercenaries, from the Dyck Advisory Group (DAG), handed over the body to the SAS soldiers after recovering it from a 4×4 which had been spotted on Monday.

A decision was made in London for the SAS soldiers not to search the destroyed vehicle themselves, so the mercenary pilots conducted the search instead.

His family said in a statement: ‘It was the nature of his chosen line of work to be in the more dangerous corners of the world and Philip’s career had previously taken him to Somalia, Sierra Leone, Algeria, Afghanistan and Yemen.

‘His ability to get things done in the most hostile of environments made him a valued colleague.

‘Earlier in his life, Philip overcame a period of compulsive gambling and went on to write the book Overcoming Problem Gambling: A Guide For Problem And Compulsive Gamblers, using his personal experience to help others to overcome this destructive addiction.

‘He would often receive letters of thanks from people helped by the book.’