As Federal Health Minister Greg Hunt praised South Australia’s "model" response to a family-based cluster in Adelaide’s north, business leaders urged the states to back their capacity to trace and contain new outbreaks instead of resorting to the "blunt weapon" of border closures. 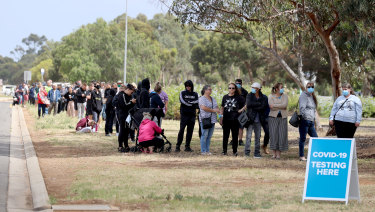 Despite this, Western Australia has resealed its eastern border and Queensland, Tasmania and the Northern Territory are requiring all passengers arriving from South Australia to quarantine for 14 days.

Australian Industry Group chief executive Innes Willox said the uncertainty of ad hoc border policies was bad for business investment and the national recovery. He urged the Morrison government to "knock heads together" until a national agreement was reached.

“The framework for federation is falling apart before our eyes and it seems to be every state for themselves," he told The Age and The Sydney Morning Herald. “It has proved that all those words about being open for Christmas are pretty much meaningless."

Business Council chief executive Jennifer Westacott said local outbreaks were expected and states should trust the systems they have developed to manage and contain the spread of the virus. 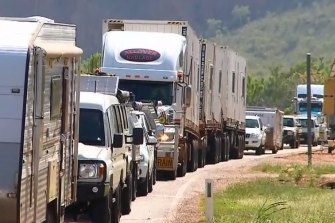 Hundreds of cars line up at the WA-NT border. Credit:Nine News Perth

“Border closures were a blunt weapon we needed at the beginning of the pandemic to keep people safe but we can’t keep closing them every time there is an outbreak,’’ she said.

Adelaide jeweller Albert Bensimon was on a Qantas flight from Adelaide to Perth when West Australian Premier Mark McGowan announced a resumption of quarantine for South Australian travellers. Mr Bensimon flew home the next morning as Mr McGowan closed the border.

“All the states have made a big point of making sure they have good contact tracing in place,’’ Mr Bensimon said. “If that is the case it is a bit of an overreaction to close the state every time there is an outbreak. They have to be more moderate and not have such a state-based mentality. We are not playing football here."

Mr McGowan was unapologetic. He is the only state or territory leader who has not committed, in principle, to reopening Australia's internal borders by Christmas. “I just want to be really clear with people, if we need to put up a hard border to the entire country we will," he told the ABC on Monday. 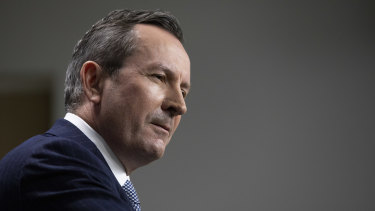 WA Premier Mark McGowan has taken a hardline approach to his state;s borders.Credit:Getty

Queensland Health Minister Yvette D’Ath said the rapid escalation of the South Australian outbreak meant her state would not “take any chances".

Australia's COVID border politics are plagued by competing definitions of what constitutes COVID hot spots or high risk areas and an absence of agreement about how states should respond to them.

Although NSW and Victoria support open borders, all states reserve the right to make border and quarantine decisions according to their own public health advice. The border between NSW and Victorian is scheduled to open on Sunday, as Victoria continues to emerge from COVID restrictions. Queensland border controls remain in place for Victoria and metropolitan Sydney.

University of Melbourne epidemiologist James McCaw said South Australia's response to the Parafield outbreak was “incredibly encouraging," with contact tracers quickly establishing links to all new cases. "This is a serious situation but it is one in which the links have been made early. That gives the public health authorities every chance to get ahead of this and shut it down".

Mr Hunt said South Australia had put itself in an “extremely strong position" to contain the outbreak. “South Australia’s response is a model of early intervention," he said.

“Our message to the other states is please look at the results in SA, please make sure that your response proportionate."