London: Boris Johnson has pledged to approve up to eight new nuclear power plants in the next eight years as Britain seeks to end dependence on foreign oil and gas, dramatically cut its emissions and lower household energy costs.

The British Prime Minister, one of the world’s most vocal advocates for leading economies to hit net zero by 2050, says his government’s energy security strategy would end “blackmail” by autocrats such as Vladimir Putin, while protecting households against global price spikes by generating more power at home. 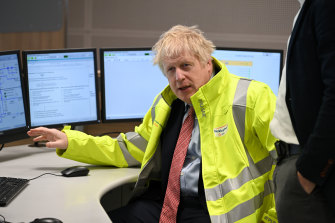 The strategy was released on Thursday evening (AEST) against a backdrop of Western nations wrestling with high-energy prices and considering how to reduce reliance on Russian oil and gas. It comes amid wider calls to end the fossil fuel era to tackle the threat of climate change.

French President Emmanuel Macron, seeking re-election this month, has announced a “renaissance” for the French nuclear industry with a program to build as many as 14 new reactors, arguing that it would help end the country’s reliance on fossil fuels and make France carbon-neutral by 2050.

Britain’s new plan will put offshore wind and nuclear power at the centre of its future supply and aim to produce 95 per cent of electricity from low-carbon sources by 2030. He said the “safe, clean, affordable new generation of nuclear reactors”, would take the UK back to pre-eminence in a field where it once led the world.

Planning laws will be changed to allow more solar panels on roofs and in fields while approvals for offshore wind farms will be cut to one year, compared with up to 10 currently. 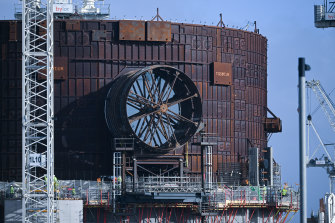 But a backlash from rural MPs forced Johnson to retreat from ambitions of tripling onshore wind capacity because his colleagues branded them “eyesore” that “sit on the hills” and create “problems of noise”.

Johnson said the strategy was about “tackling the mistakes of the past and making sure that we are set well for the future”.

The process of creating nuclear electricity does not result in greenhouse gas emissions but does produce hazardous radioactive waste that needs to be stored. Support for nuclear power is divided even within climate and environmental groups, but retains bipartisan support in England.

In Scotland, however, it is bitterly opposed, with its energy secretary Michael Matheson calling for renewables to fill the gap in supplying energy for homes and businesses. He accused the Conservative government of being “wrapped up in the nuclear lobby”.

Britain’s first nuclear power station in a generation, Hinkley Point C, is currently under construction but is not expected to be finished until at least 2026. The country has a poor recent record on delivering such projects, which can take over a decade to build. The Blair Labour government set out plans for a new generation of reactors in 2006.

The European Union depends on nuclear power for one-quarter of its electricity and a higher proportion of base-load power. There are 103 nuclear power reactors operating in 13 nations across the 27-nation bloc, providing half of all low-carbon electricity.

Energy experts have warned that while a substantial degree of transmission infrastructure exists in western Europe, much more investment is needed.

A new body, called Great British Nuclear, will be launched to bolster the UK’s nuclear capacity, with the hope that by 2050 up to 24 GW of electricity will come from that source – 25 per cent of the projected electricity demand.

The focus on nuclear power could deliver up to eight new reactors to be built on existing sites. The UK has eight designated nuclear sites in Hinkley, Sizewell, Heysham, Hartlepool, Bradwell, Wylfa, Oldbury and Moorside. North Sea gas projects will also be speeded up to provide a stopgap until green schemes come online.

There was media speculation earlier this week that the government could offer families living near new nuclear plants electricity free of charge. Britain will also collaborate with other countries to accelerate work on advanced nuclear technologies, including both small-scale modular reactors and advanced modular reactors.

Greenpeace UK, commenting on the plan, said there was no way new plants could be ready in time to solve the climate crisis and high price of energy.

A recent nuclear project in Finland has faced huge construction delays, and is only expected to begin energy production in July.

In 2005, when construction began, Finland was the first western European country in 15 years to have ordered a nuclear reactor. It was supposed to be ready by 2010 and cost more than $6 billion.

The only other current nuclear project in Britain, Sizewell C, will only be ready to generate by 2034, if there are no future delays.

“Nuclear Energy is not the solution to our climate crisis, and will make our bills soar,” Caroline Jones, a campaigner at Greenpeace UK, said.

Get a note directly from our foreign correspondents on what’s making headlines around the world. Sign up for the weekly What in the World newsletter here.