Boris Johnson warned workers that it was ‘inevitable’ there would be widespread job losses because of the coronavirus lockdown today.

The Prime Minister said that few countries around the world has done as much to put ‘our arms around workers’ as he led the daily Downing Street press conference.

And he pledged to follow the furlough and business loan schemes that have ploughed hundreds of billions of pounds into keeping firms afloat and preventing people being laid off.

He insisted that he would lead an ‘activist and interventionist’ Government that would seek to invest the UK back to health.

Figures last month revealed that the number of people claiming employment benefits has soared by a record 856,500 to 2.1million in the first full month of the coronavirus lockdown – despite the furlough scheme keeping millions formally in work.

Asked about the bouncebackability of the economy tonight, Mr Johnson said: ‘I am afraid tragically there will be many many job losses and that is just inevitable because of the effect of this virus on the economy and because of the shutdown that has taken place.

‘All I can say it that in dealing with that, that fallout from coronavirus, we will be as activist and interventionist as we have been throughout the lockdown. 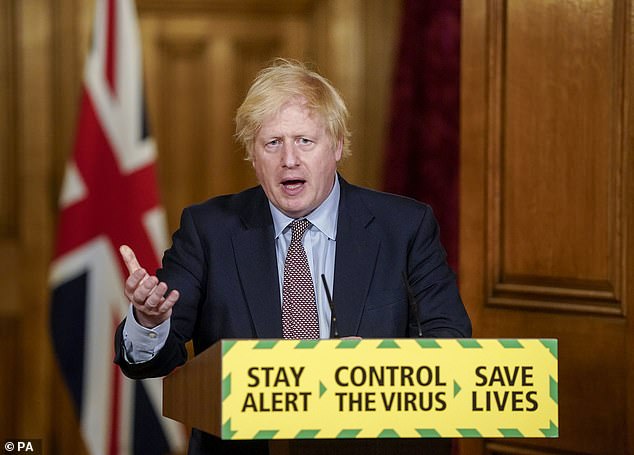 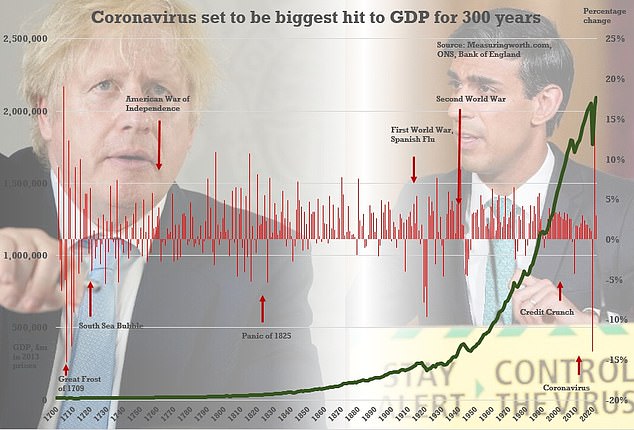 ‘There is no other country in the world that has done as much or few others that have done as much as the UK in terms of putting our arms around workers with the furlough scheme, looking after companies that have run into difficulties, helping in any way that we can.

‘We will be just an interventionist in the next phase, investing in the UK economy, investing in infrastructure, taking our country forward so we bounce back as sharply and decisively as we can.’

He said he believed it was ‘vital’ to ensure young people who were likely to be the hardest hit were guaranteed apprenticeships.

‘Young people in particular I believe should be guaranteed an apprenticeship,’ he said.

It came as a trio of former chancellors urged Chancellor Rishi Sunak to cut taxes during the economic recovery from coronavirus – which they suggested could last for two years.

Philip Hammond, George Osborne and Alistair Darling suggested there is little economic ‘logic’ to hiking taxes at this stage despite soaring government borrowing and debt.

Instead they proposed cuts to get the economy moving, with VAT and national insurance the favoured options.

Giving evidence to the Treasury Select Committee, the ex-Cabinet ministers also warned that even if GDP bounces back fairly quickly from the crisis, unemployment is set to soar.

‘That is going to bring social challenges and economic challenges for this government,’ Mr Osborne said. 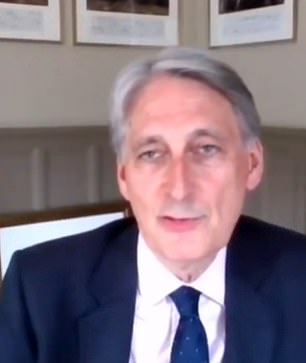 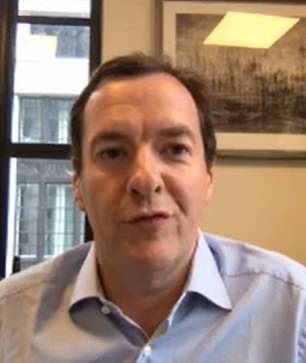 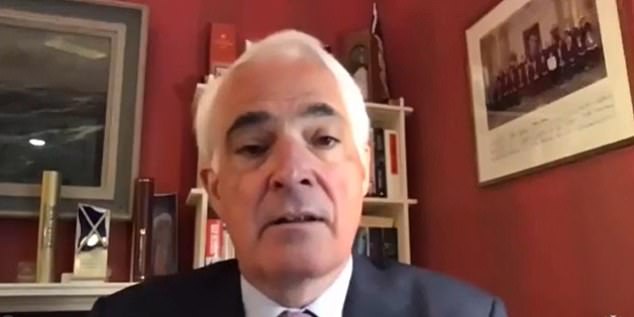 Lord Darling (pictured) insisted that the current recession was ‘very different’ to the credit crunch. ‘This one in my view is much more serious,’ he said

He said realistically the country was going to be poorer, and in the longer term would have to choose between either more tax or lower public spending.

Mr Hammond, chancellor under Theresa May, said he would not be ‘comfortable’ with a situation where the deficit was permanently high.

But he said there would be a recovery phase over ‘the next two years where the debt as a proportion of GDP is not the primary concern’.

Last week Mr Sunak announced that furloughed staff will be allowed to return to work on a part-time basis from July – a month earlier than originally planned.

The Chancellor said firms will soon be able to take advantage of what he described as ‘flexible furlough’ which will enable employees to return as long as companies pick up a percentage of their salary equivalent to the hours they work.

He said businesses must start to share the wage burden from August before the initiative is finally brought to an end in October.

However, the proportion they will be asked to contribute will be tapered up to a maximum of 20 per cent over the three month period.

After an outcry from Tory MPs, he also announced an extension to separate support for the self-employed – with grants continuing until August, but slightly scaled back.

As the cost of the bailouts soar, Mr Sunak is desperately trying to balance the need to wean companies off government money with keeping the economy on life support during lockdown.

The furlough scheme currently covers 80 per cent of pay for employees, up to a ceiling of £2,500 a month. Some 8.4million jobs are currently being propped up, to a total value so far of £15billion.