Boris Johnson promises a ‘fitting and permanent’ memorial to 126,000 Britons killed by coronavirus as he faces the country on the first anniversary of Britain entering lockdown

Boris Johnson threw his backing behind an official memorial to the UK’s thousands of Covid dead tonight.

As he fronted a press conference on the first anniversary of the UK lockdown the Prime Minister promised a ‘fitting and permanent’ commemoration.

He said that the ‘whole period’ will be commemorated ‘at the right moment’, along with the 126,000 people killed buy the deadly disease in the UK over the past year.

Addressing the brutal impact of the pandemic on Britain, he told the press conference: ‘For month after month, our collective fight against coronavirus was like fighting in the dark against a callous and invisible enemy until science helped us to turn the lights on and gain the upper hand.’ 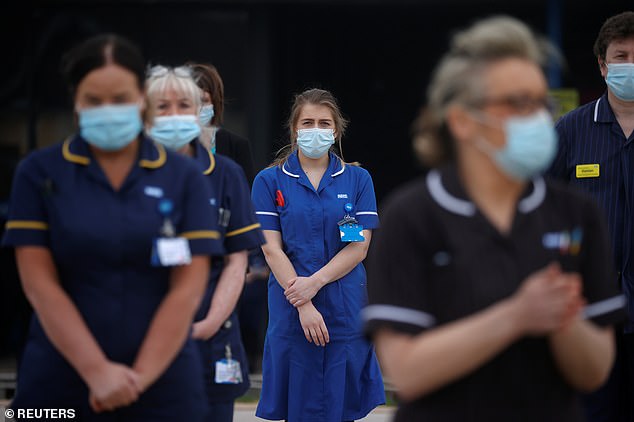 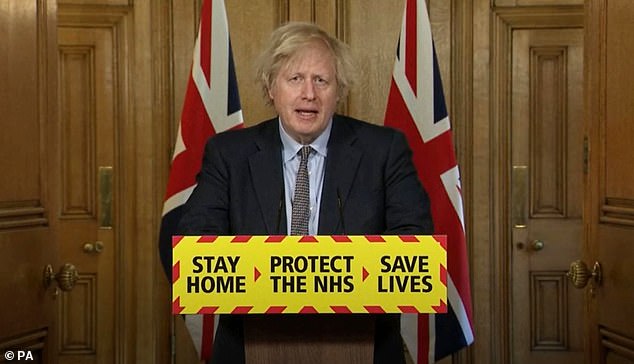 As he fronted a press conference on the first anniversary of the UK lockdown the Prime Minister promised a ‘fitting and permanent’ commemoration.

Mr Johnson has said the nation is ‘step by step, jab by jab’ on the path to ‘reclaiming our freedoms’.

He told the Downing Street press conference: ‘It’s thanks to all of you therefore that we can continue on our road map to freedom.

‘And cautiously but irreversibly, step by step, jab by jab, this country is on the path to reclaiming our freedoms.’

It came as doctors, teachers and nurses today urged Boris Johnson to formally recognise an annual ‘Covid Memorial Day’ and erect a monument on Whitehall.

More than 50 MPs and peers along with the health unions, the British Medical Association and the Royal College of Nursing are backing the calls.

There is also a cross-party campaign for a minute’s silence every year on March 23 to remember the lives lost on the anniversary of the first UK-wide lockdown.

Schools, workplaces and public venues would hold a silence at noon every year so that people can pay tribute to the efforts of frontline workers during the pandemic.

Wreaths would also be laid under the plans at a new coronavirus memorial monument on Whitehall in London, which is also where The Cenotaph is located.

There are already plans for Covid memorials in other parts of the country, including Barnsley in South Yorkshire.

In a letter to the Prime Minister, MPs said the nation ‘must remember the lives lost and lives changed with dignity, and commemorate the efforts of our frontline and key workers with pride’.

MPs and peers, including Tory MP Dr Dan Poulter, signed the letter organised by Layla Moran, the MP who chairs the all-party parliamentary group on coronavirus. 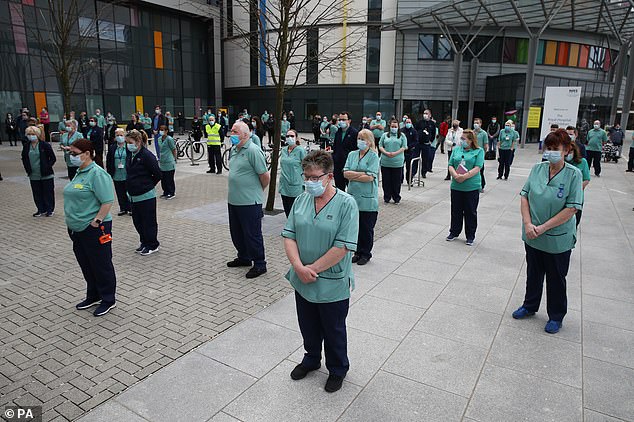 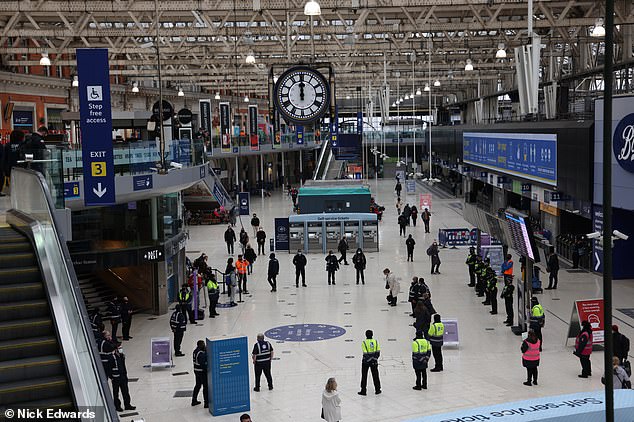 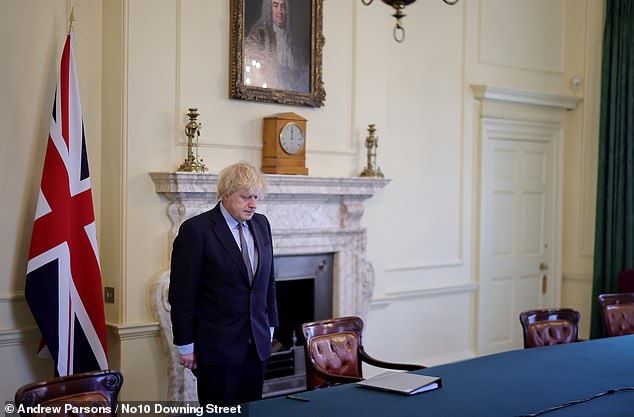 Mr Johnson today led Britain in mourning the victims of coronavirus during a minute’s silence.

The Prime Minister, who was almost killed by Covid-19 last year, paid a solemn tribute to the 126,172 dead in the Cabinet room of No10 at noon.

Ahead of tonight’s ptress conference  of fronting a Downing Street briefing tonight, he offered his ‘sincere condolences to those who have lost loved ones.’

The Queen and also marked the occasion, releasing a rare statement honoring the victims of the pandemic, while Prince Charles summoned the nation to ‘remember the lives tragically cut short’.

The monarch said: ‘As we look forward to a brighter future together, today we pause to reflect on the grief and loss that continues to be felt by so many people and families, and pay tribute to the immeasurable service of those who have supported us all over the last year.’

She sent a bouquet of irises, tulips, mixed narcissi and ranunculus with the message to St Bartholomew’s Hospital in London, where her husband Prince Philip had a heart operation earlier this month, from Windsor Castle.

And tonight Britons are being encouraged to stand on their doorsteps at 8pm and light candles as a ‘beacon of remembrance’ for those who have lost their lives.