Boy miraculously survives after a steel rod rammed into his head

A toddler in China has cheated death after a steel rod speared the boy’s skull from the back of his head during an accident.

The one-year-old was playing outside when he suddenly slipped and fell backwards before landing on a metal bar protruding from a manhole cover, his father said.

The young patient is said to be in stable condition after doctors performed a one-hour operation to remove the pole. 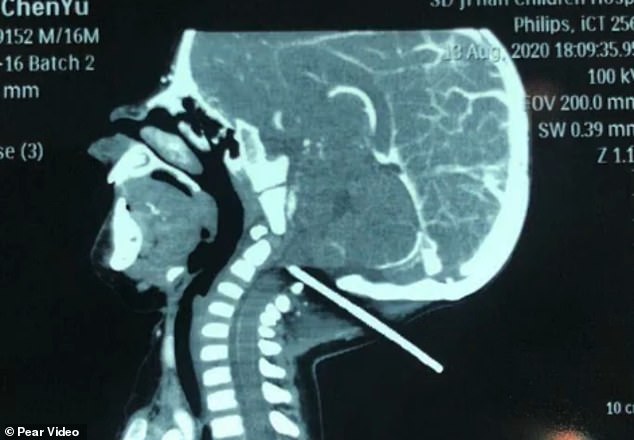 The one-year-old was playing outside when he suddenly slipped and fell backwards before landing on a metal bar protruding from a manhole cover, his father said. The picture shows an X-ray image of the young patient after the metal bar rammed into his skull during an accident

The terrifying incident was brought to light when the boy was rushed to a hospital in Jinan city of Shandong province on Thursday.

The father said that his son had been playing outside before suddenly slipping on a wet road and falling backwards.

‘I ran over to check on him,’ the parent told Pear Video. ‘[I thought] it was not good because it had rammed into [his head].’

The horrified father cut the steel rod off the manhole cover with a pair of pliers and took his son to a local hospital.

Dr Wang Guangning, director of neurosurgery at Jinan Children’s Hospital, said that the toddler had been critical condition when he was brought in.

‘The child was struggling to stay awake when he was brought in,’ the medic said. ‘He also had a fever.’

After examining the boy’s injury with a CT scan, doctors found that the metal stick had been about five millimetres (0.2 inches) away from puncturing the young patient’s blood vessels.

During an hour-long emergency operation, surgeons successfully removed the pole from the toddler’s head with the help of a microscope.

The young patient is said to have been in stable condition while being treated at the Jinan hospital.