Shocking moment brave delivery drivers try to stop vicious mob storming a McDonald’s only to be punched, beaten with shoes and even whacked with a CRUTCH

This is the shocking moment two delivery drivers get beaten and one whacked with a crutch whilst trying to stop a screaming mob from storming a McDonald’s branch.

The chaotic video initially shows a pair of girls and a man shouting and calling staff members ‘d***head’ as they are forced to leave the McDonald’s on Kilburn High Road in north London on Saturday.

One of the girls continually screams: ‘You’re a d***head bruv, that’s what you get.’

One of the gang then hurls a milkshake at an employee seemingly helping a customer whilst being dragged out by a security guard.

Shaken workers can be seen clinging onto each other. It is not known why they were being ejected from the restaurant.

The clip then cuts to outside where the hysterical gang can be seen continuing to hurl abuse and trying to get back into the restaurant as two delivery drivers step in.

The mob then attack the drivers, pushing them against the glass doors and one woman attacks them with a shoe.

They scream at them “Don’t f*cking touch her!” as they wrestle with the men and steal one delivery rider’s cap.

Another woman smacks a driver over the head with her crutch and a man punches him violently in the face before he retreats to safety inside.

The aggressive mob only stops attacking after being separated from one of the drivers by the McDonald’s door, but they continue to scream as a second brave delivery driver tries to calm the situation. 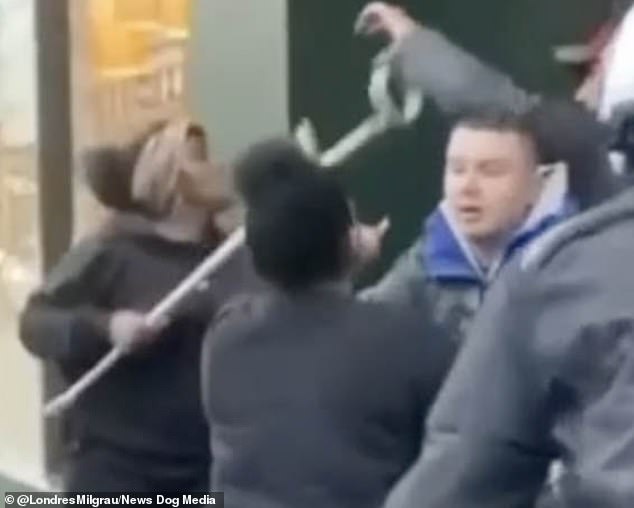 One woman can be seen whacking a delivery driver over the head with her crutch. The brawl happened at a McDonald’s in Kilburn High Street 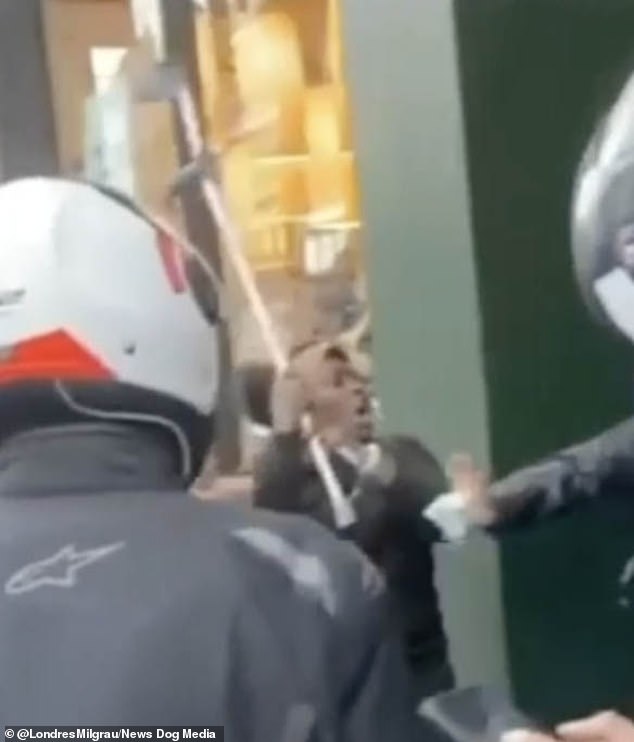 Other delivery drivers are seen watching the melee.

A witness said the incident happened after 3pm after the group were asked to leave the restaurant. One of the drivers was treated by paramedics at the scene for a head injury.

A spokesperson for London Metropolitan Police said: ‘Police were called at 19:38 on Saturday, 15 May to reports of a disturbance involving a group of people at a commercial property in Kilburn High Road, NW6.

‘Officers attended along with London Ambulance Service and one person was treated for a head injury.

‘Their condition is not considered life-threatening. Enquiries into the circumstances are ongoing.’