Brazil is facing 'economic collapse' due to its coronavirus lockdown

Brazil is facing ‘economic collapse’ due to its coronavirus lockdown – opposed by President Bolsonaro – the economy minister has warned.

Paulo Guedes cautioned yesterday that business leaders are telling him there is a danger production may seize up, leading to food shortages.

Brazil, Latin America’s biggest economy, is the epicenter of the coronavirus pandemic in the region.

But far-right President Jair Bolsonaro opposes stay-at-home measures to slow the virus, saying they are unnecessarily damaging the economy. 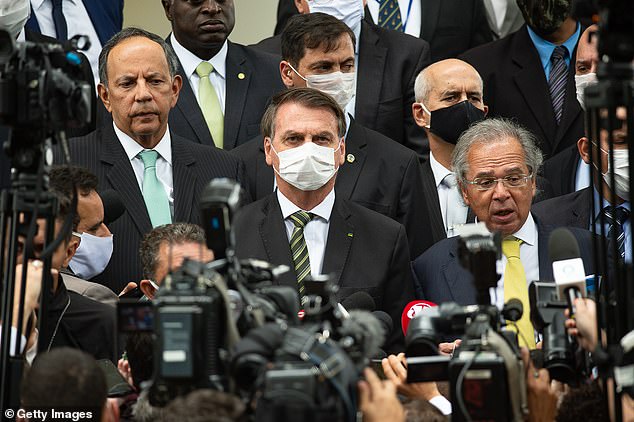 ‘Within about 30 days, there may start to be shortages on store shelves and production may become disorganized, leading to a system of economic collapse, of social disorder,’ Guedes said.

‘This is a serious alert.’

Bolsonaro, who has compared the new coronavirus to a ‘little flu,’ said he understood ‘the virus problem’ and believed that ‘we must save lives.’

‘But there is a problem that’s worrying us more and more… and that’s the issue of jobs, of the stalled economy,’ Bolsonaro added. 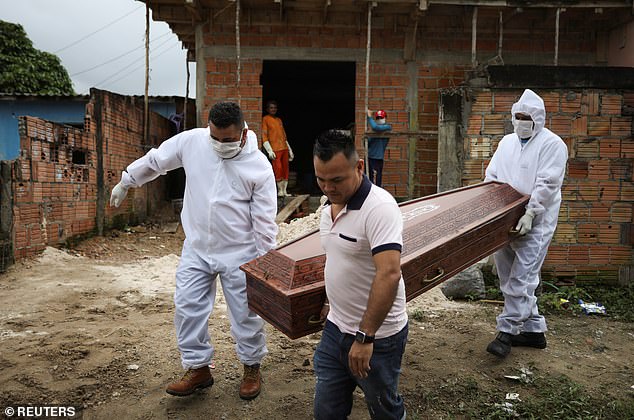 Brazil has been hit hard by the pandemic, with more than 135,000 cases and 9,146 deaths. Pictured: funeral workers carry a coffin in Manaus, Brazil yesterday

‘Fighting the virus shouldn’t do more damage than the virus itself.’

Bolsonaro regularly flouts social distancing measures, hitting the streets in Brasilia and working the crowd in close quarters at rallies of his supporters.

Bolsonaro and Guedes made the comments after paying an unscheduled visit to the chief justice of the Supreme Court, Dias Toffoli.

The court recently decided that state and local authorities have the right to determine what social distancing measures to take to contain the spread of the virus, ruling against Bolsonaro’s government, which wants to lift many of the regulations. 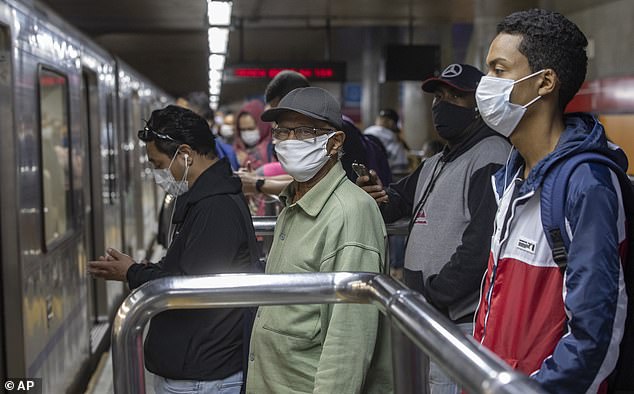 Commuters wear face masks on the subway amid the spread of the new coronavirus in Sao Paulo, Brazil

Those figures have been climbing at an alarming rate. Experts say under-testing means the real numbers are likely far higher.

Hospitals are nearly out of intensive care beds in the hardest-hit areas, including Sao Paulo, Rio de Janeiro and Manaus, the biggest city in the Amazon region, which has had to turn to refrigerator trucks and mass graves to cope with the number of dead.

Because of the pandemic, Brazil – which was just coming out of a massive recession in 2015 and 2016 – is facing an economic contraction of 5.3 percent this year, the International Monetary Fund forecasts.

Bolsonaro won the election in 2018 and promised to jump-start the economy with austerity cuts, privatizations and fiscal reforms.

The pandemic now threatens to derail that project, battering the economy and forcing the government to undertake massive stimulus spending.