Bricklayers are fittest workers in UK burning 2,500 calories a day

Bricklayers are the fittest workers in Britain averaging burning 2,500 calories a day while IT workers are the unhealthiest notching up just 24 minutes of activity a day, study reveals

Bricklayers and builders are the fittest workers in Britain as they get eight hours a day of activity and burn off 2,500 calories on the job.

A survey of 2,000 workers from all around the UK found that bricklayers and builders were the most active, averaging eight hours of ‘activity’ – like lifting, shovelling and hammering – every day.

They burn on average 2,500 calories a day during work, compared to IT workers, who burn off a measly 120 calories-a-day by walking about the office – or walking to get lunch. 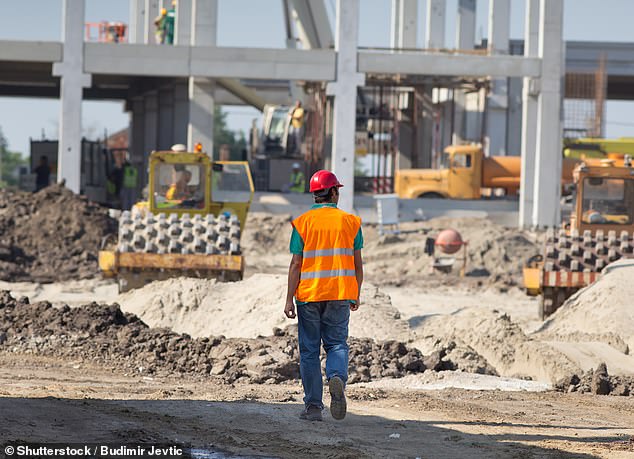 Bricklayers and builders are the fittest workers in Britain as they get eight hours a day of activity and burn off 2,500 calories on the job (stock picture)

The survey found that bricklayers and builders even beat personal trainers and health and fitness professionals, who notch up around five hours a day of ‘activity’, working off around 1,500 calories.

What are the most and least healthy jobs in the UK?

The healthiest hobs, judged by hours of activity per day

Personal trainers were equalled by farmers and followed by shop assistants, who do four hours of activity a day and burn 1,200 calories.

Factory workers came in fifth with an average of three hours of activity a day – burning 950 calories.

And the top five unhealthiest workers were those in IT, who only average 24 minutes of activity a day and burn 120 calories.

In fifth place came office-bound civil servants, who burn roughly 430 calories a day on the job.

Bricklayer Tony Pollard, 45, of Brighton, East Sussex, said he was active all day, adding: ‘From 8am until I knock off I’m pretty much all systems go the whole time.

‘I stop for a 30-minute lunch break, but other than that I’m up and down ladders, laying bricks and shovelling cement all day.’

A spokesman or Ironmongerydirect.co.uk, which conducted the study, said: ‘A balanced diet, regular breaks from your desk, tools or computer screen, fresh air, and moderate exercise are important.

‘Those with active jobs should ensure they are getting the correct levels of calories to avoid running out of fuel during busy days, while those with lower activity levels should also be conscious of what they eat.’