Britain is hoping to an end to damaging American tariffs on Scotch whisky by offering a post-Brexit olive-branch to the United States, it was announced last night.

UK trade chiefs hope to win over President-elect Joe Biden by lifting levies on American goods such as tractors, ketchup and orange juice when the Brexit transition period ends this month.

They hope the move will encourage the United States to scrap the 25 per cent duty it imposed on Scotch whisky in October last year – which has led to a huge drop in exports to America.

The tariffs were imposed as part of a longstanding trade conflicts between the European Union and the US over aerospace subsidies.

Speaking about the announcement last night, International Trade Secretary Liz Truss said: ‘As an independent trading nation once again, we finally have the ability to shape these tariffs to our interests and our economy, and to stand up for UK business.

Britain will attempt to put an end to damaging American tariffs on Scotch Whisky exports with a post-Brexit trade olive-branch to the United States, it was announced last night 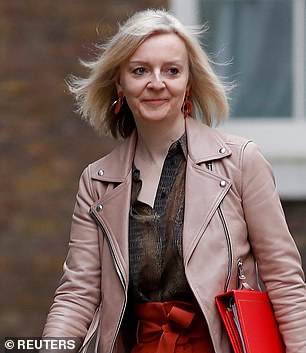 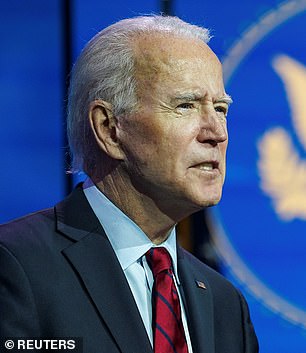 Speaking about the announcement last night, International Trade Secretary Liz Truss (pictured left) said Britain will ‘finally have the ability to shape these tariffs to our interests and our economy’ after the Brexit transition period was over. The move has been described by one source to the Times as Britain ‘showing a bit of leg’ to the US. Pictured right: US President-elect Joe Biden

‘Ultimately, we want to de-escalate the conflict and come to a negotiated settlement so we can deepen our trading relationship with the US and draw a line under all this.’

However Britain will maintain tariffs on goods such as bourbon, motorcycles and jeans, which were imposed after President Trump put duties on foreign steel and aluminium.

‘We are protecting our steel industry against illegal and unfair tariffs – and will continue to do so – but are also showing the US we are serious about ending a dispute that benefits neither country,’ Ms Truss added.

These tariffs will continue from January 1 , when the UK becomes an independent trading nation once again, the Department for International Trade said.

The department said it will launch a consultation to ensure these tariffs are shaped to UK interests and tailored to the UK economy.

But it said it will suspend tariffs first imposed following a dispute involving US and EU aerospace firms.

The 16-year dispute – involving Airbus and Boeing – began after the EU was found last year to have illegally subsidised Airbus.

The tariffs, worth £5.6billion, were met with retaliation tariffs from the EU, worth £3billion, on American exports such as aircraft and farm produce.

Those tariffs are the ones that will now be dropped by the UK in January, in a move described by one source to the Times as Britain ‘showing a bit of leg’ to the US. 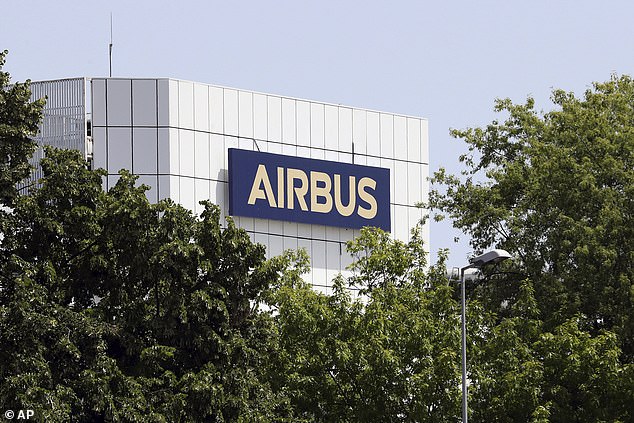 It is hoped the move will convince the United States to drop their tariffs for UK experts such as Scotch whisky.

Since the tariffs were introduced in October last year, exports of the alcohol – the world’s most internationally traded spirit – to the US have plunged by 30 per cent.

Speaking to the Times, Karen Betts, of the Scotch Whisky Association, welcomed a ‘very encouraging step’ by the UK.

She said: ‘We hope that this marks the beginning of the end of trade tensions with the US.’

The ‘initial step’ was also welcomed by Andy Burwell, director of international trade at the Confederation of British Industry.

Boris heads to Brussels: PM will try to revive talks stalled over sovereignty and fishing at meal with EU supremo Ursula von der Leyen as MPs order him to ‘grip your marbles tight’ as Michel Barnier says the chances of a Brexit deal are ‘very slim’

Boris Johnson will fly to Brussels tonight in a last-ditch bid to salvage a Brexit trade deal.

In a dramatic intervention, the Prime Minister will try to thrash out the framework of a deal over dinner with European Commission chief Ursula von der Leyen.

It comes on the eve of a crunch EU summit in the Belgian capital, which the bloc’s top negotiator Michel Barnier had said would mark the final deadline.

Mr Barnier warned the chances of a deal are ‘very slim’, but Mr Johnson yesterday offered a significant olive branch by agreeing to scrap controversial legislation that broke part of the original Brexit deal relating to Northern Ireland.

The EU had said it would not sign an agreement if the legislation remained. 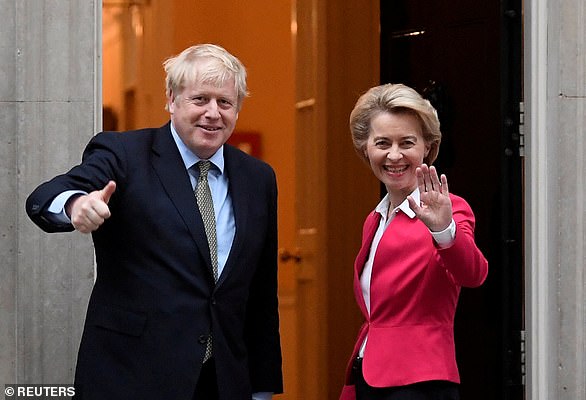 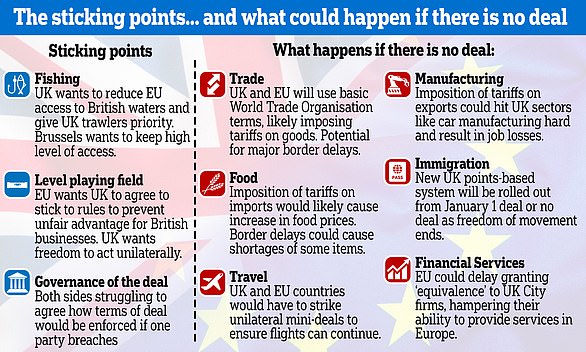 In another major concession the EU will be allowed to have officials stationed in Northern Ireland, a sticking point on which Britain had previously stood firm.

The DUP called it ‘unnecessary’ and ‘concerning’, while Brexiteers told The Daily Telegraph that they would be watching closely to see if Mr Johnson decides to cede further ground to Ms von der Leyen tonight.

But government sources said big gaps remained between the two sides on key issues – and warned that the PM could pull the plug on negotiations if no progress was made.

One source said the two sides were too far apart for a deal to be struck tonight. But Mr Johnson hopes the two leaders can identify a breakthrough which their negotiators can finalise in the following days.

‘The aim is to unlock things so they can give their teams the authority to keep going and finalise the issues,’ the source said.

‘But if they strike out and make no progress then that is going to be it – there is no point carrying on for the sake of it.’ 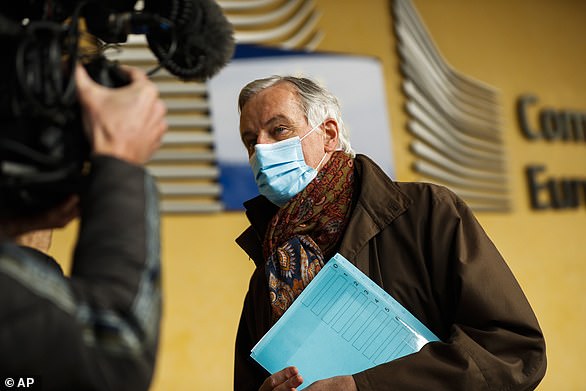 Mr Barnier told MEPs this week that today was the final deadline for a deal, as it had to be signed off by leaders at tomorrow’s EU summit 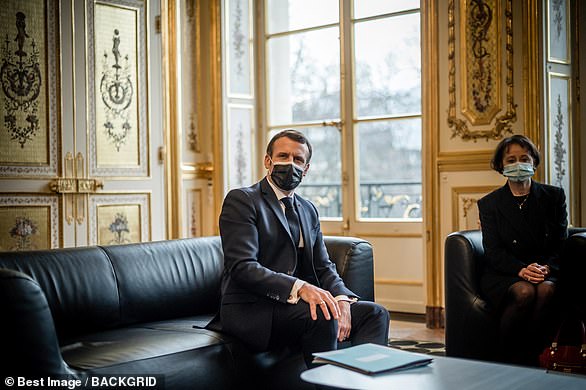 There are also fears French president Emmanuel Macron could use this week’s summit to grandstand on his opposition to a compromise, effectively wrecking hopes of a deal

One Cabinet minister said: ‘None of us really know what is going on. Is he going because he thinks there is a chance that he can return victorious with a piece of paper?

‘Or does he already know it’s probably No Deal and just wants to be seen to be doing everything he can?

‘Either way, it is entirely his call. Everyone wants a deal, but no-one is pushing him to take it at any price. It is down to his judgment.’

There are also fears French president Emmanuel Macron could use this week’s summit to grandstand on his opposition to a compromise, effectively wrecking hopes of a deal.

Downing Street blamed Mr Macron for torpedoing talks last week by pressuring Mr Barnier into toughening his stance just as progress was being made.

Two EU diplomats told the Mail that the chances of a Brexit deal were ‘now out of Barnier’s hands’.

Mr Johnson said the situation was ‘very tricky’ but he hoped the ‘power of sweet reason’ could still clinch an agreement in the final days before the Brexit transition ends this month.

He acknowledged there may be a point where it was ‘time to draw stumps’ and accept that a deal was impossible.

Talks have stalled on the vexed issues of fishing access and the UK’s right to set its own destiny without having to follow EU rules after Brexit.

The EU is prepared to accept only modest cuts to its fishing quotas and wants them phased in over ten years.

Brussels is also demanding that the UK compete on a so-called ‘level playing field’ in future.

Mr Johnson is willing to guarantee the UK will not lower existing standards in areas such as state aid subsidies, workers’ rights and the environment, but Brussels also now wants the UK to adopt future EU regulations, and is demanding the power to levy ‘lightning tariffs’ if we diverge – an idea No 10 says is unacceptable.

Mr Johnson said: ‘Our friends have just got to understand the UK has left the EU in order to be able to exercise democratic control over the way we do things.

‘There is also the issue of fisheries where we are a long way apart still. But hope springs eternal, I will do my best to sort it out if we can.’

Mr Barnier told MEPs this week that today was the final deadline for a deal, as it had to be signed off by leaders at tomorrow’s EU summit.

But the EU yesterday played down his comments, and suggested that talks could carry on until the end of this month – and possibly even into next year.

Downing Street said the UK was willing to continue talks for ‘as long as we have time available’ – but ruled out any extension into next year.

Tory Eurosceptics urged Mr Johnson not to back down on the UK’s red lines tonight.

In a message to the PM on Twitter, former party treasurer Lord Ashcroft said: ‘At dinner in Brussels, grip your marbles tight, pour lead in your pencil, don’t go wobbly and don’t cross your stated red lines… good fortune.’

‘We will never again allow our trade and regulatory policy to be dictated by other countries. A free trade agreement is one thing; subservience is another.