Britain will be battered by high winds with some areas seeing nearly a month’s rainfall in just a few hours today after ‘intense’ thunderstorms caused misery for thousands on Monday.

Parts of the Midlands around Birmingham have been issued with flood alerts while a yellow warning covering vast swathes of Scotland is in place between 1pm and 9pm.

The stormy conditions represent a dramatic turnaround from the extreme heatwave experienced in Britain up until last week which saw temperatures of at least 93F (34C) for six days in a row for the first time on record.

And the poor weather isn’t set to improve next week as the downpours will be replaced by high winds on Wednesday, as warm and tropical air pushes in from the south containing the remnants of Tropical Storm Kyle.

Forecasters are monitoring the storm which is set to bring strong winds gusting at up to 70mph to parts of Britain from tomorrow.

Met Office forecaster Greg Dewhurst said today will bring ‘sunshine and showers’ to England and Wales but warned the showers ‘could be heavy with thunder’. 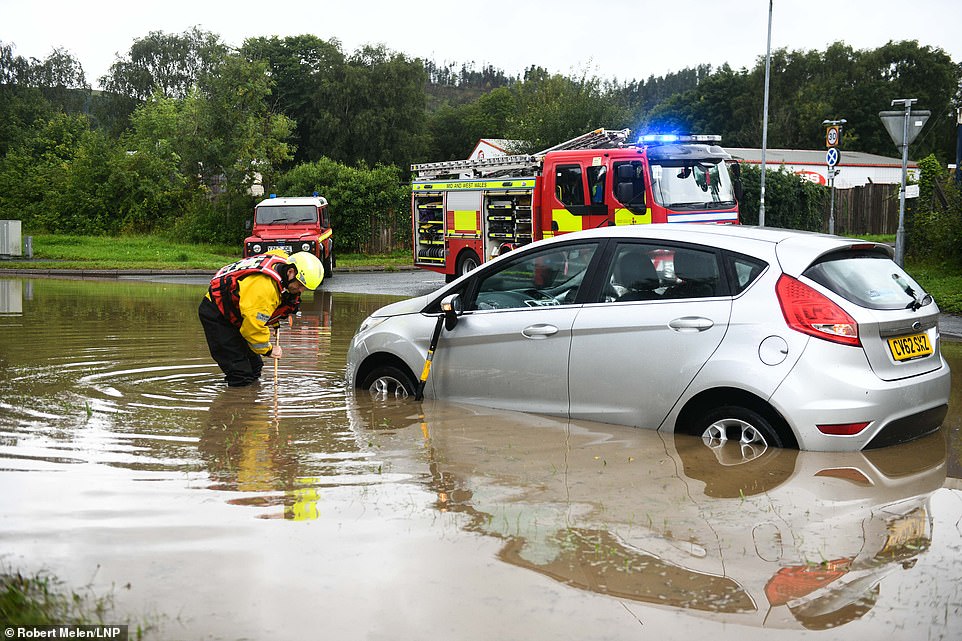 Emergency services and residents in Ystradgynlais in the Swansea Valley, Wales, battled flood water on Monday 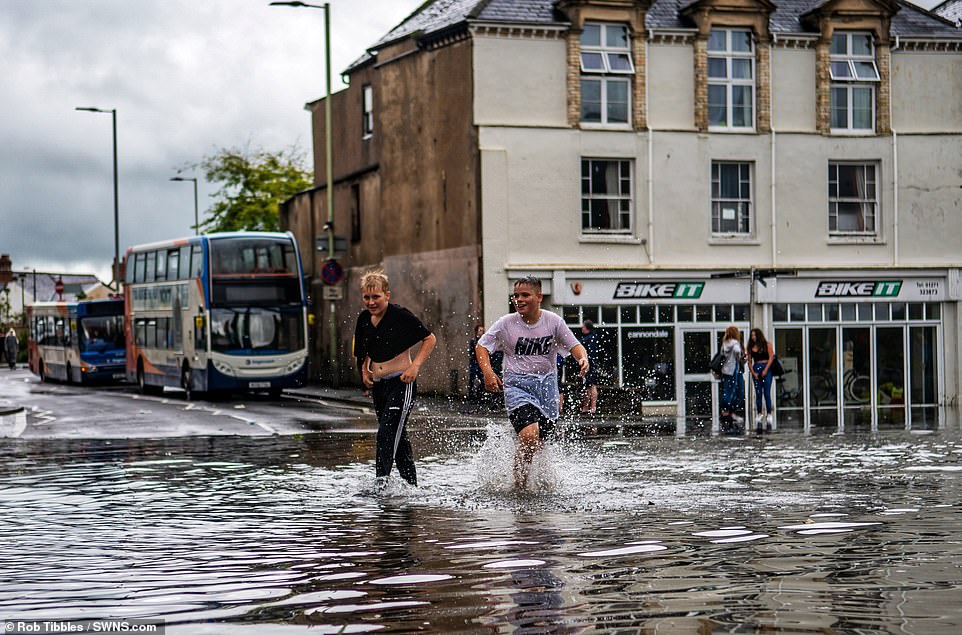 Some three feet of rain flooded Barnstaple, Devon (pictured), with residents saying the water came up to just below their windows 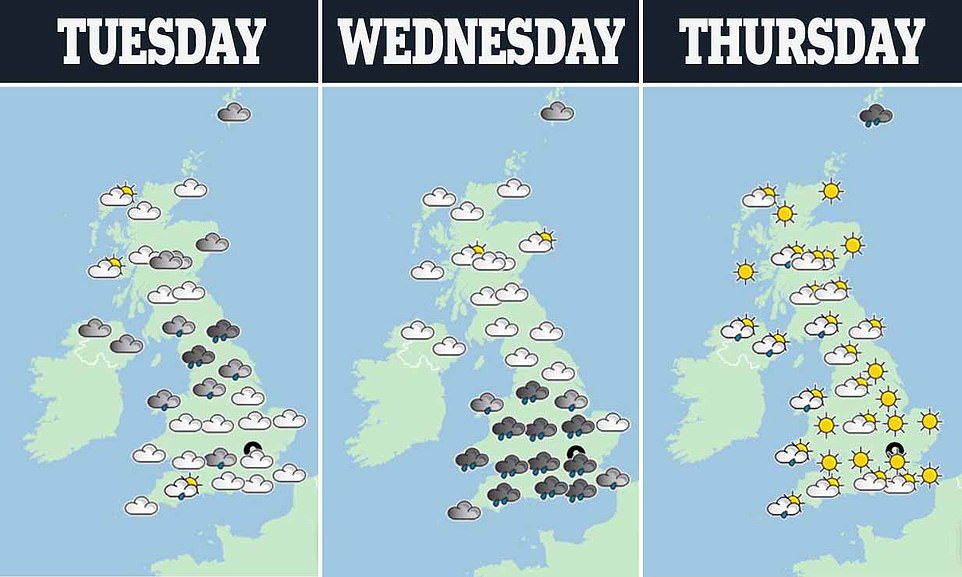 He added: ‘Overall the showers will probably be less frequent compared to the last few days and not quite as intense.’

Parts of Northern Ireland and Scotland are likely to record heavier showers. In Scotland, these showers were likely to ‘merge into spells of heavy rain,’ Mr Dewhurst said.

Tuesday’s top temperatures – most likely to be in the London area – are set to be around 25C.

It comes after yesterday’s thunderstorms brought devastating flash flooding to parts of the UK – with residents forced to seek emergency accommodation after their homes were filled with water in Ystradgynlais, Wales.

Some three feet of rain flooded one town in Devon with residents saying the water came up to just below their windows.

Mr Dewhurst described Monday’s thunderstorms as ‘heavy and torrential in places’, particularly across parts of the Midlands, East Anglia, south west England and parts of Wales. 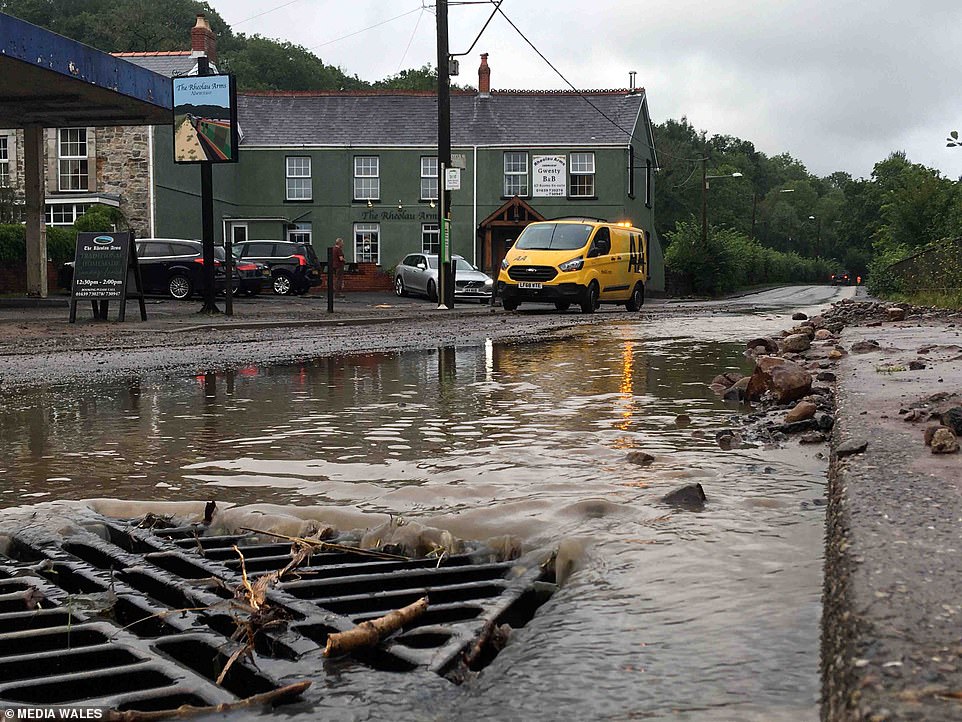 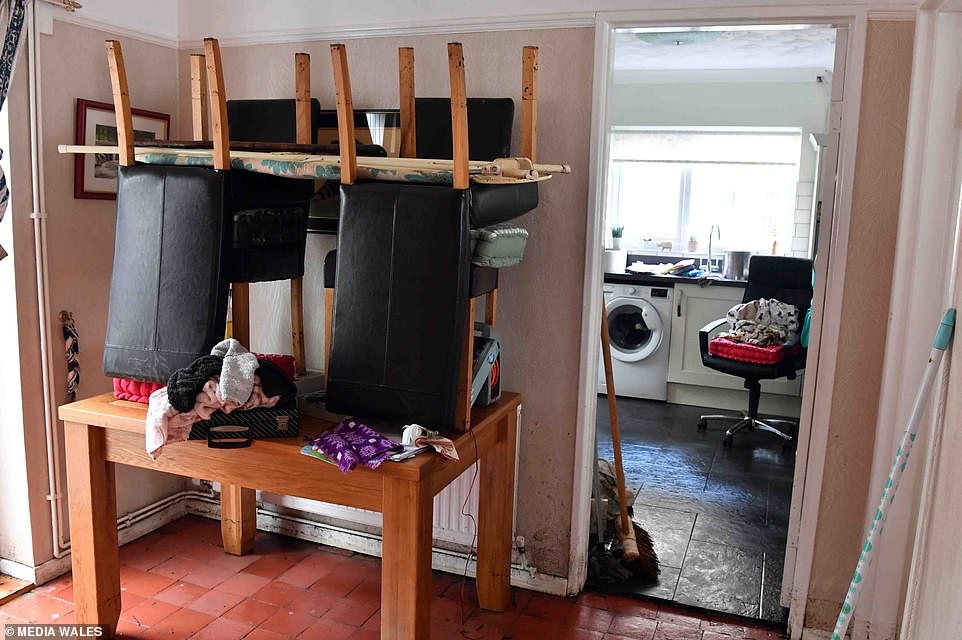 The freak downpour entirely submerged parts of the road and emergency services are still at the scene in Ystradgynlais today. Pictured: One family tried to protect their belongings when the flooding started 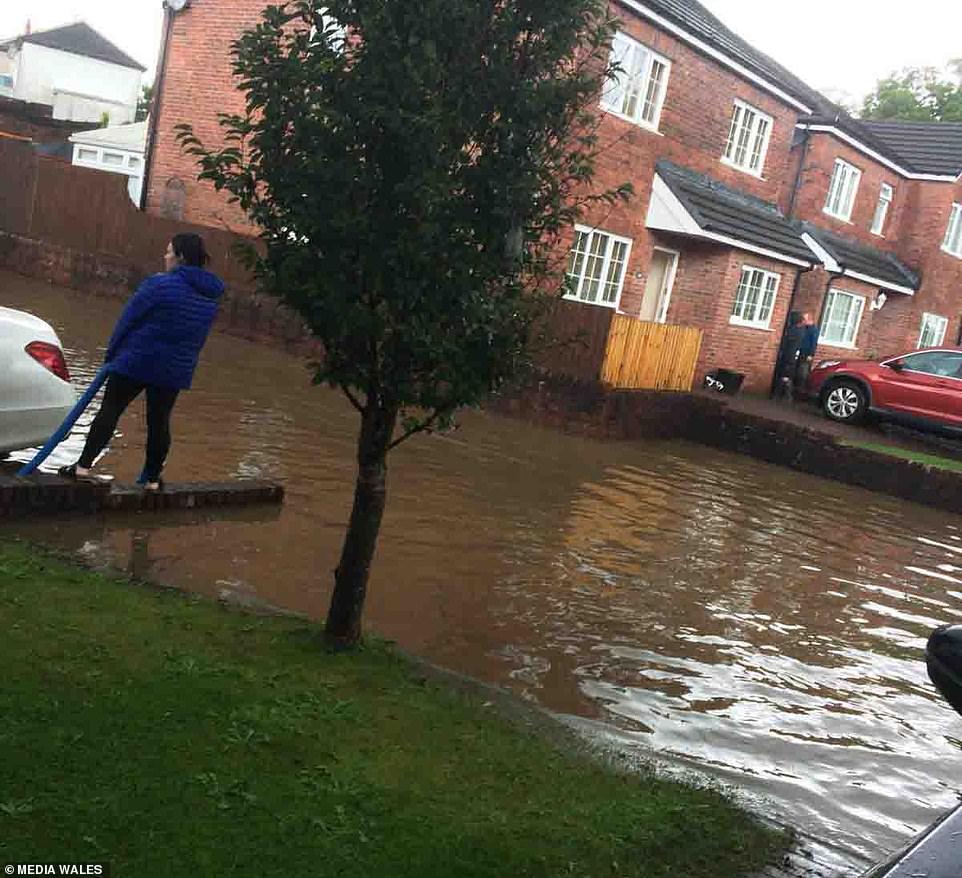 Many places had high rainfall totals on Monday including the 48mm recorded in Anglesey, Wales, the 43mm at High Beach, Essex, and 39mm in Wellesbourne, Warwickshire, while 27mm fell in Hawkridge, Somerset.

Mr Dewhurst said: ‘The highest rainfall totals were in quite widespread places and a lot of these totals fell in the space of an hour of two, so they had heavy downbursts in not very long periods of time.’

In Ystradgynlais – on the banks of the River Tawe – neighbours rushed to help each other when the water rushed in.

The freak downpour entirely submerged parts of the road and emergency services are still at the scene today.

A Mid and West Wales Fire and Rescue Service spokeswoman said: ‘We have still got crews at the scene. We have had several calls to the area, the first call we received was at 4:15pm.’

Katie Jones described scenes of devastation after a member of her family saw her home flooded.

She said: ‘She has just managed to get emergency accommodation now. All downstairs has been devastated, her neighbours have been amazing, they have come in and picked everything up and tried to save as much as they can but the carpet is gone.’ 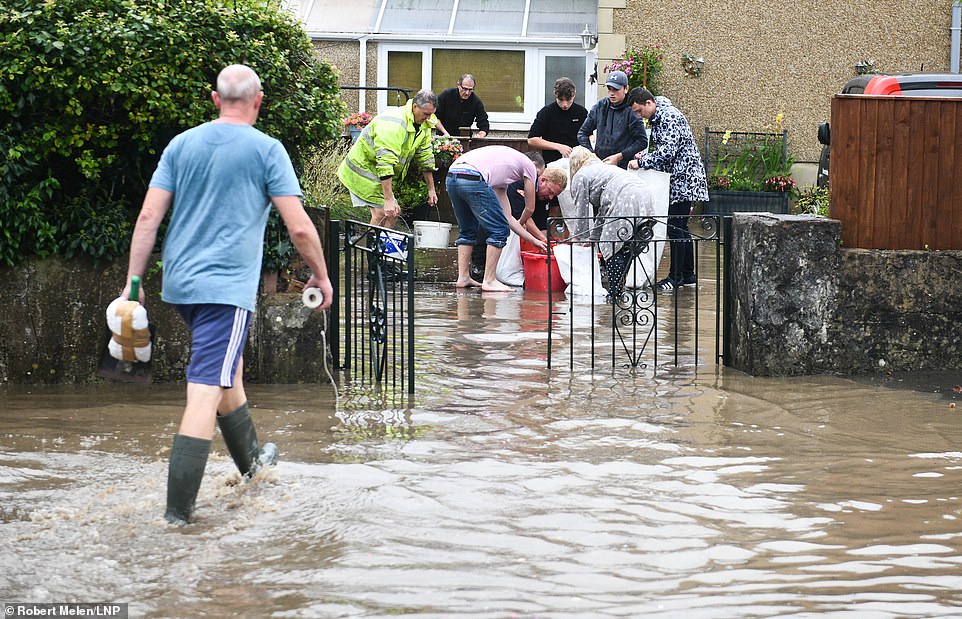 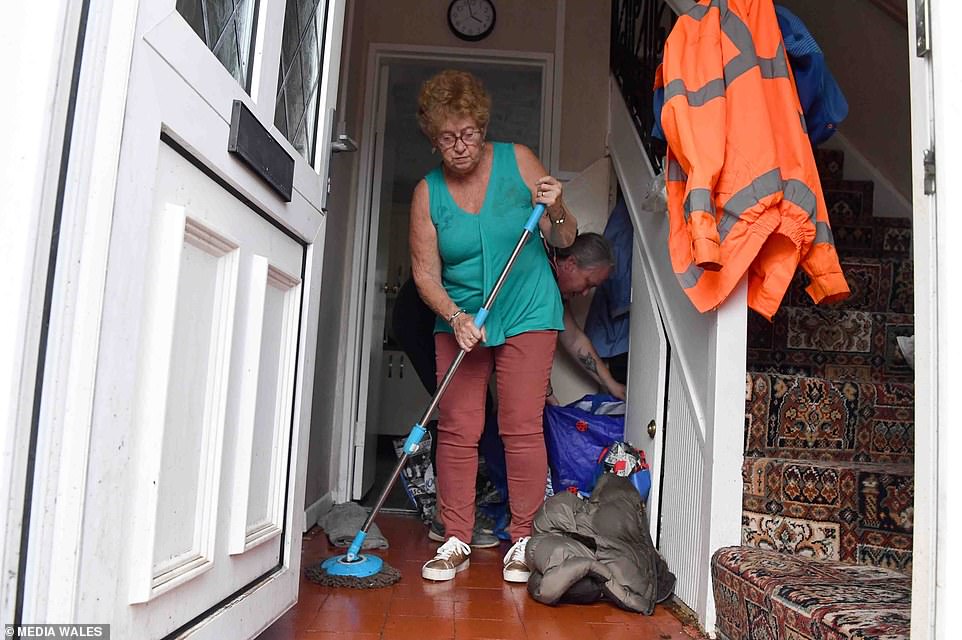 Residents were seen cleaning up in Ystradgynlais after the flooding yesterday. Met Office forecaster Greg Dewhurst described Monday’s thunderstorms as ‘heavy and torrential in places’ 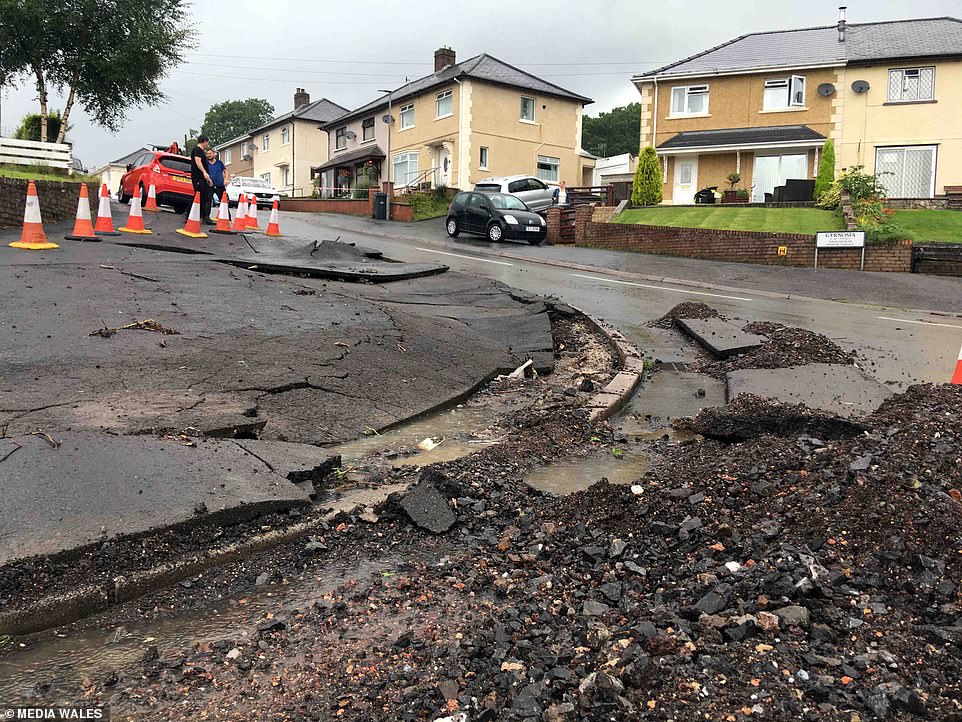 The roads in Ystradgynlais were severely damaged by the heavy rainfall. Warning cones were seen dotted alongside the pavement

Resident Carol Davies said: ‘Water has gone all the way through to one of the neighbours houses, it’s about 2feet high.

‘All of the neighbours got together to help, even the children were helping,’ she said.

‘There’s damage through to next door but that’s come through to the kitchen. If it wasn’t for the neighbours and the children she wouldn’t have got this far without their help, people have washed the floors, they have been brilliant,’ she said.

Janice Williams, who lives in Abercrave, described the flooding as ‘horrendous’. 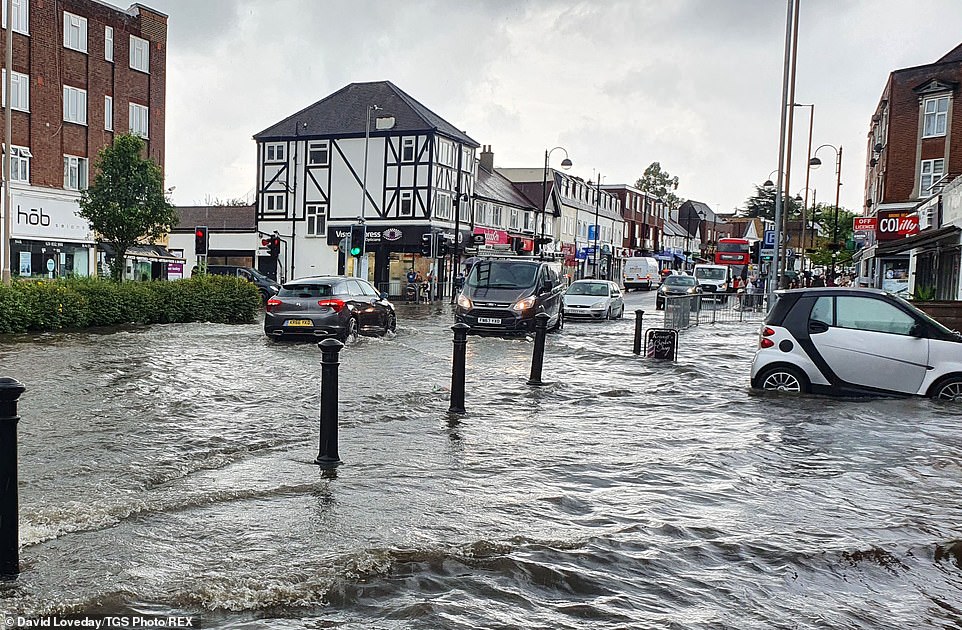 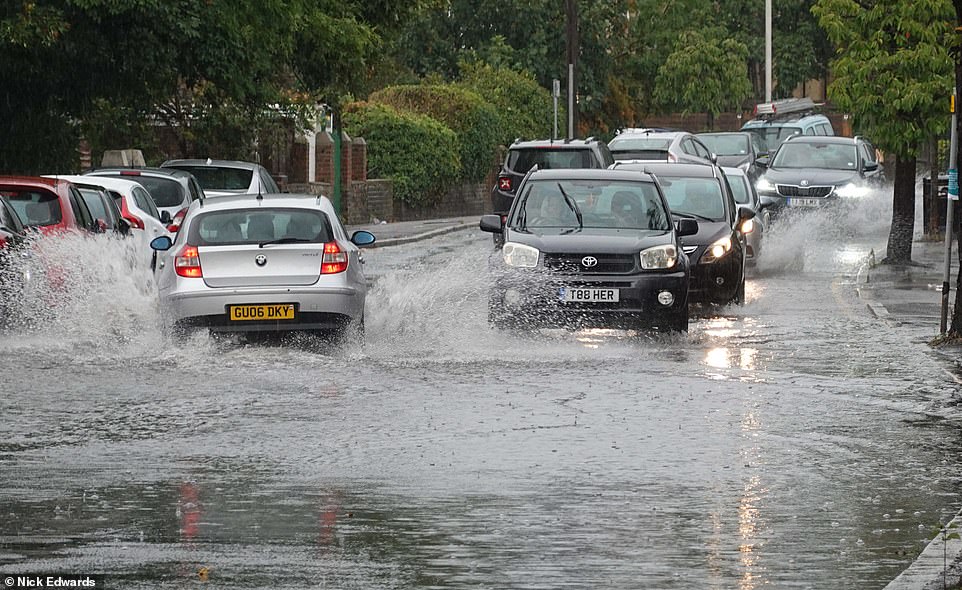 A Range Rover is driven through floodwater in Uxbridge, West London, on Monday as the area is hit by downpours

‘I’m grateful that everyone has been so brilliant here and tried to prevent further damage.

‘I never thought I would be experiencing this but my heart goes out to all the people who this has happened to in the past.

Meanwhile in Barnstaple, Devon, homes and businesses were swamped with water after heavy rain caused flash flooding on Monday.

Devon and Somerset Fire and Rescue received at least 60 calls for help as a result of the downpours.

One pub owner said they had been forced to paddle through half a foot of water to leave their property.

Tracey Benson, landlady of the Golden Lion Tap, said water levels in the town had risen to about 3ft with water appearing just below their windows.

Drivers also abandoned their cars as traffic came to a standstill.

Crews from the emergency services have been helping to pump water out of the affected homes and clean-up effort by the town council has also begun after debris and litter was left sprawled across the area.

Rob Ward, town councillor for Barnstaple, said: ‘You get heavy rain here, but this was extreme.

‘Bins floating around and staff cars not working. It’s such a surprise just how quick it came.’

Robbie Mac, another councillor for the area, said he thought it could take weeks to get some of the properties affected back to normal.

‘It’s still a mess, but the water is subsiding and we’re cleaning up now,’ he said on Tuesday.

Adverse weather also hit other areas including London and Essex as cars tried to drive through almost entirely-submerged roads.

On Sunday, a huge funnel cloud also appeared over the Bristol Channel which seemed to create a spray from the sea, while an extraordinary ‘microburst’ storm was filmed hitting the Peterborough area with hail the size of golf balls.