Britain’s Covid-19 deaths rise by 145 in preliminary count as separate grim figures show the disease has already claimed 51,000 lives in the UK (so how many people have died of the disease in YOUR area since the outbreak began?)

Department of Health bosses have yet to post the final daily figure. The preliminary toll is calculated by adding up all of the updates provided by each of the home nations. NHS England today announced 129 laboratory-confirmed Covid-19 deaths in hospitals. Wales registered nine victims in all settings, followed by seven in Scotland.

It means the official number of Covid-19 fatalities now stands at 40,742. But separate grim statistics released today suggested the disease has already claimed at least 51,000 lives in the UK. Other data shows nearly 64,000 ‘excess deaths’ have already been recorded in the UK since the outbreak spiralled out of control in March.

The figures come after Britain announced just 55 Covid-19 deaths yesterday, in the lowest daily toll since before lockdown. London hospitals also recorded no new fatalities for the first time since mid-March. But data released on Sundays and Mondays are always lower because of a delay in recording deaths at the weekend.

Department of Health figures show 324 deaths were announced last Tuesday, followed by 134 on the same day in the week before that. Experts warned the figure for May 26 was so low because of the recording lag over the bank holiday weekend.

In other coronavirus developments in Britain today: 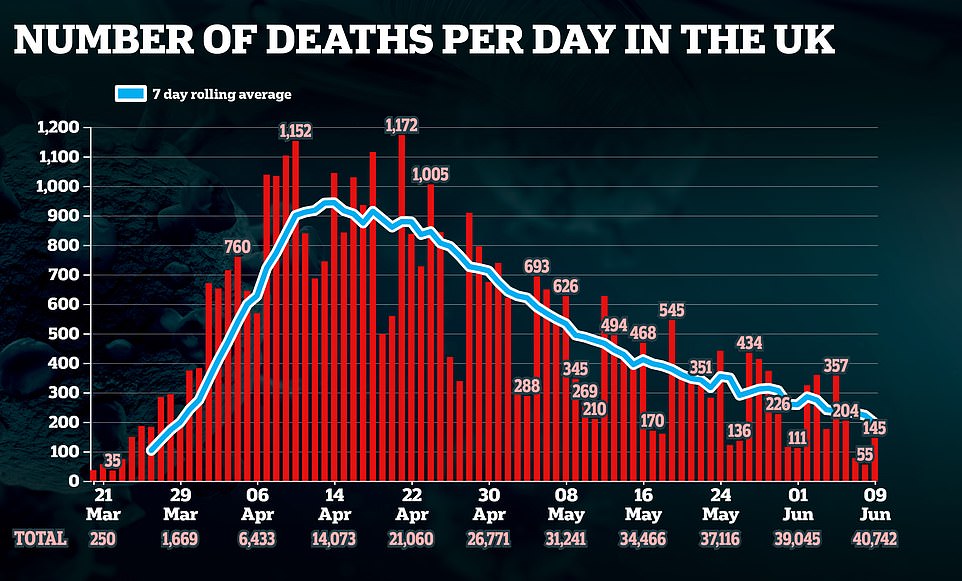 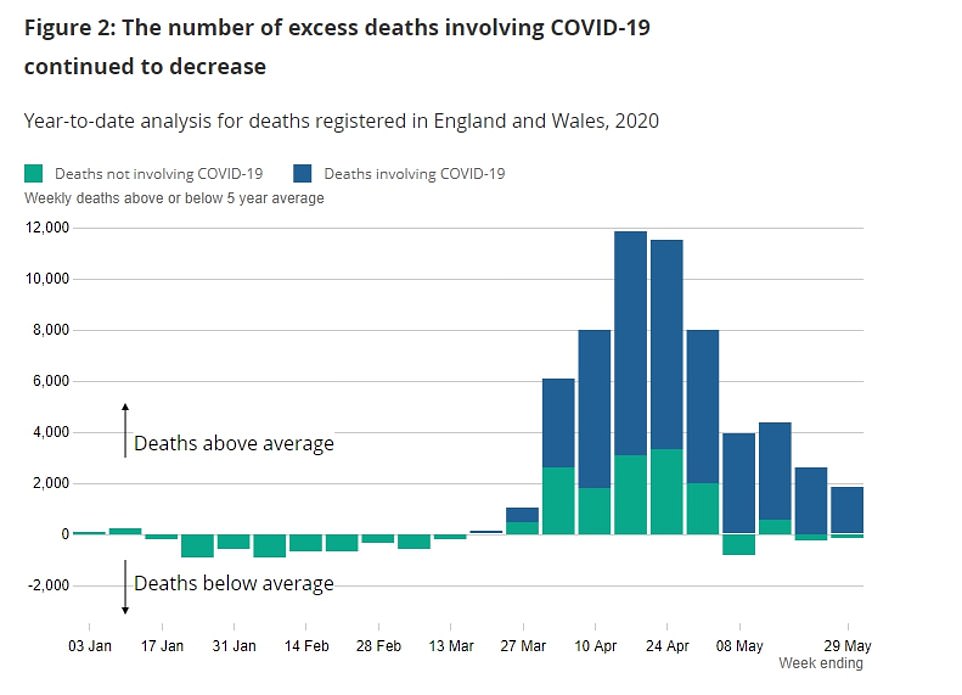 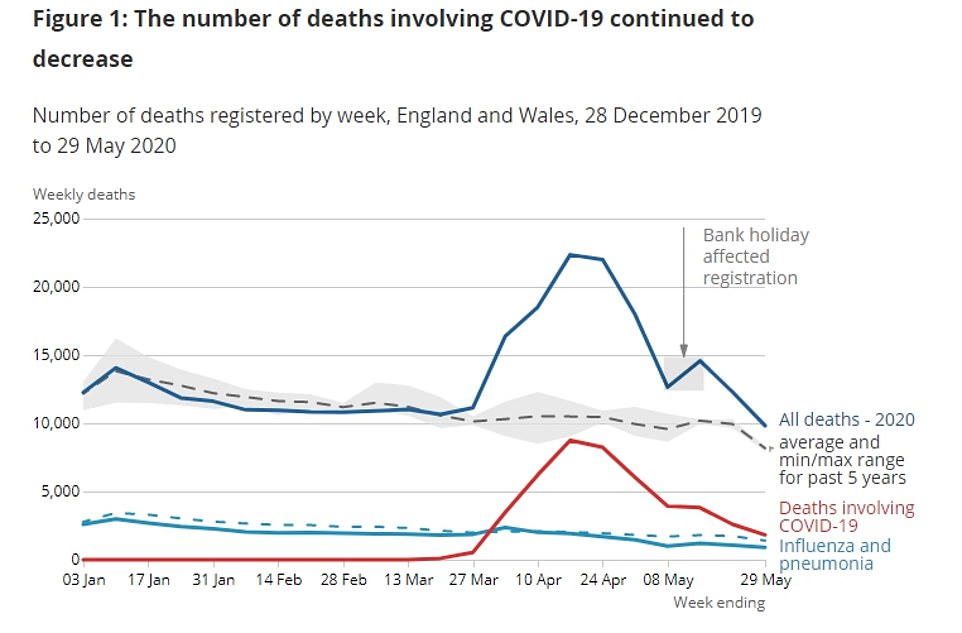 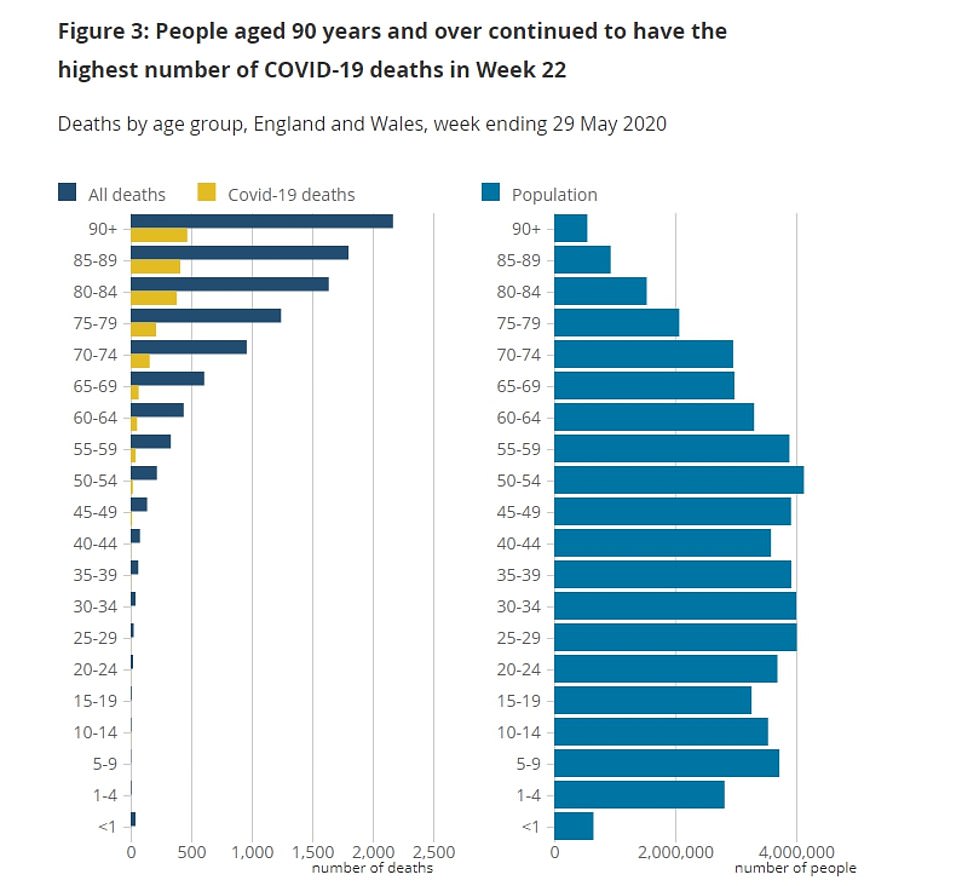 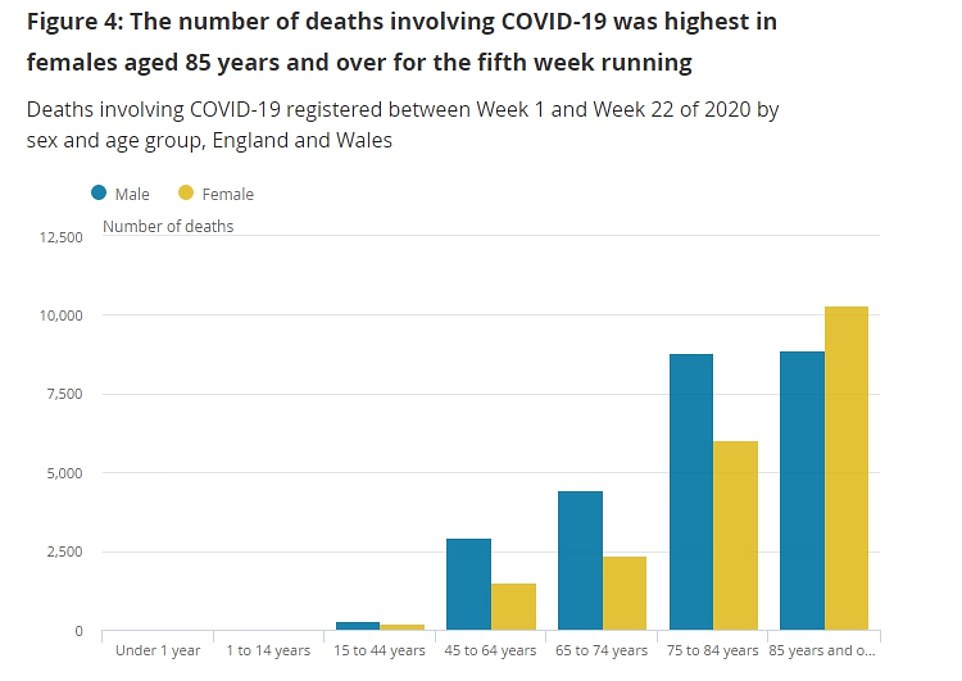 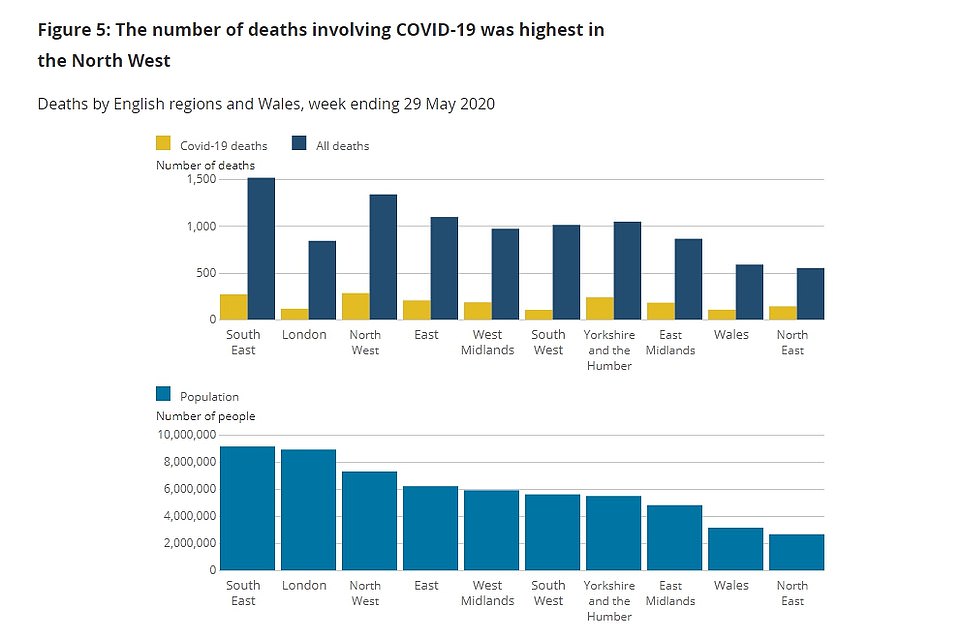 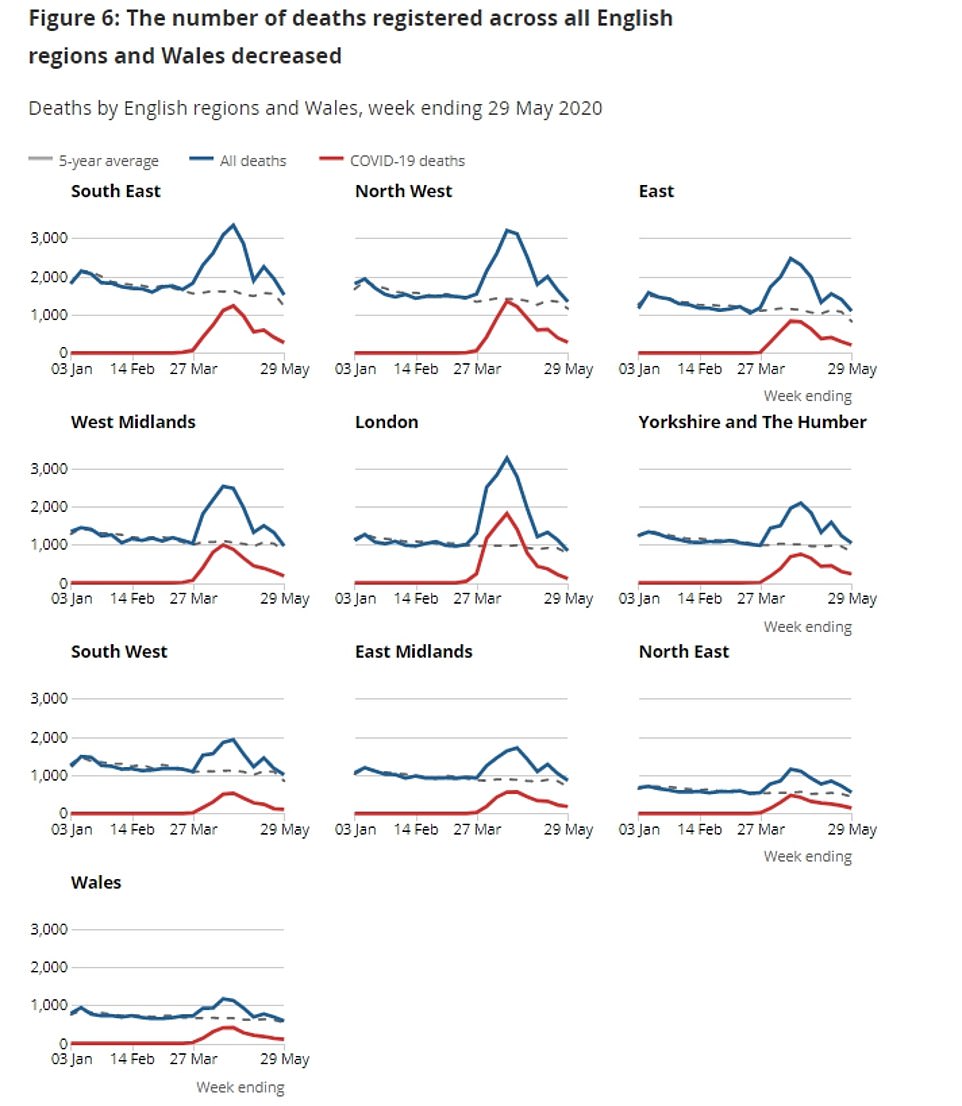 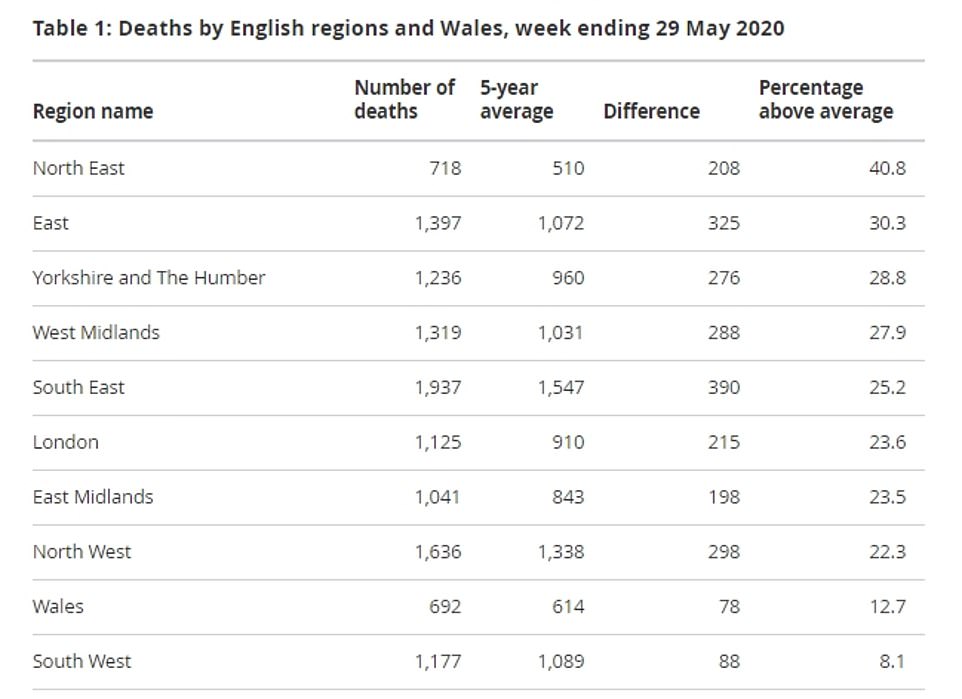 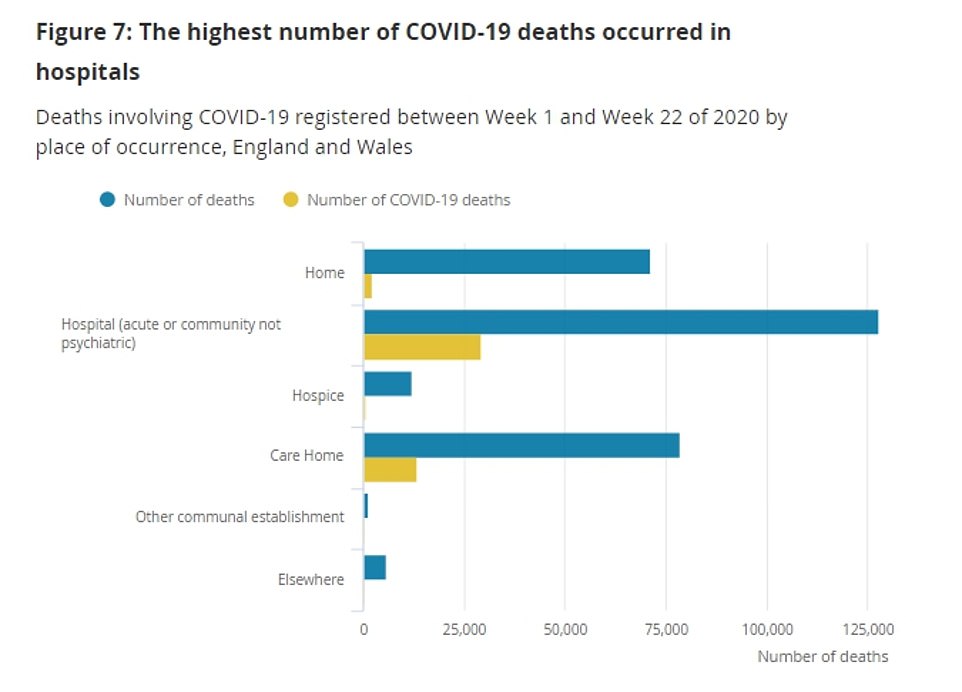 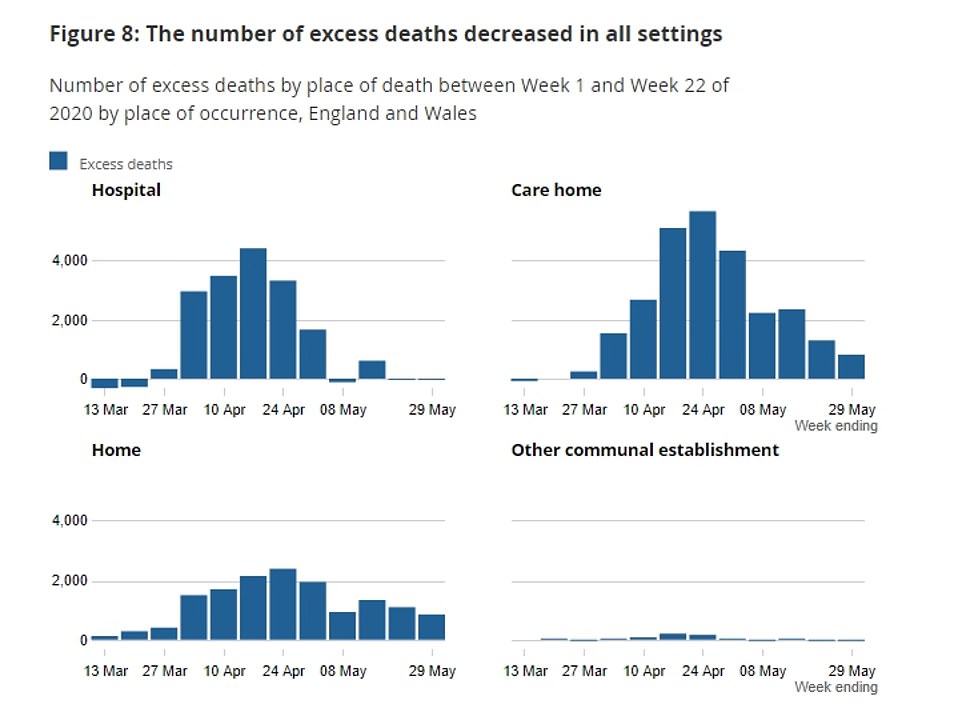 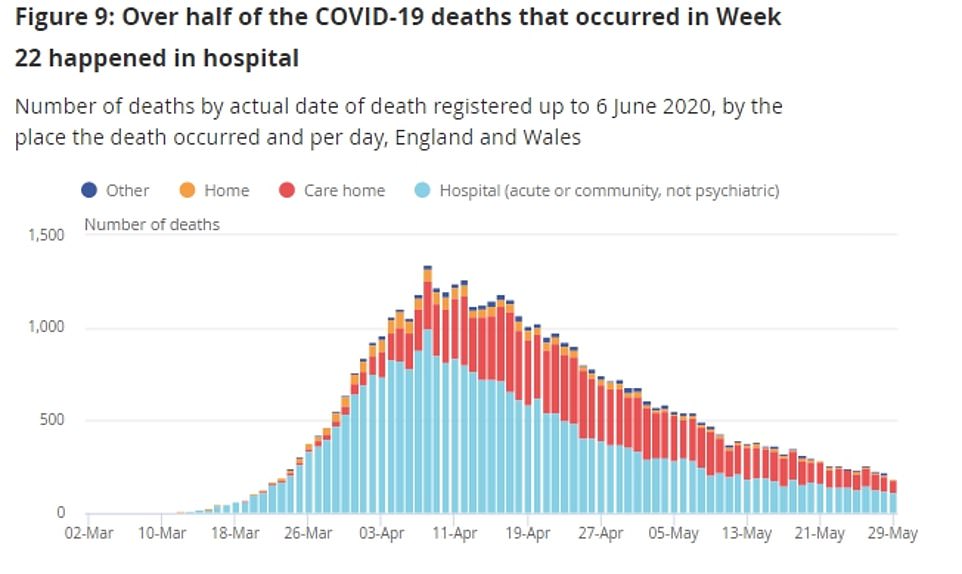 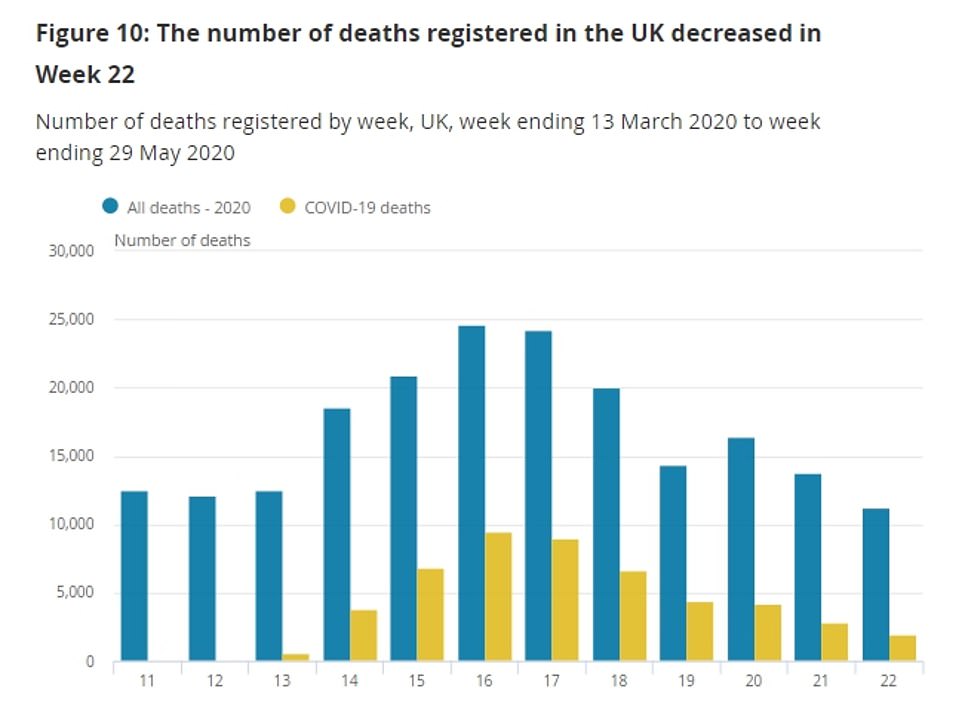 Less than a fifth of deaths registered in the week ending May 29 in England and Wales involved coronavirus — the lowest proportion since when lockdown was imposed on March 23, figures show.

There were 9,824 deaths registered in the week ending May 29 — a fall from the previous week but still 1,653 deaths higher than what would usually be expected, the Office for National Statistics (ONS) said.

Of these, 1,822 involved Covid-19 — 18.5 per cent of the total that week and the lowest number of weekly coronavirus deaths for eight weeks.

It is also the first time the proportion of weekly Covid-19 deaths has fallen to under a fifth since the week lockdown was imposed, the week ending March 27, when the virus accounted for 5 per cent of the deaths.

While numbers are falling, there have been tens of thousands of ‘excess’ deaths compared to the average number of deaths over five years for the same period.

Added together with the numbers of excess deaths for Scotland and Northern Ireland published last week, the total number of excess deaths in the UK across this period now stands at 63,596. All figures are based on death registrations.

Department of Health data released yesterday showed that 138,183 tests were carried out on Sunday, a figure that included antibody tests for frontline NHS and care workers.

But bosses again refused to say how many people were tested, meaning the exact number of Brits who have been swabbed for the SARS-CoV-2 virus has been a mystery since May 22.

Separate statistics released by the Department of Health showed 1,205 more people tested positive for Covid-19 — which was the fewest since lockdown. Just 967 people were diagnosed on March 23.

It means the official size of the UK’s coronavirus outbreak now sits at 287,399 cases. However, the true scale of the crisis is estimated to be in the millions.

The 77 Covid-19 deaths announced yesterday was around 32 per cent lower than the 113 recorded last Sunday. It was also down a similar amount from the Sunday two weeks ago (118 deaths).

The daily data does not represent how many Covid-19 patients died within the last 24 hours — it is only how many fatalities have been reported and registered with the authorities.

The data does not always match the updates provided by each of the home nations. For example, the Scottish government today announced seven deaths – but the geographical breakdown from the government has yet to be released.

But the Department of Health has a different time cut-off, meaning the daily updates from Scotland as well as Northern Ireland — which has also gone two days without a death — are always out of sync.

Data compiled by the statistical bodies of each of the home nations show 51,086 people died of either confirmed or suspected Covid-19 across the UK by the end of May.

The real number of victims will be even higher because the tally only takes into account deaths that occurred up until May 31 in Scotland and May 29 in the rest of Britain, meaning it is up to 10 days out of date.

The Office for National Statistics today confirmed that 46,421 people in England and Wales died with confirmed or suspected Covid-19 by May 29.

National Records Scotland — which collects statistics north of the border — said 3,911 people had died across the country by May 31.

Their tallies are always 10 days behind the Department of Health (DH) because they wait until as many fatalities as possible for each date have been counted, to avoid having to revise their statistics.

By comparison, the DH announces deaths for each day as soon as it receives them, meaning they are continuously updated as more registrations filter through the system.

Because of this recording lag, the number of deaths announced on any date is significantly higher by the time the ONS has calculated it.

If the most recent death toll announced by the government was increased by the same amount it would mean that there have already been 54,100 Covid-19 victims who died.

Data released by the ONS, the statistical body for England and Wales, also showed weekly deaths in the seven-day spell ending May 29 plummeted to the lowest rate all year.

Only 9,824 deaths were registered in the two countries that week — still 1,600 deaths higher than what would usually be expected.

Both England and Wales — which suffered 16,000 deaths during the darkest fortnight of the crisis in April — are now en route to the way they were before the unprecedented lockdown was imposed on March 23.

The ONS figures also showed less than a fifth of deaths registered in the week ending May 29 in England and Wales involved coronavirus — the lowest proportion since when lockdown was imposed on March 23.

It is also the first time the proportion of weekly Covid-19 deaths has fallen to under a fifth since the week lockdown was imposed, the week ending March 27, when the virus accounted for 5 per cent of the deaths.

REVEALED: THE 20 AREAS OF ENGLAND AND WALES WITH THE MOST COVID-19 DEATHS…

…. AND THE 20 AREAS OF ENGLAND AND WALES WITH THE FEWEST COVID-19 DEATHS

While numbers are falling, there have been tens of thousands of ‘excess’ deaths compared to the average number of deaths over five years for the same period.

Excess deaths are considered to be an accurate measure of the number of people killed by the pandemic because they include a broader spectrum of victims.

As well as including people who may have died with Covid-19 without ever being tested, the data also shows how many more people died because their medical treatment was postponed, for example, or who didn’t or couldn’t get to hospital when they were seriously ill.

Nick Stripe, head of health analysis at the ONS, said some deaths involving coronavirus in care homes ‘will have brought forward deaths that might otherwise have happened relatively soon’.

He tweeted: ‘We might expect deaths not involving Covid in care homes to fall below 5-yr avgs (average) in the next few weeks.’

The North West, an area of concern for the rate of transmission, had the highest number of coronavirus-related deaths over the seven-day spell (282).

Slightly more than a quarter (25.6 per cent) of deaths recorded in the North East that week involved Covid-19 — the highest proportion across all of England’s regions.

While there was a decrease in the number of deaths from all causes in hospitals, care homes, private homes and hospices, the proportion of hospital deaths involving coronavirus increased.

A separate study published today by the University of Manchester suggests that more than a fifth (21 per cent) of excess deaths that had taken place in England and Wales by early May were not linked to Covid-19.

The authors say these deaths were ‘driven by the inability or reluctance of people to access health services for other health needs’.

The study found the highest rate of non-Covid-19 excess deaths during this period was in the West Midlands — 26 per 100,000 population.