REVEALED: The British NBC journalist and anti-cyber bullying charity ‘behind’ Google’s decision to demonetize Zero Hedge and threaten The Federalist 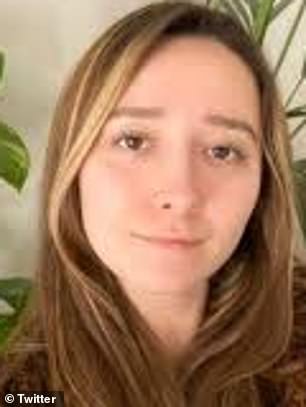 Adele-Momoko Fraser, the NBC journalist who contacted Google with the report calling for the company to demonetize right-wing sites

The NBC journalist who wrote the piece which initially seemed to prompt Google’s decision to defund ZeroHedge and to caution The Federalist is Adele-Momoko Fraser, a British journalist with two years of experience.

She quoted a Google spokeswoman who said both ZeroHedge and The Federalist had been stripped of their ability to monetize.

Momoko-Fraser is believed to be around 25. She has worked with NBC in London for six months.

Before that, she worked for British TV networks Channel 4 and Sky, but her journalism experience is brief.

She graduated with a Masters in Journalism from City University in London in 2018 and before that, obtained an undergraduate degree in Politics and International Relations from the University of Bristol.

She attended a private school in Dulwich, south London, where fees are $7,500 a year, and is understood to live in a $3million home in Hampstead, north London, with her mother.

NBC told DailyMail.com on Wednesday that she was asking for the company’s comment and did not ‘collaborate or purposely attempt to get these sites demonetized’ when she emailed them with the report by The Center for Countering Digital Hate.

After Google responded saying it had stripped the sites of their ability to make money, Fraser tweeted the NBC story and celebrated it.

She thanked The Center for Countering Digital Hate for ‘collaborating’ and used the hashtag BlackLivesMatter. 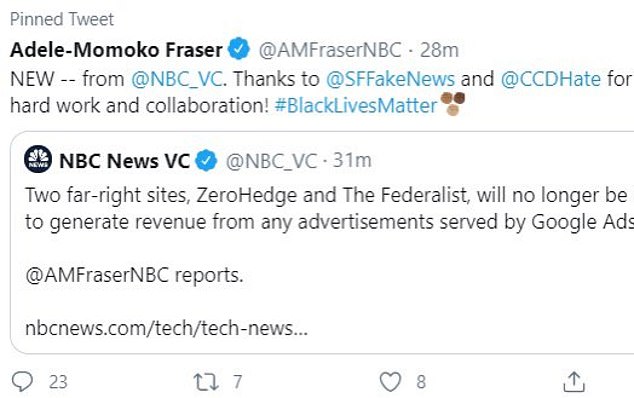 She was slammed for her terminology, with some accusing her and the center of silencing free speech.

Fraser then tweeted again: ‘To clarify this earlier tweet, we obtained this research exclusively from @SFFakeNews but we did not collaborate on the research itself.’

Her work for NBC’S Verification Center, much of which she has shared on Instagram, includes debunking COVID-19 conspiracy theorists.

It’s unclear whether she sought out the think-tank report or if they pitched it to her, but she took it to Google.

The Center for Countering Digital Hate (CCDH) was founded in 2017 by former journalist Imran Ahmed who has written for The Huffington Post in the past.

He also sits on the British government’s Steering Committee, a counter terrorism committee.

Among the charity’s patrons is Rachel Riley, a TV personality who appears on the British show Countdown and who tweeted on Tuesday in support of NBC and Google’s decision to demonetize what it called far-right sites.

The CCDH has a campaign called Stop Funding Fake News which calls on companies to pull ads from platforms like Facebook and Google because they can end up running on what it deems to be ‘fake news’ websites. 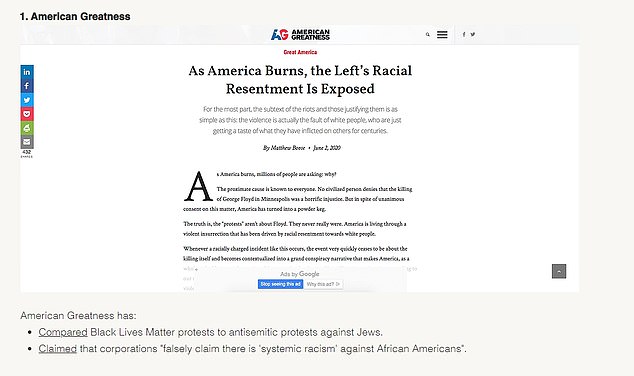 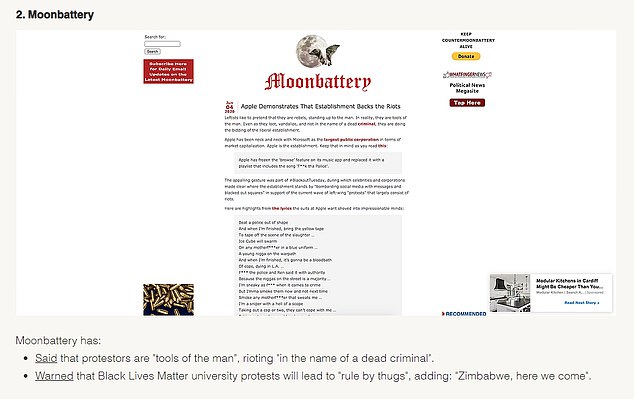 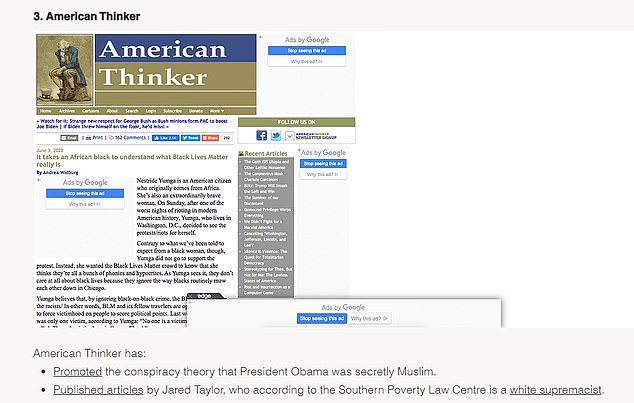 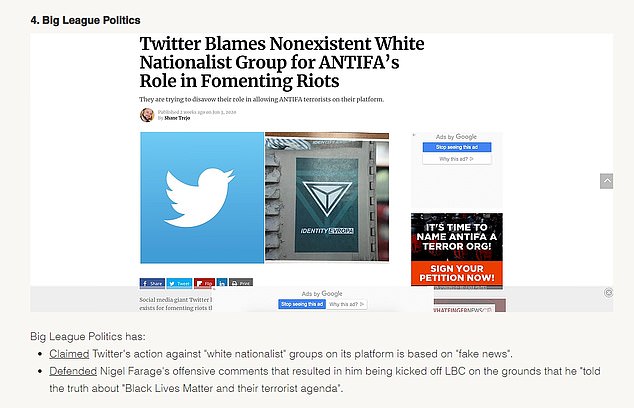 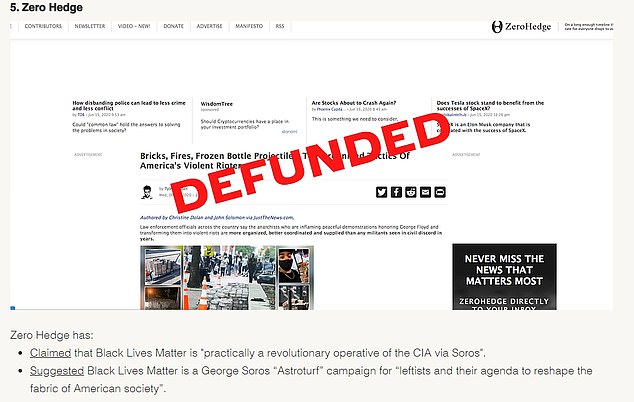 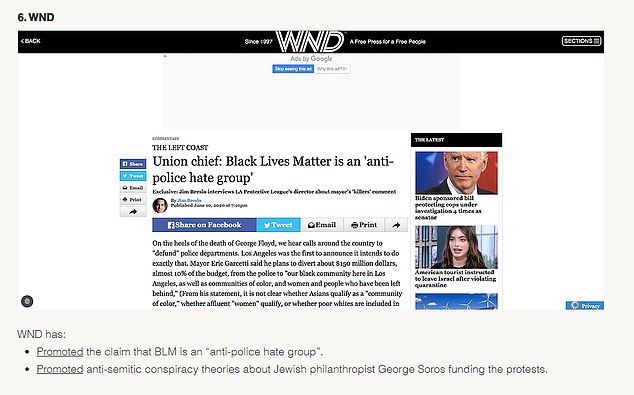 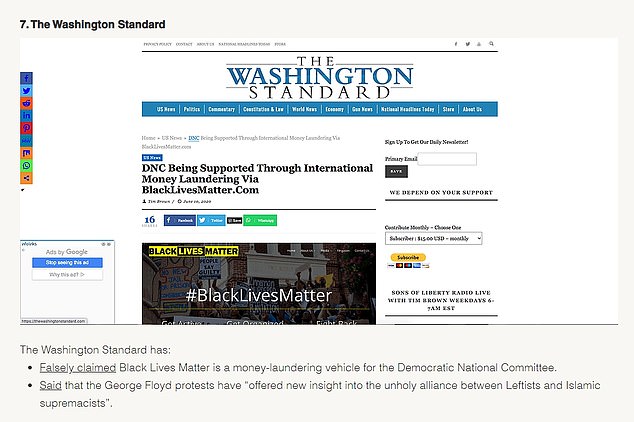 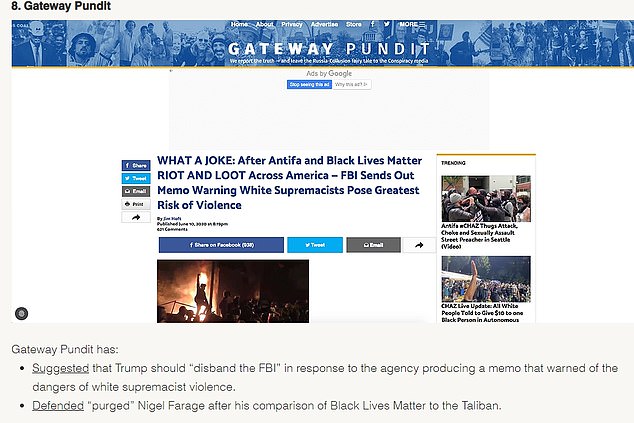 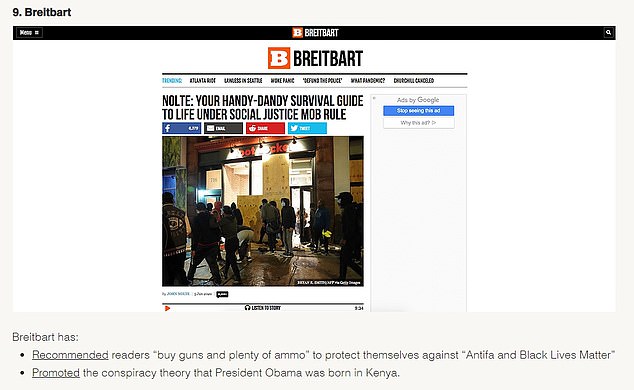 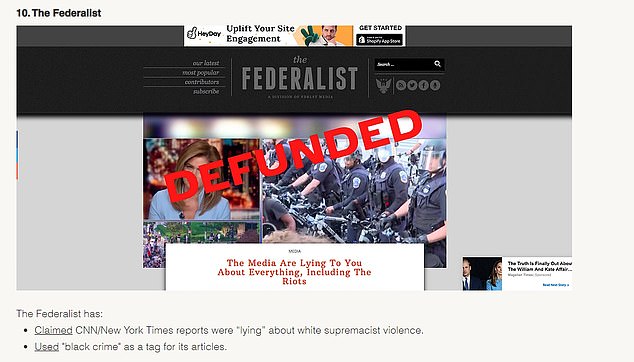 This is the report that the charity gave to NBC and that NBC then gave to Google. It’s unclear if any of the  other 10 sites were demonetized or if they received warnings threatening demonetization

British TV personality Rachel Riley, who is a patron for the charity, said Google was bowing to ‘racists’

Part of the campaign was the list of ten US websites it said had published racist content regarding the Black Lives Matter movement sweeping America. 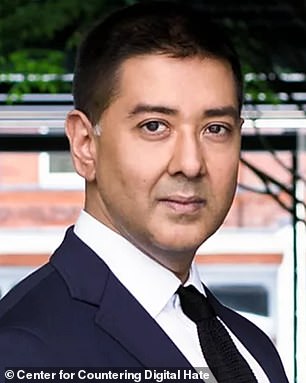 They called the campaign Defund Racism: Black Lives Matter and refer to the ten sites they think should no longer be able to make money as ‘the blacklist’.

‘The world is crying out for justice.​

‘In the wake of George Floyd’s death, a global #BlackLivesMatter movement has erupted, demanding justice for black people across the world and calling for an end to systemic racism. Stop Funding Fake News stands in solidarity with this movement, but this moment calls for more than words: it calls for action.

‘Fake News and racist narratives can cause real-world harms: dehumanising black people and whipping up fear. 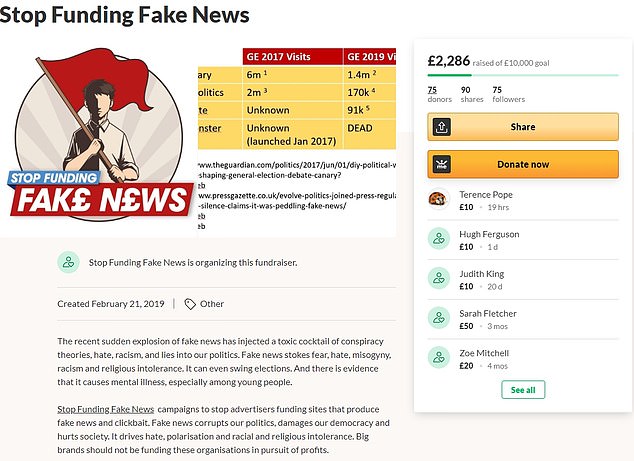 On the Stop Funding Fake News campaign homepage, it ‘hints’ for donations on GoFundMe to continue their cause.

The campaign has existed since February.

After NBC published their story on Tuesday, the charity heralded it as a victory.

They were confused when Google then walked back its claim that it had not in fact demonetized The Federalist, as reported.

Now, the charity says Google is bowing to ‘pressure’ from conservatives.

‘They then say they will stop doing so. And now they are spinning that they will not.

‘This is a crisis of their own making.’

Riley said brands continuing to advertise on the websites was the equivalent to placing ads on a bus ”of skinheads driving around London with megaphones.’

‘@GoogleAds almost did the right thing, pulling ads from an internet version of this bus yday. Don’t bow to racists whining about it,’ she said.