As what might be called “budget season” progresses – and yes, it is my sorry lot to produce a term like that – the political environment created by COVID-19 increasingly resembles the comic-book Bizarro World.

Last week, the Liberal-National Coalition government in Canberra ditched its most cherished policy principle of producing surplus budgets, on average, over the economic cycle. Indeed, deficits stretch out all the way to the economic and political horizon. 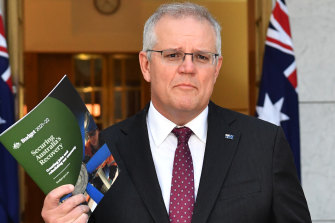 Deficits stretch out all the way to the economic and political horizon.Credit:Getty Images

Meanwhile, the country’s most left-wing state government here in Victoria is, with a new-found concern about its deficit, attempting some form of budget repair by hiking up property taxes and cutting into its public service.

It’s an inversion of orthodox expectations. A conservative government is embarking on record spending and debt accumulation, putting everything on the credit card, and the supposedly woke lefties in the Republic of Dan are at least putting on a show of trying to reform their past spendthrift ways by installing a deficit speed limiter or two.

Of course, it’s all a bit more nuanced than that. The Andrews government’s tax increases, which are expected to yield up to $2.7 billion over the next four years, are a fairly blunt and unsophisticated set of instruments. They embed Victoria as the most expensive state in which to conduct property transactions.

Economically, the rises in stamp duty and land tax have the potential to do some damage. Given that the median price of a house in Melbourne is now $1 million, your average homebuyer is unlikely to be hurt. The stamp duty increases only start to cut in on properties above $2 million and the land tax rises begin above $1.8 million. 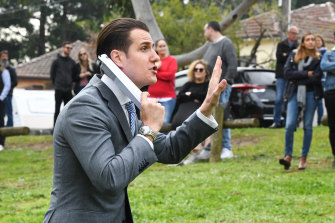 The real estate industry is unhappy about the tax increases.Credit:Peter Rae

And it’s not certain that these measures enter the thinking of buyers keen to leap into a hot property market. The real estate industry is unhappy about the tax increases, but it should be careful about wanting to have it both ways. On the one hand, it celebrates being able to sell houses for hundreds of thousands of dollars above the predicted sale price at auctions. On the other, it’s predicting that the sky will fall in if the state government wants to increase its stamp duty take by $2000 on, say, a $2.2 million sale.

But the rises will obviously hit some people, because $2.7 billion isn’t chickenfeed. Commercial landlords are likely to pass on the new imposts in the form of increased rents. Melbourne’s CBD and many shopping strips continue to be hit hard in the aftermath of the 2020 lockdowns, although there are signs of some return to normality, with previously empty shopfronts hosting new businesses. Whether these tax hikes put a stop to these revivals we’ll have to wait and see.

The real worry should be the impact on the CBD which, despite greater Melbourne’s sprawling suburban geography, plays a crucial role in the city – and the state’s – view of itself as a vital, modern place that’s on an endlessly upward trajectory.

Clearly, the budget to be delivered on Thursday will be replete with sweeteners to wash away the taste of the tax hikes and the squeeze on government departments and their employees, which could get quite ugly for the government. 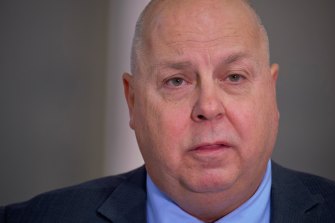 But the government’s attempts to try to restrain its deficit are not without political risk, as evidenced by the host of property industry lobby groups that have banded together to presage an extended public campaign against the Andrews government ahead of next year’s state election.

It can easily be argued that the state government’s past profligacy on such things as the public service wages bill is, after the harsh impact on Victoria of the long lockdown of 2020, finally coming back to bite it. That had to happen sometime, pandemic or not.

None of the above is meant to suggest that the Andrews government has embarked on a wholesale change of direction. After all, we haven’t even seen the budget yet. But what we’ve seen so far does hint at Victoria’s changed circumstances due to the pandemic.

The state has been sailing with the wind at its back since the global financial crisis started to subside 10 years ago. It has been a magnet for migrants from across the seas and interstate. Having shifted its economic focus away from manufacturing to the provision of services, the knowledge industries, entertainment and tourism, more than ever before since its inception as a colony, it’s in the business of attracting people.

That stopped abruptly last year. Until it restarts, assisted by Big Spender Scott Morrison, with proper, sophisticated quarantine facilities and reopened borders, the state will have to strike a more even balance between the expansionary spending programs of recent years and tighter budgetary discipline. And hope for the best.

Shaun Carney is a regular columnist.