Business groups are demanding greater clarity on which industries will be among the first to reopen as they meet with the Andrews government this week to thrash out a stimulus plan for Victoria's battered economy.

Premier Daniel Andrews has also been urged to provide assurances that the state's contact tracing system will not buckle under pressure when coronavirus restrictions begin easing and if there is another major outbreak, further crippling the economy. 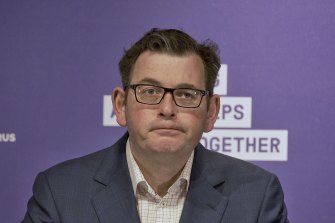 The call comes as several businesses have filed a class action lawsuit against senior ministers for damage imposed on their companies due to lockdown restrictions.

The Premier has resisted public pressure to release details on which restrictions could be lifted first when stage four ends, slated for September 13, arguing the government is still working through its road map.

Announcing 114 new coronavirus cases and 11 additional deaths on Sunday, he said the number of new daily cases was still too high to safely open the economy or "to put forward a definitive plan" for doing so.

Chief Health Officer Brett Sutton has previously indicated that more detail on the easing of restrictions could be released about September 6.

On Sunday Mr Andrews flagged some announcements this week.

The government will meet Victorian businesses and business groups in the next few days to identify what the road map out of stage four could look like.

"Now there will be a plan, it will come soon, but it will be one we will be confident of, not something that potentially gets us a few weeks of people being happier but then ultimately has to be revised because it didn't mean much when you first announced it," Mr Andrews said.

"We all want this second wave to be defeated, but it needs to be defeated properly so that it's not some smouldering fire that then takes off again, potentially burns more intensely than it ever has."

Tim Piper, the Victorian head of the Australian Industry Group, said his team would raise issues including the need to strike a balance between protecting people's health and livelihoods, recognising that businesses can operate safely, and not imposing a blanket ban on geographical locations or industries.

He would also "seek surety around the contact tracing team" and whether the government was confident it could keep up with demand when restrictions eased.

"We need to make sure there is a balance and recognition for the impact this is having on people's lives, not just from a physical health perspective but mental health," Mr Piper said.

He said the government must recognise the level of risk across different sectors, saying the manufacturing and construction industries, for example, had been low-risk.

Mr Andrews said Victorians could have confidence in the contact tracing team, which had been bolstered in recent months.

"I think we face a prospect of a very different set of circumstances [compared to the end of the first wave], but at the same time we will need to be incredibly vigilant and that's why the team is working incredibly hard," Mr Andrews said.

"They have made a whole range of improvements – very few that deliver hours, but many of which deliver minutes. That is the frustrating nature of this, it is a real grind to find the small wins, to find the small savings in time.

"We are across many of the high-risk workforces better than we've ever been … the contact tracing team is bigger than it has ever been and it will remain larger than the task."

Meanwhile, a claim filed in the Victorian Supreme Court last Friday says the government and its ministers were negligent and breached their duty of care through mismanagement of hotel quarantine.

Genome sequencing has shown infections among workers employed in hotel quarantine were responsible for almost all the cases in Victoria's second surge of COVID-19 cases, which led to many businesses being forced to close under stage four restrictions.

5 Districts NY, an American-style eatery in Melbourne's north-west, will be the lead plaintiff representing a group of businesses that claim to have lost revenue after stage three and four restrictions were imposed.

But several legal experts have suggested the litigation is unlikely to succeed because it would be difficult to prove a definite link between the hotel quarantine system failures and the impact on businesses.

The government is still negotiating with crossbench MPs to extend state of emergency powers ahead of Parliament sitting this week. Mr Andrews confirmed on Sunday that the state of disaster, announced on August 2 for one month, would also most likely need to be extended.

Opposition health spokeswoman Georgie Crozier said the Coalition was calling for an independent audit of the Department of Health and Human Services' public health team over its failures in contact tracing.

"We need to understand the resources, the IT systems, the programs and the processes, so that we've got the confidence, that we understand that when we come out of this lockdown that we will have everything in place," she said.