Mark Davis always believed his company Spacecube would grow beyond its start in the events and hospitality sector.

But the Spacecube chief executive could not have predicted they would be erecting a pop-up COVID hospital in the car park of the Monash Medical Centre in Clayton, in Melbourne’s east, barely a month after the pandemic got serious for Australia. 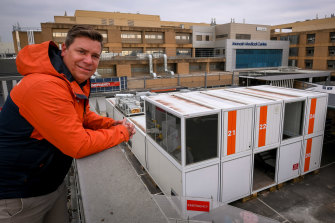 Mark Davis of Spacecube at the Monash Hospital in Clayton.Credit:Eddie Jim

The efforts of the Dandenong-based company – which has also supplied dozens of its “cubes” to pubs and restaurants across Victoria to keep them trading through COVID restrictions – has earned it a mention on the NAB’s 2021 “Innovation Index” to be published on Friday.

The bank, which has been compiling its survey since 2016, says business innovation in Australia tumbled during the crisis year to the lowest levels the NAB has recorded as firms went into survival mode amid supply-chain and cashflow disruptions, forced business closures and job losses.

But innovation is back, according to the NAB whose points-based innovation index has rebounded this year by two points – although it remains well below pre-pandemic levels – driven by businesses doing things differently in a radically altered environment.

Mr Davis says the ability to “pivot quickly” was the key for Spacecube, which found itself thrust into the health sector early in the pandemic, using its reuseable cubes to throw up Melbourne’s first dedicated testing clinic and then the more ambitious project at Monash, which went up in less than 24 hours last April and was dismantled this week.

“We always knew that there was going to be a time in our journey when we were going to supply infrastructure for much-needed commercial or even emergency response, but I guess none of us expected that that was going to happen so quickly,” Mr Davis said.

NAB small business executive Ana Marinkovic said the institution’s lending to the small-and medium business sector was back above pre-COVD levels, and that more than 90 per cent of business borrowers who had deferred loans in the crisis were now making repayments again.

“The crisis has forced many, many, many small businesses in particular, to really clean up the balance sheet, sell off unnecessary stock or equipment and refocus their efforts around where the real opportunies lie,” Ms Marinkovic said.

“Small businesses talk to me about this massive shift towards e-commerce, transitioning their business models online and really uncovering these customers and opportunities that they hadn’t previously had.

“We’re lending more than $2.5 billion a month to offer to our customers so it’s clear that businesses are finding some really amazing opportunities to invest in.”