Businessman, 23, stabbed to death by mother-of-one, 32

Businessman, 23, is stabbed to death by mother-of-one, 32, after he confronted her family of travellers over attempt to break into friend’s van

A mother-of-one stabbed a businessman to death after he confronted her family of travellers over an attempt to break into his friend’s van.

Kelly Gray, 32, knifed father-of-two David Gavin, 23, in the chest after a fight broke out when he spoke to her relatives about the attempted theft on May 17 last year.

Another member of Gray’s family came over with an axe and machete before a bare-knuckle fight broke out in Rochdale, Greater Manchester.

After Gray stabbed Mr Gavin she fled the scene and left him shouting, ‘The b**** has just stabbed me!’ before he collapsed on the ground. 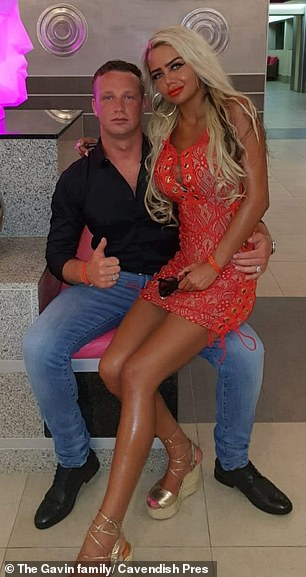 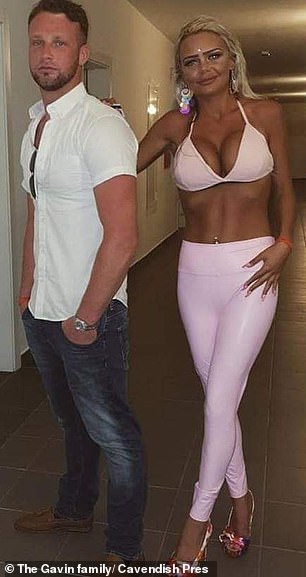 Kelly Gray, 32, knifed father-of-two David Gavin, 23, (pictured left and right with his wife Bridget) in the chest after a fight broke out when he spoke to her relatives about the attempted theft on May 17 in Rochdale, Manchester, last year

She then boarded a ferry from Holyhead in North Wales to Dublin under a false name with nine relatives to try and evade arrest.

Gray was eventually tracked down and admitted manslaughter after it was revealed she suffers with PTSD and learning disabilities. She was jailed for 10 years. 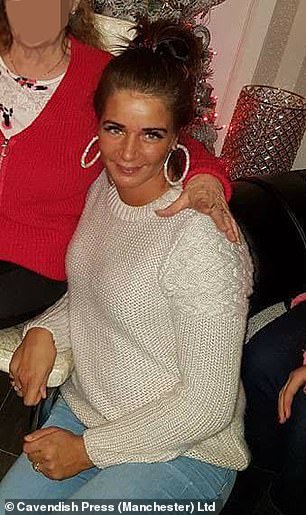 As Gray (pictured) fled the scene Mr Gavin shouted, ‘The b**** has just stabbed me!’ before he collapsed on the ground

Manchester Crown Court heard Mr Gavin ran his own patio and driveway business and was a former schoolboy boxing champion. He was described by relatives as a ‘doting father’ and a ‘hard working young man’.

Mr Gavin went to visit Gray on May 17 last year after finding out one of her family members had used a crowbar to try and break into a Vauxhall Vivaro that belonged to a kitchen fitter working at his home.

The attempted break in caused £25 worth of damage.

Mr Gavin heard from a neighbour that a man in a burgundy Ford Focus pulled up alongside the van and used some sort of hammer to smash the side window.

He was then told the car was linked to the Gray family.

Nick Johnson QC, prosecuting, said: ‘He heard the car was linked to the Gray family and asked a friend if he would go with him to where he thought the car was and get a photo of it.

‘David wanted the Gray family to pay for the damage but was also worried they would keep coming back to steal unless they were confronted.’ 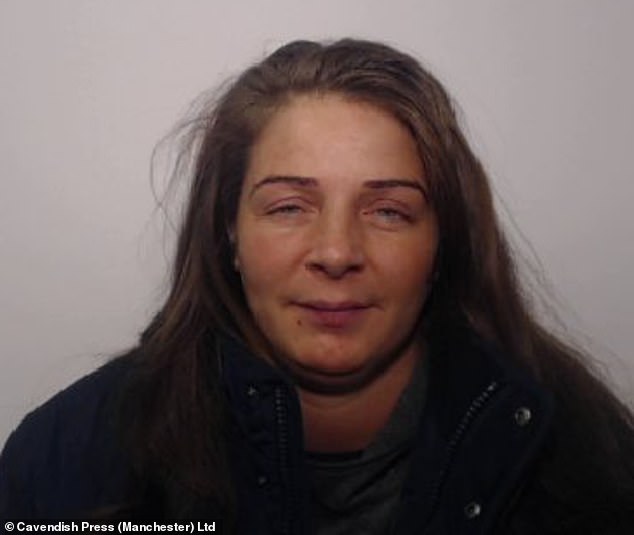 The two men found the car and Gray’s brother, James, came out of his house and shouted, ‘F*** off, why are you here?’ before urging two fellow travellers to kick Mr Gavin and his friend ‘hard on the a***.’

Mr Gavin and his friend left the scene but returned that evening with three other friends, intent on challenging the Grays over the damage.

As the group arrived Gray herself and other relatives who lived nearby were contacted by phone and urged to hurry round to get rid of Mr Gavin and his friends..

One member of the travelling family emerged with an axe and machete but was chased away before James Gray challenged Mr Gavin to a bare knuckle fight.

Mr Johnson said: ‘David took his top off and they began fighting and David was getting the better of James Gray, who had blood on the left side of his head.

‘The men continued fighting until James had had enough but Kelly then arrived and rushed towards the melee followed by her mother. She was clearly brandishing a large kitchen knife with a black handle and silver pointed blade.

‘She was grabbing the handle in a vertical position, so the blade was pointing down with a straight fist. She was watching the fighting and saying ”go on” and ”four-eyed b******”.

‘She then began waving her knife at one of Mr Gavin’s group and headbutted him in the face before going straight up to David and stabbing him on his left side, near to his shoulder, vertically down into his chest.

‘She then pulled the knife back out of his body whilst David shouted, ”the b**** has just stabbed me”.’

Paramedics rushed to the scene and found Mr Gavin gasping for breath. He died later that evening in Royal Oldham Hospital after tests showed the knife had severed a pulmonary artery.

In the aftermath of the attack, Gray was driven home and packed her belongings before boarding a ferry from Holyhead in North Wales to Dublin under a false name with nine relatives.

Officers initially mistakenly arrested another woman who matched the description of the killer before a European Arrest Warrant was issued for Gray. She was traced in Co Offaly in Leinster on August 26 and brought back to the UK.

Mr Gavin’s mother, Elizabeth, said: ‘David was a kind and thoughtful son and husband, he was helpful to people and understanding.

‘We will never get over this tragedy. David was like a friend to his father Martin, they spent so much time together. His other daughter Elizabeth has been having nightmares and misses her daddy terribly, she asks when he is coming back. How are we supposed to answer this?’

The court heard Gray had been diagnosed with PTSD and learning disabilities and said she suffered a ‘loss of control’ in the moments before the stabbing.

She admitted manslaughter after her not guilty plea to murder was accepted and was jailed for ten years.

Sentencing Judge Patrick Field QC told Gray: ‘Your victim was married with a young child and his second child was born after he died.

‘He was a hardworking young man with a good future to look forward to.

‘His death is nothing short of a tragedy for the family he leaves behind and their sense of devastation is palpable.’