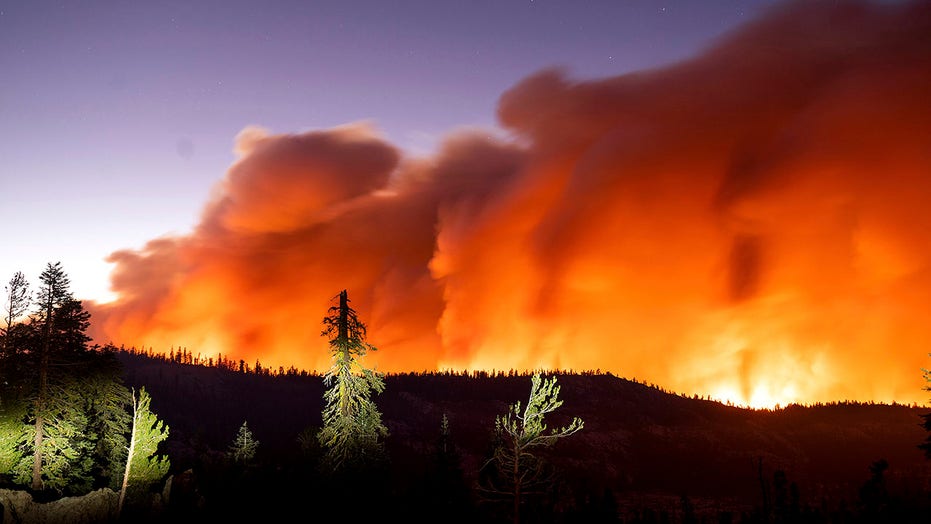 Two civilians have been injured by the wildfire, which is one of 85 large active fires and complexes across the U.S. that have burned 2.5 million acres, according to the National Interagency Fire Center.

The smoke from the Caldor Fire had forced residents of South Lake Tahoe inside, closed businesses and shuttered the city to visitors. 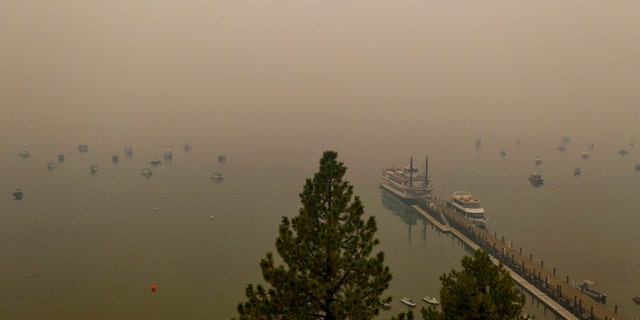 “Today’s been a rough day and there’s no bones about it,” Jeff Marsoleis, forest supervisor for El Dorado National Forest, said Sunday night.

While firefighters had believed crews could stop the fire’s eastern progress, Marsoleis said that it “let loose” on Sunday.

“To put it in perspective, we’ve been seeing about a half-mile of movement on the fire’s perimeter each day for the last couple of weeks, and today, this has already moved at 2.5 miles on us, with no sign that it’s starting to slow down,” Cal Fire Division Chief Erich Schwab said. 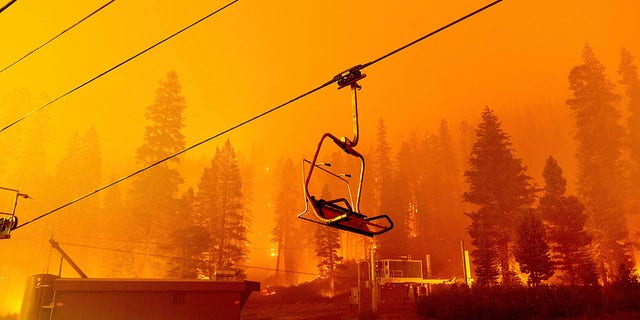 Seen in a long camera exposure, the Caldor Fire burns as a chair lift sits at the Sierra-at-Tahoe ski resort on Sunday, Aug. 29, 2021, in Eldorado National Forest, Calif. The main buildings at the ski slope’s base survived as the main fire front passed.
(AP Photo/Noah Berger)

Crews also had to carry fire hoses by hand from Highway 50 – hoping to put out spot fires fueled by winds amidst difficult terrain.

Fire managers delayed the projected date for full containment of the fire to Sept. 8.

However, heat over the weekend added challenges to an already drought-stricken landscape. 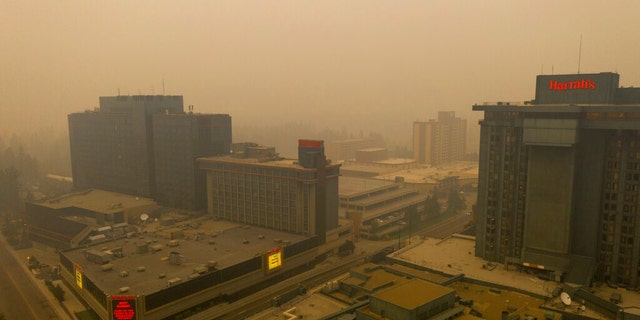 According to scientists, climate change has made the region warmer and drier in the past 30 years and will continue to make weather more extreme and wildfires more destructive.

California currently has 13 active large fires that have scorched more than 1.4 million acres.

On Sunday, the National Weather Service tweeted a video of a fire tornado, or “fire whirl,” from San Diego County’s 1,500-acre Chaparral Fire.

Elsewhere in Southern California, a section of Interstate 15 was closed due to the Railroad Fire and in the Sierra-Cascades region, the massive Dixie Fire was 48% contained and burning approximately 65 miles north of the Caldor Fire.

More than 15,200 firefighters are working on California wildfires and the U.S. Department of Defense is sending 200 U.S. Army soldiers from Washington state and equipment including eight U.S. Air Force C-130 aircraft to aid the effort.

The C-130s have been converted to air tankers with the ability to dump thousands of gallons of water on the flames.