Home » World News » Calls for Rule, Britannia! to be banned from Last Night of the Proms

Calls for Rule, Britannia! to be banned from Last Night of the Proms

BBC Music magazine columnist calls for ‘crudely jingoistic’ songs Rule, Britannia and Land of Hope and Glory to be scrapped from Last Night of the Proms because they are ‘insensitive’ in wake of BLM movement

A columnist for a BBC magazine has called for ‘crudely jingoistic’ songs to be scrapped from the Last Night of the Proms.

Richard Morrison says a complete overhaul is needed of the famous classical music concert including dropping traditional patriotic songs Rule, Britannia! and Land of Hope and Glory from its finale.

Proms director David Pickard should replace the ‘toe-curling embarrassing anachronistic farrago of nationalistic songs’ with a finale which doesn’t ‘provoke offence or ridicule’, he says. 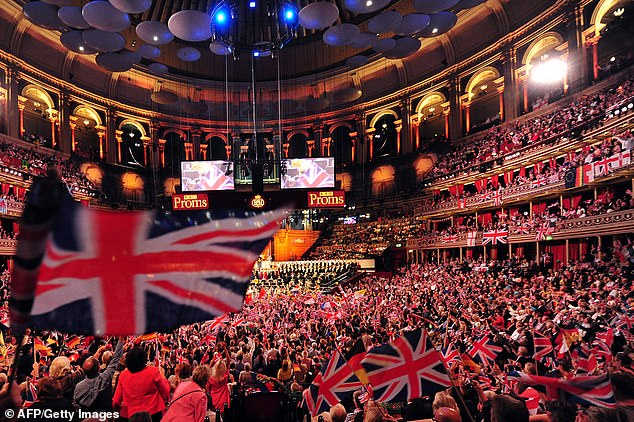 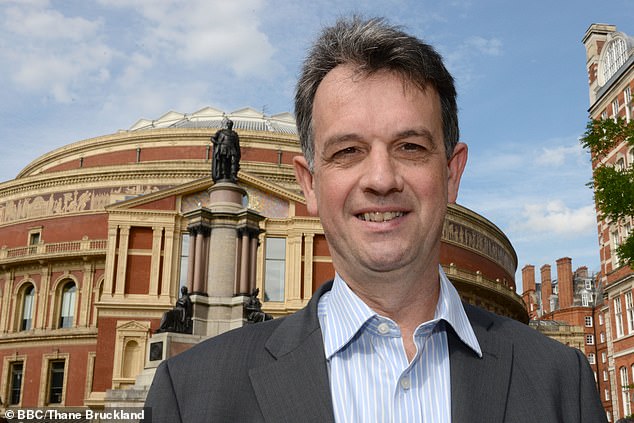 Proms director David Pickard, pictured outside the Royal Albert Hall, has been urged to revamp the final night – which will be held without an audience due to Covid-19 restrictions

Morrison – who studied music at Cambridge University and has been a BBC Young Musician of the Year judge – claims it would be ‘insensitive, bordering on incendiary’ to chant nationalist songs this year in the wake of the Black Lives Matter movement.

Instead, the BBC should transform The Proms finale so it ‘reflects the attitudes of its 21st-century performers and audiences, not their Edwardian predecessors’.

Flag-waving crowds will be absent from London’s Royal Albert Hall during this year’s socially-distanced summer season of concerts due to the Coronavirus outbreak.

But Morrison says the Proms should take the opportunity to do away with what many will consider to be the concert’s most stirring moments.

He wrote: ‘When I look around me – particularly at the people sitting in the posh seats whom I’ve never seen at any other Proms – and realise that I can detect absolutely no sign of irony as they roar out these crudely jingoistic texts. 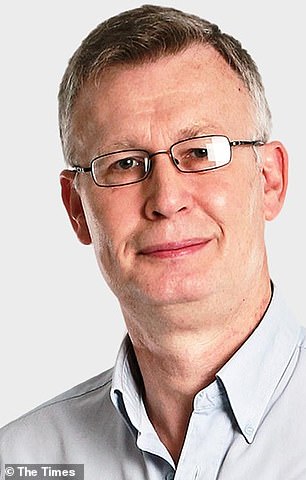 Richard Morrison, pictured, said many of the songs can no longer be deemed acceptable to modern audiences

‘On the contrary, they seem to mean every single word. And even if they don’t, what comes across to the worldwide TV audience is a stereotype of Little England that was already being lampooned when I first went to the Proms half a century ago.’

Writing in the BBC Music Magazine, Morrison said: ‘With massed choirs and a packed, flag-waving audience ruled out on medical grounds, there will never be a better moment to drop that toe-curling embarrassing anachronistic farrago of nationalistic songs that concludes the Last Night of the Proms.

‘And I don’t meant drop them just for this year. I mean forever.

‘They form a kind of unholy trinity: Jerusalem, Land of Hope and Glory and Rule, Britannia!

‘Jerusalem I can just about endure, though I think the questioning, almost incredulous nuances of William Blake’s words are being massively misunderstood if they are hurled out like a football chant.

‘But the other two? Each year I try to convince myself that they are being performed “ironically”. After all, there can’t be many people in 2020 who think that Britain really does rule the waves or that God will make us “mightier still” with each passing epoch. How else could you sing those words, except as history re-enacted as farce?’ 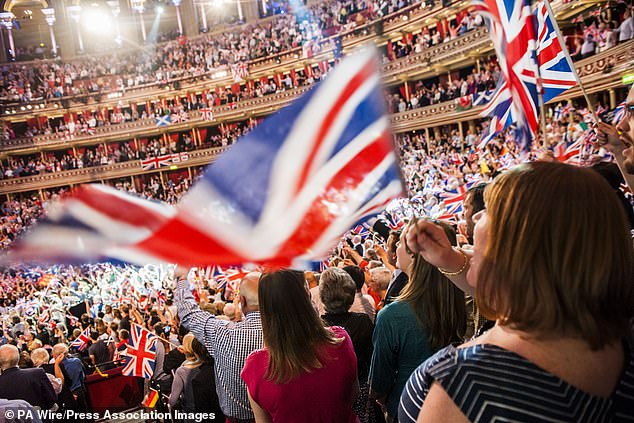 The Last Night of the Proms features songs such as Rule, Britannia!, Land of Hope and Glory and Jerusalem to an audience of flag-waving fans

The BBC ‘sensibly replaced’ songs with more ‘reflective music’ but restored its usual programme the following year, he claims.

The Times’ chief music critic adds: ‘The line announcing that “Britons never will be slaves” evokes associations that strike me as totally unacceptable in 2020.

‘Yes historians will point out that in 1740, when James Thompson wrote those words for Thomas Arne to set in his patriotic masque Alfred, there was a real danger that the British would be enslaved by more powerful continental nations, not to mention Barbary pirates. A strong Royal Navy was a guarantee of the nation’s liberty.

‘But Britain’s maritime power was also being used for a mush nastier purpose: to transport captive Africans, in wretched conditions, across the Atlantic to the American colonies.

‘That was the hugely profitable outcome of Britannia “ruling the waves”: ensuring that hundreds of thousands of other people were turned into slaves, even if Briton’s weren’t.

‘In the wake of the Black Lives Matter protests and the toppling of the statue of the slave trader Edward Colston in Bristol, it would surely be insensitive, bordering on incendiary, to roar out these hypocritical 18th-century words, with or without irony.’

The Black Lives Matter organisation has had a significant impact in Britain, with high profile displays by premiership footballers and England cricketers supporting the organisation.

Even the Independent Office for Police Conduct (IOPC) has began an investigation into stop and search policies and the use of force by police.

Campaigners complain young black men are fare more likely to be stopped and searched than their white neighbours.

Metropolitan Police Commissioner, Cressida Dick, this week apologised to British sprinter Bianca Williams for the ‘distress’ caused when she and her partner were stopped by police. Nothing was found in the search.

IOPC director general Michael Lockwood said :’Evidence of disproportionality in the use of police powers has long been a concern which impacts on confidence in policing, particularly in the BAME communities.

‘But even with the numbers and the statistics, particularly from stop and search data, we still need to better understand the causes and what can and should be done to address this.’

Black people were more than eight times more likely to be stopped and searched than white people in 2016-17, according to a 2018 study by drugs charity Release and the London School of Economics.

Police forces currently deal with the majority of complaints where discrimination is alleged themselves, about 32,000 a year, according to the IOPC, but the watchdog will now take on more of these.

As well as looking at stop and search and use of force, the IOPC will review how forces treat allegations of hate crime against BAME communities and allegations that police do not treat BAME victims of crime, as victims.

In 1999, the Met Police were branded institutionally racist for their bungling of a high-profile racially motivated killing of a black teenager, Stephen Lawrence, six years earlier.

The report, and subsequent public outcry, led to an overhaul of the force.

What is the history of Rule, Britannia and Land of Hope and Glory?

Rule, Britannia originates from the poem of the same name by Scottish poet and playwright James Thomson, and was set to music by English composer Thomas Arne in 1740. 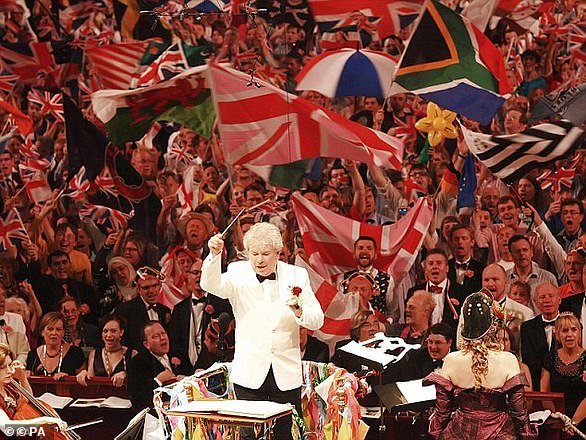 The song has been an integral part of the annual Remembrance Day ceremony since 1930, when it became the first song played in the programme known as The Traditional Music.

It regained popularity at the end of WWII in 1945 after it was played at the ceremonial surrender of the Japanese imperial army in Singapore.

Rule, Britannia is usually played annually during at the BBC’s Last Night of the Proms, but its inclusion has promoted controversy in recent years as it was deemed too patriotic.

Land of Hope and Glory lyrics:

Land of Hope and Glory

Mother of the Free

How shall we extol thee

Who are born of thee?

Shall thy bounds be set;

God, who made thee mighty

Dear Land of Hope, thy hope is crowned

Once more thy crown is set

Have ruled thee well and long;

By Freedom gained, by Truth maintained

Thine Empire shall be strong

Thy fame is ancient as the days

As Ocean large and wide:

A pride that dares, and heeds not praise

A stern and silent pride

With what our sires have won;