Pastor who stood up to police in viral video speaks out

A Canadian pastor who went viral last month for ordering out police who showed up to his church on Easter weekend was arrested Saturday for violating COVID-19 limits on gatherings set by a new court order.

Pastor Artur Pawlowski, the head of Calgary’s Street Church in Alberta, and his brother, Dawid Pawlowski, were arrested and charged with “organizing an illegal in-person gathering,” the Calgary Police Service said in a statement.

Video capturing the arrests showed several police vehicles parked on the street as officers carried the handcuffed brothers, who appeared to refuse to walk on their own. An onlooker can be heard telling the officers, “Shame on you guys, this is not Communist China. Don’t you have family and kids? Whatever happened to ‘Canada, God keep our land glorious and free’?”

The arrests come after Alberta Health Services on Thursday obtained a Court of Queen’s Bench Order that applies to gatherings, including protests, demonstrations and rallies.

The order imposes new restrictions on organizers of protests and demonstrations, requiring compliance with public health orders including masking, physical distancing and attendance limits, according to police. 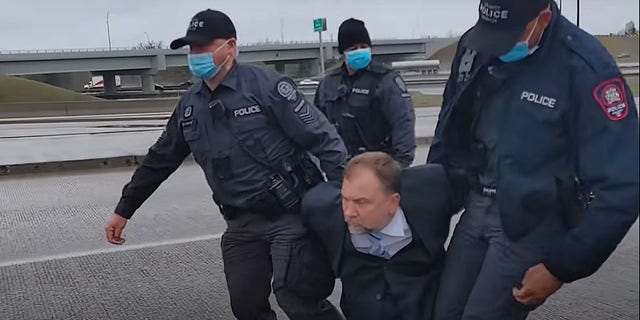 Video of the arrest Saturday was shared to YouTube.
(Artur Pawlowski TV)

Calgary Police Service said officers served an organizer of the church service with the court order “in an effort to ensure that citizens attending the Saturday service were abiding by the current COVID-19 public health orders.”

“The order was served prior to the church service, and CPS did not enter the church during the service,” the police agency said. “The service organizer acknowledged the injunction, but chose to ignore requirements for social distancing, mask wearing and reduced capacity limits for attendees, and continued with the event.”

Last month, Artur Pawlowski was holding a service on Holy Saturday when several uniformed officers entered the building. In a video of the encounter shared to YouTube, the pastor can be heard shouting at the masked officers to leave.

“Out of this property immediately until you come back with a warrant,” he yelled. “I don’t want to talk to you. I don’t care what you have to say.”

“Get out of this property, Nazis,” Pawlowski continued. “Gestapo is not allowed here.”

The officers exited the building without incident.

Pawlowski has regularly spoken at anti-mask rallies in Calgary and was fined last year for failing to adhere to COVID-19 restrictions earlier in the pandemic, CBC News reported.

He told Fox News last month that he grew up in Poland behind the Iron Curtain and equated increased government control in Canada over religious gatherings to what he experienced living under the Soviets.

In its statement Saturday,  Calgary police said, “It is important to understand that law enforcement recognizes people’s desire to participate in faith-based gatherings as well as the right to protest. However, as we find ourselves in the midst of a global pandemic, we all must comply with public health orders in order to ensure everyone’s safety and wellbeing.”

PASTOR ARTUR PAWLOWSKI SHARES HIS STORY OF EASTER CONFRONTATION WITH POLICE: ‘HOW DARE THEY’

“We continue to ask those who may be considering organizing or participating in any outdoor events to ensure they are familiar with public health order requirements and to do their part to prevent further spread of the virus.”

Another high profile arrest in the region came Saturday as hundreds protested outside The Whistle Stop Cafe in Mirror, Alberta, in support of owner Chris Scott. Alberta Health Services said it shut down the restaurant Wednesday after receiving more than 400 complaints since January, the Calgary Herald reported.

Royal Canadian Mounted Police arrived at the “Save Alberta Campout Protest” and began ticketing attendees. Scott was taken into custody.

Video of the arrest posted to The Whistle Stop’s Facebook page showed officers patting down and handcuffing Scott before placing him in the back of a police vehicle.

In response to the court order, the Alberta RCMP issued a statement Friday outlining a variety of ways to enforce the order, including “the ability to issue tickets, fines and criminal charges to individuals who are breaking public health orders by organizing and/or attending these events.”

“This can include arrest and removal any person who has notice of this Order and chooses to act in violation of it,” the RCMP said. “Law enforcement agencies can act immediately under this injunction, without the necessity of Alberta Health Services attendance. … Our primary role is, and always will be, keeping all Albertans safe, while upholding the law.”