With midterm primaries helping set the direction for the Democratic and Republican parties, most Americans, including many of the parties’ own voters, aren’t terribly happy with the parties or what they’re talking about. Given that Sunday’s CBS News poll finds most aren’t happy with the direction of the country either, the major political parties aren’t providing much solace.

For starters, the Democratic Party — which controls Congress and the presidency — is not seen by a majority as either “effective” or “in touch,” which are, no doubt, important measures for a party in power. The Democratic Party is more apt to be described as “weak,” a label applied by a slight majority of Americans, than it is “strong.”

The Republican Party, for its part, is described by a slight majority as “extreme,” a term Americans apply to the GOP more so than to Democrats, though neither really escapes the label. Independents are more likely to call the GOP extreme. The GOP is described as “strong” more often than as “weak,” but it is also described by Americans more often as “hateful” than as “caring” — by double digits. 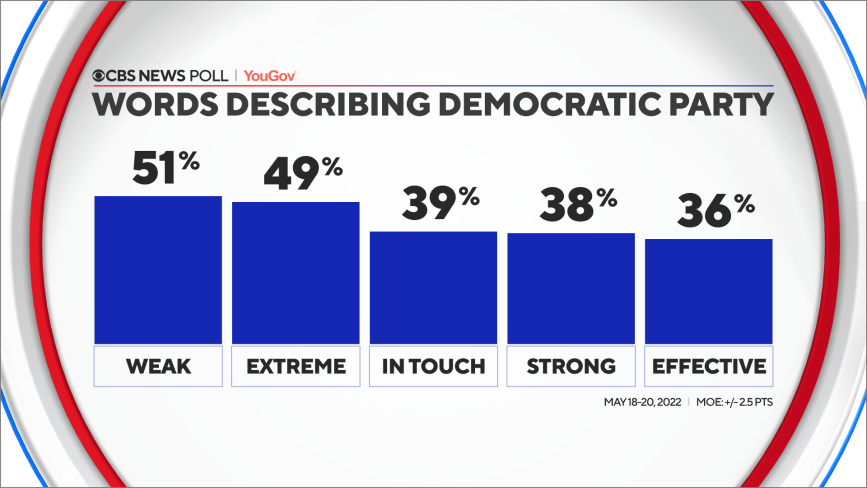 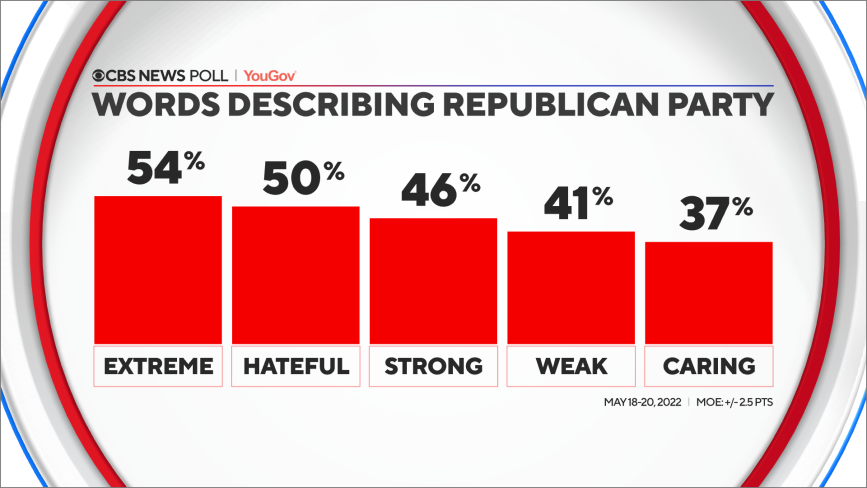 Primaries tend to find candidates arguing over matters that appeal to their bases, but as different as each side’s campaigns are, there is something voters of each side share: a desire for candidates to focus on inflation. Perhaps that’s no surprise, given how large it looms for most Americans. 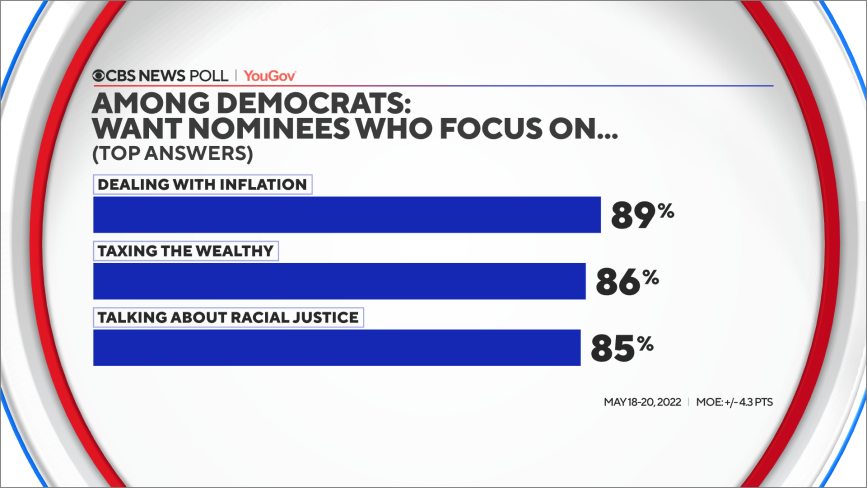 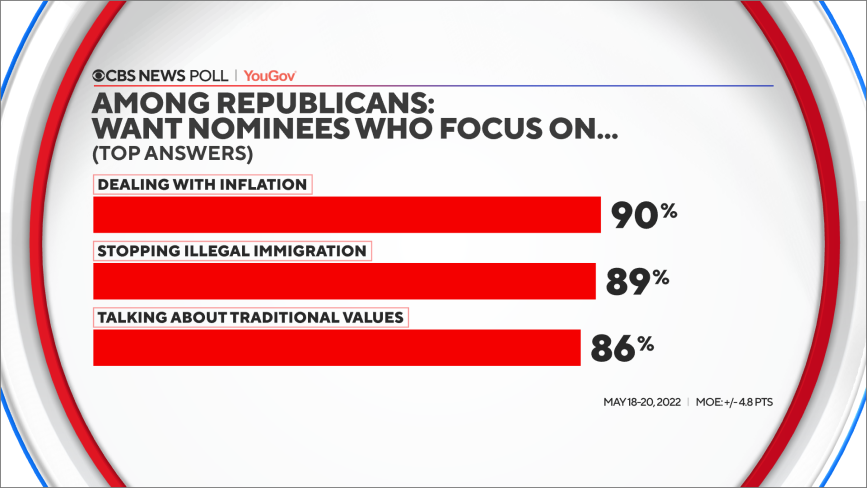 A majority of independents also want the Democrats to focus on abortion rights. 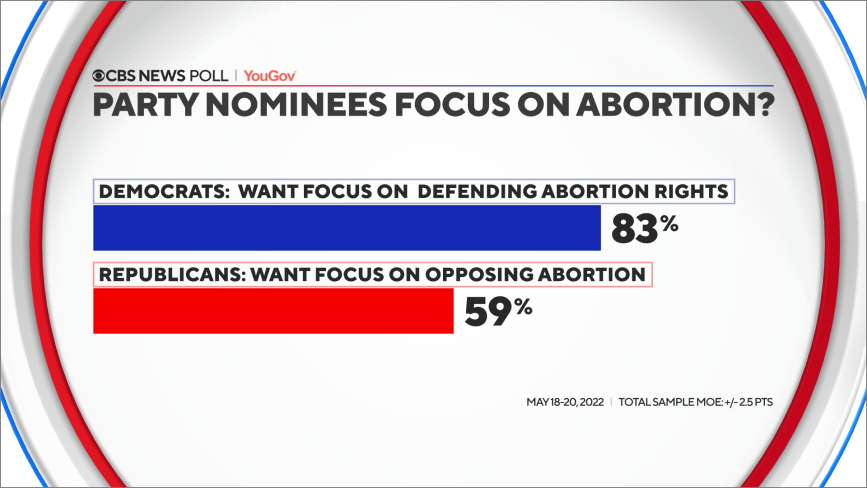 But despite being in power during a time of inflation, Democrats don’t cede that much ground to Republicans on who’s trusted to deal with it. It’s 51% of Americans who trust the GOP, not much more than the 49% who trust the Democrats on inflation. It’s the same nearly even gap on the economy. And that may be because the parties’ candidates aren’t talking about it enough. 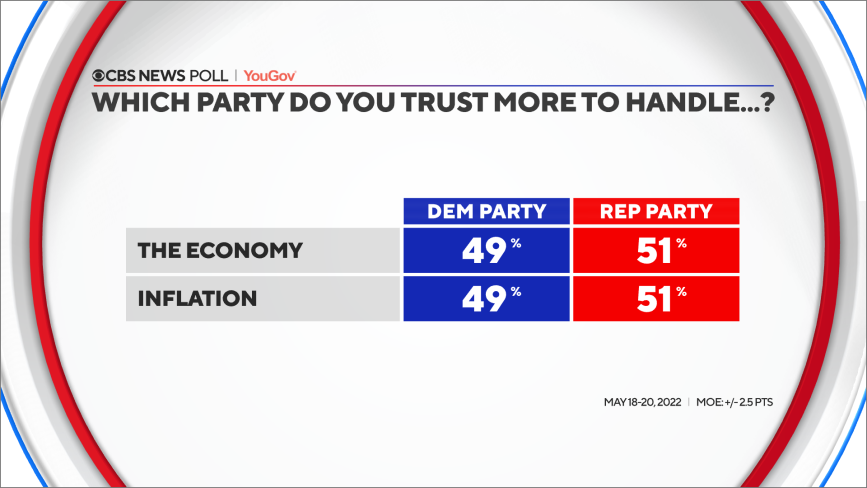 Democrats have an advantage being trusted on abortion and coronavirus.

Within the Republican rank-and-file, there’s a divide over how much they want to hear about loyalty to former President Donald Trump, some of which we’re seeing play out in the primaries right now. A slight majority of Republicans do want their candidates to focus on showing loyalty to Trump, but nearly half don’t. Related to this, four in 10 Republicans want the nominees focused on the 2020 election, but most don’t. 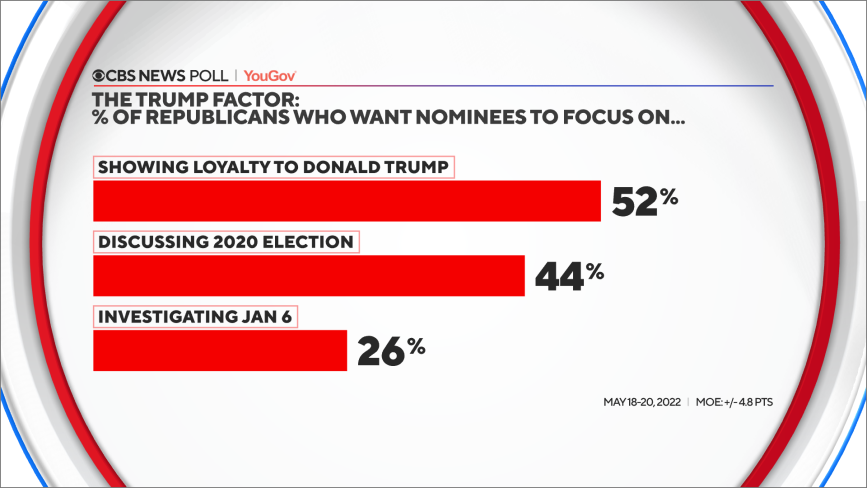 Who is fighting for whom?

We also see such dramatic differences in which people Americans think the parties support — or don’t. The overall picture reminds us of how much Americans see the parties dividing them, not only on policy, but by demographic groups.

Conversely, they see the Democratic Party as fighting for Black and Hispanic Americans more so than for White Americans.

Americans are more likely to believe the GOP fights more against the interests of women than for women, and women overall describe things this way.

Men, meanwhile, are much more likely to think the Democrats fight more for women than for men, but a majority of men think the Republican Party fights for them (and more so than for women). 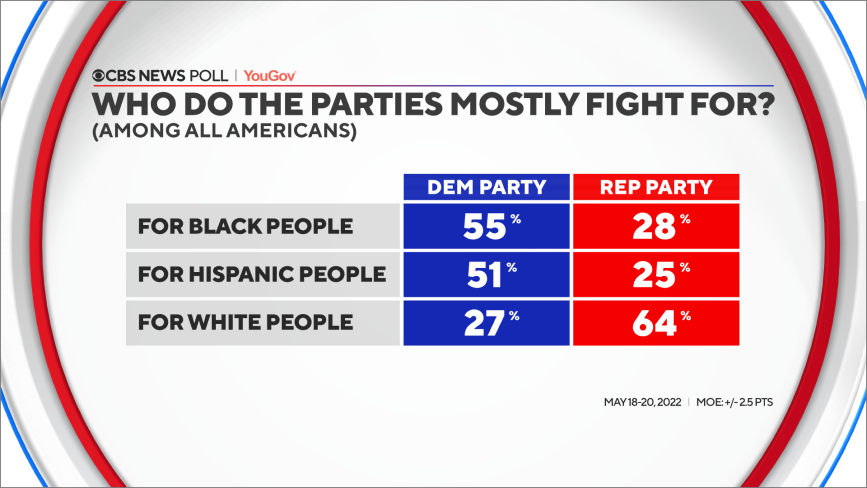 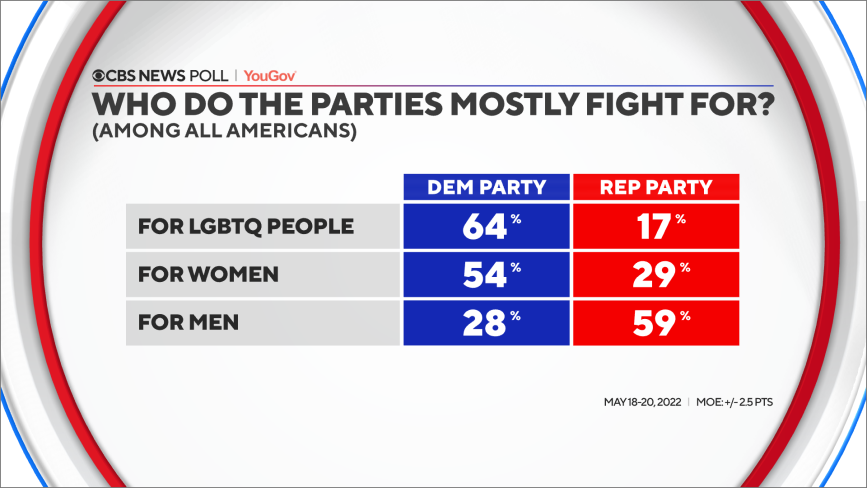 Echoing some of these perceptions are big differences in how partisans within the parties approach the country’s racial diversity — and each group’s partisans tend to think they’re not being treated fairly. 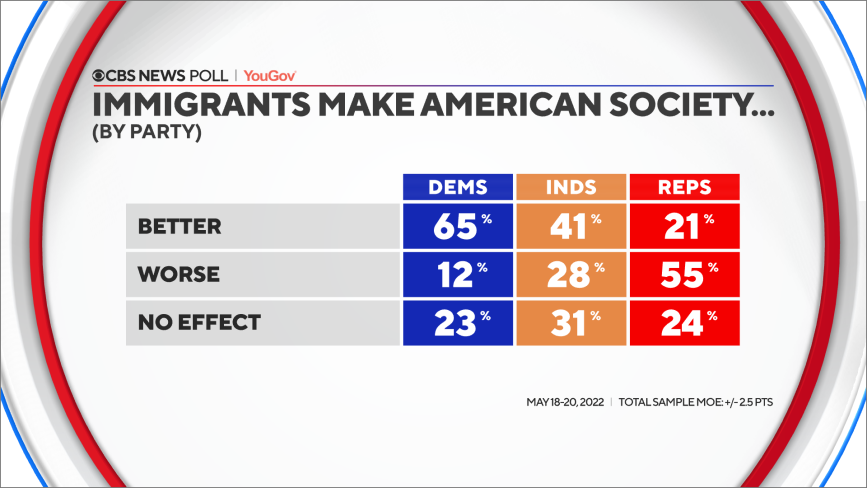 Republicans are more likely to say White Americans suffer “a lot” of discrimination than they are to say Black Americans do. 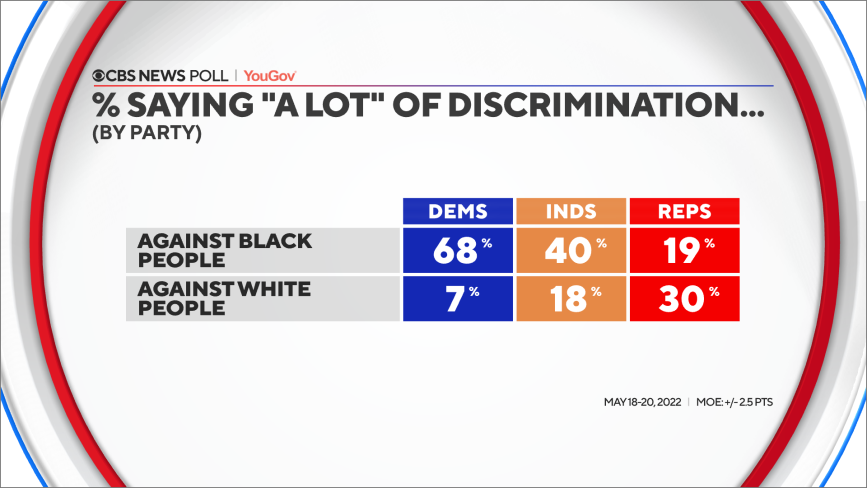 Democrats see quite the opposite. And Democrats are more likely to say it’s very important for political leaders to condemn White nationalism. 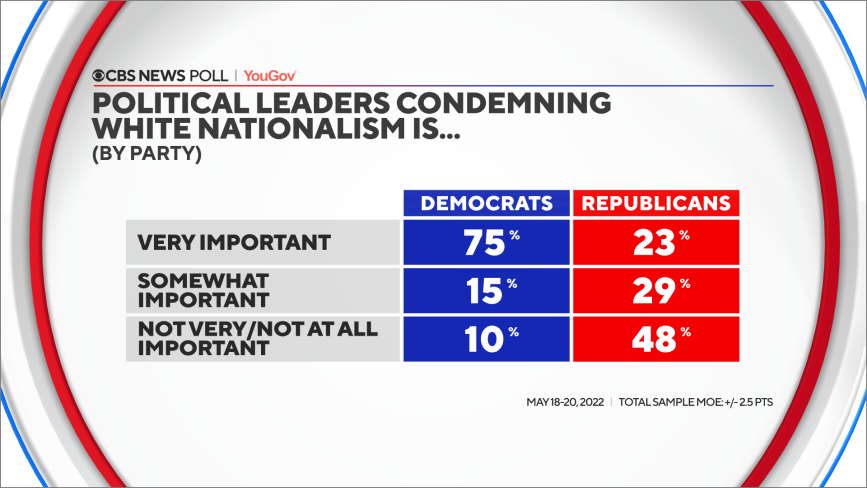 Republicans tend to see America’s changing diversity as neither good nor bad, but those who take a position tend to say bad. Democrats (whose ranks are made up of more people of color) say it’s a good thing. 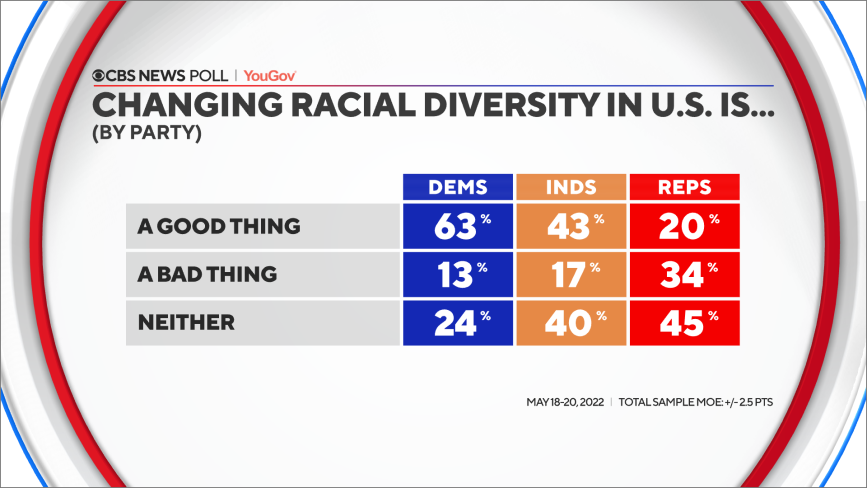 This CBS News/YouGov survey was conducted with a nationally representative sample of 2,041 U.S. adult residents interviewed between May 18-20, 2022. The sample was weighted according to gender, age, race, and education based on the U.S. Census American Community Survey and Current Population Survey, as well as to 2020 presidential vote. The margin of error is ±2.5 points.

A home made from shipping containers

The paper clip: A miniature piece of art