‘The family gene is incredibly strong’: Charles Dickens’ great-great grandsons says they bear an uncanny resemblance to their famous ancestor after posing for colourised photos of the author

Charles Dickens’s great-great grandsons have revealed an unprecedented insight into what the writer really looked like because of their ‘uncanny’ resemblance to him.

Museum historians have harnessed the striking likeness by imprinting Gerald and Mark Dickens’s complexions on to black-and-white portraits of their ancestor.

The remastered pictures show the Victorian author with fairly tanned skin in what the experts claim to be a ‘really accurate portrayal’.

The descendants hope the colourised photos will ‘bring Dickens to life’ and dispel the idea he was dull and dreary.

Gerald Dickens, 56, from Oxfordshire, told MailOnline: ‘It was always going to be an imperfect science to a certain extent.

‘But the Dickens gene throughout the family is very very strong and you can see Charles Dickens in many of the relatives and cousins right across the family.’

His cousin Mark Dickens, 64, from Sussex, who also dresses up in Victorian clothes occasionally and is Head of the Dickens family, agrees.

He said: ‘If you know the connection you can probably see it… if you wear Victorian costume, trying to look like him, then the resemblance can be very uncanny.’ 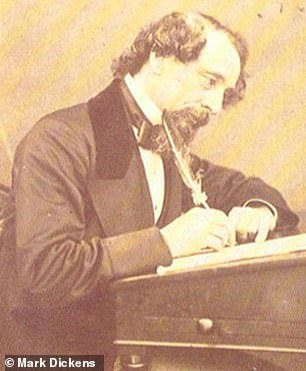 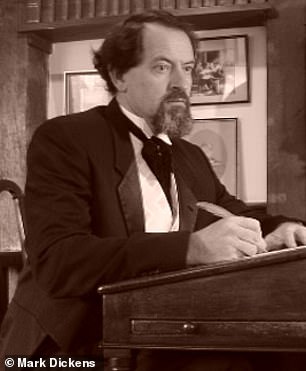 A striking resemblance: Mark Dickens (right) recreates an image of his great-great grandfather (left) to lay bare the likeness 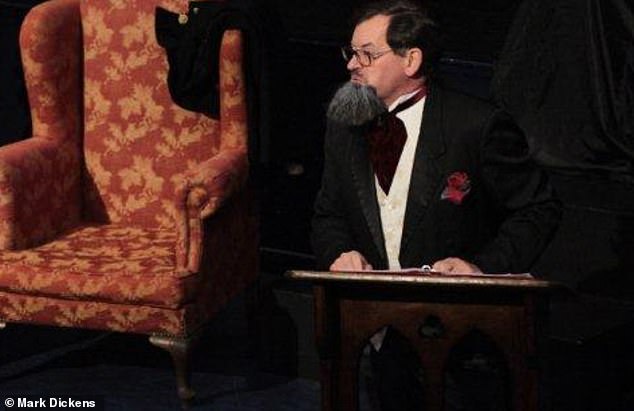 Mark said: ‘If you know the connection you can probably see it… If you wear Victorian costume, trying to look like, him then the resemblance can be very uncanny’ 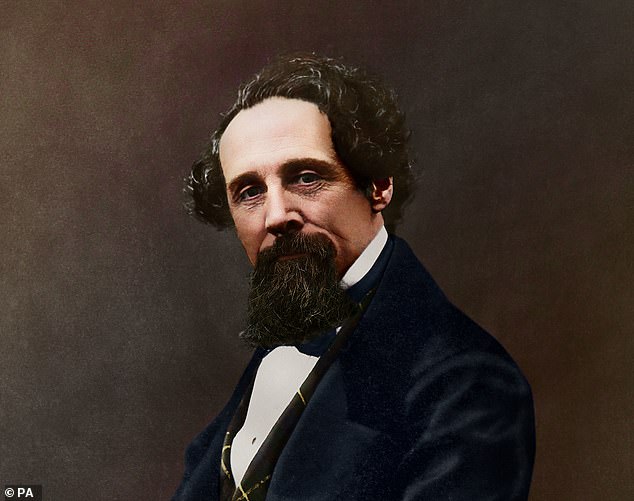 Experts at The Charles Dickens Museum in Holborn, London, researched the novelist’s fashion choices, skin tone and the complexion of his living descendants to create ‘a really accurate portrayal’ 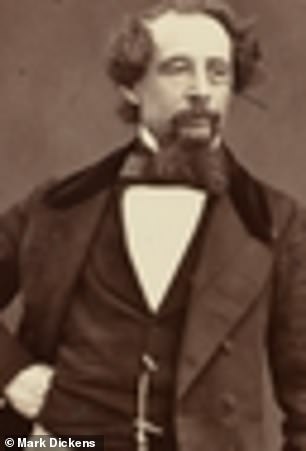 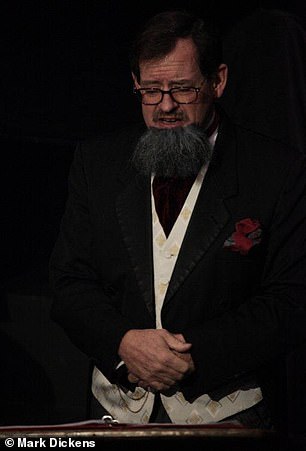 Charles Dickens’s genes (author, left)run strongly throughout his descendants, according to his family (Mark Dickens, right)

Mark revealed there are 237 members of the Dickens family, but only about 60 direct descendants alive today.

Eight black-and-white portraits of the writer have been colourised by the Charles Dickens Museum to celebrate the 150th anniversary of his death.

So far, the only indications of Dickens’s complexion are oil paintings, which Gerald believes were then ‘romanticised’ to please the client.

The great-great grandsons both hoped Dickens’s olive complexion would allow people to dispel the idea the author was a dull and dreary Victorian.

Gerald said: ‘Dickens was an outdoors man, he loved to walk he spent a lot of his time outdoors he would work from the Medway towns in Rochester and Chatham through to London.

‘When he was travelling he would make sure he got out and walked as much as he could.

‘So I guess taking that evidence you could assume there was a healthiness to his complexion, a sort of ruddiness as he spent a lot of time out in the sun.’ 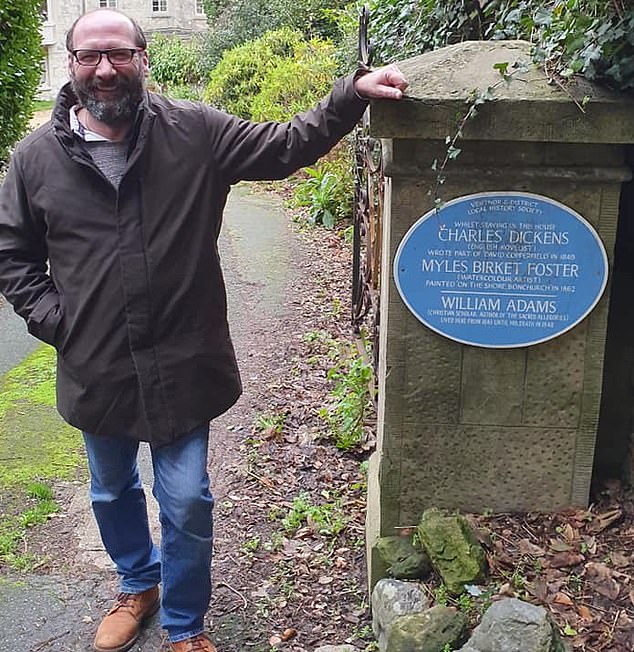 Gerald Dickens, the great great grandson of Charles, whose complexion was analysed to colourise photos of the novelist 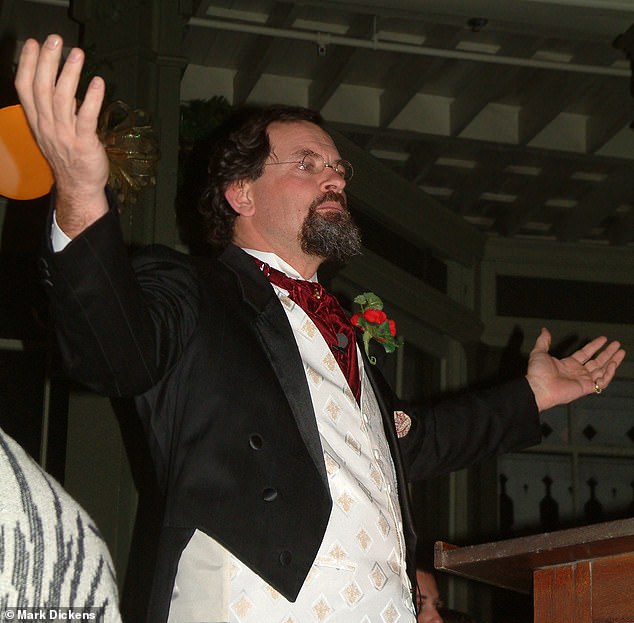 Mark Dickens, who regularly dresses up as his ancestor, posed to recreate portraits of Dickens in colour

Gerald writes his own Dickens spin-offs and has taken his stage show on tour across the UK.

But despite years of playing his great great grandfather, he said that posing for the colourised pictures afforded him an unprecedented connection.

He said: ‘It was a fascinating morning just sitting there being posed while he was looking at the original portrait, going backwards and forwards to his laptop getting me in the right pose, the exact lighting, just to capture the portrait as it was but in colour so you felt an incredible connection with Charles Dickens.

‘As I was sat exactly the way he was sat – the inclination of the head, or leaning on a hand, whatever it might have been.

‘It was amazing. Quite how he took the technical aspect and melded it together is beyond me but the actual being Dickens for that morning was an amazing experience.’

‘When I’m doing it on stage it’s a theatrical representation it has to work on many different levels… this was much much more personal as we were getting down to the fine fine aspects of how he looked.

‘It made everything I’ve done before on the theatrical side much more real to me.’ 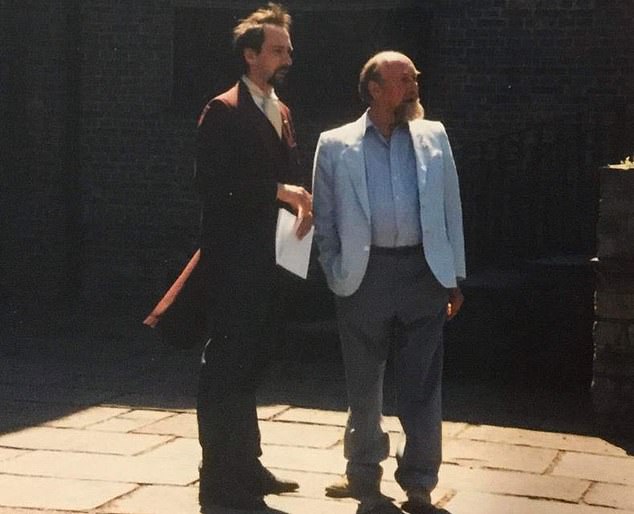 An old picture of Gerald (left) with his father, the great grandson of Dickens, who also bares a striking resemblance to the Victorian writer 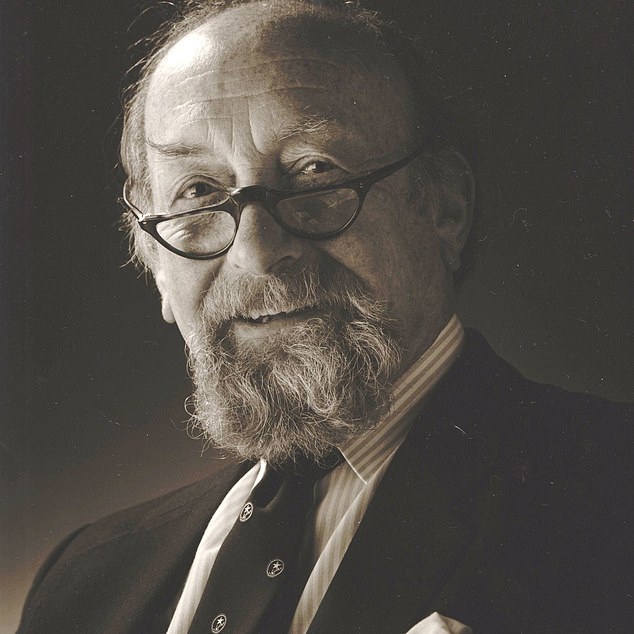 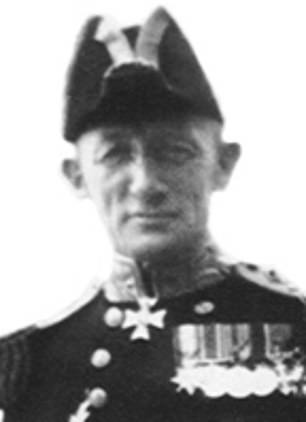 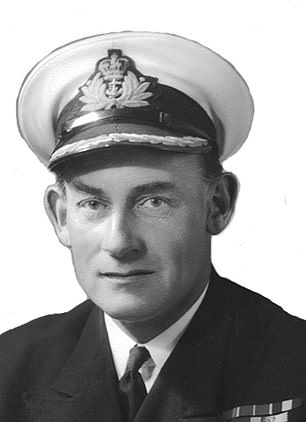 Mark was photographed by his son Ollie, rather than in a studio, because of the coronavirus lockdown.

But he still had to ensure the lighting and his pose exactly matched the portraits of Dickens.

Commenting on the finished works, he said: ‘You get a very different perception of what he looked like.

‘I didn’t know what I imagined. I’m extremely pleased with the result. I think it’s brilliant and it brings the person to life again.’

The first of eight images to be transformed ahead of the 150th anniversary of the author’s death shows a 47-year-old Dickens wearing an ‘ostentatious’ patterned waistcoat, textured navy jacket and a bow tie.

Experts at The Charles Dickens Museum in Holborn, London, researched the novelist’s fashion choices, skin tone and the complexion of his living descendants to create ‘a really accurate portrayal’, curator Frankie Kubicki said.

The museum has been shuttered by the lockdown, but hope to commemorate the anniversary of the author with the major exhibition when it is allowed to reopen.