A child receiving treatment in the oncology ward of the Royal Children's Hospital in Melbourne has tested positive for coronavirus.

Victorian Health Minister Martin confirmed on Monday morning that the child has been receiving treatment for some time at the hospital and that it is still unclear yet how they were infected with the virus. 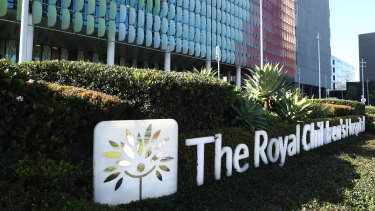 "I understand the child has been in hospital for quite some time."

Mr Foley added that staff and patients were being tested for COVID-19 and the hospital had not been able to "identify particulars of where the young child seemingly picked up the virus."

The condition of the child is not yet known. The Royal Children's Hospital has been contacted for comment.

The outbreak at the Royal Children's Hospital follows reports a small number of Australian children being infected with the COVID-19 developing a rare, life-threatening inflammatory condition.

Last month, a Victorian child with a rare inflammatory illness linked to coronavirus was admitted to the intensive care unit at Monash Children's Hospital with a severe immune response condition known as paediatric multi-system inflammatory syndrome, or PIMS-TS.

The boy was one of the first Australian children to present with the condition. Doctors say there have been a tiny number of confirmed PIMS-TS cases nationwide, with a small number still under investigation. The nine-year-old boy made a full recovery.

PIMS-TS is an extremely rare illness that involves swelling of blood vessels in the body. It can trigger a temperature, rash, or swollen glands in the neck.

While children have largely been spared from the worst health outcomes of coronavirus, in April this year a cluster of cases of PIMS-TS among children in Britain prompted an urgent alert to doctors across the world.

The condition is similar to Kawasaki disease, a rare paediatric multi-system inflammatory syndrome that has similar symptoms of fever and peeling skin.

At least three children globally have died after developing the disease.