China is criticised for banning Tiananmen vigil in Hong Kong

Hong Kong’s Beijing-backed government has been accused of ‘stifling freedom of expression’ of its people after police banned an upcoming vigil which will mark the 31st anniversary of the Tiananmen crackdown.

Residents in the Asian financial hub have mourned the victims of the bloody event yearly since 1990, and this is the first time the city will not be allowed to hold the commemoration.

The city’s police rejected permission for this year’s rally, claiming it would ‘constitute a major threat to the life and health of the general public’ amid the coronavirus pandemic, according to a letter of objection to organisers obtained by AFP. 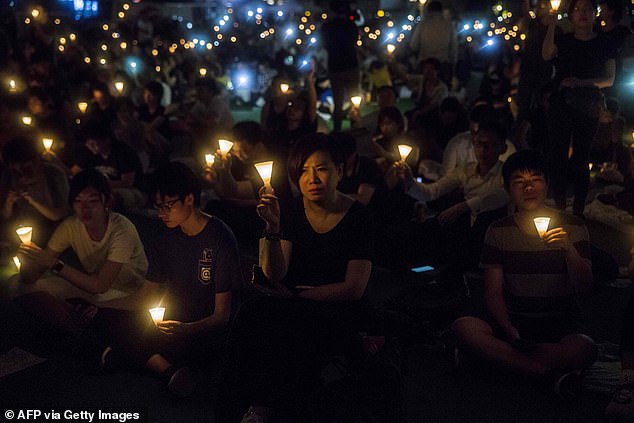 The candlelight June 4 vigil usually attracts huge crowds and is the only place on Chinese soil where such a major commemoration of the anniversary is still allowed. The file picture taken on June 4, 2019 shows people holding candles during a Tiananmen Square vigil in Hong Kong 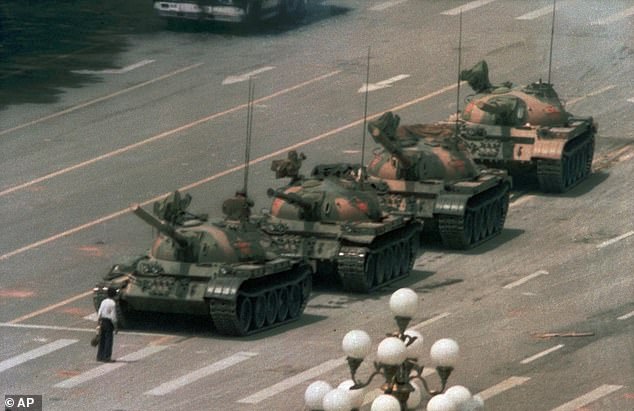 Hong Kong police on Monday banned an upcoming vigil marking the Tiananmen crackdown anniversary over health concerns amid the coronavirus pandemic. The picture was taken by AP photographer Jeff Widener from a sixth-floor balcony of the Beijing Hotel near Tiananmen 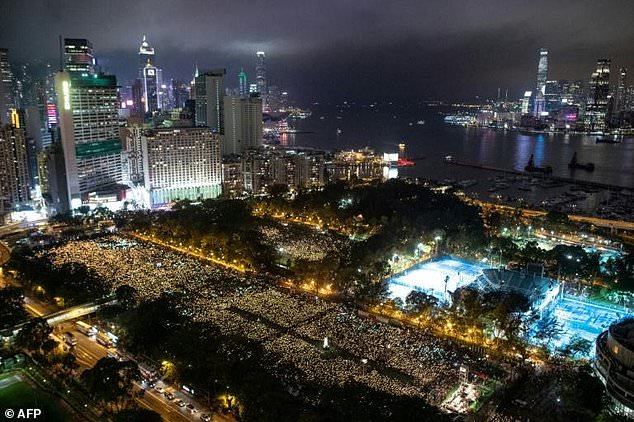 Last year’s gathering was especially large and came just a week before seven months of pro-democracy protests and clashes exploded onto the city’s streets. Candlelight vigils in Hong Kong marking the anniversary of the Tiananmen crackdown in Victoria Park

The candlelight June 4 vigil usually attracts huge crowds and Hong Kong has been the only place on Chinese soil where such a major commemoration of the anniversary is still allowed.

Last year’s Tiananmen vigil was especially large and came just a week before seven months of pro-democracy protests and clashes exploded onto the city’s streets, sparked initially by a plan to allow extraditions to the authoritarian mainland.

The ban on this year’s rally comes as waves of pro-democracy protests have been erupting in Hong Kong for nearly two weeks after China’s rubber-stamp parliament approved a controversial national security law for the former British colony.

‘COVID-19 must not be used as an excuse to stifle freedom of expression,’ said Joshua Rosenzweig, Amnesty International’s East and South East Asia Deputy Director.

‘In recent weeks, we have seen the Hong Kong police repeatedly clamp down on peaceful protests with arbitrary mass arrests and excessive force – including the use of tear gas and pepper pellets.

‘With this ban, and a disastrous national security law looming, it is not clear if Hong Kong’s Tiananmen vigil will ever be allowed to take place again.’ 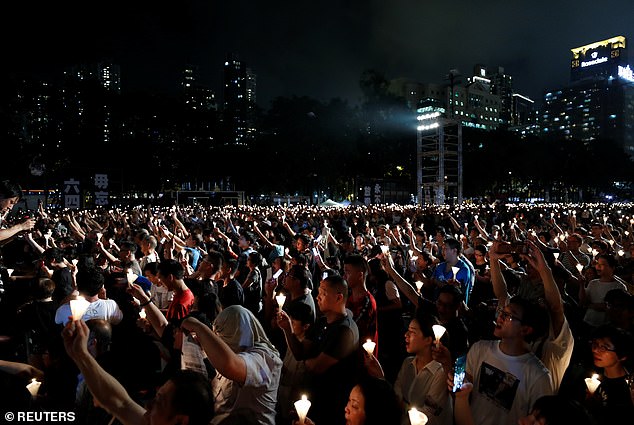 The picture taken on June 4, 2019, shows thousands of people take part in a candlelight vigil to mark the 30th anniversary of the crackdown of pro-democracy movement in Tiananmen 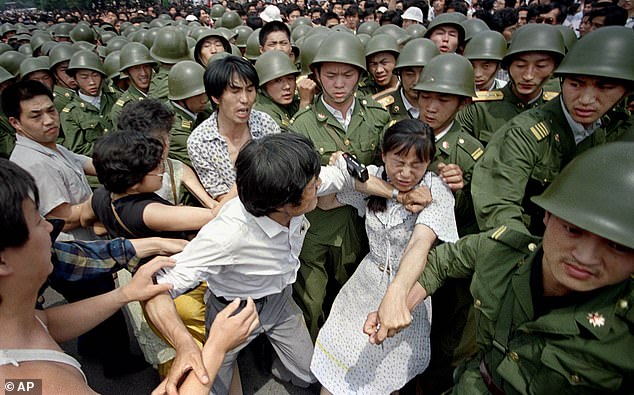 FILE: In this June 3, 1989 file photo, a young woman is caught between civilians and Chinese soldiers, who were trying to remove her from an assembly near the Great Hall of the People

Johnny Patterson, Director of UK-based human rights group Hong Kong Watch, said the pandemic ‘has been consistently used as a pretext to crackdown on the rights of Hong Kongers.’

‘First, with the world distracted, the Chinese government has fast-tracked the national security law; now, for the first time, the peaceful candlelit Tianenman vigil has been banned.

‘The sadness is that, once the national security law is passed, this vigil may never be legal again,’ he warned.

Hong Kong has managed to keep the virus mostly in check, with just over 1,000 infections and four deaths. Bars, restaurants, gyms and cinemas have largely reopened in recent weeks.

Organisers of the annual event accused police of using the virus as an excuse to ban the rally.

‘I don’t see why the government finds political rallies unacceptable while it gave green lights to resumption of schools and other services ranging from catering, karaoke to swimming pools,’ said Lee Cheuk-yan, chairman of the Hong Kong Alliance which has organised every vigil since 1990.

The alliance called on residents to instead light a candle at 8pm on Thursday and observe one minute of silence wherever they can.

‘If we are not allowed to light a candle at a rally, we will let the candles be lit across the city,’ Lee said. 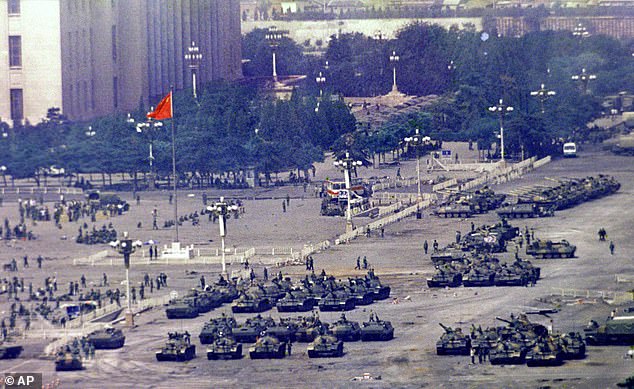 Organisers of the annual event accused police of using the virus as an excuse to ban the rally. FILE: In this June 5, 1989 file photo, Chinese troops and tanks gather in Beijing, one day after the military crackdown that ended pro-democracy demonstration on Tiananmen Square 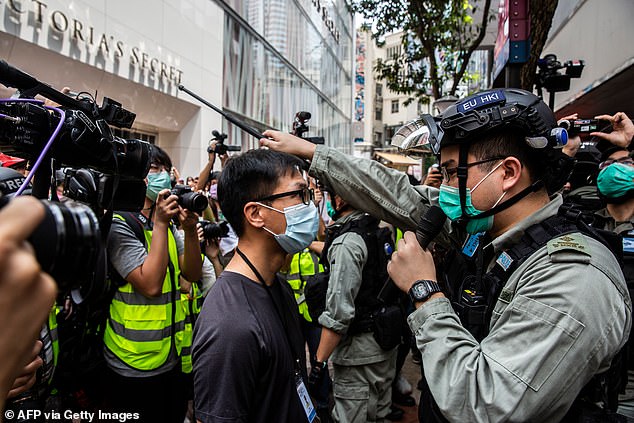 The ban on this year’s rally comes as waves of pro-democracy protests have been erupting in Hong Kong for nearly two weeks after China’s rubber-stamp parliament approved a controversial national security law for the former British colony. Pictured, police officers are seen guarding an MTR station exit near the Legislative Council in Hong Kong on May 27

Lee also vowed that the alliance would continue to chant the slogan ‘end one-party rule’ during the commemoration despite Beijing’s recently announced plans to impose a law criminalising acts of subversion, secession, terrorism and foreign interference.

Beijing says the law – which will bypass Hong Kong’s legislature – is needed to tackle ‘terrorism’ and ‘separatism’.

Opponents fear it will bring mainland-style political oppression to a business hub supposedly guaranteed freedoms and autonomy for 50 years after its 1997 handover to China by Britain.

The 1989 Tiananmen crackdown occurred when China’s leaders sent tanks and troops to quell student protesters calling for democracy and an end to corruption.

Hundreds were killed, with some estimates suggesting that more than 1,000 perished. 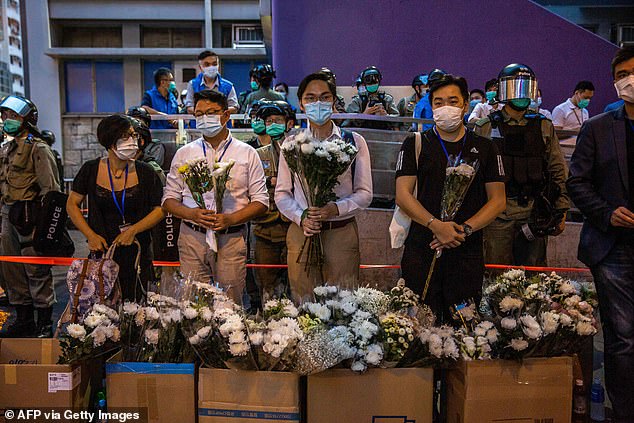 Pictured, police personnel (back) stand guard outside Prince Edward MTR underground train station as people (front) wait to collect flowers from passers by in Hong Kong on May 31 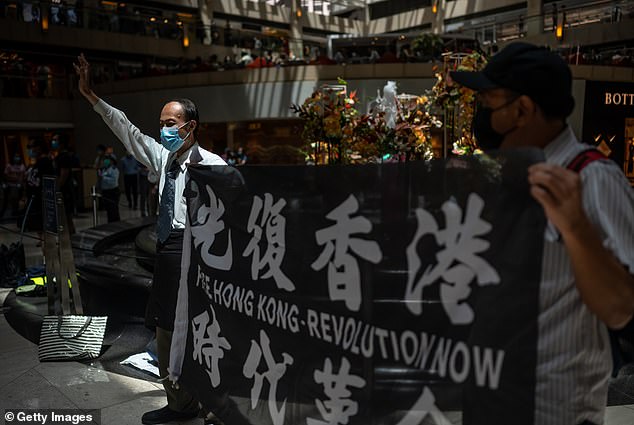 Three decades on, it remains one of the most sensitive subjects in mainland China and any mention of it is strictly censored.

But in Hong Kong the memory of what happened is kept alive.

The annual vigils swelled before the 1997 handover to China and have become especially charged in recent years as many Hong Kongers chafe under Beijing’s rule.

This year’s anniversary is likely to coincide with Hong Kong’s pro-government stacked legislature voting for a law banning insults to China’s national anthem.