Beijing: China's economic recovery disappointed in the third-quarter, growing 4.9 per cent from a year earlier and missing analyst expectations, data from the National Bureau of Statistics showed on Monday.

The growth was slower than the 5.2 per cent forecast by analysts in a Reuters poll, and followed 3.2 per cent growth in the second quarter.

The better results were expected after consumers returned to shopping centres and major trading partners reopened for business, shaking off the record coronavirus-led slump seen earlier this year. 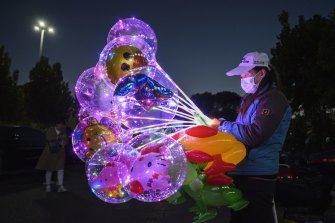 A woman wears a protective mask as she sells balloons outside a local shopping centre in Beijing, China. Credit:Getty Images

The economy grew 0.7 per cent in the first nine months from a year earlier, the data showed.

The world's second-largest economy has been steadily recovering from decades-low growth seen in the first months of the year caused by the coronavirus shock.

The government has rolled out a raft of measures, including more fiscal spending, tax relief and cuts in lending rates and banks' reserve requirements to revive the coronavirus-hit economy and support employment. On a quarter-on-quarter basis, GDP rose 2.7 per cent in July-September, the bureau said, compared with expectations for a 3.2 per cent rise and an 11.5 per cent rise in the previous quarter.