City of Melbourne threatens to fine protesters for ‘excessive noise’

City of Melbourne has been threatening to fine people protesting against treatment of refugees and asylum seekers under bylaws designed to stop buskers disturbing the peace.

Victoria Police officers have worked with council officers to penalise the protesters under a little-known bylaw that restricts the use of "excessive noise" that is "capable of interfering with the reasonable comfort of any person who may be in the vicinity of [a] public place". 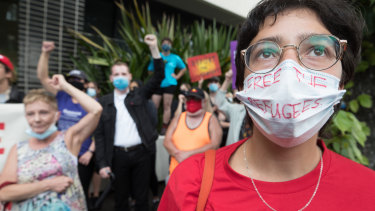 Protesters have been protesting outside the Park Hotel regularly.Credit:Jason South

The practice has been described as outrageous by advocates who say the right to protest is being undermined by a misuse of the council bylaws.

Protesters have been holding daily rallies outside the Park Hotel, where more than 60 men who were medically evacuated to Australia from detention in Manus Island and Nauru are being held.

The men were transferred amid stormy protests to the Park Hotel from the Mantra Bell City Hotel, where they had been locked up for more than a year.

On Wednesday, protesters demonstrated outside 1 Treasury Place, home to the Department of Premier and Cabinet and the office of Premier Daniel Andrews, calling for the men's release.

After the protest, a City of Melbourne officer – supported by a crowd of Victoria Police officers – handed two protest organisers notices to comply with the bylaws, and told them they would be fined $500 each.

Apsara Sabaratnam, who ran as the Greens' lord mayoral candidate in the November council elections and was one of those issued a notice, said she would refuse to pay a fine.

"It's very important for people like ourselves to stand our ground and the right to protest is an important right," she said. "And when we give up some ground, what we actually doing is giving up power."

Flemington Kensington Community Legal Centre executive officer Anthony Kelly said even if only a few people were fined, it could have a deterrence effect on other protesters.

"My opinion is that it's inappropriate and a misuse of the laws," he said. "It's always dangerous when any law is used outside its original intended purpose."

The City of Melbourne bills itself as a Refugee Welcome Zone, that takes a whole-of-council approach to supporting diverse communities. More than 50 per cent of the municipality's residents were born overseas and speak a language other than English at home.

A council spokeswoman said the matter would be reviewed internally before any fine was issued.

"If the use of megaphones or amplifiers at protests creates excessive noise and becomes a public amenity issue, our officers can issue verbal and written warnings, and as a last resort, an infringement," she said.

"We give a number of verbal warnings before any infringements are issued. Issuing fines at demonstrations is not a regular occurrence and we respect the right to protest."

A spokeswoman for Victoria Police said the City of Melbourne’s local laws restrict the use of amplifier devices to make noise without a permit.

"Victoria Police works closely with all local councils right across the state to enforce local bylaws," she said.