Social distancing barriers in a city centre have been branded ‘madness’ over fears they are dangerous for partially-sighted people.

Councillor Andrew Jarvie said the grey and white installation in Inverness was put up with ‘utter disregard’ for anyone with a visual impairment.

Months ago red and white barriers were constructed as part of a £2million Spaces for People programme amid the coronavirus pandemic.

It comes after similar projects saw the creation of Low Traffic Neighbourhoods (LTNs) and cycleways to discourage use of public transport across the UK during the pandemic.

Cllr Jarvie said the change from red barriers to grey and white would put those with partial sight at risk. 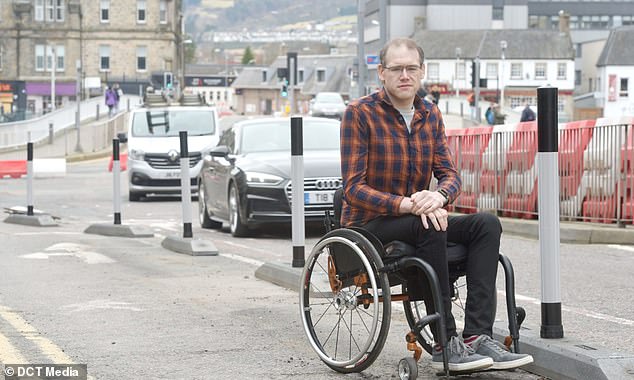 A previous project was scrapped because the contrast of colours between the road and pavement was insufficient, he said.

Mr Jarvie added: ‘This is many steps backwards. The colour of these bollards is the exact same colour and shade as the road and white lines. That is before any consideration of the visibility at night.’

In a letter to Malcolm Macleod, Highland Council’s executive chief officer for infrastructure and development, Mr Jarvie also claimed the project is being rolled out ‘in secret’ without councillors’ approval. 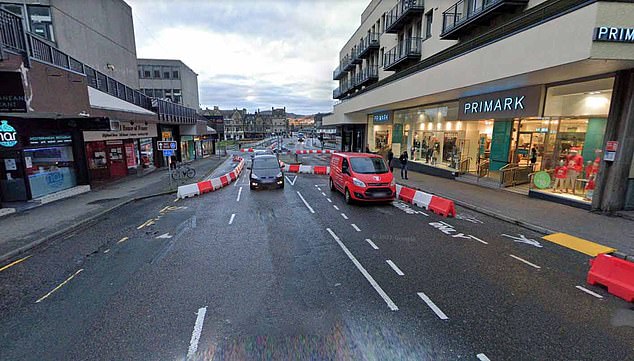 Before: Months ago red and white barriers were constructed as part of a £2million Spaces for People programme amid the coronavirus pandemic

He said at the last Inverness City Committee, members voted for officers to develop design options for consideration at a future meeting.

He added: ‘Some visualisations were presented to us of what “could” happen.

They were removed after a backlash from business owners, forcing the council to become the latest authority to cave to pressure from locals and remove the barriers.

Authorities across the UK have come under fire for erecting barriers in busy town and city centres.

The barriers, designed to make more room for pedestrians, have squeezed drivers out from city centres and make it harder for buses and taxi drivers to navigate the narrower streets.

It comes after barriers were removed from a street in Melton, Leicestershire, and also from Deptford High Street in south east London.

‘I didn’t agree with it, particularly as this council progresses something as vital as active travel in such a piecemeal fashion.

‘But at least I left that meeting with the knowledge that this wouldn’t evolve further without member… agreement.’

‘However even those who agreed with this project commented on the black and white bollard design and raised concerns about the impact this could have – particularly on those with visual impairments.

‘I am at a total loss why this entire programme of works, which councillors are being asked to celebrate, has started and continues in such secrecy,’ he continued.

‘I keep getting my updates on this programme from social media rather than this council. It is completely inexcusable for councillors to not even be aware such a large project is under way until it is done – again.’

He said the changes recognise comments from the public and councillors and are compliant with safety guidelines.

‘In terms of those with visual impairments, additional space has been provided for both pedestrians and cyclists. It is envisaged that users will continue to use the existing footway provision, except where required to make way for social distancing.

‘This is not being done piecemeal but will be part of a clearly thought out strategy, which will have full involvement from members and the public. All of the proposals will be fully debated at committee in an open and transparent way.

‘Clearly permanent interventions will allow designs to consider all aspects and consultations with all groups will be essential to deliver designs that address all needs.

‘Temporary interventions are inevitably a compromise – they are not perfect but are a proportionate reaction to the pandemic.’

The Spaces for People fund was launched last April to help implement measures to ensure people can walk, wheel or cycle, while physically distancing and remaining safe from traffic.

The Highlands was allocated £2 million under the scheme and councillors last year pressed for the temporary measures to go further. 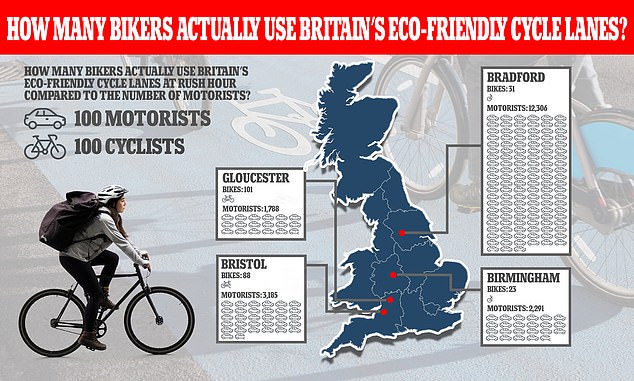 New eco-friendly cycle lanes are seeing one biker for every 400 vehicles, spelling embarrassment for the Government’s £250million ‘green transport revolution’

Bikes make up just 1.75 per cent of total traffic on roads which lost a carriageway to a cycle-friendly route, research showed.

The research suggested cycle lanes may be doing more harm than good by increasing congestion levels and making pollution worse.

The Department for Transport has promised to spend £2billion on cycle lanes in the next five years.

Of that, £250million has already been released to councils in England for traffic calming schemes – including pop-up cycle lanes and ‘low traffic’ neighbourhoods.

But critics say the measures have blocked emergency response vehicles and brought gridlock to towns and cities across the country. 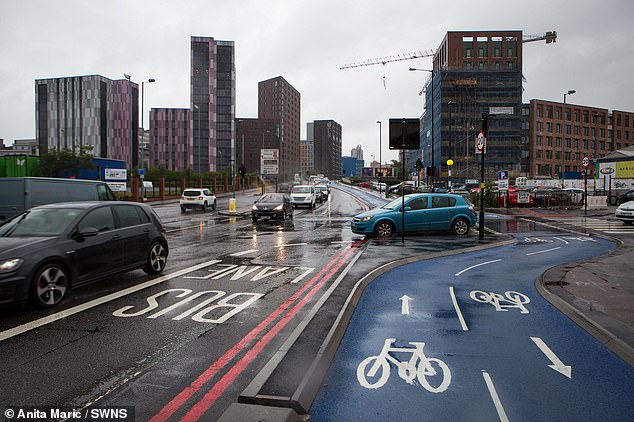 The measures were escalated when the coronavirus lockdown brought the country to a halt last March, as temporary cycle lanes were brought in to help Britons avoid public transport.

Research conducted by The Sunday Telegraph counted the amount of bikes on these newly-introduced lanes in eight cities – compared to the number of motor vehicles.

The survey was conducted at the morning and evening rush hours – for a total of five hours – and there were no adverse weather conditions that may have put cyclists off.

In Bradford – where an entire lane of a three-lane road was lost to a bike route – a massive 12,306 motor vehicles were counted – compared to just 31 bikes.

Traffic jams of up to 30 minutes were also reported at these peak times – with 30-car queues seen.

In Harrow in London, one cycle lane has seen just 98 cyclists per day in October. Others in the same borough saw 77 and 61 cyclists every 24 hours throughout the same month. 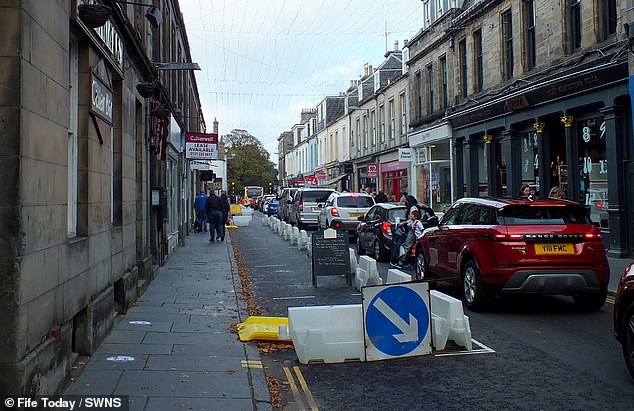 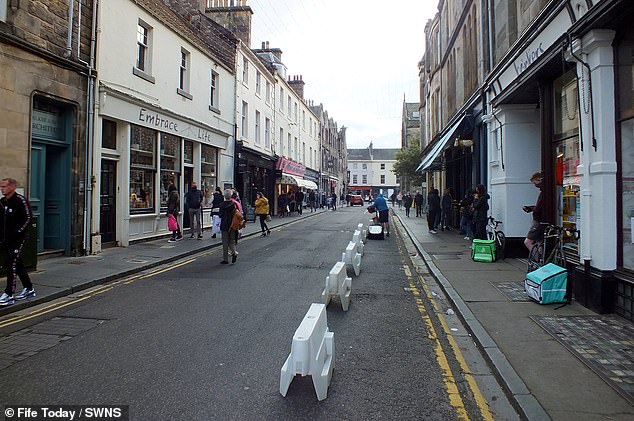 Fife Council installed the barriers on Market Street (pictured), in St Andrews – the town’s busiest thoroughfare – but had to remove them after a backlash from business owners

A Department for Transport spokesman said: ‘The majority of people are supportive of measures to encourage cycling and walking and our active travel funding has led to the creation of new schemes across the country, delivering real benefits for pedestrians, cyclists and motorists.

‘However, some changes, both in London and further afield, have not been as successful, which is why the Transport Secretary has written to local authorities, making clear that their schemes must benefit the whole community or funding will be withheld.’

The Government is planning hundreds of miles of new cycle lanes as part of its new plan to encourage people onto two wheels during the pandemic.

Under the Department for Transport’s ‘active travel’ scheme, councils have already been granted £42million in taxpayer money to turn over vast sections of road to pedestrians and bikes, and in some cases, to close them off altogether.

Rather than improving local areas, opponents say the schemes – which are part of the £2billion plan – have worsened gridlock and pollution, caused delays for 999 services and hurt firms which rely on trade from passing traffic.