A defamation trial between two former partners has been halted to see if a key document could be allowed into evidence.

The delay on Thursday means Constantine Arvanitis was spared the prospect of a cross-examination on his sexual activities by the lawyer of his ex-girlfriend Selina Holder until next week at the earliest. It is also likely to stretch the judge-only trial beyond its allotted eight days. 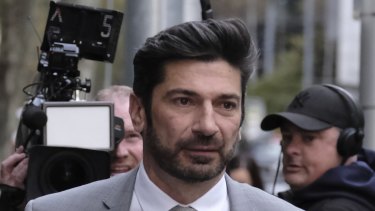 Mr Arvantis is suing over a letter allegedly sent to his new fiancee describing him as a violent sex addict and also over a separate legal document that makes serious allegations of criminal behaviour.

Among the allegedly defamatory imputations in the document, which was sent by Ms Holder to Mr Arvanitis’ future sister-in-law, are that he was a thief, a stalker, a prescription-drug dealer and a liar.

Mr Arvanitis denies the claims and has told the court that he has never been convicted of any offence. The document forms a key part of Mr Arvanitis’ case that he was defamed by Ms Holder.

However, his senior counsel, Paul Hayes, QC, was unable to tender the document as evidence on Thursday, with a separate court proceeding yet to decide if it could be released. 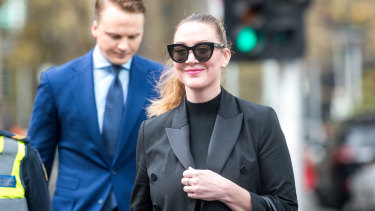 Mr Hayes argued before Judge Julie Clayton that the defamation trial should be suspended until a decision was made because the issue was so important to his case.

He said that his client had already won permission to use the document as evidence, however, Ms Holder’s lawyers had later appealed that decision.

He said the appeal, to be heard on Friday afternoon, was “hopeless” and nothing more than a “regrettable, desperate attempt” to derail the defamation trial.

“To call witnesses would be grossly unfair before the plaintiff has finished his evidence,” he said.

“Given the importance of this document, I need to appear in the appeal. We will have to have our skates on. He [Mr Arvanitis] can’t leave anything to chance.”

The Age is prevented from further describing the separate court proceeding or the defamatory document for legal reasons.

“[Ms Holder] wanted to lodge an appeal so that nobody could use the [document] in this proceeding,” he said.

Ms Holder’s lawyer, Barrie Goldsmith, rejected suggestions that he was attempting to sabotage the trial, blaming Mr Arvanitis and his lawyers for the delay.

“This application was made [for access to the document] last week,” he said.

“This case has been very active and contentious since the end of 2019. That submission I find to be absolutely appalling.”

Mr Goldsmith said the trial should continue as he was “geared up” to cross-examine Mr Arvantitis on behalf of Ms Holder.

He said he planned to question Mr Arvantitis for two days. Mr Arvanitis gave evidence-in-chief on Tuesday and Wednesday, outlining a history of abusive behaviour by Ms Holder.

“It is in the interest of justice that I be allowed to cross-examine the plaintiff with the aim of rebutting the very serious and scurrilous evidence that he gave against my client,” he said.

Judge Clayton made her feelings clear about the delay, telling both parties that she wanted to continue as soon as possible.

“You’re both casting blame on the other side and I just want to get on with this case,” she said.

Mr Hayes told the court that he would be seeking a prompt order to release the document so the trial could resume on Monday.

“We’re not seeking to have this adjourned off until the never-never,” he said.

After considering the arguments, Judge Clayton said she had “reluctantly concluded” that the trial should be adjourned until Monday.