Colombia, strained by pandemic and poverty, explodes in protest

Bogota: A teenager shot to death after kicking a police officer. A young man bleeding out on the street as protesters shout for help. Police firing on unarmed demonstrators. Helicopters swarming overhead, tanks rolling through neighbourhoods, explosions echoing in the streets. A mother crying for her son.

“We are destroyed,” said Milena Meneses, 39, whose only son, Santiago, 19, was killed in a protest over the weekend. 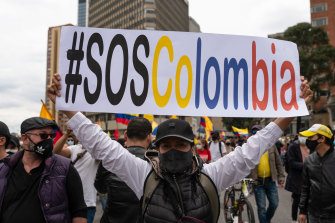 A demonstrator holds a banner during a protest against the government’s tax reforms in Bogota, Colombia.Credit:Bloomberg

Colombians demonstrating over the past week against the poverty and inequality that have worsened the lives of millions since the COVID-19 pandemic began have been met with a powerful crackdown by their government, which has responded to the protests with the same militarised police force it often uses against rebel fighters and organised crime.

This explosion of frustration in Colombia, experts say, could presage unrest across Latin America, where several countries face the same combustible mix of an unrelenting pandemic, growing hardship and plummeting government revenue.

“We are all connected,” said León Valencia, a political analyst, noting that past protests in Latin America have been contagious, jumping from country to country. “This could spread across the region.”

After seven days of marches and clashes that turned parts of Colombian cities into battlefields, demonstrators breached protective barriers around the nation’s Congress, attacking the building before being repelled by police. 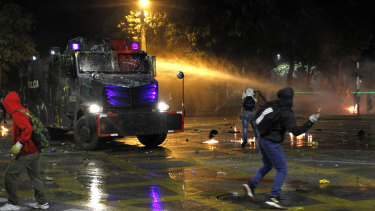 Protesters throw objects to an anti-riot tank as it sprays water during a national strike on May 5 in Medellin, Colombia.Credit:Getty Images

Several people in the political party of President Iván Duque are asking him to declare a state of siege, which would grant him broad new powers.

The clashes have left at least 24 people dead, most of them demonstrators, and at least 87 missing, and they have exacerbated the anger with officials in the capital, Bogota, who many protesters say are increasingly out of touch with people’s everyday lives.

On Wednesday, Helena Osorio, 24, a nurse, stood at the edge of the rally in Bogota.

“I am in pain for Colombia, I am in pain for my country,” she said. “All that we can do to make ourselves heard is to protest,” she went on, “and for that, they are killing us.”

The marches began last week after Duque proposed a tax overhaul meant to close a pandemic-related economic shortfall. By Sunday, amid demonstrations across the country, he rescinded the plan. 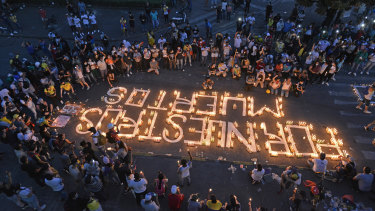 Demonstrators take part in a candlelight vigil for the victims of the past days of protests in Cali, Colombia.Credit:Getty Images

But the unrest has not abated. Instead, fuelled by outrage at the government’s response, the crowds have only grown.

Demonstrators now include teachers, doctors, students, members of major unions, long-time activists and Colombians who have never before taken to the streets.

Truckers are blocking major highways. And on Tuesday, demonstrators in the capital burnt buses and lit more than a dozen police stations on fire, singing the national anthem, yelling “assassins!” and sending officers running for their lives.

“This is not just about the tax reform,” said Mayra Lemus, 28, a school teacher. “This is about corruption, inequality and poverty. And all of us young people are tired of it.”

The demonstrations are, in part, a continuation of a movement that swept South America in late 2019, as people took to the streets in Bolivia, Chile, Colombia, Ecuador, Peru, Nicaragua and elsewhere.

Each country’s protest was different. But in all of them, people voiced their grievances over limited opportunity, widespread corruption and officials who appeared to be working against them.

Then came the pandemic. Latin America was hard hit by the virus in 2020, with cemeteries filling past capacity, the sick dying while waiting for care in hospital hallways, and family members spending the night in lines to buy medical oxygen in an attempt to keep loved ones alive.

The region’s economies shrank by an average of 7 per cent. In many places, unemployment, particularly among the young, spiked.

While wealthier countries prepare to reopen, a deadly variant of the virus originally found in Brazil, called P.1, has ripped through Latin American populations, recently pushing many countries to their worst daily death tolls.

For months, as people stayed inside or struggled to survive amid dwindling incomes, the anger and frustration that had been manifested during protests in 2019 was still simmering.

Then, in Colombia, Duque announced his tax reform, one of the first attempts in the region to try to deal with the economic shortfall exacerbated by the pandemic. While the measure would have kept in place a critical pandemic-era cash subsidy, it would have also raised prices on many everyday goods and services.

Soon, long-brewing resentment spilled over into the streets.

On Tuesday, Duque said he would open a national dialogue to find solutions to fiscal problems and other challenges.

“It is vital to have all the institutions, parties, the private sector, governors, mayors and leaders of civil society” in conversation he said. “The results of this space will be translated into initiatives we can act upon quickly.”

But the call for national dialogue was similar to one he made in 2019, and many civil society groups have said that discussion produced few results. 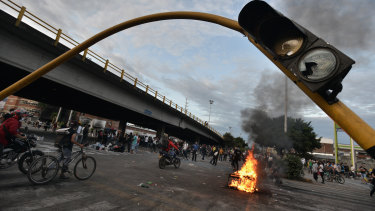 Despite the government announcing the withdrawal of an unpopular tax reform bill and the resignation of the finance minister, social unrest continues in Colombia. Credit:Getty Images

Duque, a conservative, has lost significant popularity since the beginning of the pandemic, according to polling from the firm Invamer. And analysts say he is at his weakest point since he came to office in 2018.

The police and military response has made a national conversation built around compromise extremely difficult, said Sandra Borda, a political analyst and columnist for the newspaper El Tiempo.

“He has no political capital,” she said. “People cannot sit down to dialogue with a government that by night kills people who protest and by day extends a hand in conversation.”

“I think there will be a lot of upheaval,” she went on. “And I think this next year and a half will be terrible for the government, terrible for Colombian society and with very few long-term solutions.”

Colombia will hold presidential elections in 2022. For decades, the country has elected conservative leaders. But Gustavo Petro, a left-wing former mayor of Bogota and former member of a demobilised guerilla group, now leads in the polls. Duque, limited by law to one term, cannot run for reelection.

The government’s response to the recent protests could be a significant factor in next year’s vote.

On Saturday night, Santiago Murillo, 19, a student in his final year of high school, was headed back to the home he shared with his parents in the midsize city of Ibague, and crossed through a crowded protest.

Two blocks from home, according to his mother, shots rang out and he fell to the ground. In a video, a witness can be heard shouting.

A passing delivery man loaded Murillo onto his motorbike and rushed him to a clinic. There, his mother’s anguished cries were captured on tape. “Son, take me with you! Son, I want to be with you!”

Doctors could not revive him, and residents of Ibague held a protest vigil in his name the next day.

“I asked them to protest civilly,” said his mother, “in peace”.