'Computer genius' Carlos Acutis is to be beatified by the Vatican

A British-born Italian teenager who dedicated his short life to spreading the faith online and helping the poor will be beatified by the Catholic Church today.

That leaves him just one miracle away from becoming the world’s first millennial saint.

Internet and computer-mad youngster Carlo Acutis, who died of leukaemia in 2006 aged 15, was placed on the path to sainthood after the Vatican ruled he had miraculously saved another boy’s life.

The Vatican claims he interceded from heaven in 2013 to cure a Brazilian boy suffering from a rare pancreatic disease. 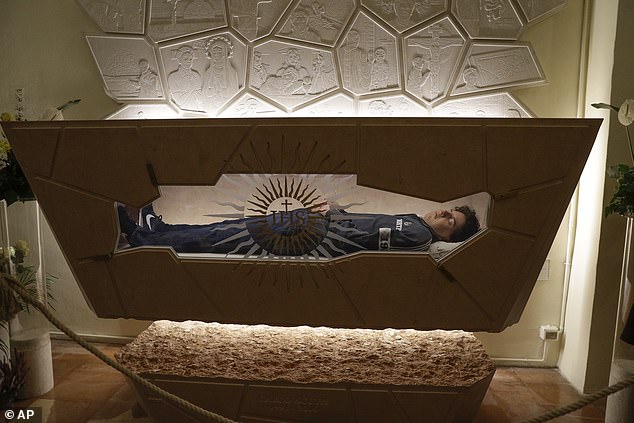 Fifteen-year-old Carlo Acutis, an Italian boy who died in 2006 of leukaemia, lies in state ahead of being beatified by Cardinal Agostino Vallini, in Assisi, Italy today 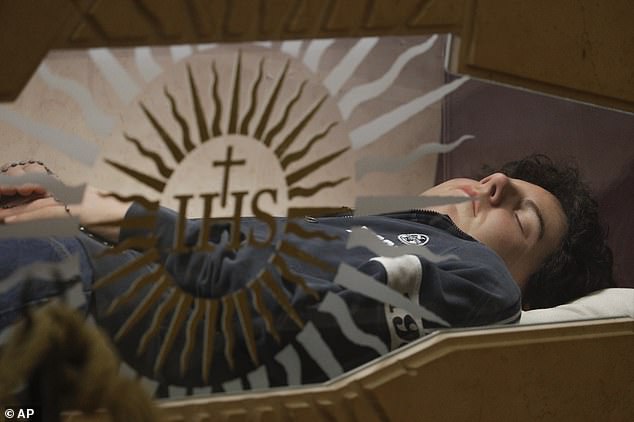 Acutis, an Italian boy who died in 2006 of leukemia, lies in state in Assisi, Italy this morning 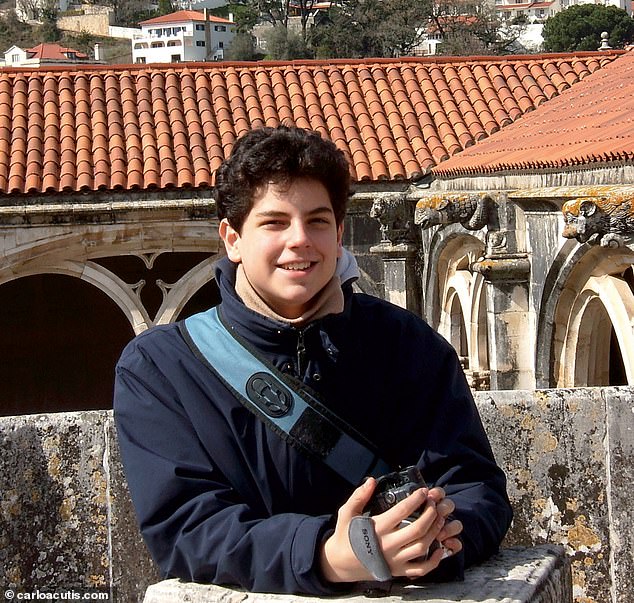 What are the five steps to becoming a saint?

Five-year wait: Five years usually needs to have passed after someone’s death for the process to begin. This allows for a period of reflection on the case.

Servant of God: The bishop of the diocese where the person has died investigates whether their life was holy enough to be deemed a ‘servant of God’.

Life of heroic virtue: The Congregation for the Causes of Saints looks at the case. If they approve it is passed onto the Pope, who declares the subject a person of ‘heroic virtue’.

Beatification: A miracle needs to happen to a person who has prayed to the person in question.

Canonisation: A second miracle is attributed to the person who has been beatified.

He will be beatified in Assisi, the home of his idol Saint Francis, who dedicated his life to the poor.

Some 3,000 people are expected to follow the ceremony on giant screens set up in five squares in the central Italian city.

Acutis, dubbed ‘the cyberapostle of the Eucharist’, was born in London to Italian parents, and moved to Milan with them as a young boy.

‘He was considered a computer genius… But what did he do? He didn’t use these media to chat, have fun,’ his mother Antonia Salzano said in an interview with Vatican News.

Instead, ‘his zeal for the Lord’ drove him to make a website on miracles, she said.

The millennial, whose body lies in state in Assisi, dressed in a tracksuit and trainers, also warned his contemporaries that the internet could be a curse as well as a blessing.

Pope Francis referred to him last year, in a warning to youngsters that social networks could foment hate.

‘(Acutis) saw that many young people, wanting to be different, really end up being like everyone else, running after whatever the powerful set before them with the mechanisms of consumerism and distraction,’ Francis said.

‘As a result, Carlo said, ‘everyone is born as an original, but many people end up dying as photocopies’. Don’t let that happen to you!’ he said.

Acutis was religious from a young age, despite his mother saying his family had rarely attended church.

When he wasn’t writing computer programmes or playing football, Acutis was known in his neighbourhood for his kindness to those living on society’s margins. 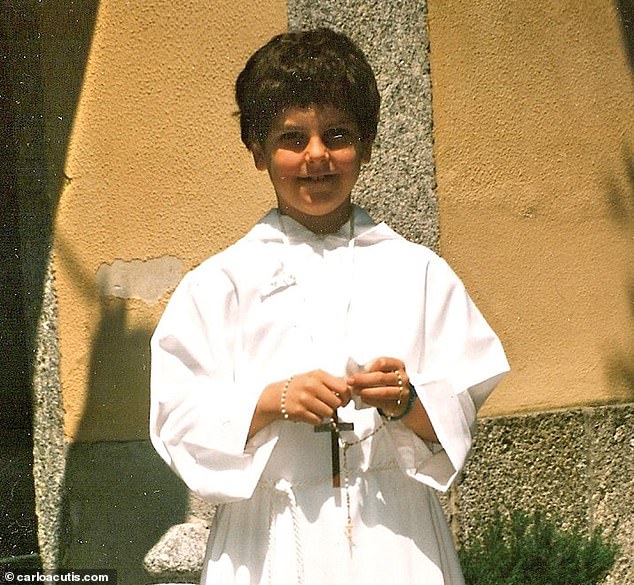 Carlo was a devout Christian (pictured) when he was alive and attended daily mass. Before he died, he set up a website where he researched and documented miracles attributed with the Eucharist

‘With his savings, he bought sleeping bags for homeless people and in the evening he brought them hot drinks,’ his mother said this week, according to the Catholic News Agency.

‘He said it was better to have one less pair of shoes if it meant being able to do one more good work,’ she said. 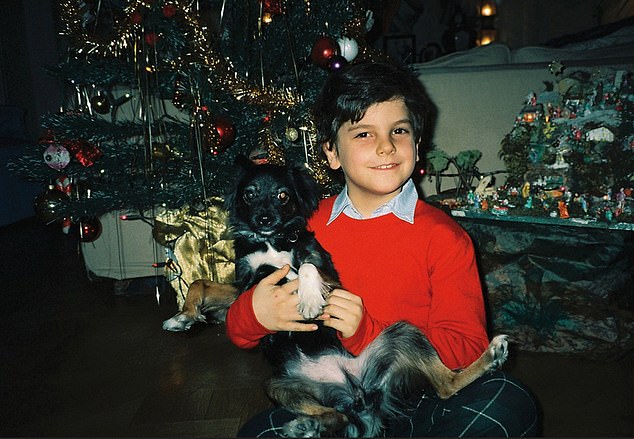 As well as being committed to his faith, Carlo also helped the homeless and stood up for bullied classmates at school. Pictured: Young Carlo with his dog at Christmas 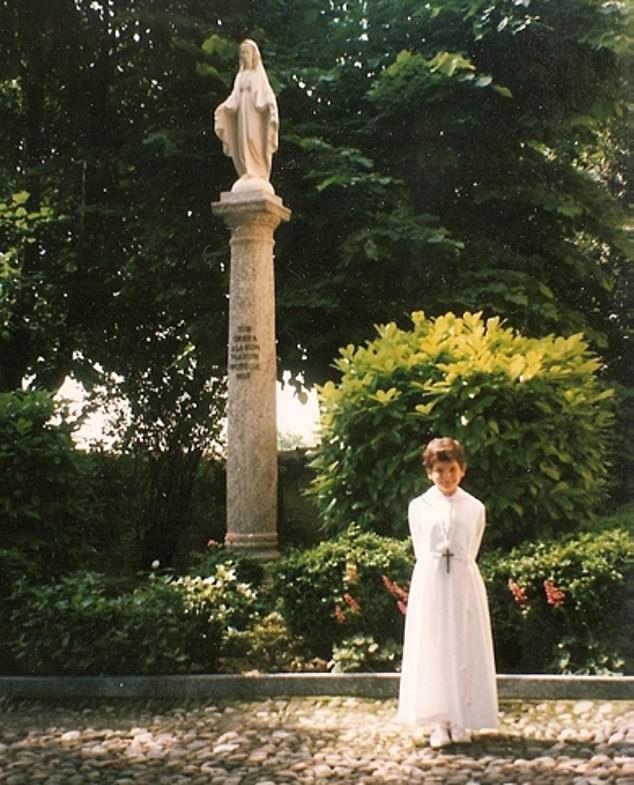 Carlo (pictured) would be only the second Briton to become canonised in nearly 50 years, after Cardinal John Henry Newman was made a Saint last year 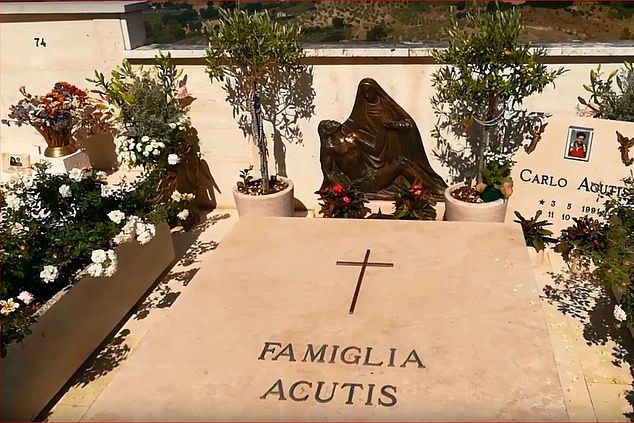 Beatification is the fourth out of five stages in the process of becoming a saint. He was named venerable by Pope Francis in July 2018 which was the third stage. Pictured: Carlo’s grave

‘When he died, at the funeral, the church was full of poor people. Everyone else wondered what they were doing there. Well, Carlo used to help them in secret,’ said Nicola Gori, who represented Acutis’s beatification case.

‘The family knew about it, because his mum would go with him, since he was only 15 years old. He would give them sleeping bags and food, which is why they wanted to attend the funeral’, he added.

Should Acutis later be credited with the second miracle necessary for sainthood, supporters have suggested he could become the Patron Saint of the internet – though there already is one, 7th-century scholar Isidore de Seville.

First Briton to be canonised in nearly 50 years: Who was Cardinal John Henry Newman?

Cardinal Newman was a Church of England priest before converting to Catholicism in 1845 and is seen as a bridging figure between Anglicanism and Catholicism. 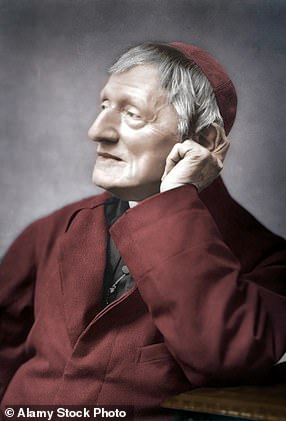 The Cardinal left a ‘lasting legacy’ as an educator, and the Catholic community owed ‘an incalculable debt to his tireless work’.

An Anglican priest, he renounced an illustrious academic career at Oxford University to convert to Catholicism in 1845, convinced that the truth he sought could no longer be found in the Church of England.

The cardinal went on to found the Oratory at Birmingham in 1848 and through his writings spoke to many about the issues of faith, education and conscience.

He was also appointed the first rector of the institution that would become University College Dublin.

In the age when he lived, he was a figure who stood ‘for the life of the spirit against forces’ seeking to lower human dignity – and guided the church back to its Catholic roots.

While at the same time he was open to learning from Anglican traditions such as the role of the laity.

When he died in 1890, thousands took to the streets for his funeral procession. His remains lie in a closed sarcophagus at the Oratory.

‘Newman is very well known in the Church as a theologian, a teacher and an educationalist,’ Father Francis Gavin, from the Birmingham Oratory, told the BBC. ‘But he was also a priest and a pastor. He visited the sick, the imprisoned, and those human qualities of care and friendship are as relevant now as they were in his own time.’

The most recently declared British saint, in 1976, was John Ogilvie, a Scottish martyr who died in 1615.