Police have fired pepper pellets and arrested dozens of protesters in Hong Kong as they try to block politicians from debating a controversial national anthem bill.

Officers clashed with activists in the city-state’s central business district on Wednesday after plans to blockade parliament were abandoned when the area was flooded with armed officers.

Demonstrations have been ongoing in Hong Kong for days as legislators attempt to push through a bill that would make it a crime to mock the Chinese national anthem.

They also take place in the shadow of new laws being pushed through in mainland China to stamp out ‘secession, subversion, terrorism and foreign interference’ in Hong Kong – potentially allowing the country’s feared security forces to crack down on pro-democracy activists.

Those laws will not be debated in Hong Kong after China used a legislative backdoor to bypass the city’s parliament, meaning they will be rubber-stamped by the National People’s Congress in Beijing instead. 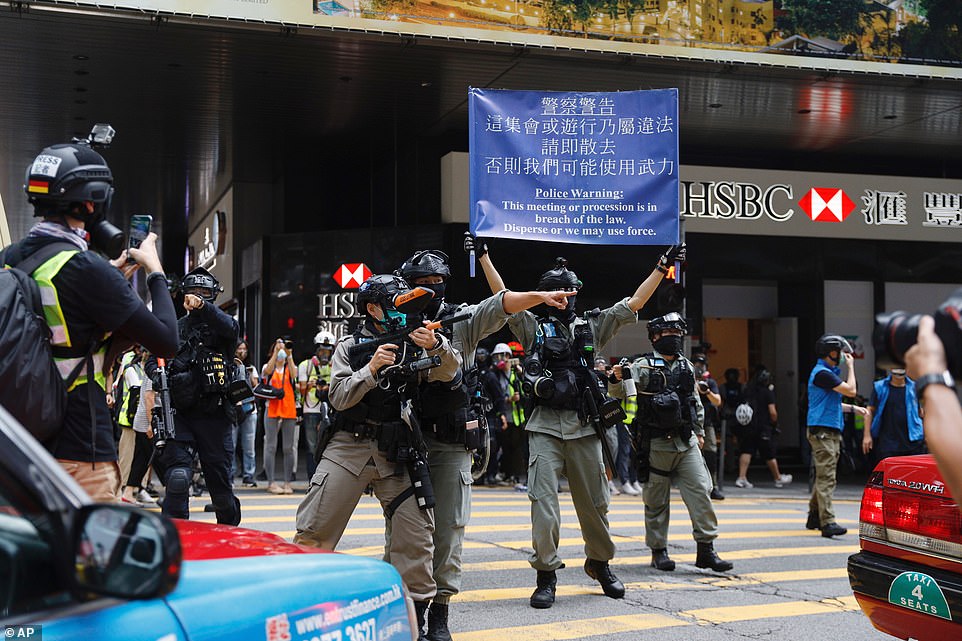 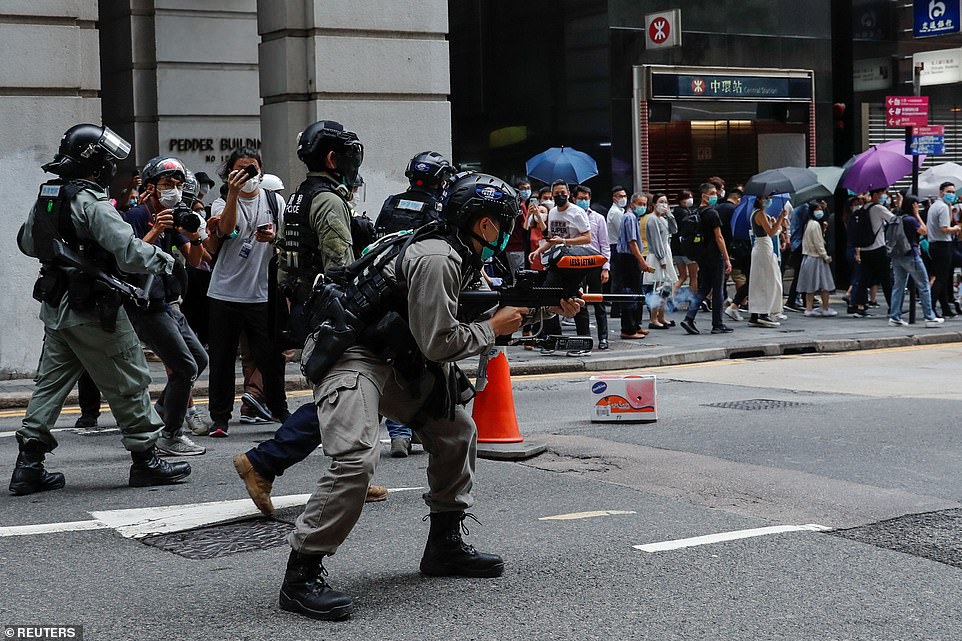 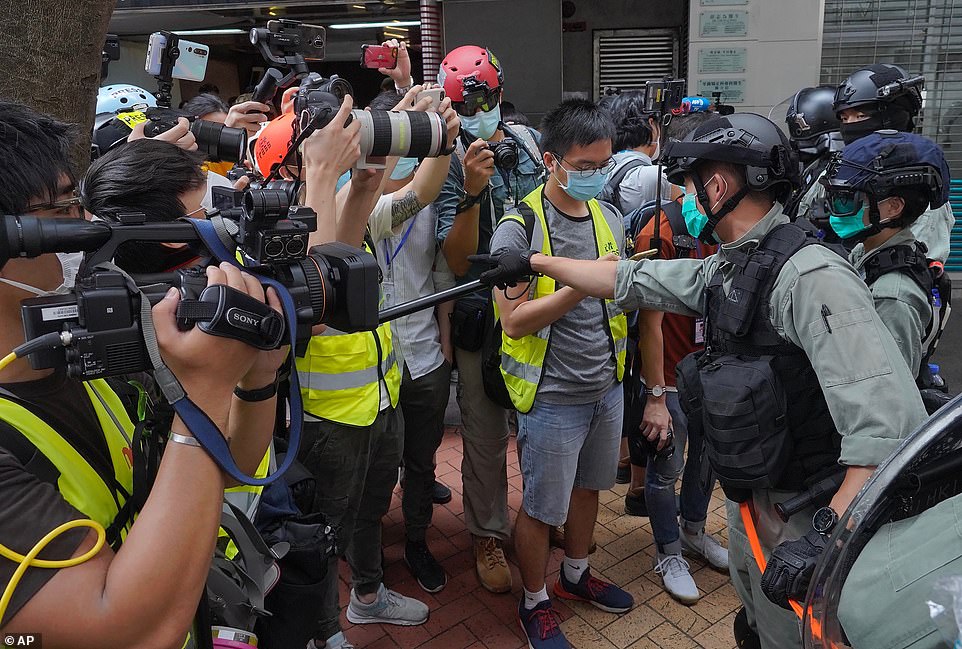 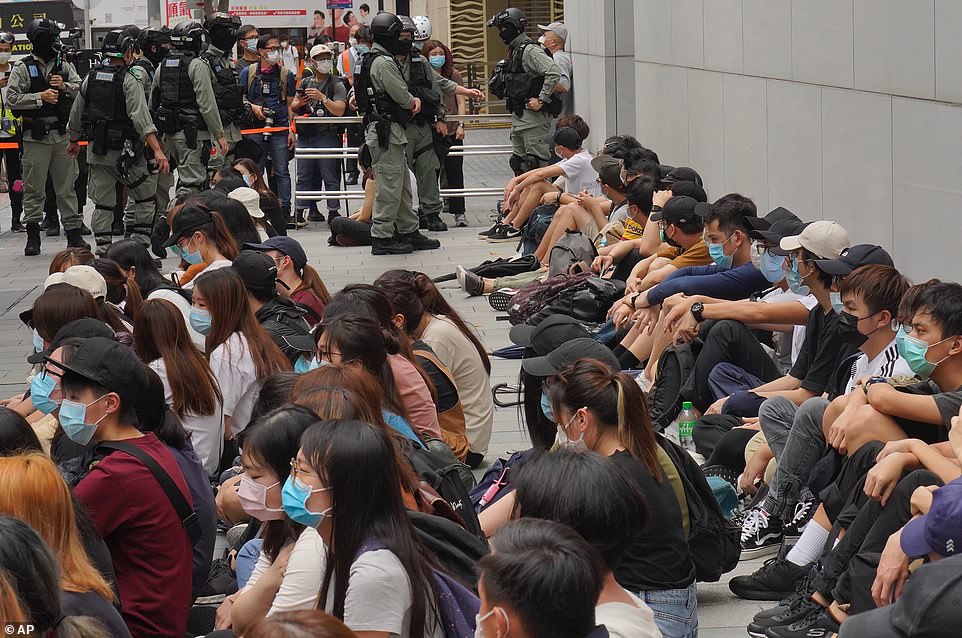 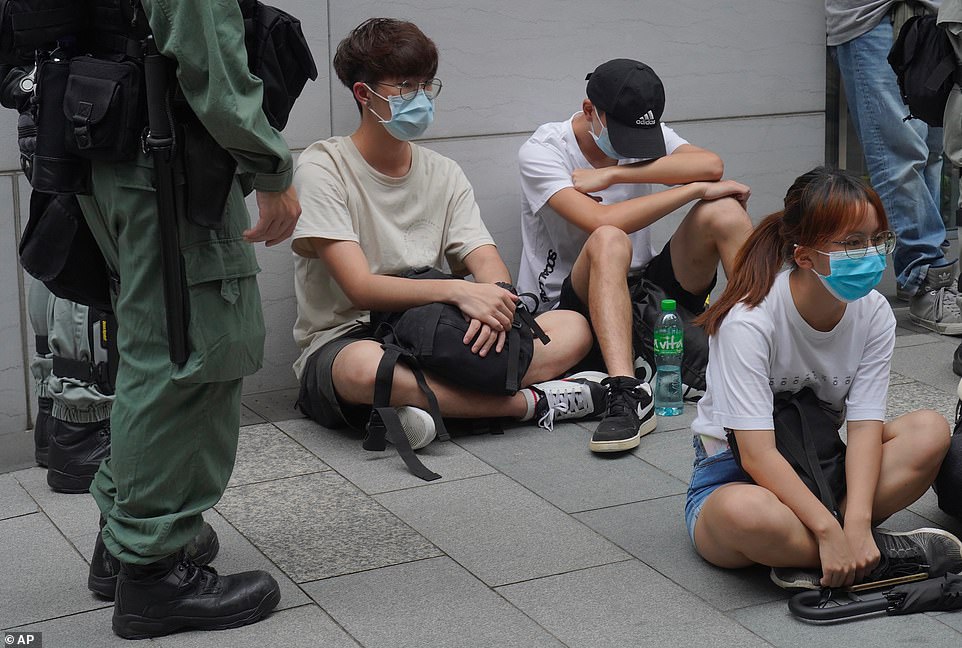 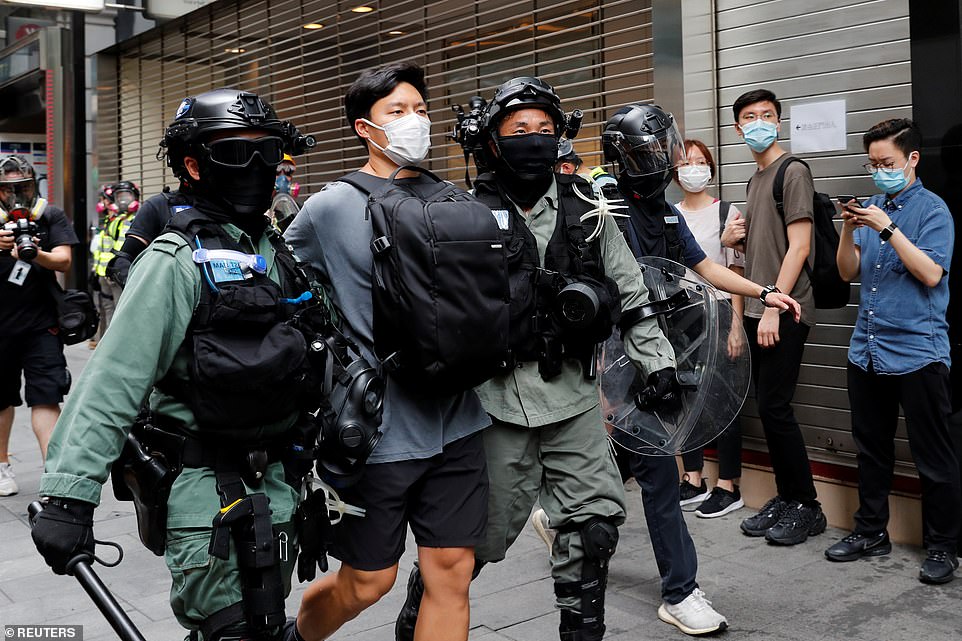 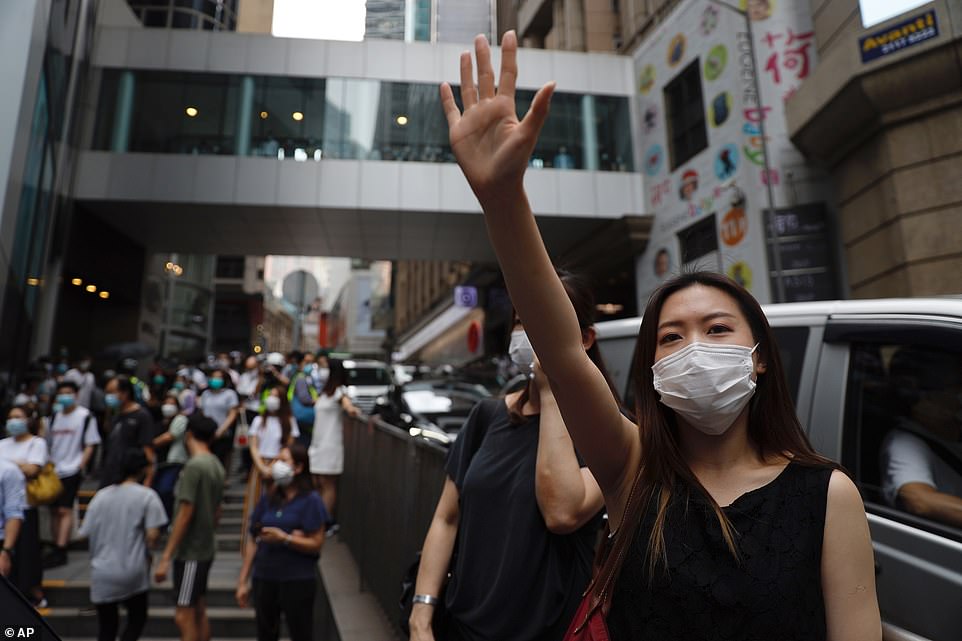 A protester makes a hand gesture referencing the ‘five demands’ of pro-democracy activists, which are: Withdrawal of the bill, investigations into police brutality, release of arrested protesters, for authorities to stop designating protests as ‘riots’, and the resignation of city chief executive Carrie Lam 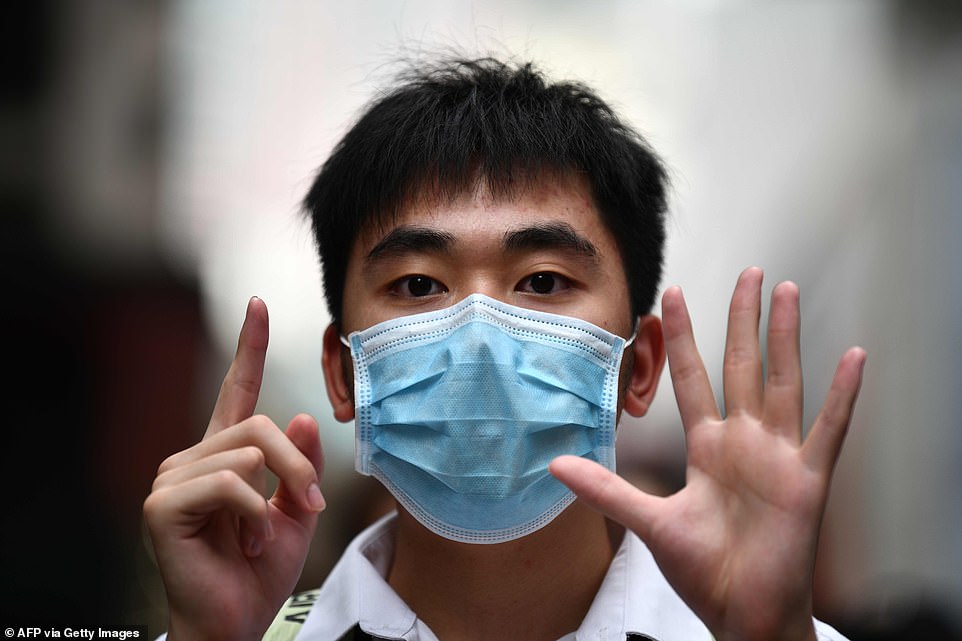 A protester makes a hand gesture intended to signify ‘five demands, not one less’ which has become a rallying cry for Hong Kong’s pro-democracy movement 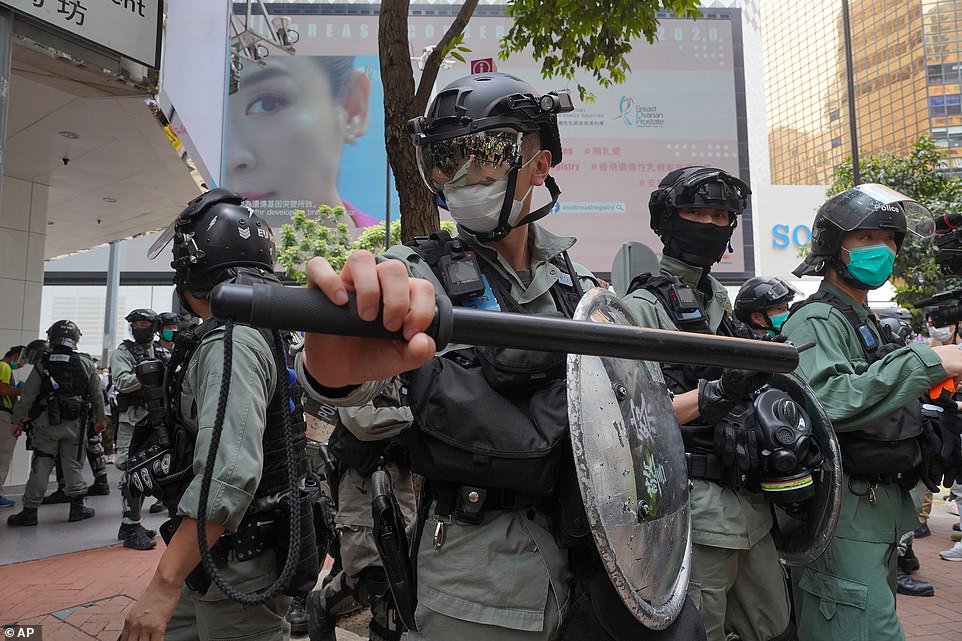 Protesters say the laws are the first step along the road to scrapping the ‘one-country, two-systems’ framework that gives the territory autonomy from the Chinese Communist Party.

It comes a year after protesters successfully blocked the passage of an extradition bill which would have allowed those arrested in Hong Kong to be deported to mainland China.

The demonstrations – the most violent in Hong Kong since it was handed over from British rule – lasted for months and saw students blockade themselves on university campuses and fight police with makeshift weapons.

Fearing a repeat of those scenes, Hong Kong police took to the streets en masse on Wednesday in full riot gear and carry tear gas, pepper bullets, and handguns.

The latest round of protests was sparked last week when – in a surprise move – the central Chinese government said it would develop laws to outlaw secession, subversion, terrorism and foreign interference in Hong Kong.

The National People’s Congress is expected to ratify the bill Thursday, and legislation could be finalized this summer.

Demonstrators fear the bills will pave the way for China to station its state security officers in the city, erode the ‘one-country, two-systems’ framework that gives Hong Kong its autonomy. 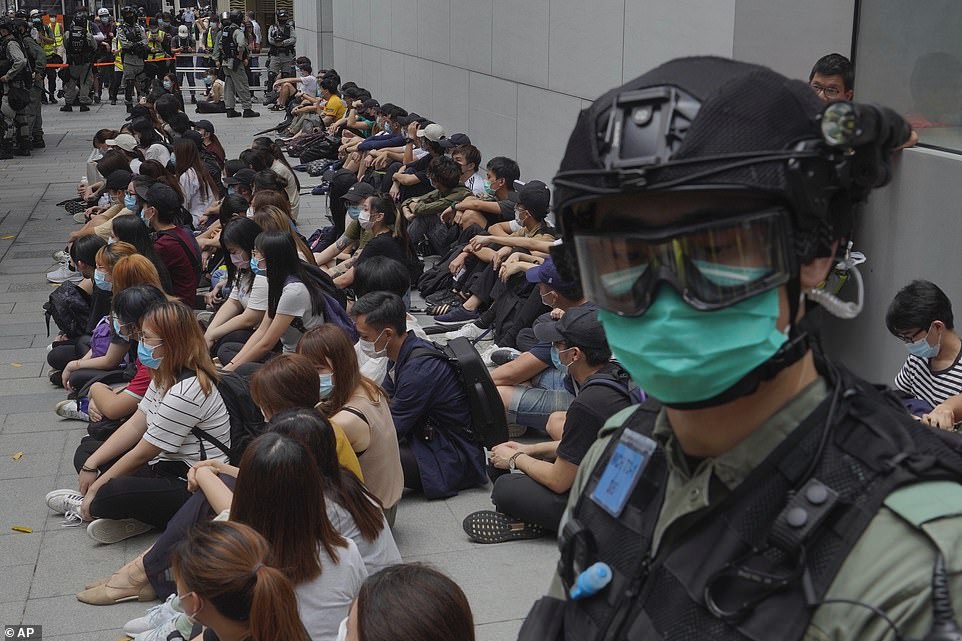 Hong Kong riot police guard arrested pro-democracy activists in the central district, after demonstrations were pushed away from the city legislature by armed officers 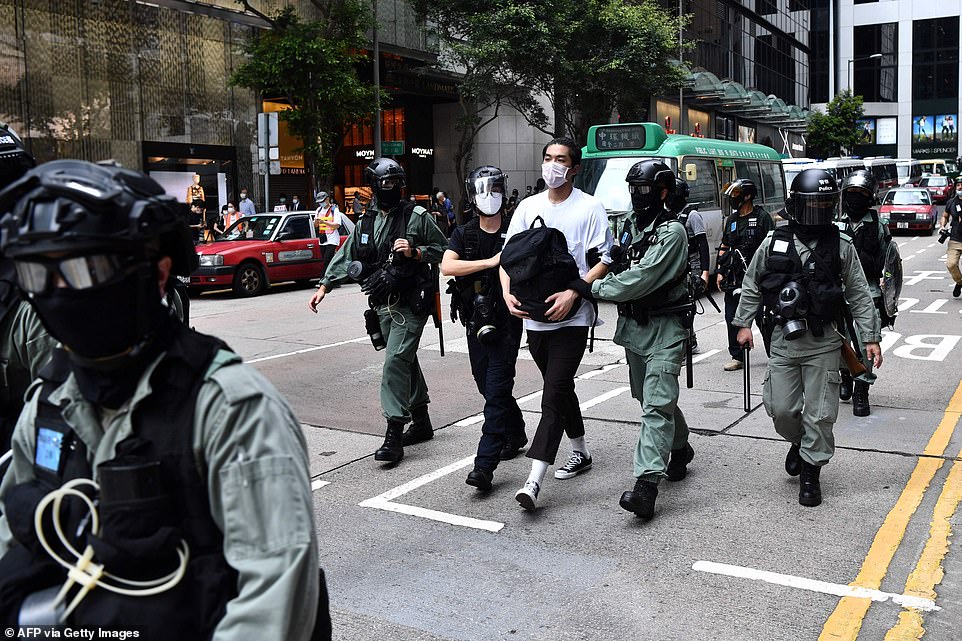 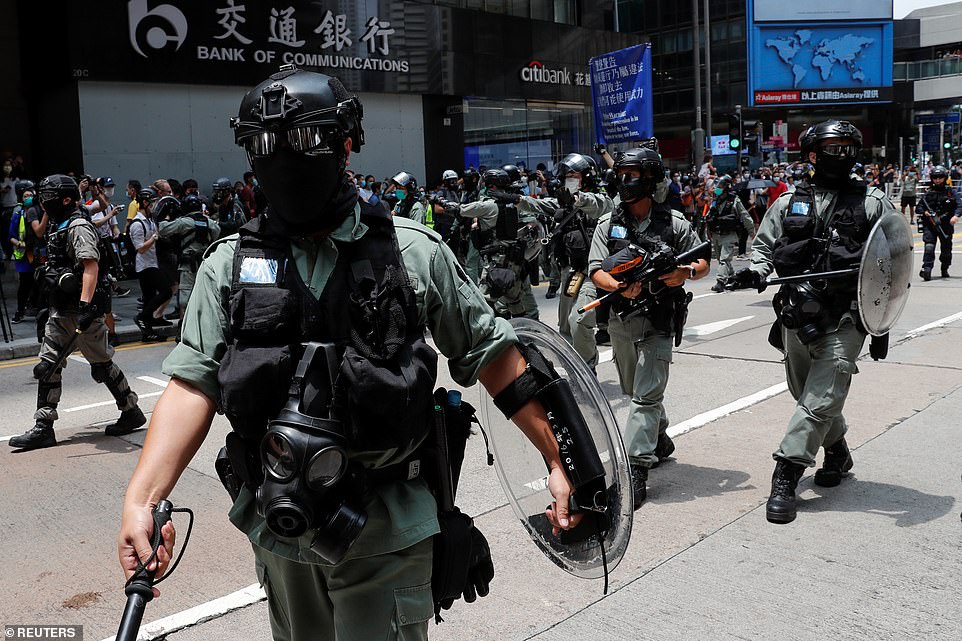 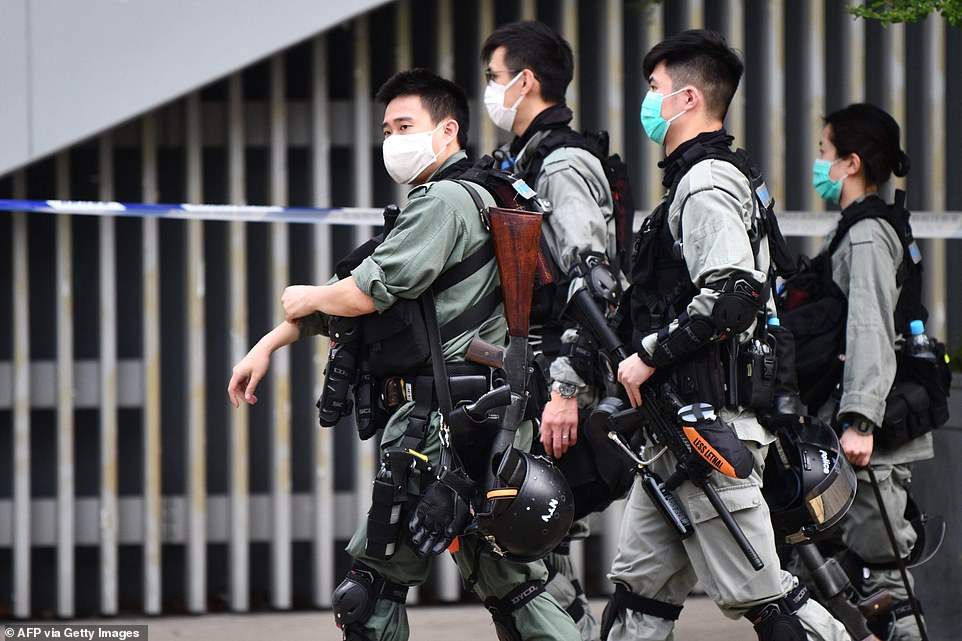 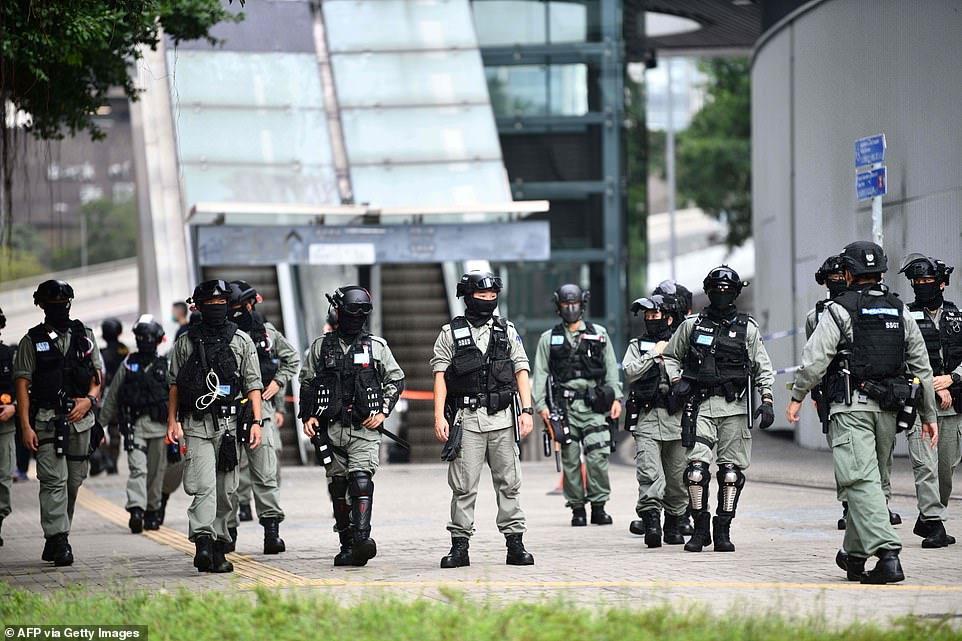 Police officers crowded the streets outside Hong Kong’s legislative building on Wednesday, thwarting plans by protesters to block politicians from getting inside to debate the national anthem bill 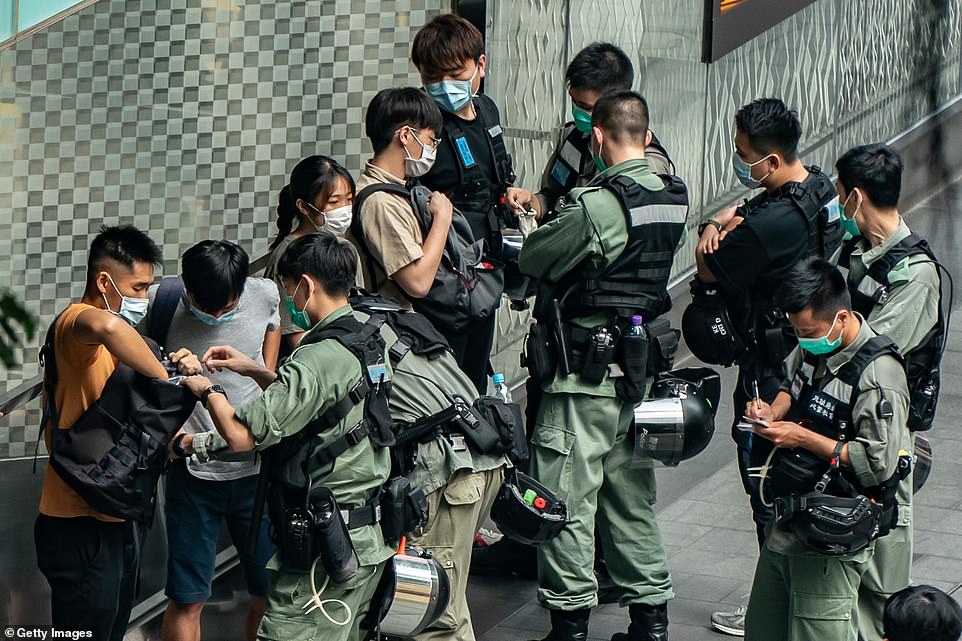 However, the exact details of the new laws have yet to be published, meaning protests have so far been muted.

‘There are still a lot of important questions we have, which have not been answered,’ said Joseph Cheng, a political scientist and veteran of Hong Kong’s pro-democracy movement.

The proposal the Congress is set to approve is really a guideline for future steps. It tasks the legislature’s Standing Committee, a smaller body with decision-making authority, with developing specific laws at future meetings.

Two items in the seven-article draft are getting particular attention. One is the possible deployment of state security. The other is the bypassing of Hong Kong’s legislature by crafting and approving the laws in Beijing.

The Hong Kong government is required to enact national security legislation under Article 23 of the Basic Law, its constitution, but has been unable or unwilling to do so because of opposition. An attempt in 2003 was abandoned in the face of huge protests.

China dropped its bombshell the day before the opening of the annual National People’s Congress last week. In the wake of last year’s protests, the most violent since China took back the former British colony in 1997, it said it was stepping in.

Technically, the central government can do this, but it doesn’t look good. Article 18 of the Basic Law says that the congressional Standing Committee can add laws on defense, foreign affairs and other matters outside Hong Kong’s autonomy. National security falls into that.

For Cheng and others in the pro-democracy camp, the move is the latest in a series of steps that mean the end of ‘one-country, two systems.’ But, he said, ‘We have to admit that this is legal.’ 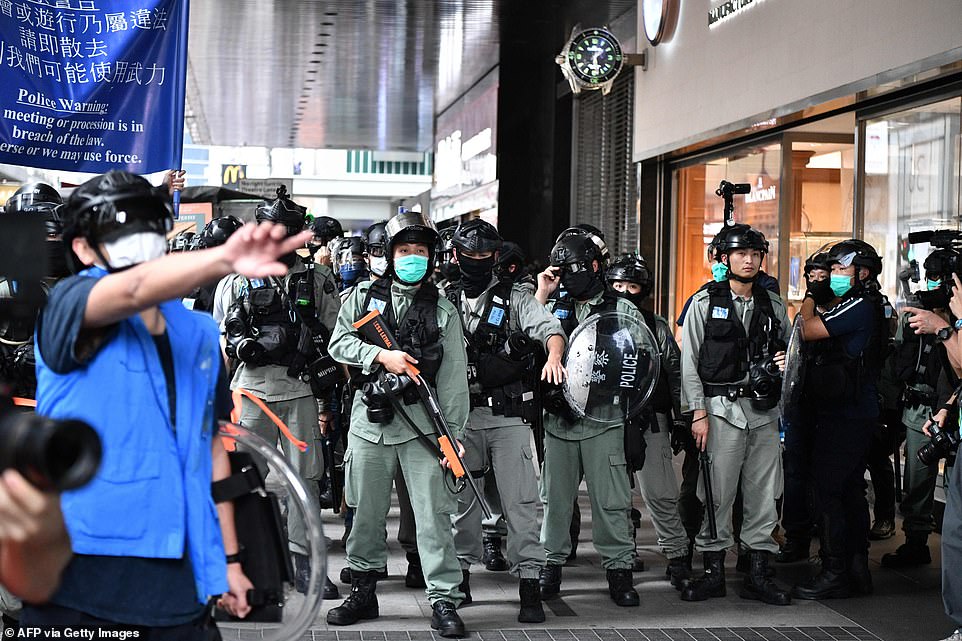 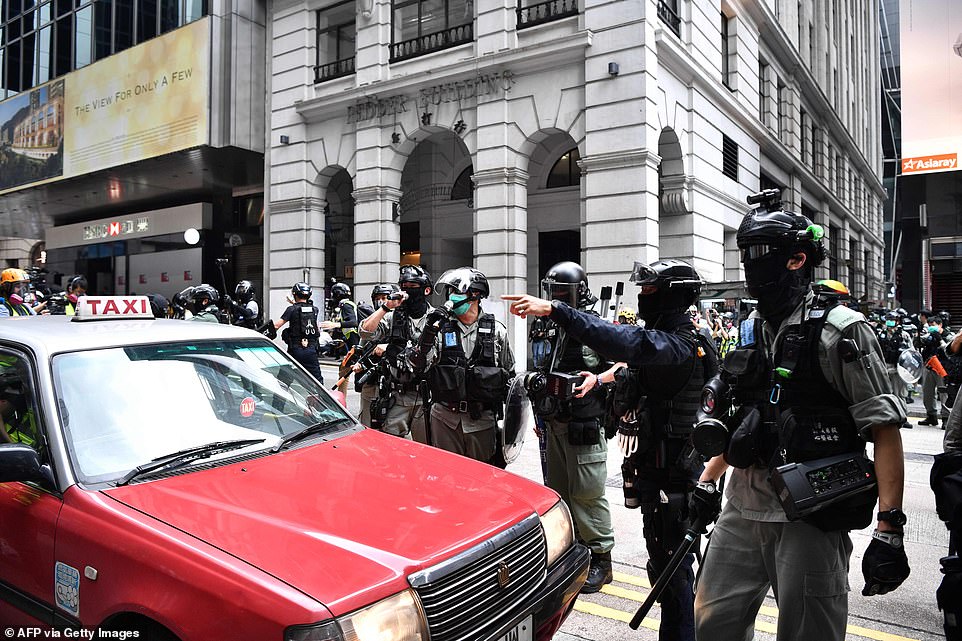 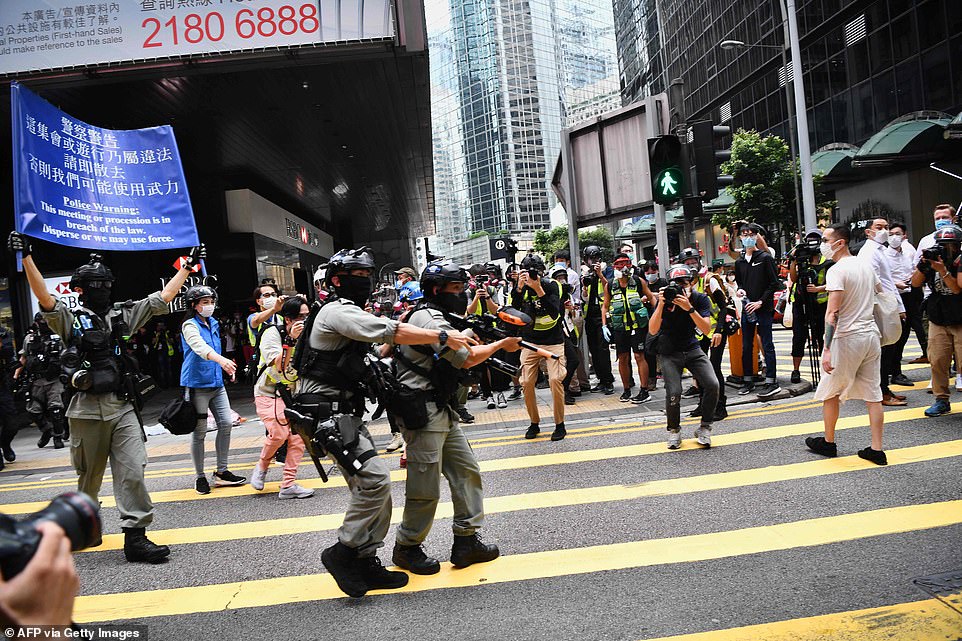 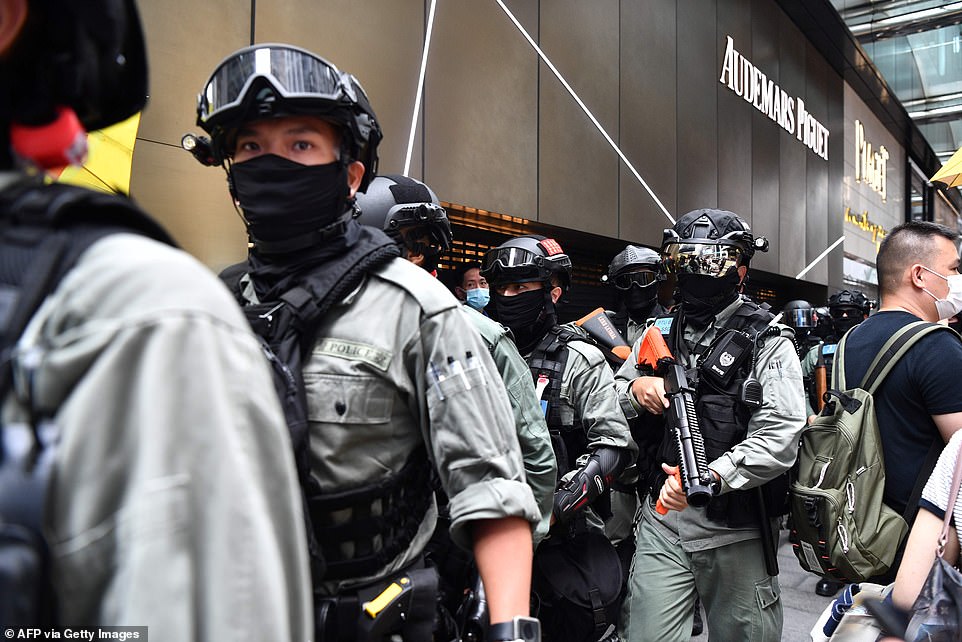 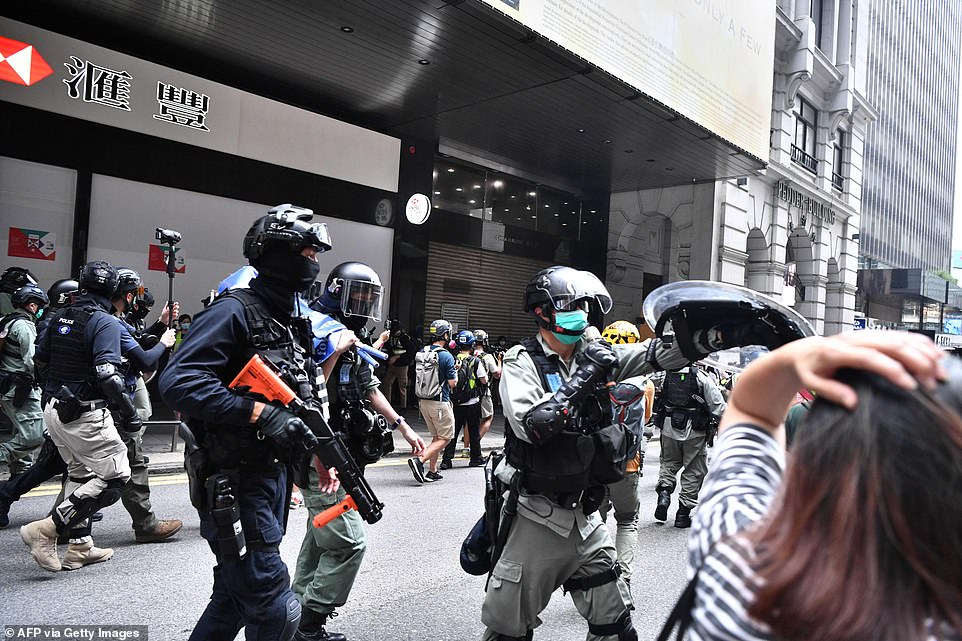 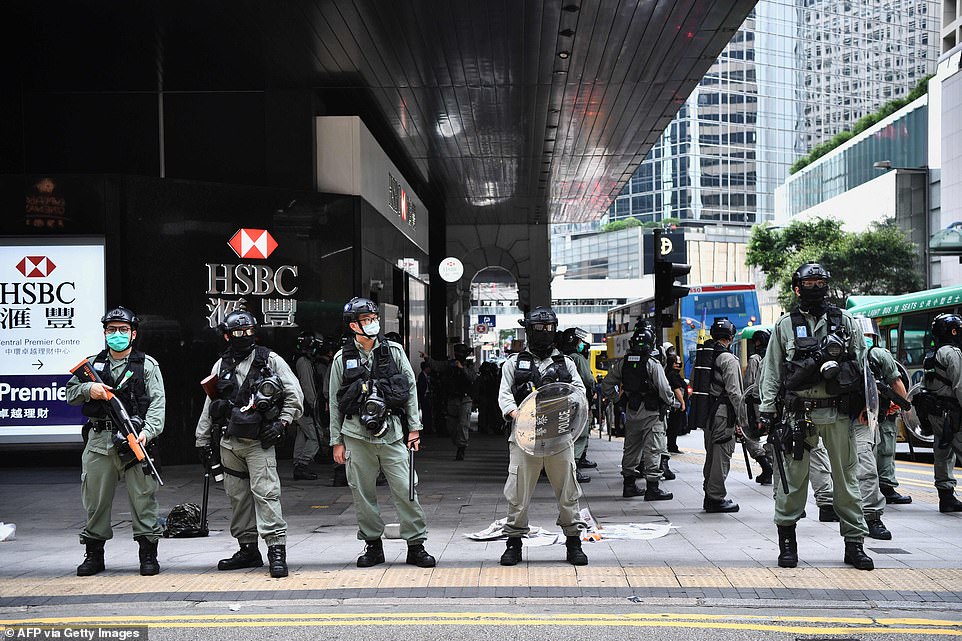 After the initial announcement, the biggest shock came in Article 4 of the proposal, which reads in part: ‘When needed, relevant national security organs of the Central People’s Government will set up agencies in (Hong Kong) to fulfill relevant duties to safeguard national security.’

Speculation swirled. Would Chinese police be able to arrest people in Hong Kong? Would arrested protesters be questioned by both local and national police?

‘This may be worrisome. It depends on what the bill says about what powers these people have,’ said Albert Chen, a constitutional law scholar at Hong Kong University and member of a committee that advises the congressional Standing Committee on the Basic Law.

‘If these people have powers of arrest, of search of people’s home or offices, I think people would find it very difficult to accept that,’ he said.

Details may emerge at upcoming committee meetings in late June and late August.

The protests in Hong Kong and the reaction in Beijing illustrate a fundamental divide that has once again bubbled to the surface.

The freedom of expression and other rights that Hong Kong residents have under ‘one country, two systems’ allow for protests and public criticism of the government. It can, at times, be messy.

China’s ruling Communist Party sees stability as vital to maintaining its grip on the country, including the territories of Hong Kong and nearby Macao.

‘One country, two systems’ is not about to disappear. Hong Kong will continue to manage most of its local affairs, from taxation to common crime.

But Beijing is poised to wield an increasingly heavier hand when it comes to dissent and any possible challenges to its ultimate control of Hong Kong.